Data from USDA shows that beginning farms are smaller and less financially successful than their more established counterparts—and reveals some surprises. 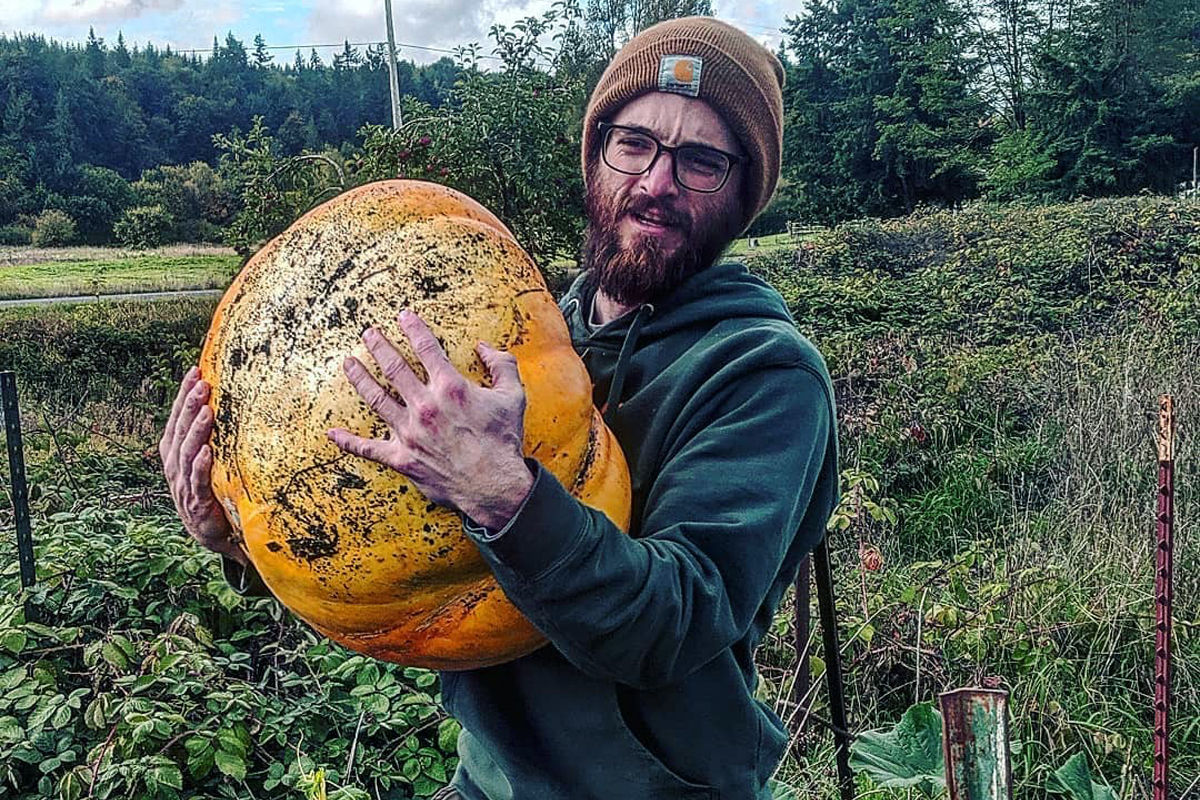 It’s a tough time for farmers across the nation. Many have lost crops or delayed planting due to extreme weather events related to climate change, including flooding, droughts, and wildfires. Total farm debt and farm bankruptcies have surged. A significant amount of farmland is being lost to development, and the average age of the American farmer is still rising.

How are beginning farmers faring in the face of all of these challenges? Reliable data on who is braving the current climate to take up farming, how exactly their farms compare to older farms, and how they’re managing financially can be hard to find.

That’s starting to change. The 2017 U.S. Department of Agriculture (USDA) Census of Agriculture includes detailed characteristics on beginning farms and farmers. This time around, the census also counted all of the operators on farms, which means that some younger farmers working with older farmers were counted for the first time.

And, in September, the USDA’s Economic Research Service (ERS) released a report that provides new details and context—by illustrating how farms owned by new farmers compare to older, established farms in terms of important characteristics like size and income.

Coincidentally, the report dropped in the midst of the outcry over the Trump administration’s decision to relocate ERS to Kansas City from Washington, D.C., which resulted in a mass exodus of experienced researchers. As the National Sustainable Agriculture Coalition pointed out in a blog post, “This report is just one example of the critical research and insights that ERS develops and provides to food and farm stakeholders and policymakers across the country. USDA’s proposed relocation of ERS…threatens the continuation of many publications on topics ranging from food security and beginning farmers to global trade and corporate consolidation.”

USDA ERS researchers Nigel Key and Greg Lyons used data from the Agricultural Resource Management Survey (ARMS), which covered 2013 to 2017, to compile the report. ERS defines a beginning farm as a farm on which “all operators have had no more than 10 years of experience as an operator on any farm,” and between 2013 and 2017, the researchers found an average of 339,000 farms fit that definition.

Here are some of the report’s biggest take-aways:

The most illuminating statistics in the report were related to farm finances. Beginning farms had significantly more debt and less wealth; the average beginning farm household had half the net-worth of an average established farm. And two-thirds of the beginning farms were producing $10,000 or less in “output,” a measure defined as the value of production.

“That popped out in my mind,” said Kevin Cody, who has worked with new farmers around the country and is now the farmer training program manager for the New Entry Sustainable Farming Project at Tufts University. “It seems like a pretty large percentage of farmers making a very small amount of money.” 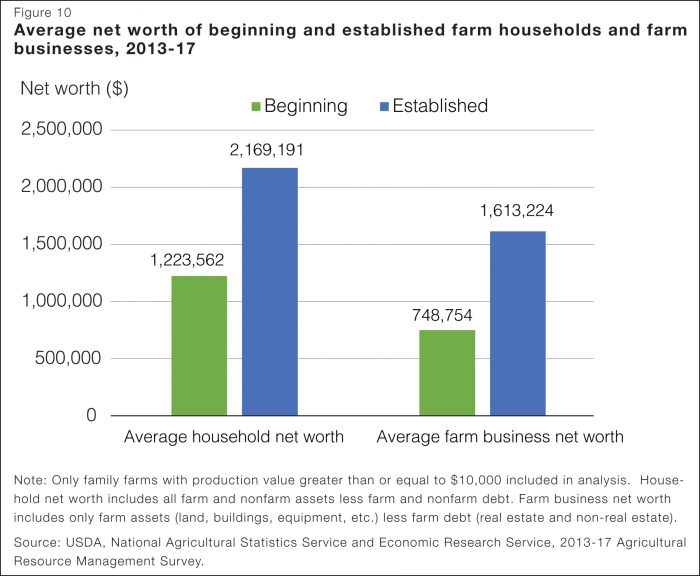 Chris Wayne, the FARMroots director at GrowNYC, has helped create close to 100 farm businesses, many of them owned by beginning farmers who are at an increased disadvantage in the marketplace, including immigrant and Indigenous farmers.

“I will say that for a beginning farmer in specialty crops, a 10 percent net margin even after two to three years is considered good. So if you’re generating $100,000 in gross revenue, you’re talking about something like $10,000 in net profit per year,” he said.

Most beginning farms he works with face three main challenges. “The three legs of the stool that we talk about most consistently here are access to land, access to markets, and access to capital. I’ve been doing this 11 years, and those have remained pretty consistent,” Wayne said. 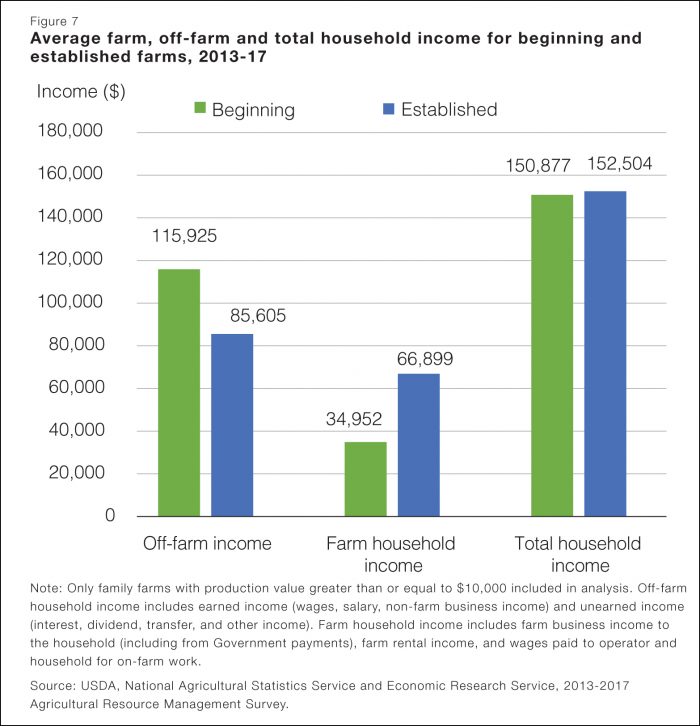 “I was also shocked to see that so many beginning farmers were doing livestock and cash grains,” said Tufts’ Cody. “In my experience, most beginning farmers are doing specialty crops like fruits and vegetables.” Fresh produce, which is considered “high-value,” was the third most popular production category on beginning farms, after beef cattle and “cash grains and oilseeds,” which includes corn, soy, and wheat.

That may be because while attention on beginning farmers tends to focus on those with non-farming backgrounds starting small, diversified farms on their own, some of the beginning farmers counted in the report are likely second- or third-generation commodity farmers who inherit land and/or take over ownership of an existing farm. 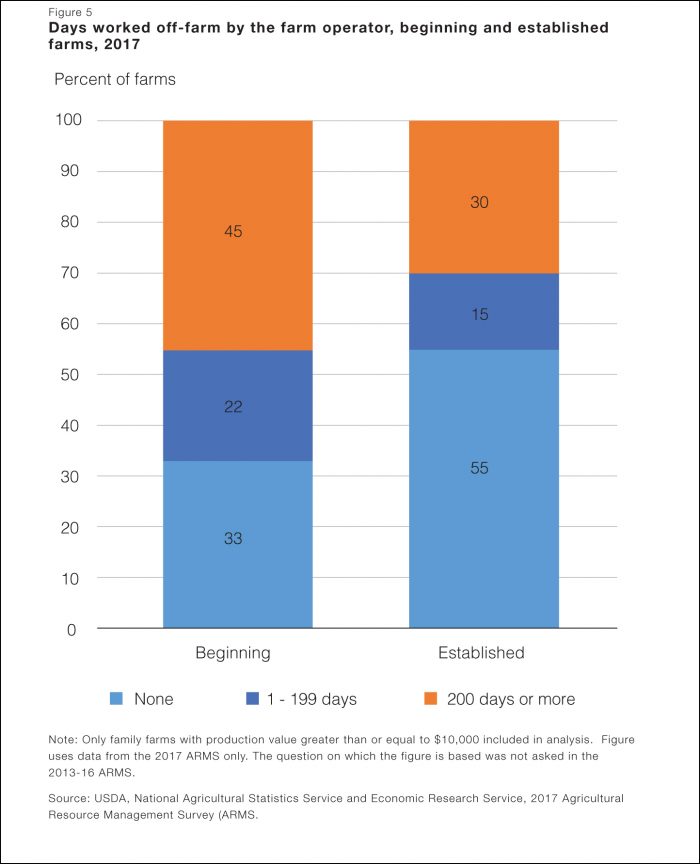 Expanding on the Data and How It Will Be Used

Report co-author Nigel Key said that it would be possible to analyze the data to see which of the beginning farms (cash grains vs. vegetables, for example) are the larger farms that account for a larger portion of production, but that it was not something they looked at for this report.

Meanwhile, Wayne would like more details on how new farmers in socially disadvantaged groups, including people of color, are faring compared to white farmers, and Cody said long-term data is still nearly nonexistent. “One of the things that’s been lacking in a lot of the research on beginning farmers is a longitudinal approach,” he said.

For instance, when a graduate intern at the New Entry Sustainable Farming Project, Lucy Toyoma, analyzed ag census data on beginning farmers, the team noticed that the number of producers farming for five to nine years on their current operation decreased by 25 percent. “Are they cycling out after five years?” Cody wondered. “We get snapshots … and we’re just starting to get some picture of what it means to be a beginning farmer over time,” he added.

Filling in that full picture, he said, is crucial. “[Young farmers’] impact goes beyond their output, beyond how much money they make and the volume of produce they sell,” he said. “They play an oversized role in helping connect people to their food.” 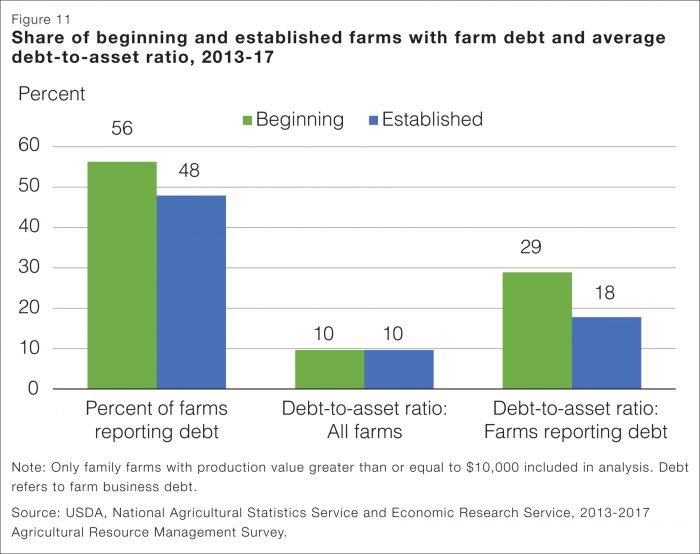