Why do dairy-free diners still have to pay extra for plant-based alternatives? 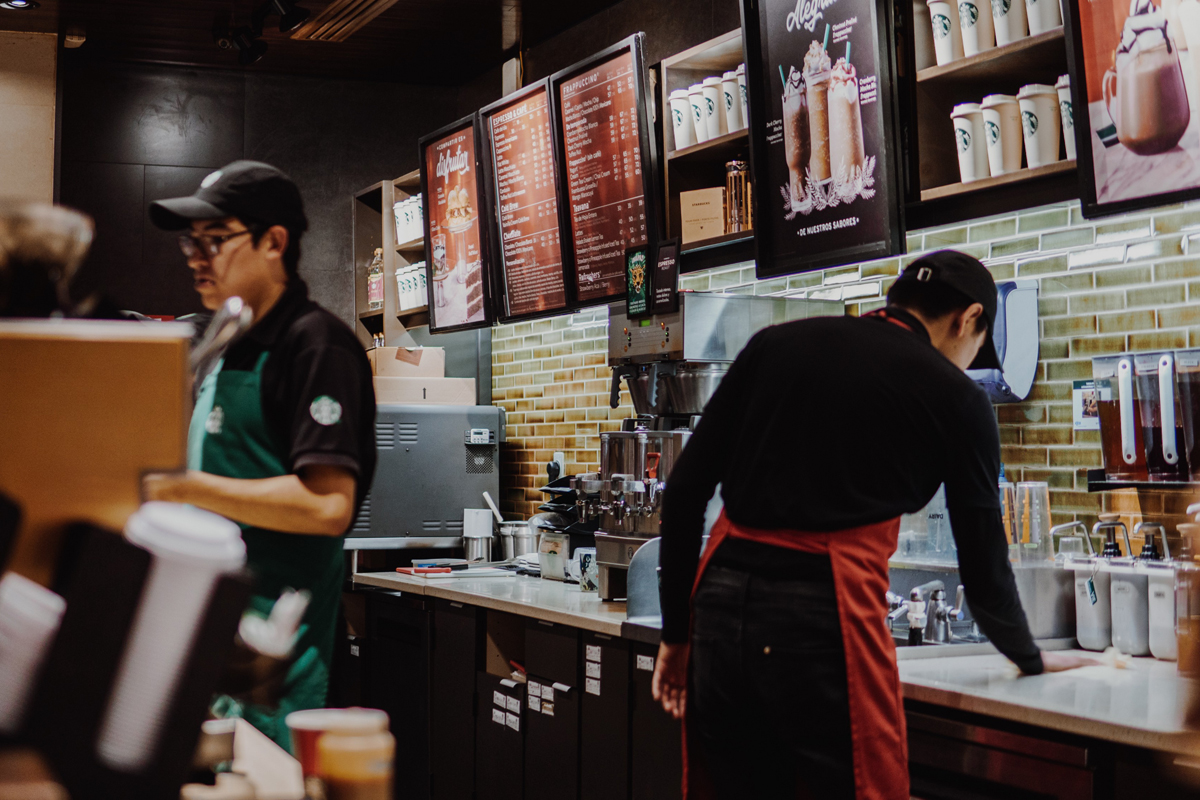 It’s been 15 years since Starbucks started carrying soy milk in its stores in 2004. Since then, we’ve had two new presidents, we found out Pluto wasn’t a planet, and weed became legal in 10 states. So much has happened. But for some reason, we’re still being charged extra for soy.

In 2004, the world was much different for vegans. Often, the only plant milks you could find on grocery shelves were in non-refrigerated Tetra Paks: likely rice and soy milks found in the baking aisle. Vegan cheeses were pretty much nonexistent unless you lived in a larger city with boutique nutrition-focused stores or were willing to pay a lot in shipping. And when they arrived, you realized they didn’t really resemble cheese at all.

Though the products available that year didn’t hold a candle to the Miyokos of today, I was just as excited to try the brand-new options then as I am now. Giving up dairy meant significantly reducing my carbon footprint, lowering my risk of breast cancer and saving thousands of gallons of water per year. When anyone gives up dairy, vegan or not, they’re doing a favor to their health, society and the planet. Despite having lackluster options, the mere fact that they existed was cause enough to celebrate.

When Starbucks started carrying soy milk as an option, a whole new world opened for non-dairy folks like myself. They charged an extra $0.80 to switch out dairy for soy milk and I happily bought expensive coffee drinks without thinking twice about the extra charge. “Soy milk is more expensive, so I’ll pay extra,” seemed to make sense. Thankful for being noticed, vegans and lactose-free customers felt included by the corporate coffee giant, not taken advantage of. We knew that this was likely seen as a trend and were happy big companies were jumping in with us.

Now, a decade and a half later, pretty much every coffee shop carries soy milk, many offering almond, coconut, oat and other alternatives as well. We’re in a whole new era, where veganism is not only represented on menus, but we’re specifically sought after as customers. This isn’t an accident. Veganism is growing at a quick rate: The number of U.S. consumers who identify as being vegan increased about 600 percent between 2014 and 2017, and a much larger percent of Americans are sometimes choosing plant-based alternatives despite not claiming the lifestyle. Corporate giants like Tyson and Hormel are investing in and releasing their own plant-based meat alternatives and now, plant milks are snatching up about 15 percent of overall “dairy” sales.

Despite these immense changes, though, vegans are still being individually charged for replacing dairy with plant alternatives. In fact, we’re being charged a lot. On average, you can expect to spend somewhere between $0.50 and $1.00 extra for every latte and up to $5.00 for every pizza you veganize. It may not seem like much, but for many people, that cost can add up to hundreds of dollars per year.

I’m not asking to be charged less than what my meals or drinks actually cost. I’m asking for the costs to be rolled into one, like they do for coffees and other food groups, instead of being charged an extra fee on top of what is a fixed cost for everyone else. Coffee beans themselves are sold at different rates, depending on their origin, current market value, and type. However, you’d be hard-pressed to find a coffee shop that charges a different price for each type of brewed black coffee. When building their menus and deciding on pricing structures, restaurants and shops add up all the ingredients and average out their operating costs across the general menu set. They do this in order to make the most amount of profit and to avoid charging $20 for some meals and $5 for others: many of us would be surprised to see what the actual costs were at most restaurants for similarly priced meals.

Pizza is a great example as well. Bell peppers cost more than twice as much as onions but are always included together as one fixed price on pizza menus, each costing around $0.50 to $1.00 to add to a pizza, with no differentiation in price despite costing different amounts for the restaurant. I doubt that many people have ever questioned this discrepancy.

So what if we did the same with plant milk?

The monetary cost isn’t all I’m worried about. Seeing your food as something abnormal really takes a toll on customers — vegans, those with gluten intolerance, and people with allergies often feel like unappreciated outsiders and that our patronage is inconvenient or hurts the company we’re supporting, rather than helps. To a cynic like myself, it often feels like I’m not just being charged because my food costs more, but because they rely on that extra charge to increase profits.

The discrepancy between what some shops charge and what others do is enormous, and illuminates how the upcharge is disconnected from economic realities. Customers are charged anywhere from $0.25 to $1.25 to sub in a vegan dairy alternative. This doesn’t even correlate to the actual price difference between the two, which is generally around five cents per 12 ounce latte (based on quick research of national averages of costs of dairy and soy milk). And vegan coffee shops, where they sell nothing but plant-milks, seem to be doing just fine: Chris Rios, who owns East Austin Coffee, a 100 percent vegan shop, says “I feel that our costs are about the same. Even though we don’t charge extra for plant-based milk, we are competitively priced versus other premium local coffee shops.”

Extra charges have a place: when you’re purchasing more. An additional cost for ordering avocado on your burger, cheese on your fries, or a pump of vanilla syrup in your latte makes sense. But when we order a latte with plant-milk, we’re switching out an ingredient, not doubling up the size of our drink.

Perhaps if plant milks weren’t an extra charge, more customers would try them. When companies charge an extra fee to individual customers, they’re alienating vegans and making a plant-based choice less desirable for non-vegans. Nolan Green, the owner of Machine Head Coffee in Austin, sees a third of his customers ordering drinks without dairy, and he recently ditched the extra charge for plant milk after seeing a popular post on Instagram that called the extra charge into question. He says even though most of his customers aren’t vegan, he views it “as an opportunity to reach someone who is reluctant to try a plant-based product.”

Compelling restaurants to absorb costs for more ethical options isn’t unprecedented. In fact, it’s something some activists have accomplished. Working with local governments and inspiring small feats of change at the societal level, environmentalists have made it pretty much an abomination to serve food and drinks in Styrofoam containers, which take 500 or more years to decompose. At many restaurants in larger cities, customers expect their takeout containers to be made from compostable or recyclable materials. In some cities, like Seattle, it’s the law. And the cost of switching to compostable materials is heavy: over twice the cost of less environmentally-friendly products. Restaurants aren’t switching to earth-friendly material at their own loss, either: they’re passing on the cost to customers within their menu set, and not externally, which is exactly what they should be doing with vegan alternatives. Perhaps environmentalists have achieved something vegans haven’t quite mastered: the art of making these issues everyone’s business.

Is it so easy, though? When we see restaurants willingly changing their menus to accommodate some causes, but not vegan ones, it’s easy to think they simply don’t care about the harm dairy does to human bodies, animals’ welfare, and the environment. But it’s more likely that they simply don’t see a reason to stop charging extra since no one is really complaining about it. If it doesn’t seem to be broken, why fix it?

So, should we be thankful that businesses offer non-dairy alternatives at all? Yes, absolutely. We should celebrate companies who recognize the market for more ethical ingredients. But when we forget that businesses exist to serve the needs of their consumers, we sell our buying power short. Robbie Lordi owns Li’l Nonna’s Pizza in Austin, Texas, which switched to an all-vegan menu about a year ago in 2018. His advice to other restaurants? “If you are trying to bring vegans to your restaurant, I highly suggest not up-charging non-dairy options. You are actively including a whole new customer base that may not have had another reason to patronize your business. I get “not needing” to attract vegan customers, but what I find most objectionable is when the up-charge is disproportionate to the cost. That’s when I really feel like it’s a vegan tax. A lot of places seem to go very light on the vegan cheese, but not so light on the up-charge for it.”

Starbucks didn’t start offering soy milk to its customers as charity. They were meeting the ever-increasing demand for plant milks; a demand that has only intensified as time has gone on. In a recent poll by Ipsos-mori, over 50 percent of American consumers stated they purchased plant-based milk alternatives. Instead of simply being appreciative of corporations who offer these alternatives at an upcharge, we should be alarmed that they’re not absorbing the costs into their menu sets after years of data has proven that plant milks are the future, and not simply a trend. 15 years is too long. Vegans and our plant-based alternatives are not going away, but the vegan tax should.

This article originally appeared in Tenderly and is reprinted with permission.