Climate Change Is Making the Future of Cranberry Growing Uncertain

The unpredictable effects of climate change on cranberries are creating ups and downs and troubles for the industry’s growers. 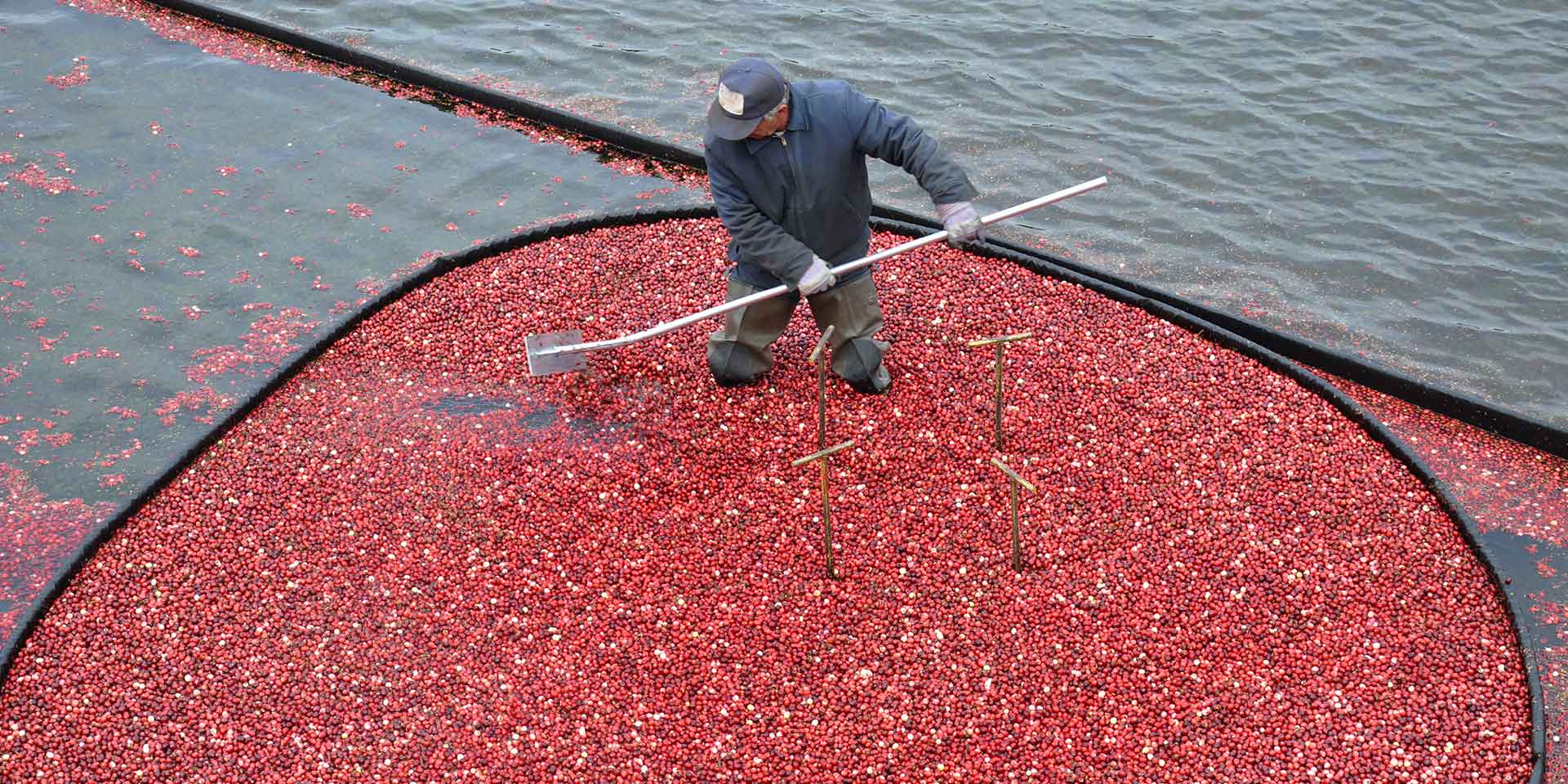 This article was originally published by FoodPrint, and is reprinted with permission.

One morning in mid-September, Jed Colquhoun, an expert in fruit and vegetable production systems, hopped on the phone to discuss the state of cranberries and climate change in the state of Wisconsin, our country’s most bountiful producer of that tart indigenous berry.

“Today’s a great example of what we’re dealing with,” he said from his office at the University of Wisconsin-Madison, where he teaches and conducts research. “A hundred miles northwest of me, towards cranberry country, some areas just got six inches of rain. That’s two Septembers’-worth of rain in a morning.”

Since whatever public consciousness exists of the cranberry industry likely starts and ends with a flooded marsh (a.k.a. bog, if you hail from Massachusetts, our second top cranberry-producing state), a day of downpours may seem a shrug-worthy affair. But as Colquhoun explains, everything from how farmers could (or couldn’t) complete scheduled work, to whether soil remained intact in the runoff, was impacted by this weather anomaly.

In fact, unseasonal deluges are just one of the many variable effects of climate change on cranberries that are “creating ups and downs and leading to an inability to predict the weather, which is very troublesome for the industry’s growers,” Colquhoun says.

This doesn’t mean there’s likely to be any shortage of cranberries for sauces and pies this Thanksgiving. In fact, the industry is digging out of a glut whose affects started to be felt in 2017, thanks partly to growers adding acreage to meet a past increase in demand. But, says Katherine Ghantous, research associate at the University of Massachusetts’s Cranberry Station in East Wareham, when it comes to the longterm health of the cranberry business, “We are worried.”

Cranberries are an amazingly hardy fruit that thrive within an optimal cold-producing range that stretches latitudinally from Canada to New Jersey; in addition to Wisconsin, they’re also grown commercially in Oregon and Washington. Like grapes, they grow on woody vines. Like lowbush blueberries, they prefer acidic, sandy soil. Like both these fellow North American natives, they can stay productive for a long time under the right conditions.

“We actually don’t know how long they’ll live,” says Colquhoun. In both Wisconsin and in Massachusetts, 100-year-old cranberry vines are still bearing fruit and “don’t have an endpoint that we know of.”

Cranberries do have special needs, though. One is several acres of supporting wetland or forest for every acre of marsh, to store water for cranberry production and filter out impurities. Another is “chilling hours,” accrued during winter’s frigid dormancy period. Yet another is ice, a thick covering of which helps protect those still-growing vines from cold — in Wisconsin, temperatures of -40 degrees Fahrenheit are common. Ice also makes it possible for growers to drive buggies over their marshes every few years to spread sand, to rejuvenate the vines and control pests.

Unsurprisingly, erratic weather is a threat to the delicate balance between what a cranberry vine requires and what it receives from its surrounding ecosystem.

Water Irregularities: For starters, no amount of deluge, which only temporarily wets the soil, can temper the needs of a marsh for consistent water levels in its surrounding lands, which is something that used to be a lot more of a given. “Annual rainfall totals might be higher, but epic, less-frequent downfalls mean we have to change the ways we irrigate our crops,” says Ghantous. Since cranberry marshes are flooded for ease of harvest — the low-to-the-ground hollow berries float — “changes in available water change the way we harvest, too.”

Fluctuating Temperatures: There’s also the issue of how fluctuating temperatures affect numerous interrelated species. For example, earlier springs or later winters mean ecological mismatches—times when a cranberry plant may flower to find no bees available to pollinate it or, conversely, insects hatch too early to find forageable flowers.

Less cold and less consistent cold have their own ripple effects. “Lots of invasive species, like kudzu, are moving north so there’s a chance we could have an influx of new pests, weeds, fungi, bacteria,” Ghantous says. “Things that were previously nudged out of the region by cold can now sweep in.” In fact, Wisconsin cranberry growers have already been contending with increased insect and weed influxes, according to the Bergen Record.

Loss of Ice: In Massachusetts and New Jersey, where Ghantous says “loss of ice is significant for us already,” growers are sanding by retrofitting manure- or salt-spreaders to drive over dry marshes. Wisconsin still gets good ice but it doesn’t necessarily last the winter anymore; temperatures can veer rapidly from January thaw to polar vortex, exposing crops to inhospitable cold. “In summer, we see winter injury with plants browning and dying off in places,” says Colquhoun. The plants may survive but “there’s yield reduction and overall stress.”

With conditions now difficult if not impossible to predict, growers are scratching their heads about how to manage their marshes from year to year on multiple fronts. And experts like Ghantous and Colquhoun are at a loss for how to authoritatively advise them. “Not knowing what that variability is going to look like over the next 10 years makes it hard to pose a hypothesis that’s testable,” Colquhoun says. “And if we don’t know what we’re mitigating against, we’re being asked for an answer before we see the question.”

Building a Better Marsh and a Hardier Cranberry

That doesn’t mean researchers aren’t trying to piece it all together with what resources they’ve got.

Ghantous says that although money for cranberry-specific studies is more limited than in some other sectors (cranberries are a $2 billion drop in the $1 trillion bucket of U.S. agriculture), the industry is able to draw parallels from ecologists, agronomists, and others looking at the impacts of climate change on similar woody crops with similar growing needs.

She’s been encouraging growers to develop better water management practices, support native bee species, and reduce pesticide use in controlling for insect invaders. “I would hope improving ecological functions would help stave off some of the effects of climate change, but there are so many unknowns,” she says. She’s also been looking south, to New Jersey, the state that contended with warming first and where cranberry specialists have been developing new, hopefully more resilient varietals.

Colquhoun believes that the best hope for the industry might lie in those varietals, even if lower yields are the tradeoff for increased hardiness. But he and his team have also been figuring out how to use machine-learning algorithms to stabilize an industry he says is “wholly based on predictability.” By analyzing what is known — the last time there was a warm February, yields from one year to the next, how pests and soil fertility were managed during past anomalies — they think they can get a handle on where trends might be heading. Colquhoun predicts it will be possible to one day determine optimum care for each marsh, possibly even each bed on a marsh.

A warming climate means agricultural zones are shifting northward, and some farmers of more mobile seed crops, like canola, are picking up and moving. Reports from a decade ago predicted that cranberry farmers might have to follow suit. But Ghantous points out that Canada’s got it’s own cranberry industry; US growers, with their high-needs marshes that are costly to replace, will be staying put and trying to adapt.

And as most cranberry farmers are generational growers “who are thinking about the farms they are going to leave to their kids,” says Ghantous, she hopes wide-ranging best practices will help them prepare for whatever’s in store. “And who knows? Maybe we’ll find that cranberries have more resistance built in than we know.”