Each year, the farm and animal rescue organization in upstate New York celebrates its 400 animals, while connecting people and raising awareness about where our food comes from. 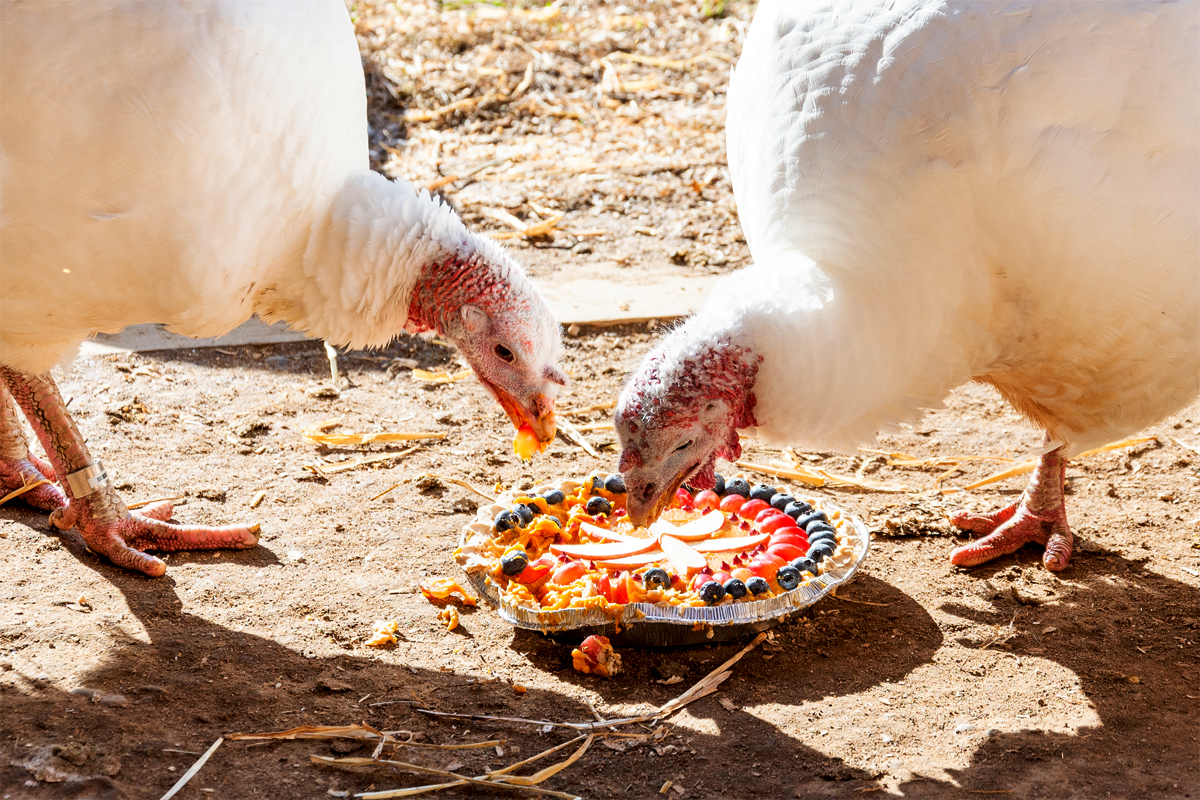 The guests of honor messily and quite literally gobbled down pumpkin pies topped with cranberries at a recent “Thanksliving party.” It was a chilly afternoon in early November and nearly 300 people had gathered for a communal meal at Woodstock Farm Sanctuary, in High Falls, New York. But before they took their seats for dinner, the humans in attendance presented the farm’s 10 turkeys with the special desserts.

The dinner marked the organization’s 14th Thanksliving, an annual celebration that has become its largest fundraising event. Founded in 2004 by Jenny Brown and Doug Abel, Woodstock Farm Sanctuary started as an empty, unfenced hay field, outside of Woodstock, but has since moved closer to New York City, growing to include several large barns, an animal hospital, visitor center, event space, and an inn, where 12 guests at a time can stay, eat a vegan breakfast, and take a private tour of the sanctuary.

The farm is home to turkeys, chickens, ducks, goats, pigs, rabbits, sheep, cows, as well as a llama and cat. Some of the animals came to the sanctuary from animal shelters, others were rescued during investigations of farms, stockyards, auctions, and slaughterhouses, and a number of them escaped food production life, and were eventually brought to the farm. 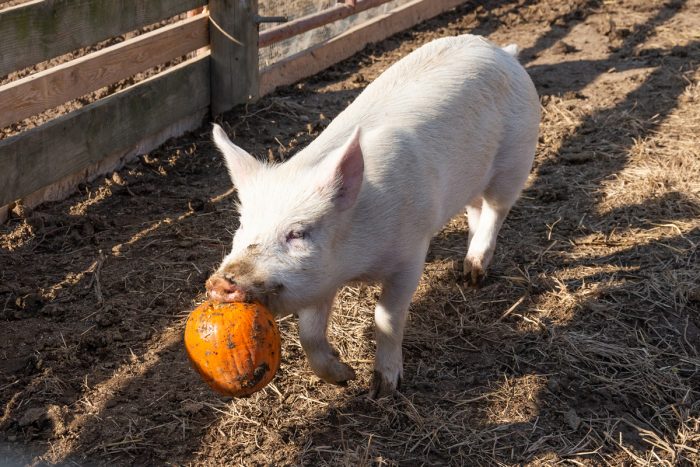 “We are surrounded by beings that really saved themselves,” said McCrystal. “We have a lot that ran from slaughterhouses, farms, or from trucks, got found by kind people, and made their way here.”

While the dinner started as a way to celebrate turkeys in advance of Thanksgiving, when an estimated 46 million of the birds are eaten, it has grown into an opportunity to bring people, whether vegan, vegetarian, or omnivore, together around food and kindness. Attendees come from all over the country, and most have celebrated previous Thanksliving dinners, giving the afternoon an almost familial vibe.

“It’s really a special afternoon to try unique food and have this sensual experience,” McCrystal said. The organization invites chefs to reinterpret the Thanksgiving meal without animal products. “Some have done really traditional and some go off the beaten path,” she adds. 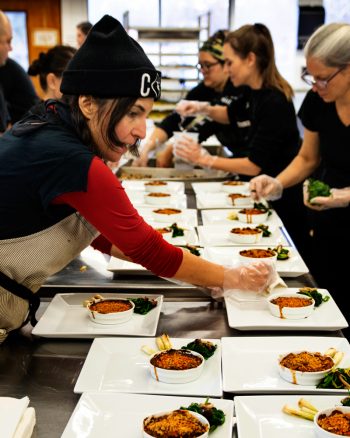 This year, the meal was prepared by Lagusta Yearwood of Lagusta’s Luscious and the Commissary in nearby New Paltz, and past chefs include Rachel Kelin of Philadelphia-based Miss Rachel’s Pantry and Chris Kim and Rebecca Lopez-Howes of Monks Food Company in Brooklyn. They all volunteer their time. Yearwood, who has been involved with the shelter for almost 15 years, created a Japanese-inspired autumnal feast.

“I’ve been fascinated by Japanese shojin ryori cooking, the naturally vegan Zen Buddhist temple cuisine, for years, and I wanted to try to do it justice in this meal,” Yearwood said. “I tried also to show that the building blocks of vegan cuisine—miso, sesame, fermentation, and beautiful local produce—come from this style of cuisine, so I wanted to go back to the roots of vegan cooking in a way.”

Throughout the afternoon, guests were treated to dishes that included baby vegetables in a smoked miso-tahini sauce, a plate of miso-shiitake gravy, buttered negi, carrot stems, potato gratin with shichimi togarashi, and yuzu-dressed spinach. The star dish was a bowl of ramen made of Kabocha squash as well as shiitake, and maitake mushrooms and a creamy, hearty broth.

While vegans and vegetarians make up a small percentage of the overall U.S. population, interest in plant-based foods has explored in the past couple of years. The plant-based food market grew by 20 percent in 2018, and is estimated to reach $4.63 billion in 2019; a third of Americans planned to incorporate plant-based foods into their diets during the year.

While many of the guests at Thanksliving are vegans and vegetarians, there are a growing number of meat eaters in attendance each year, something that Gene Baur, president and co-founder of the Farm Sanctuary, sees at similar celebrations in Watkins Glen, New York, and Los Angeles as well.

“There’s this convergence of issues around awareness of animal welfare—the cruelty of factory farming, the human health benefits of veganism, and the increasing awareness of the environmental impact and the big part farming animals plays in our climate crisis,” Baur told Civil Eats.

More than simply a celebratory meal, Thanksliving at Woodstock Farm Sanctuary also offers guests the chance to meet new animal friends and say hello to old ones. Ralphie, a 17-year-old Holstein, was rescued more than a decade ago with two other male cows from a dairy farm. While, according to the Farm Sanctuary, cows can naturally live for more than 20 years, most dairy industry female Holsteins are slaughtered by the age of 5, after they’ve stopped producing milk, and males are either sold and raised for beef or slaughtered for veal. Ralphie is the oldest animal at the sanctuary. 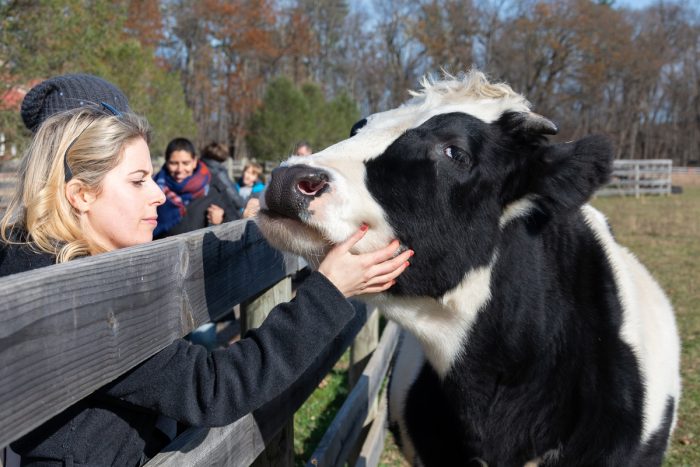 “To think they were going to be thrown away as a byproduct of the dairy industry, and he’s met thousands upon thousands of people and other animals… it’s just so amazing,” McCrystal said.

Thanksliving kicks off the sanctuary’s season of giving during a time when they traditionally spend more money feeding the animals grain and hay and keeping the barns cozy as the winter chill sets in. As Woodstock Farm Sanctuary looks to 2020, McCrystal said they’ll be focusing on advocating for humane treatment of egg-laying hens, welcoming more visitors to the farm, and making people more aware of the opportunity to stay at the farm’s inn. Earlier this year, donations to the sanctuary allowed for the creation the Gray Barn, a five-room guest lodge that allows guests to have a more immersive visit.

Their hope is to host as many as 10,000 visitors per year. Visitors who will be inspired to think about how their food is produced and take action—whether by going vegan, pledging support for rescued animals, or advocating for better animal welfare—after getting to know the animals.