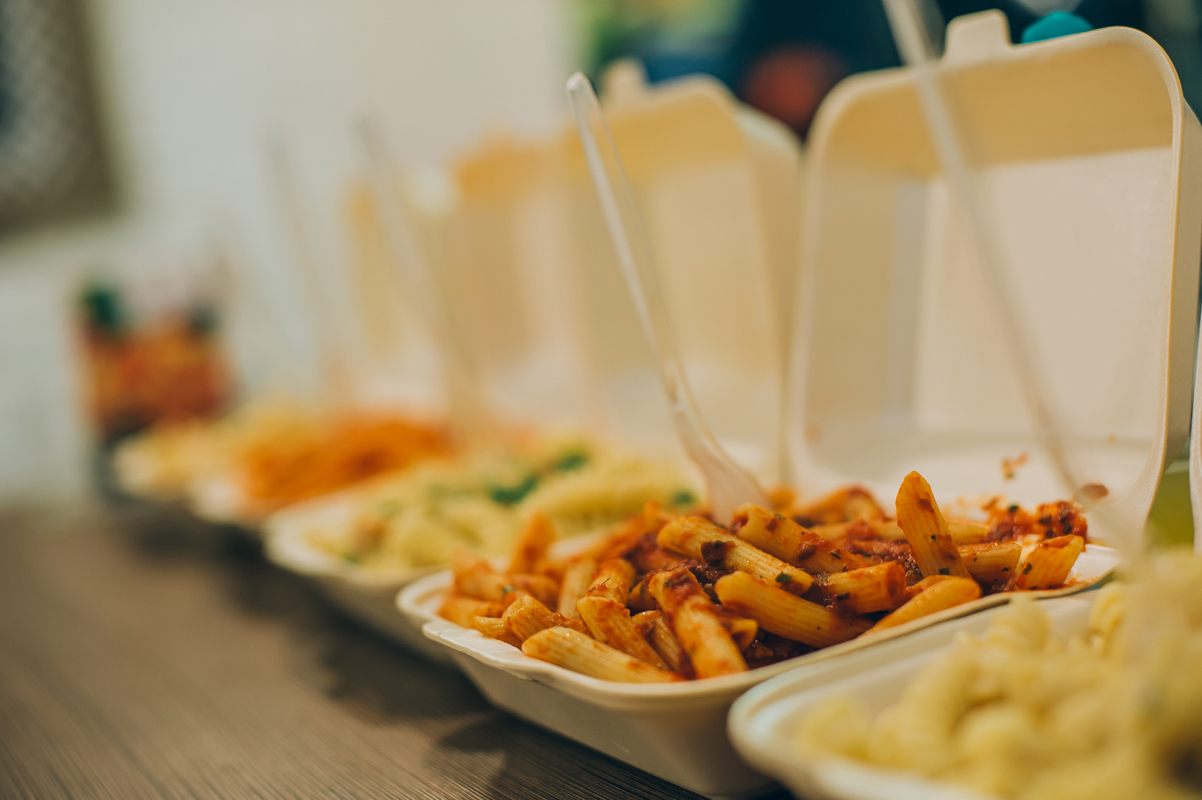 Over the last 15 years, San Francisco-based World Centric has been a leader in the $16 billion environmentally friendly compostable food packaging industry.

The company’s molded fiber and paper-based bowls, plates, and to-go ware have long served as replacements for destructive styrofoam. However, World Centric and the rest of the industry recently learned some shocking news: Some of their products were no more biodegradable than styrofoam because they contained a highly toxic chemical called PFAS, which help the containers repel liquid and grease.

The compound, also called per- and polyfluoroalkyl chemicals, are part of a class of about 5,000 fluorinated compounds that companies like DuPont and 3M have produced for decades. They’re dubbed “forever chemicals” because they don’t break down, and they’re linked to a range of serious health problems.

World Centric isn’t alone. In recent years, a series of studies revealed a large portion of compostable and paper food packaging is contaminated with PFAS. The company acted quickly, however, and is now part of a massive, industry-wide effort to remove PFAS products from their catalogs.

“We’ve been trying to come up with a solution,” World Centric vice president of marketing, Mark Marinozzi told Civil Eats. The company, along with the rest of the industry, is attempting to develop packaging that is similarly grease- and water-resistant. [Disclosure: World Centric has donated to Civil Eats’s fundraisers in the past.]

The packaging industry’s push is part of a larger effort to remove PFAS from the nation’s food supply. Though the PFAS crisis seems to be broadening as the scope of the issue becomes clear, a wide-ranging and urgent response is taking shape.

Some of those on the issue’s frontlines say there’s now reason for optimism. Over the last year, a patchwork of new legislation has banned products with PFAS while simultaneously increasing pressure on businesses to provide safe alternatives. It’s even the focus of a new feature film, Dark Waters, which focuses on attorney Rob Bilott’s fight against PFAS manufacturers, and, in the past week, lawmakers held a hearing to address PFAS and the U.S, Environmental Protection Agency (EPA) announced it will offer $4.8 million to study PFAS’s effects.

“That shows how much more momentum and visibility there is around the issue than there was even two years ago,” said Sarah Doll, national director for Safer States, a group that coordinates regulation around toxic chemicals. “The fact that it’s becoming a high-profile issue is a big deal, and there are some steps in the right direction.”

While carryout food packaging is one of the most direct channels by which PFAS is transferred to food, it’s not the only route. Experts conservatively estimate it contaminates more than 6 million Americans’ drinking water. Tainted water and the use of PFAS-laden sewage sludge—or biosolids—on farmland have contaminated crops and livestock, as have industrial operations and military bases near food sources.

Public health advocates say removing PFAS from the food supply and the wider environment will require two levels of action—physically removing the PFAS that currently exists in the environment, and enacting legislation to “turn off the tap,” or ban PFAS production outright.

“It’s a multi-headed hydra” said Jen Jackson, who manages the Toxics Reduction and Healthy Ecosystems Program for the city of San Francisco, and has been working to ensure that businesses within the city aren’t purchasing PFAS-contaminated products.

‘They’re Going To End Up In Our Food’

PFAS and other “forever chemicals” are used in everything from flame retardants in carpet to non-stick cookware (i.e., Teflon) because they make those products water- and stain- resistant. Those same qualities have also made them attractive to food packaging manufacturers.

Some chemical companies in 2006 reached an agreement with the federal government to phase out some types of PFAS emissions, but the chemicals are still being produced. Among other serious health issues, fluorinated compounds have been linked to cancer, liver damage, immune disorders, pregnancy complications, and much more.

They’re particularly challenging because they’re designed not to break down, and there’s no known way to eliminate them, said Erika Schreder, science director with the Seattle-based advocacy organization Toxic Free Future. That means all the PFAS ever produced is still circulating and accumulating around the planet.

One example of how PFAS travels to food sources is a carpet that’s made with the chemicals that ends up in a landfill and then contaminates groundwater or surface water and ends up in agricultural or drinking water sources. The landfill leaches chemicals that get into the water table and the PFAS travels through groundwater or surface water and into agricultural or drinking water sources. Some landfills send the liquid that leaches from the waste to a water treatment center. And, as Doll explained, chemicals are water soluble and can slip through filters and into drinking water.

The highly mobile compounds have also been found in rain, Arctic snow, and the flesh of animals all around the world. It’s estimated that 98 percent of North Americans have PFAS in their bodies.

“If they’re used anywhere in the world then they’re going to end up in our food because they have a presence in the atmosphere,” Schreder said.

Stopping the Production of PFAS

A 2019 investigation by the New Food Economy found that the compostable, molded-fiber clamshells commonly used in restaurants such as Chipotle and Sweetgreen contained fluorinated compounds. That came about a year after a Toxic Free Future investigation revealed the wide use of PFAS-contaminated packaging at major grocers including Kroger and Whole Foods.

And in 2017, a Toxic Free Future study found municipal compost programs that accept compostable food packaging have much higher levels of PFAS than those that don’t. Around the same time, the Silent Springs Institute revealed that almost half of fast food wrappers that hold items ranging from burgers to pastries contained evidence of fluorinated compounds. About 20 percent of paperboard samples, including French fry and pizza boxes, did as well. 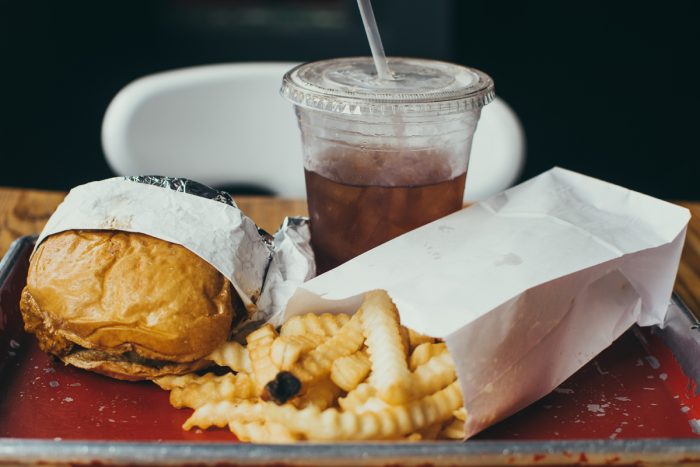 Photo by Christopher Williams on Unsplash

Silent Springs detected compounds in 40 percent of the food packaging it tested, Jackson said, but she’s optimistic about the 60 percent that didn’t contain any. She said that suggests there are alternatives that companies can turn to. However, World Centric’s Marinozzi said PFAS is the only set of chemicals that repel grease on molded fiber, and conservatively estimates that developing a cost-effective alternative will take the industry up to two years.

Since the revelations, the two companies that certify products as compostable worldwide, BPI and Tüv Austria, announced they will stop certifying products with PFAS on January 1, 2020 and businesses are generally open to alternatives because no one wants to sell packaging that harms customers, San Francisco’s Jackson said.

“It’s a heavy lift and it won’t happen overnight,” she added.

In December 2018, Whole Foods announced that it is replacing its PFAS-lined products, while other grocery stores such as Albertsons are also searching out alternatives. Whole Foods issued a statement that reiterated its good environmental intentions when it introduced compostable containers, but added: “Given new concerns about the possible presence of PFAS, we have removed all prepared foods and bakery packaging highlighted in the report. We’re actively working with our suppliers to find and scale new compostable packaging options.”

Notably, there are no enforceable PFAS limits in food or water at the federal level, but some states and cities are moving forward with bans. San Francisco’s ban highlights the role governments can play. The city made an administrative decision to no longer use food packaging or carpeting with PFAS, and a citywide ban on food packaging made with the chemicals goes into effect on January 1, 2020.

“Our role is to change how products are made with our purchasing power,” said Jackson. “If we demand healthy products that won’t be toxic for generations to come, then industry will solve for that.”

Maine and Washington state have also recently banned food packaging made with PFAS. Washington, New Hampshire, and Colorado approved a ban on firefighting foam with PFAS, and a similar bill is on New York Governor Andrew Cuomo’s desk. Washington is also taking legislative action on PFAS in carpets. Several states set drinking water limits, started monitoring for PFAS, or took administrative steps to address the issue. Around 30 states considered new laws around PFAS in their most recent legislative session, according to Safer States, and the group expects more laws to pass next session.

Meanwhile, some states are not moving towards banning PFAS, and at the federal level, the Trump administration and its EPA has been hostile toward new regulations. It attempted to suppress an Agency for Toxic Substances and Disease Registry report that states that the EPA’s advisory level for PFAS in water should be 10 times lower. In July, it partially threatened to veto the defense bill because it contains provisions that would require the military to clean its PFAS-contaminated sites, and require the EPA to set legal limits. Though there are advisory limits on PFAS for water in place, the EPA has so far refused to establish binding guidelines.

In Michigan, a state toxicologist admitted at a May PFAS conference that the chemicals are in dairy cows, but said the state wouldn’t test milk because it could put farmers out of business. In Maine, PFAS were found in every batch of biosolid fertilizer the state tested, but the state still hasn’t banned its use. 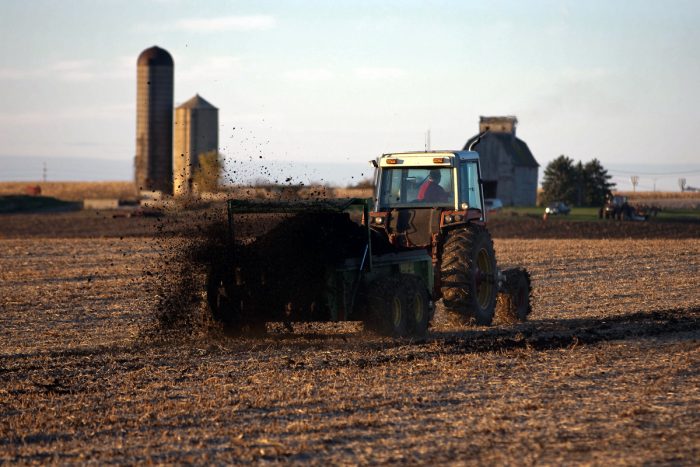 Either way, it appears that the landscape is changing rapidly. The loss of statewide markets and institutional customers can motivate industry. Home Depot and Lowe’s, for example, have pledged to stop selling carpet made with PFAS. Firefighters in Seattle recently put out a marina fire with PFAS-free firefighting foam, demonstrating that non-toxic alternatives exist and work.

“If I’m a company then I’m thinking, ‘Dude, the market for alternatives is going to be big and we should be a part of it,’” Doll said.

Removing PFAS from water is more challenging, as most filters are only partly effective. And even if the chemicals are removed, there’s no destroying them. Public health advocates say they would need be stored in secure facilities that are similar to the ones that store nuclear waste until a solution is found. Researchers are considering everything from high-temperature incineration to using PFAS-destroying bacteria found in New Jersey swamps.

“Once they’re in the environment, they don’t go away,” Schreder said. “Because of their extreme persistence, we’re going to have them forever—that’s why prevention is so important.”

Cost is another complicating factor, said Christy McGillvray, director of the Sierra Club of Michigan. Cleanup will require untold amounts of money, and she argues industry should be responsible for removing PFAS from the environment. Aside from a few lawsuit settlements that yielded what McGillvray called “peanuts,” no state has required industry to cover the costs, she said.

“Some individuals and companies have made obscene amounts of money off of poisoning the planet and they are the ones that should be responsible for cleaning this up,” added McGillvray.

“We need a regulatory system that forces companies to prove that what they’re putting into the market is safe instead of forcing us to prove that we’re sick before doing anything,” she said.

This article was updated to better describe how PFAS chemicals are contained in the lining of World Centric packaging.