The city has a rich, often-overlooked history of Black veganism, intertwined with goals of improving health, empowerment, and community-building. 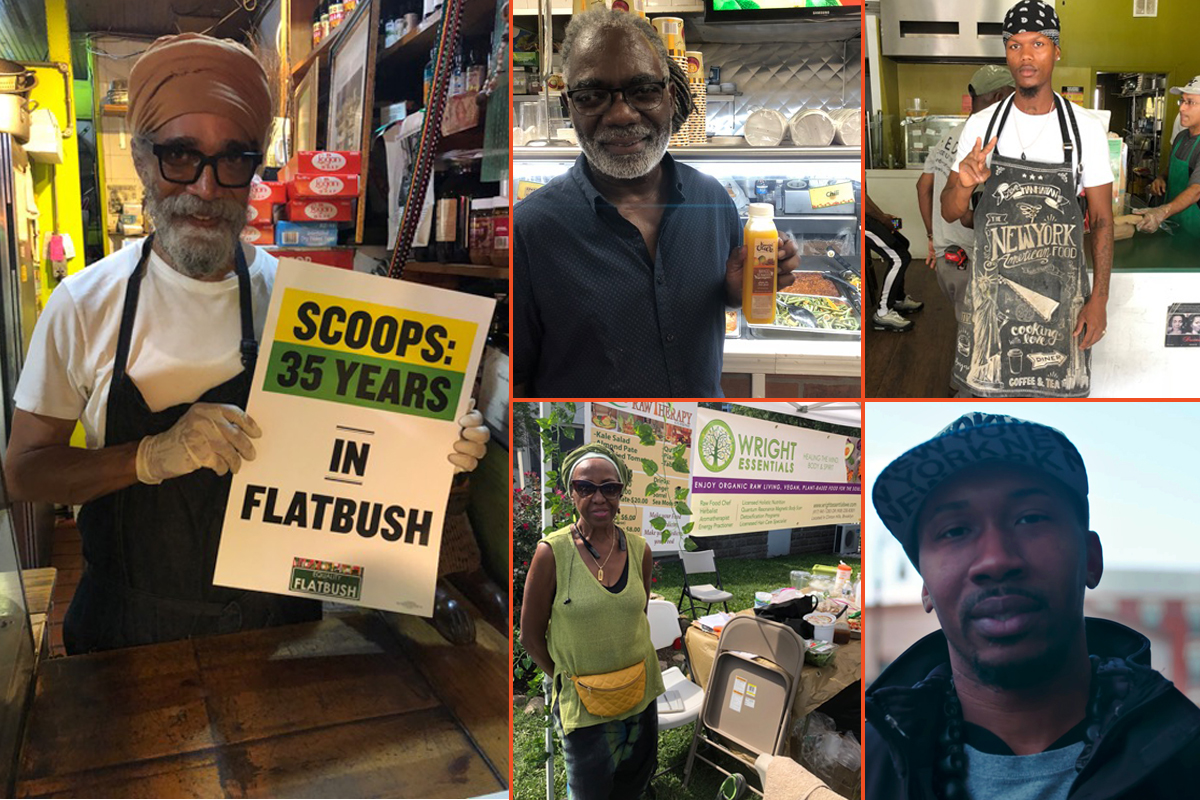 Black Veg Fest celebrates New York City’s rich, often-overlooked history of Black veganism, while also offering resources to newcomers. People at the welcome table handed out flyers for organizations including The Grand Jikoni, a vegan culinary incubator with a children’s after-school cooking camp and a teenagers’ junior chef training program, and pamphlets such as the “African American Vegan Starter Guide.”

The guide presents a timeline of African American vegan foodways from 1915; highlights include Dick Gregory’s activism around 1965, the opening of Harlem’s raw, vegan food company, Sunfired Foods, in 1978, and the 1983 opening of the first Soul Vegetarian restaurant, which now calls itself the world’s largest chain of vegan restaurants with 14 locations.

“Veganism is not new to communities of color. They just haven’t received the same visibility as white vegans,” said Eloisa Trinidad, a community organizer and representative for Plant Powered Metro NY and Chilis on Wheels, a plant-based soup kitchen. “Meat-heavy ‘soul food’ originated from slaves eating their overseers’ scraps. But consider the mostly plant-based diets before colonization, like Caribbean ital [a Rastafari plant-based diet, derived from the word “vital”], Indigenous American and West African cuisine, and Orthodox Christian Ethiopians who by religious custom eat vegan for 252 days a year.”

A Long History of Black Veganism

Far from a new trend, Black vegans (and vegetarians) are an established diaspora community rooted in religious and cultural traditions. The Nation of Islam has always prescribed a vegetarian diet, the African Hebrew Israelites have led a global vegan campaign from their village in Israel since 1969, and Black humanitarian activists like Coretta Scott King, Angela Davis, and Dr. Amie Breeze Harper all followed and endorsed a vegan diet.

These groups comprise a generations-old movement that has recently received more attention from mainstream white audiences. Chef and activist Bryant Terry’s 2009 Vegan Soul Kitchen, for instance, has in the last decade become one of the best-selling vegan cookbooks of all time. Black Vegetarian Societies have cropped up in several states and Baltimore—a city with its own notable Black vegan movement—is home to the AfroVegan Society, one of the country’s seminal vegan advocacy organizations.

“Veganism has always been my holistic way of life,” says Scoops’ owner Tony Fongyit. “In recent years, people have been growing more conscious, so they are going back to the basics of food as medicine.”

Neighborhood regulars stop in for a rotating variety of organic grains, legumes, and vegetables dishes made from scratch daily, such as black rice and split peas, tofu and nut meats with tamarind sauce, vegan lasagna, or a seamoss shake. Despite its longevity, Scoops now faces the threat of foreclosure as gentrification increases neighborhood rents. “I’m currently operating without knowing if I can afford to renew my lease,” said Fongyit, who has launched a fundraising campaign to save Scoops.

In addition to supporting animal welfare, environmental sustainability, and supporting spiritual development, these individuals’ core values are community and health. David Simmons, founder of Harlem’s 27-year-old Uptown Veg, says that when he first opened, “Dreads and vegetarianism felt like new trends. I wanted to open a restaurant that makes healthier food than what the neighborhood offered. We were the first uptown juice bar, and later we started selling food.” Simmons also gave a nod to Harlem’s first vegan restaurant, Strictly Roots, which closed in 2012.

Uptown Veg attracts a steady stream of locals with its juice bar, cafeteria-style counter that serves mac and cheese (made from yucca), sweet potatoes and yams, curry chickpeas, mock breaded chicken and other soul foods, and homemade desserts like sweet potato pie and bread pudding; the stereo plays John Coltrane as diners chat with Simmons. “I was shocked by the popularity when we first opened,” he said.

That popularity has not only sustained Uptown Veg, but has led to the rise of a number of new Black-owned vegan restaurants in New York, such as Sol Sips, Bunna Café, and Seasoned Vegan, which build upon their predecessors’ mission of making delicious and healthful food for their communities.

Jahlookova, a vegan restaurant 10 blocks north of Uptown Veg, opened in January 2019. Owner Royal Wellington serves smoothies, patties with fillings such as callaloo, lentils, and split pea (an alternative to Jamaican beef patties), and vegetable curry rotis. “I was raised Rastafarian, which encourages a plant-based diet, but I still ate lots of meat in my Caribbean culture,” Wellington said. “I first cut out beef and pork 15 years ago, then chicken and fish, and now I’ve been fully vegan for two years.”

Wellington also prides himself on steering clear of processed foods and soy-based meat alternatives. “Some vegan places make almost only soy meats, which takes advantage of the conscious community and makes ‘consciousness’ itself a trend. I wanted to help my community become truly health-conscious,” he said. The walls at Jahlookovs alternate posters featuring integral health and Black pride: “Liberation Diet Pyramids of Wellness” and “Kemetic Chart” are posted next to “100 Inventions Made by Black Men and Women” and “Remarkable Black Women Portraits.”

These entrepreneurs consider themselves chefs as much as community educators; several owners recount hitting a personal rock bottom that veganism helped them escape and which inspired them to share their new lifestyle with others. When Chef Chyna, creator of Bedford-Stuyvesant’s Bad Gyal Vegan, tried a New Year’s 30-day plant-based diet with intermittent fasting, she said she noticed “mental clarity, heightened senses, and a whole-body clean feeling that changed my life.”

She founded a meal-prep business five years ago while living in a homeless shelter with her two children. “I started from the absolute bottom and cooked meals with grass-fed beef, salmon, and other quality meats for high-fitness clientele,” she said. “But then I experienced the overall better health of a plant-based diet, even for people trying to bulk up, and I left my other business—even though it was becoming really lucrative—to start Bad Gyal in January 2019. I want to show my community, especially Caribbean folks, that you can get fully flavored and seasoned food that is reminiscent of your childhood back home.”

Shenarri Greens, a chef at Crown Heights’ Greedi Vegan, which opened in April 2018, also recalls a clean lifestyle switch. “I had been cooking for eight years and came to a point of lacking energy and drinking and partying too much. Three years ago, I became vegan and now I teach customers, through casual conversations over the countertop, how to live healthier. My ideal cooking style is moving toward mostly plants and less soy, but you have to meet people halfway with some fake meat, with something that tastes more familiar, as they transition to a new diet.”

With credence to the innovators who came before them, new chefs are exuberant about the future of this cuisine and its potential to enrich their communities’ health. Back at the Black Veg Fest, Eddie Rodriguez offered samples of vegan mac and cheese from his catering company, Veggie Frito, while sharing his back-story, starting with the high-school cooking class where he first learned to cook at age 14.

“I started to love cooking because it’s this tangible, accessible art form that directly helps people. After high school, I worked in 50 restaurants, all different cuisines, but I felt odd when I started cooking in high-end restaurants because my friends couldn’t afford to eat there,” he explained. After his parents died within two months of each other, he went vegan and investigated how his culinary passion could most benefit his community. “I’m here to introduce the public—white, Black, brown, everyone—to all types of vegetables, flavors, textures, shapes, and colors,” he said.

Judging by the crowd at the Black Veg Fest—and the array of vegan-focused offerings around New York City—the public is ready as well.