Hopi leaders are restoring food sovereignty for the tribe’s 2,500-square-mile reservation—which has only two grocery stores. 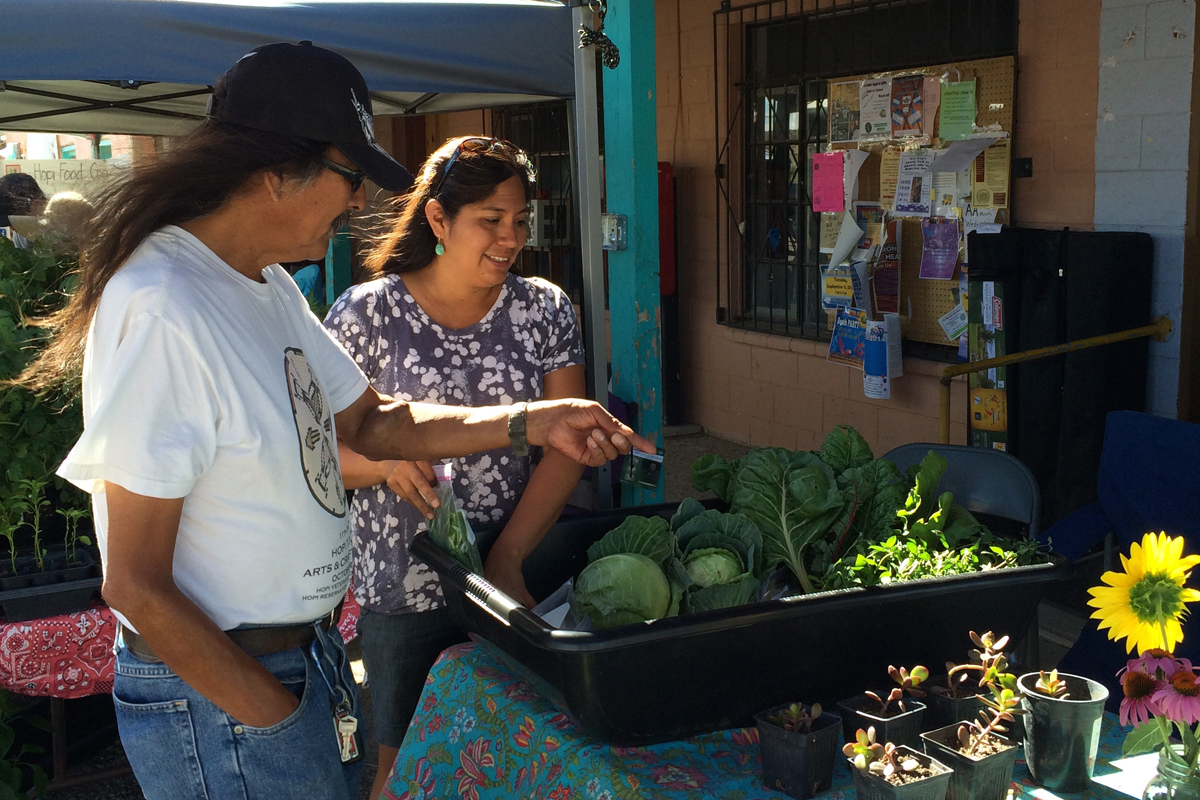 For Rosalie Talahongva, a former business analyst and a member of the Hopi tribe, weekends on the reservation are sometimes like battles. Unlike urbanites, who might get to enjoy a relaxed morning, her Saturdays start at dawn. She often leaves her home at 6 a.m. and drives more than 100 miles southwest from Second Mesa in the northeast corner of Arizona to a nearby town to do a week’s worth of laundry, buy gas for her car, and shop for groceries.

“You need to get everything set up,” said Talahongva. “Because if you forget something, you might have to wait another week.”

This routine has become normal for most of the Hopi people living on the reservation. According to a food access map from the Arizona Department of Health Services, there are only two grocery stores on the roughly 2,500-square-mile reservation, where more than 9,000 Hopi live. The Navajo reservation, which completely surrounds Hopi lands, has only a few stores in a 100-mile radius, and the high prices drive many residents to travel long distances for their groceries.

“If you forget to get milk this time, you won’t buy it at the nearby store because it’s usually $4 a gallon,” said Talahongva. On top of high price for dairy products, fresh fruit and vegetables can barely be found in reservation stores. “Only when you need things like water, you will go and buy them there.” Because of arsenic contamination, much of the water on the Hopi reservation is undrinkable, and a new report has found that Native Americans are most likely to live in homes without tap water or flushing toilets. 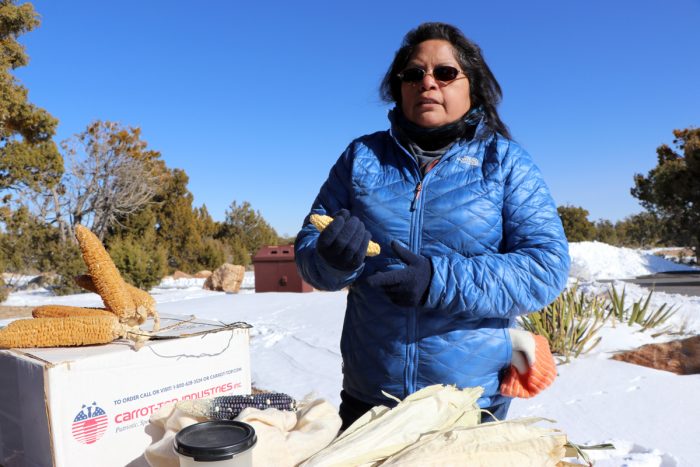 A food and farming assessment conducted by the Natwani Coalition in 2004 and 2005 found that the Hopi spent nearly $7 million per year to transport food into their communities. Each shopper spent 100 hours a year driving to stores and back—and an extra $2,000 per year on food—compared to those who lived off the reservation.

Many Indigenous people and researchers refer to the ways their food culture was altered as “food colonization” or “culinary colonialism.” Ingredients central to western diets, such as milk, wheat, and refined sugar, are thought to pose a larger health threat to Native Americans than to the general population, and have led to widespread health issues such as high rates of gallstones, obesity, and diabetes. In fact, Patty Talahongva, Rosalie’s sister, suffered from gallstones when she was 26 and said it was common for Hopi to develop the problem that young.

To reclaim their culture and their health, the Hopi, like many Native people across North America, are now working to decolonize their diets and food sovereignty is vital to that process. In particular, the Natwani Coalition, an organization that promotes traditional agriculture among Hopi people, has developed a number of programs with the overarching goal of restoring the local food system.

The Natwani Coalition’s Efforts for Change

“If you don’t know Hopi, you wouldn’t know that we’re a food culture,” said Samantha Honani, the former program manager at the Natwani Coalition. “Our existence is based around our corn, and if we don’t have our corn in our homes, within our villages, within our ceremonies, we cease to exist as people. We are all intertwined with each other and make up the Hopi life way—it goes as far back as our creation story.” 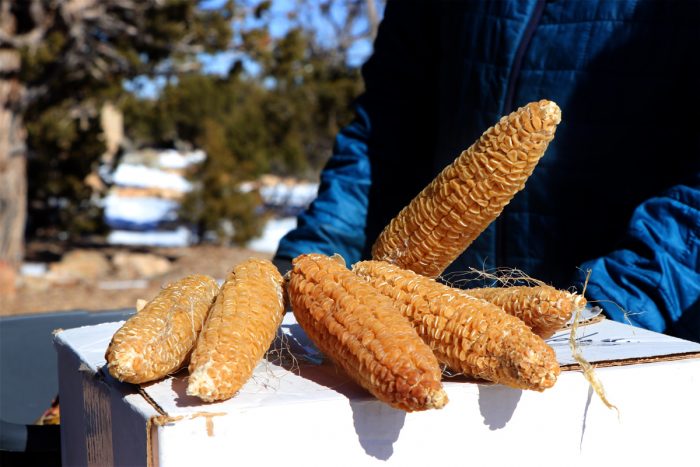 Founded in January 2004, the Natwani Coalition works to help people grow, distribute, and eat foods that are “healthy for Hopi individuals and their communities.” The coalition now runs five different projects, including the biannual Hopi agricultural and food symposium, which encourages conversations and discussions among farmers about traditional farming practices on the reservation.

The Coalition also hosts a talk show on Hopi Radio, holds an annual Heirloom Seed Run as a community bonding event, and organizes the annual Hopi farmers’ market with the University of Arizona, the Village of Tewa, and other local organizations. Unlike most city markets, vendors and shoppers at the farmers’ market barter their seeds and crops just like the tribe did for thousands of years.

The Natwani Coalition also runs two community grants programs—one for individual local food producers, and another for villages as a whole. The individual grantees this year include a number of efforts to build and expand family farm fields, develop rainwater catchment systems, and improve fencing for ranching operations. 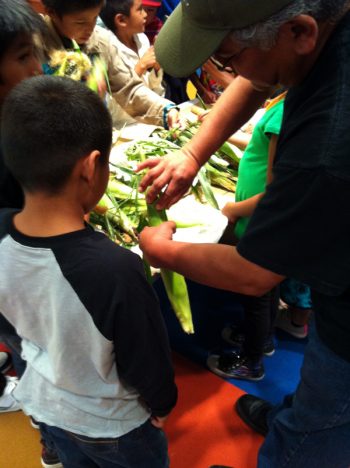 It’s the first year the Coalition has provided funds for both individuals and communities that promote Hopi traditional agriculture.

The program recently began including ranchers because, “they deal with soil erosion, wind erosion, [and] water erosion,” said Terri Honani, the current program manager at the Natwani Coalition and Samantha’s sister. The Coalition also offers technical training and assistance for grantees.

The Coalition is also dedicated to getting the next generation involved. The Hopi Natwani for Youth Project creates a curriculum to ignite conversations in families and get youth interested in traditional farming. The lessons are focused on philosophical value-based blessings that are at the center of Hopi culture. Through three trainings, 24 new facilitators received training and joined the project this year.

“Traditional and historical agricultural practices have the ability to teach us a lot. They [will] play an imperative role into the future,” said Staci Emm, a professor and extension educator for the University of Nevada in Reno and a member of Yerington Paiute Tribe. Emm led a research project in 2014 funded by the U.S. Department of Agriculture (USDA) focused on implementing sustaining agriculture programs on the Hopi reservation. “Traditional knowledge needs to be instilled in future generations to empower them to deal with food access,” adds Emm.

The Coalition is eager to do more. Since the original assessment is 15 years old, Honani and her colleagues are planning to launch a new one to see what has changed and to shape their future project planning. They travel to each village and attend community meetings to encourage farmers and residents to participate in the Coalition’s projects and programs.

For many Native Americans, the choice of what food to eat is a choice between a modern or traditional lifestyle—and many Hopi are working to strike a balance between the two.

“All of us are living in dual worlds out here,” said Honani, who is a working mother of two. She admits sometimes that eating healthy can feel like a burden. “Going next door to the store and getting a warm-up sandwich or something from the deli is more convenient and less time-consuming than going to the produce section,” she adds.

The choices between growing food and shopping at grocery stores is similarly difficult. People say they want more shops on the reservation, but many wonder how it will that affect traditional ways of living. If agriculture fades away, some worry that Hopi culture may not survive.

“Before we used to live on land and now we are scattered all over. We kind of get spoiled,” said Rosalie Talahongva, admitting that when you live in a city, you get used to the convenience of shops and other modern conveniences. “I think that [more access to] fresh vegetables would be great; but again, what does that do to our people?” 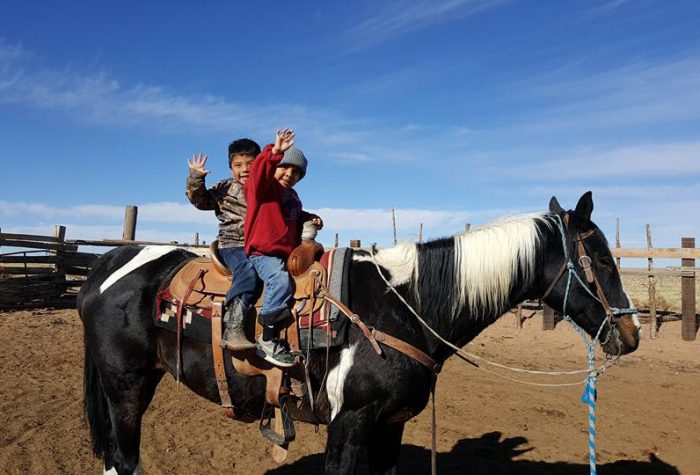 Like Rosalie, Terri Honani decided to return to the reservation after living away for years, and she has found her own balance. She has a nine-to-five job, but still raises cattle at home. Her family owns a farm that provides them with fresh meat and vegetables, and growing and consuming her own food, as Honani sees it, has connected her to her culture.

Honani sends her children off the reservation for better education, like many Hopi, but she always reminds them of their identity. Her two sons spend the weekends with family on their ancestral land learning the Hopi ways; it’s yet another way she balances traditional and Western life.

“I learned the Western part of health and wellness and came back to provide it to my people,” said Honani. “Because Hopi don’t do things for themselves, they do it for the universe.”

Top photo: At the farmers’ market on the Hopi reservation. All photos by Lily Qi.

Linghua (Lily) Qi is a Chicago-based freelance journalist and a recent graduate from Medill School of Journalism at Northwestern University. Her reporting focuses on community and social justice issues. She is a current intern at Kartemquin Films and a fellow at Free Spirit Media in Chicago. Read more >