The reversal is the Trump administration’s third about-face on a toxic pesticide. 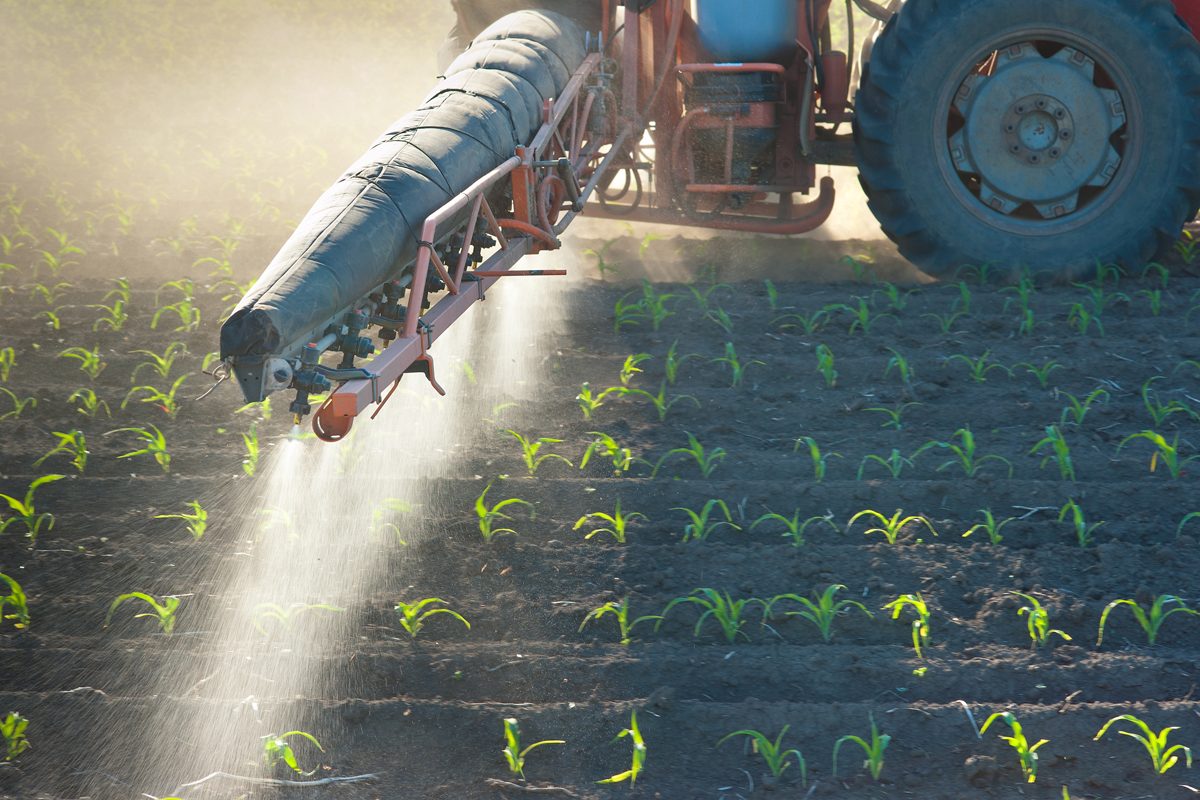 The Trump administration plans to weaken environmental safeguards for atrazine, the second most widely used herbicide in the U.S., even though it’s known to castrate frogs and is linked to birth defects and cancer in humans and animals.

The U.S. Environmental Protection Agency (EPA) announced last week that it would allow 50 percent more atrazine in the surface water along the nation’s waterways, despite the agency’s own assessment, which in 2016 found that the weed killer poses a chronic risk to fish, amphibians, and aquatic invertebrates and suggested that its allowable amount should be significantly decreased.

Atrazine is banned in Europe, due to its potential to contaminate water sources, but widely used in the U.S., where about 70 million pounds of the pesticide is sprayed—mostly on corn, but also on sorghum, sugarcane, and a few other crops, as well as on golf courses, Christmas tree farms, and in residential landscaping. Runoff washes the chemical into streams, rivers, and groundwater; it’s one of the most common pollutants found in American waters.

Independent research has shown atrazine’s impact on aquatic life is significant: it can lead to reduced survival, growth, immunity, and sensory capacities, increased disease, as well as reproductive and developmental abnormalities, and behavioral changes. There’s also evidence the herbicide harms plants and wildlife. In humans, it’s associated with thyroid, ovarian, and other cancers, low birth outcomes, pre-term delivery, and birth defects. In 2016, California added atrazine and related chemicals to the Proposition 65 list, listing them as substances known to cause reproductive and developmental toxicity.

Of major concern is atrazine’s impact on endangered species. The EPA has already found that the chemical’s use will likely adversely affect California Red-legged frog and Delta Smelt, Pallid Sturgeon, two freshwater mussels, the Topeka Shiner, and several other species.

“Atrazine is a hundred times worse than glyphosate, the active ingredient in Roundup, because it’s an endocrine disruptor,” said Nathan Donley, a scientist at the Center for Biological Diversity, which has called for a complete ban of the chemical. “It can have huge impacts and should have been banned a long time ago.”

Atrazine has been mired in controversy since Dr. Tyrone Hayes, an industry funded scientist-turned-whistleblower, published a study showing the chemical alters the sex lives of adult male frogs, emasculating most and turning some into females. The feud between Hayes and Syngenta, the biggest manufacturer of atrazine in the U.S., revealed the industry’s zeal to discredit independent scientists, push its own studies, and hold sway in the government’s regulatory process.

The reversal on atrazine is the Trump Administration’s third about-face on a toxic pesticide.

In July, the EPA announced it would not ban the pesticide chlorpyrifos as previously scheduled, despite numerous studies showing it causes brain damage and impairs children’s IQ scores. The EPA’s own assessment concluded that the levels of chlorpyrifos currently found on food and in drinking water are unsafe and Hawaii and California have already banned the pesticide outright. (In California, it was already banned for household use but is widespread in agriculture.)

That same month, the EPA said it would end long-running safeguards meant to protect children from exposure to pyrethroids, a class of insecticides used in bug sprays, pet shampoos, and on fruits and vegetables. The move will triple the amount of exposure to pyrethroids that’s considered safe for children. The EPA decided to get rid of the child safety standard despite evidence from peer-reviewed studies that pyrethroids can cause learning deficiencies and neurodegenerative effects associated with Alzheimer’s and Parkinson’s diseases, among other impacts.

Atrazine is one of the most studied and monitored pesticides, due to a 2003 agreement between the EPA and Syngenta and other small atrazine manufacturers. If a watershed shows atrazine concentrations above the allowed threshold in any two years of monitoring, Syngenta must do mitigation activities to reduce atrazine exposure, such as education and outreach programs for growers and distributors.

EPA’s plan to lower safeguards for atrazine is part of the chemical’s current registration review, conducted to reapprove its use. In the 2016 EPA review—a preliminary ecological risk assessment of atrazine based on the analysis of newly available science and monitoring data—the agency found extensive environmental harm. But in the memorandum posted last week, the EPA said some studies used in that review are fundamentally flawed and the review ignores recommendations made by previous scientific panels.

As a result, the agency says it plans to change the current Concentration Equivalent Level of Concern (CELOC), a threshold meant to protect aquatic life, from a 60-day average concentration of 10 parts per billion of atrazine to 15 parts per billion. The newly proposed benchmark is almost five times higher than the 3.4 parts per billion that the EPA identified as safe in the 2016 review.

And while the threshold is based on the potential for recovery of aquatic communities, scientists say the health of plant communities is generally indicative of that of the entire ecosystem due to cascading effects down the chain.

The EPA also said they changed the CELOC in response to significant public comments about the level of regulation, and the inherent uncertainty related to the data.

“It’s ironic [the EPA] would move to increase the allowable levels after previously coming to the correct conclusion that atrazine is an environmental and biological hazard,” Hayes told Civil Eats. “Given that research shows that fish and amphibian reproduction and behavior can be damaged by atrazine at levels as low as 0.1 parts per billion (ppb), raising the acceptable levels to 15 ppb is disastrous.” He added that the policy change will certainly harm the already-declining fishing industry.

Syngenta, the agrichemical giant that makes most of the atrazine available on the market, says the chemical is safe at levels found in the environment. “Atrazine’s safety has been established in nearly 7,000 scientific studies over the past 50 years,” Ann Bryan, the company’s senior manager for external communications, said in a written statement provided to Civil Eats.

Hundreds of independent lab and field studies have found evidence that opposes Syngenta’s claims. But it was Hayes, a University of California, Berkeley scientist whom Syngenta paid in 1998 to run experiments on atrazine, who fired the first salvo. When he discovered the herbicide altered the sex lives of frogs, the company tried to block the results, Hayes said. And because he refused to toe the company line, the scientist severed ties with Syngenta in 2000. He then repeated the experiments and published a study that showed frogs changed sex by exposure to atrazine at levels 30 times below what the EPA permits in water.

Hayes has since openly fought Syngenta, published other papers, and reported that he had found frogs with sexual abnormalities in atrazine-contaminated sites in Illinois, Iowa, Nebraska, and Wyoming. According to a review by Hayes, the best predictor of whether a study has found atrazine to have significant biological effects was the funding source; when research was funded by the pesticide’s manufacturer, studies have found either no effect or only small effects.

Despite his findings, the EPA approved the continued use of atrazine in 2004. That same year, the European Commission banned the chemical and a class-action lawsuit was filed by several Midwestern cities and towns accusing Syngenta of contaminating their drinking water. The documents unsealed in those lawsuits showed that Syngenta worked to discredit Hayes, with company reps following him to lectures, and attacking him both personally and professionally.

Several other papers also have pointed out flaws in the EPA’s approach to regulating the chemical and the bias embedded in atrazine studies and other publications funded by Syngenta. The researchers in the two studies linked above say the EPA is mired in conflicts of interest and has used only a small portion of the available data to determine a chemical’s impacts, often relying exclusively on industry-supplied studies. In its recent 2012 reassessment of atrazine impacts on amphibians, for example, the EPA relied on a single industry-funded study, while excluding 74 other published studies because they did not meet rigid criteria for study inclusion.

A number of independent studies have detected no or minimal effects of atrazine on amphibians or fish—though reviews suggest some of those studies might be flawed.

Jason Rohr, a professor at the University of Notre Dame and an expert on atrazine’s effects on amphibians, said it’s hard to know how the new allowable levels of atrazine will impact aquatic life. But, he added, it certainly won’t improve the quality of America’s waterways.

“This EPA decision will very likely result in freshwater ecosystems being exposed to both higher concentrations of atrazine and for longer periods of time,” he told Civil Eats. “This is potentially consequential because this chemical is clearly associated with a myriad of adverse effects on freshwater organisms.”

The EPA decision will also impact humans. Drinking water wasn’t mentioned in EPA’s announcement last week since it’s related to an ecological risk assessment, not to a human health risk assessment. But the two issues are related: the decision to allow a higher level of atrazine in surface waterways will impact humans because many of those waterways serve as drinking water sources, said Olga Naidenko, vice president for science investigations with the Environmental Working Group (EWG). This means, she said, that “water utilities would need to expend more resources to lower atrazine levels to the legal standard for drinking water.”

Already, atrazine taints the tap water of nearly 30 million Americans in 28 states, according to an analysis published by EWG last year. EPA monitoring data show that seasonal spikes of atrazine in drinking water (which happen when the chemicals are being applied in the fields) are often three to seven times higher than the federal legal limit. But these numbers are not reported to people in the affected communities because the Safe Drinking Water Act allows utilities to report only annual averages.

The EPA decision will likely increase atrazine levels in drinking water, both in wells and municipal sources, said Rohr, because many of the water treatment plants in the Midwest—where atrazine is used heavily—can’t afford to use the expensive activated carbon needed to remove it from drinking water. In 2012, Syngenta agreed to pay $105 million to settle a class-action lawsuit over atrazine-contaminated water supplies after more than 1,000 community water systems filed reimbursement claims for having to filter the chemical from their drinking water.

Donley, from the Center for Biological Diversity, pointed out that EPA’s reversal on atrazine may be linked to the fact that former Syngenta lobbyist Jeff Sands was appointed as a top agricultural advisor to then-EPA administrator Scott Pruitt in 2017. At the time, the White House signed off on an ethics waiver that allowed Sands to work at the agency despite his previous role. (Sands left the EPA in 2018 and there’s no proof that he influenced the atrazine decision.)

Other weakening of pesticide rules may also be in the works, Donley said, as several controversial chemicals are undergoing their periodic registration review, including paraquat, neonicotinoids, and several fumigants. And once the agency publishes final rules, they can only be challenged in court—not an easy thing to do. For this reason, what happens now will likely have an impact on the environment for years to come. As Donley put it: “This administration has a lot of power in dictat[ing] the next 15-20 years for these pesticides.”

(This article was updated to reflect Jason Rohr’s new role at the University of Notre Dame.)