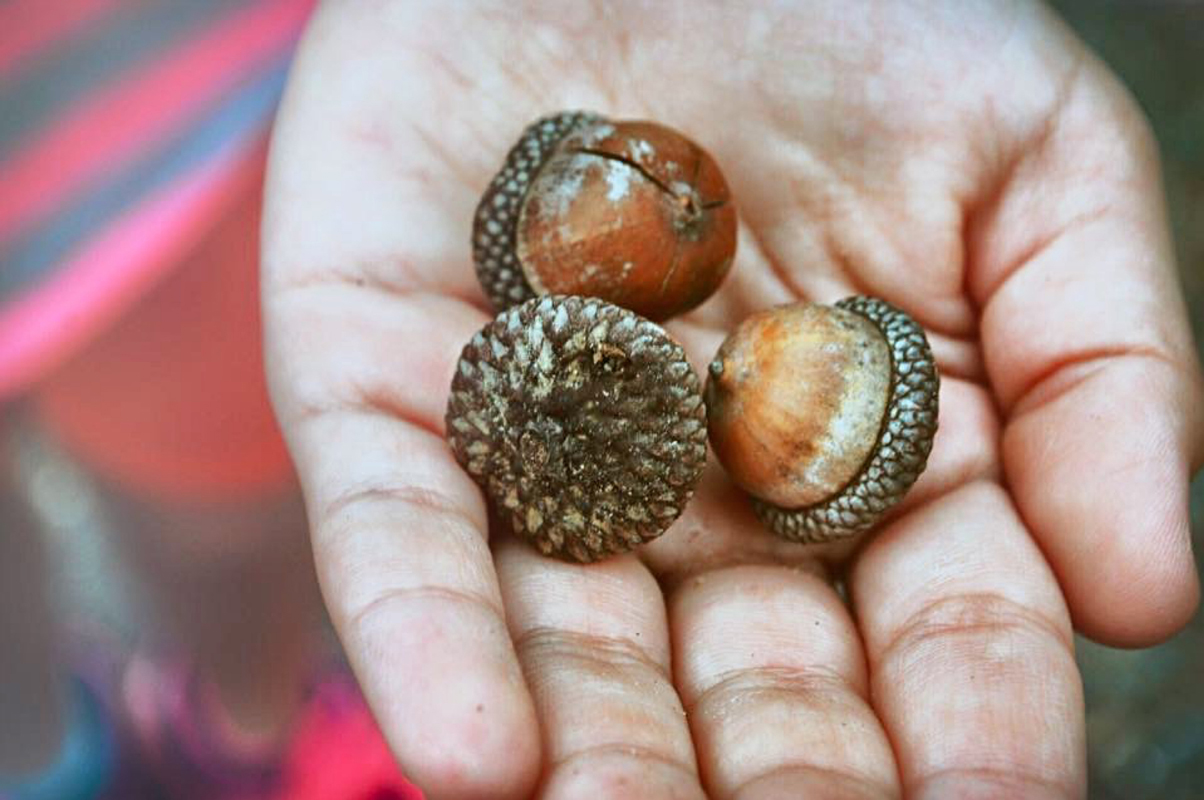 In late fall, the parched hills of Northern California are wilting hot, but relief can be found in the dark patches of shade cast by towering native oaks. Some are hundreds of years old, with spreading limbs as thick as human torsos.

In Lake and Sonoma Counties, this is the season Indigenous people once harvested vast stores of ripe acorns, a staple food in native diets for thousands of years. A small group of Pomo and Miwok youth from nearby tribal communities are gathering beneath oak groves here to once again harvest the acorns produced in abundance by the ancient wild trees.

These acorns are destined for Acorn Energy Bites, a modern, tasty two-bite health snack the young people began selling this summer. Nearly four years in development, Acorn Bites have been selling out at local farmers’ markets since June. 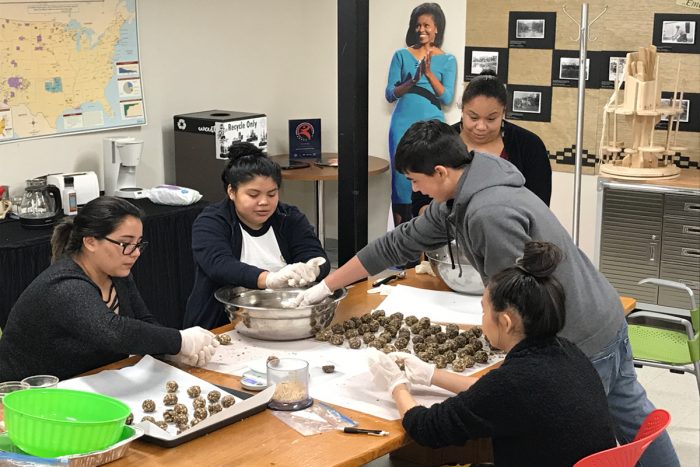 The snack bar is a native food project of the Tribal Youth Ambassadors of the nonprofit California Indian Museum and Cultural Center (CIMCC) in Santa Rosa, California. The Ambassadors, with about 20 current members, are students ranging from grade school to college.

The Tribal Youth Ambassador program has existed since 2010 as a resource for local Pomo and Miwok youth. “Tribal youth often find themselves challenged about who they are culturally,” says Nicole Lim, the executive director of the CIMCC; she added that the program aims to develop pride, and help them learn how to deal with racism and stereotypes in school. She said her teenage daughter’s been called Pocahontas and asked if she lives in a teepee. Early California history is still largely taught from the colonial perspective.

Ambassador projects provide young people with opportunities to learn ancestral traditions, cultural heritage, and pride. Projects and activities frequently focus on ways of transferring traditional knowledge from elders, like foodways. The 12- to 18-year-olds also learn skills, training in history and public speaking, that they can use to represent Native communities, to create bridges between the tribal community and non-natives. 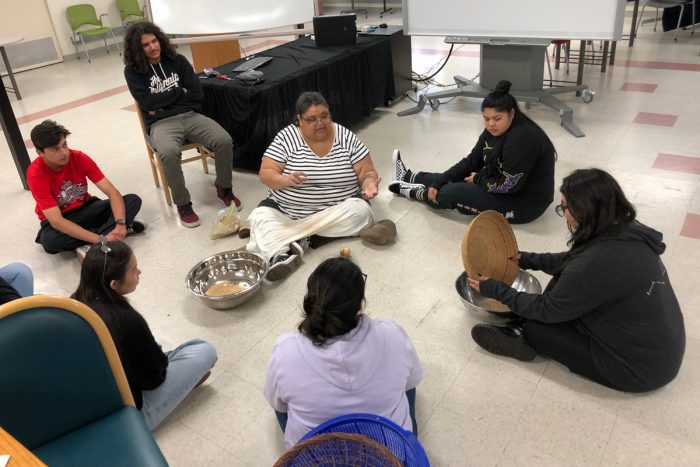 One of the young Ambassadors came up with idea of using traditional acorn in a modern protein bar. It was a project that would tie in efforts to transfer tribal knowledge, restore traditional foods, and integrate tribal traditions in everyday life.

Such efforts are part of a rising trend among tribal communities across the country. Projects to reclaim Indigenous foodways and promote food sovereignty are underway nationwide, to both improve tribal health and recover sustainable traditions. Indigenous chefs are creating renewed interest in traditional diets and foods through cookbooks and restaurants, while tribal groups are re-introducing healthy native foods and agricultural practices.

And because Acorn Bites rely on traditional tribal foods that U.S. government policies often put out of reach or off limits to Indigenous communities, “It’s also an act of resistance,” says Octavio, one of the Youth Ambassadors. [Editor’s note: Because of their experiences of being targeted online and in person, CIMCC asked that we not publish the Youth Ambassadors’ full names in this article.]

A Traditional Food Targeted by Colonizers

Acorns, it turns out, are also low on the glycemic index. Acorns’ sugars are absorbed slowly, a beneficial dietary aid to help ward off diabetes, according to one study. As a snack, they not only provide healthy carbs, they’re also high in protein, potassium, magnesium, calcium, and vitamin B6, a blend that is mimicked by commercially prepared energy bars.

Acorns are also a keystone of tribal culture and traditions. Throughout California, Indigenous people evolved highly specialized traditions for grove stewardship, acorn harvest and storage, and the labor-intensive, multi-step processing required to make them tasty. The seasonal cycle of activities surrounding acorns involved the community and undergird cultural bonds. 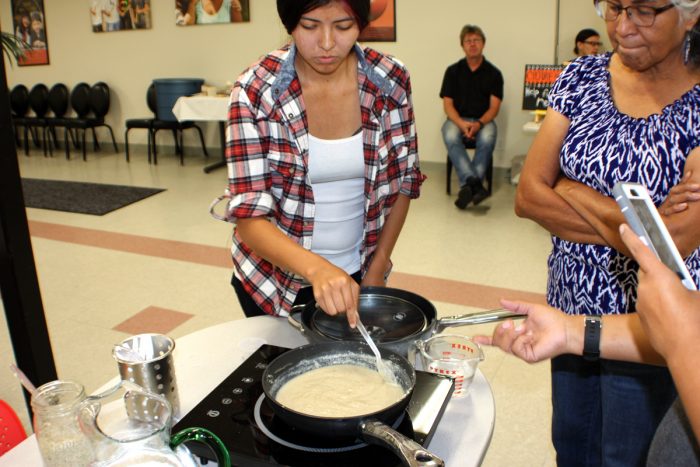 Those foodways, however, were swept aside first during the Spanish colonization, then by Gold Rush settlers, and ultimately by the state-sponsored removal of remaining Indigenous people from their highly productive lands and waterways. Within two decades of the Gold Rush, as tribal communities in California were killed, displaced, or legislated off their land, they were effectively barred from access to food sources and traditions across the California landscape.

“Our culture was targeted,” Lim says. “At the time, the idea was ‘kill the food, kill the culture.’ So, to survive, the traditional practices had to be hidden.”

After colonization, Indigenous diets changed, and so did the health of the community. Now, among all racial groups, California Indigenous adults have the highest rate of obesity, 38.7 percent, and the second highest age‐adjusted mortality rate for diabetes, 33.9 per 100,000 in 2010.

The process of creating Acorn Bites began by asking tribal community members to share traditions and oral histories of harvesting oak acorns, the ways of preparing them, and their place in the daily diet. 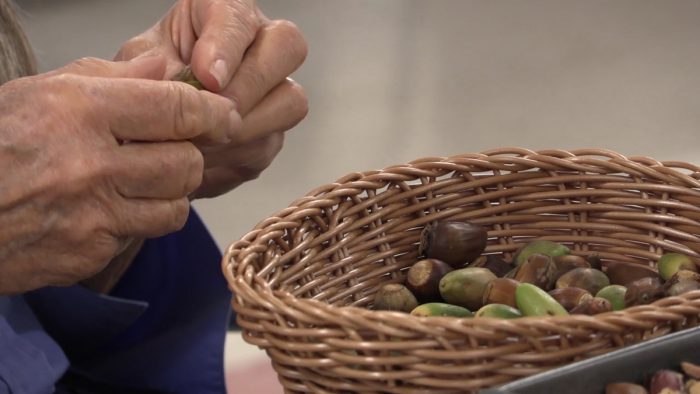 Processing acorns is labor intensive and multi-step. After gathering and sorting, they must be shelled, ground, and the meal leached repeatedly with water to remove bitter tannins.

Procuring the key ingredient of the bars is a time-consuming process that requires specific skills, and Lim says each family has their own traditions. It involves identifying the best trees, figuring out the timing of their acorns ripening, knocking the nuts free, and sorting the wormy ones from the fresh. And that’s just the start.

“Acorns have a bad rep because they can taste bitter,” Octavio explains. That bitterness comes from high levels of tannins, compounds that preserve the acorn but also make them unpalatable to humans. The tannins can be removed, but only by repeatedly leaching with water. 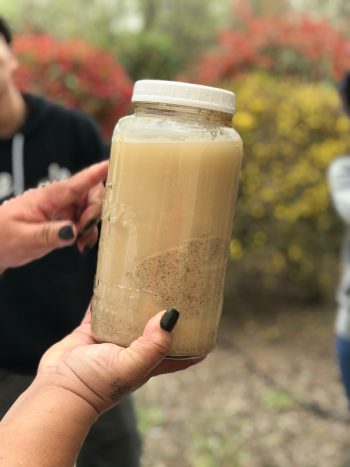 The Tribal Youth acorn workshops provide an opportunity to transfer foodways knowledge to a new generation.

To figure out the best way to prepare the harvested acorns, the group interviewed six community culture-bearers, who shared traditional knowledge about ways of selecting and sorting the acorns, drying and shelling them, storing them, grinding them, and leaching the raw meal.

To create a universally pleasing product, the Ambassadors recruited help from Native American chef Crystal Wahpepah. A Kickapoo tribe member, Wahpepah has crafted Indigenous food menus for her own catering and café businesses in Oakland. “We spent several years researching ingredients, testing recipes, while trying to preserve the integrity of pre-colonial foods,” she says.

The youth mixed acorn flour with various blends of berries, nuts, and other native ingredients and did taste tests with the community, Lim says. “Many were surprised by the nutty, sweet flavor,” she says. “Acorns usually have a mild, bitter taste. They don’t combine well with just anything. Acorn is a fickle ingredient,” she adds, smiling.

When the youth tested the bites first with the elders, Wahpepah says, “they tasted awesome, especially the dried cherry and pine nut flavors.”

Octavio, Kristall, sisters Colleen and Pauline, Maleah, and seven other young Tribal Ambassadors mix and shape the Acorn Bites in a commercial kitchen at the CIMCC. Around long tables in the CIMCC kitchen, the students separate the shelled nutmeats, tossing any that aren’t fresh and plump. After grinding, they run water through the meal multiple times to leach out the bitter, indigestible tannins. Then, they mix acorn meal in silver bowls with other ingredients, and form them into two-bite sized balls.

The project faces some difficult challenges, Lim notes. How does a community restore Indigenous food traditions when the food sources are fenced off on private property, or gathering is prohibited by law?

Community members harvesting acorns, she says, have been confronted by rangers. Permits are required on public lands, but obtaining them is complicated, since each government agency has its own process. Gathering is also restricted to a particular place, date, and time.

There have even been public objections from people concerned that native harvesting of acorns threatens wildlife. Lim recalls being asked at a recent local meeting, “Instead of plundering, why can’t you just go to the store?” The larger community does not always understand or respect, Lim notes, that native people and wildlife have coexisted here for many thousands of years. 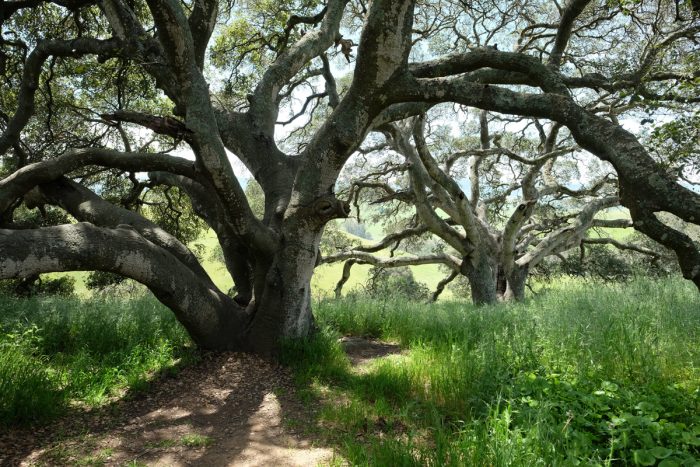 Acorns, still abundant, are a nutritional tribal food. But accessing California’s oak groves, like these on a hillside in a Sonoma county park, is an ongoing challenge.

That’s why one of the goals of the Ambassadors, Lim says, “is to build bridges and respect for efforts to revitalize our culture.” In coming months, CIMCC and the youth group will explore cultural sensitivity training and plans for community engagement in three surrounding counties.

CIMCC is also currently seeking ways to restore access to oak groves through creative stewardships with property owners. “Our ancestral lands and waterways hold our diets,” Lim says. They’ve already had some success; after a recent local newspaper article, CIMCC received calls from county residents with offers of access to acres of old, wild oaks.

The Acorn Bites themselves have turned out to be particularly popular. Some people have driven up from the Bay Area just to buy them, Maleah says. But even as the public has embraced their idea of modernizing the traditional acorn, Lim says it has raised some issues with appropriation. The Ambassadors are often asked for their recipe and process by non-natives, who want to make Acorn Bites themselves.

Proceeds from sales of the Acorn Bites are funding Youth Tribal Ambassador projects, including the next phase of efforts to help assess food security issues in the tribal community, and improve and promote access to Indigenous foods. The CIMCC is also communicating with neighboring Yurok and Karuk tribal communities about regional conservancy efforts and increasing access to wild foods such as salmon.

CIMCC and the Ambassadors are investigating ways to expand access to acorns and other traditional foods as well, by partnering with Bay Area universities to conduct acorn grove mapping, networking with Indian tribes in California and other states, and improving policy and permitting with local government agencies.

Over the long term, they hope to advance Indigenous people’s reciprocal relationship with—and consumption of—acorns, while advancing local tribal caretaking, gathering, and processing of the nuts and tribal stewardship of acorn food-system landscapes.

“Food is the hub of the community, of everything,” Lim says. “Sovereignty and food security go hand in hand. You can’t have one without the other.”