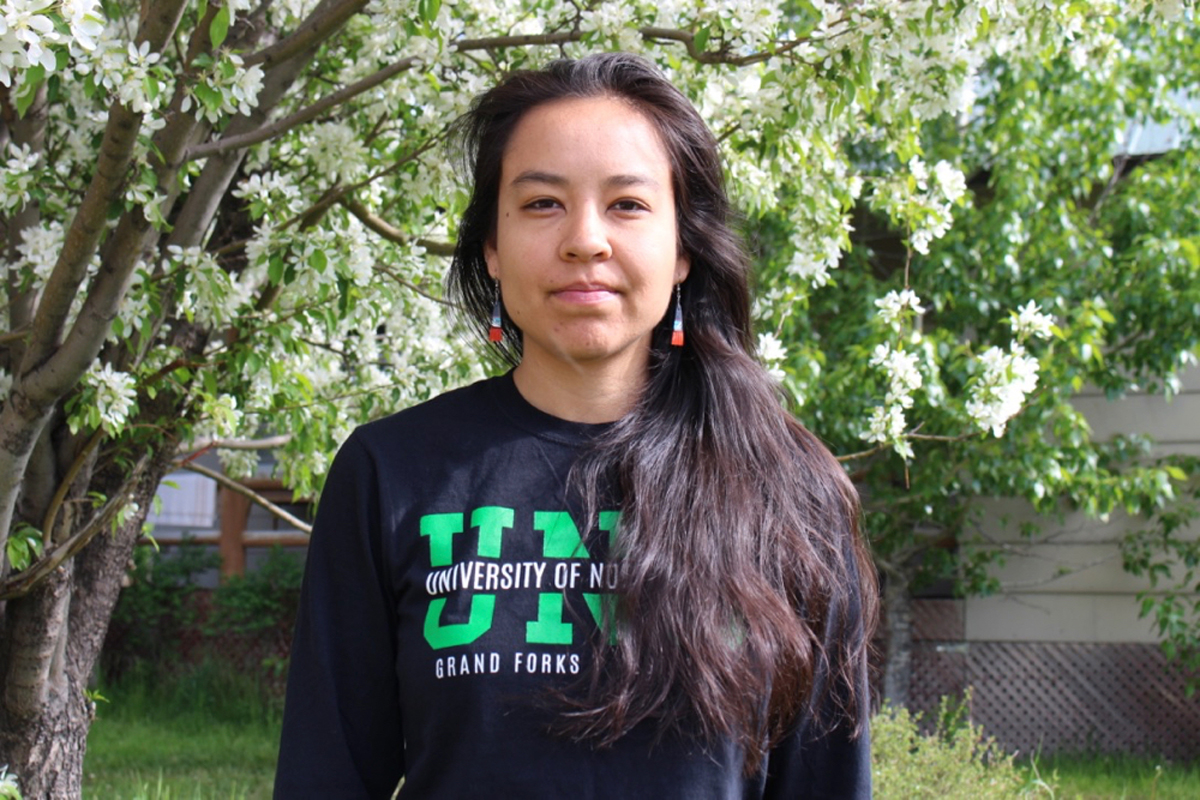 Lyla June is a musician, public speaker, and internationally recognized performance poet of Diné (Navajo), Tsétsêhéstâhese (Cheyenne), and Northern European lineages. A young elder with a rare wisdom, June sprang into the consciousness of many during the Standing Rock movement, when her powerful live feeds drew millions of viewers from around the world.

Though her art and activism continue to carry forward the messages of Standing Rock, she is now zeroing in on food and agricultural policy with the goal of building food sovereignty and eventually establishing a school to revitalize ancient approaches to farming.

A self-described “Indigenous Eco-Tubman,” June is pursuing a doctorate through the University of Alaska in traditional food systems and languages—“as a hobby.” While she is a graduate of Stanford University and the University of New Mexico, traditional native education and lifeways are at the heart of her current pursuit.

Civil Eats caught up with her at the Sovereign Sisters Gathering in the heart of the sacred Black Hills to learn more.

Tell us about your journey with food sovereignty—how and where were you raised and how did that influence who you are today?

I am Diné, Cheyenne, Scottish, and Scandinavian—and maybe other things that I don’t know—but my mom is Diné, and we get our clan from our mother’s side. Diné people perfected a mode of existence in the desert where all of their gastronomic needs were fulfilled in a way that regenerated the land around them—everything from managing piñon forests and three sisters crops to maintaining and protecting deer habitat. So, I think that’s where my food journey really started, hundreds of thousands of years ago on this continent.

Growing up, I was not very connected to my food, even though my ancestors were. I had mostly a colonized American diet. I ate from grocery stores, restaurants, a little bit of fast food… I ate your normal Bureau of Indian Affairs school lunch menu—and it was just trash. The only thing we could drink was milk at school [even though] we were all lactose intolerant, genetically.

He said that when the Europeans came, they were actually the primitive ones. We had vast societies, and we managed the land extensively. And the Europeans didn’t like seeing how sophisticated we were in the face of their society. They felt scared because their whole mission was to conquer an inferior race. 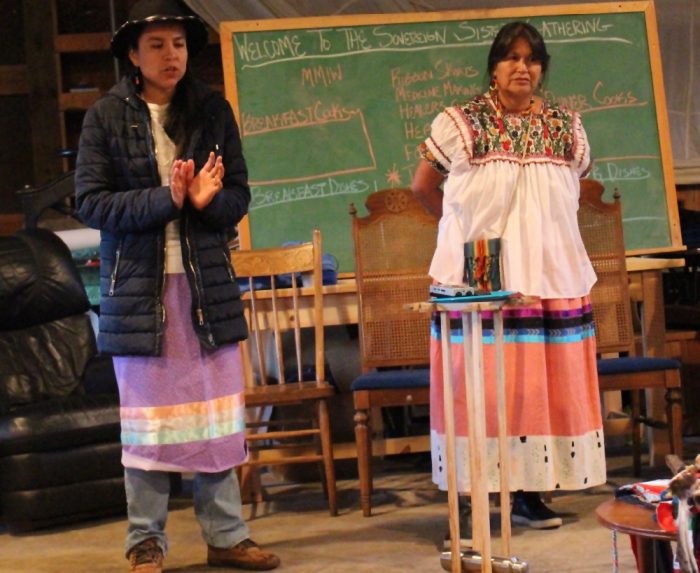 That’s what sparked my journey into traditional foods revitalization as well as language revitalization—because to truly change our relationship to food, we have to change the paradigm by which we live. Even the word “food” is a noun [in English]—it’s an object, it’s static, it’s lifeless, it’s dead. But in [Indigenous] languages, food is always a verb, in the sense that it’s derived from a verb. This is because for us, food is a dynamic, living process that is constantly in flux.

Can you give us an example of how food is dynamic?

But the word “food” [as a noun] isolates that nut from all those living processes. And when I think of the word food, I think of your kid in the back seat, and you throw them a bag of Cheetos—it’s just an object that you can put in a bag and eat.

That’s what sparked my interest in the intersection of food and languages—this yearning to go back to a more sane and sovereign lifestyle—and also this elder who inspired me to start examining how we could become leaders and set the record straight: We are not the primitive ones—the most primitive thing you can do is poison your own water. And the most barbaric thing you can do is use this life to dominate instead of love and uplift. [Indigenous people] learned through trial and error that those things don’t work. This society is still learning that.

Looking forward, what would a revitalized traditional food system look like, and what would be your part in promoting that?

Every homeland has a unique set of foods that the Creator placed there. In the Pacific Northwest, you have herring roe, seal oil, salmon, caribou perhaps, and other edible fruits and nuts and greens in the area. In my homeland, we live in the desert, and we also have a few mountains where we can hunt and gather berries and things like that—but we are very [focused on] seeds, corn, beans, squash, amaranth—the things that sustain us.

Were sheep a traditional part of the system there as well?

Yes—we have Indigenous desert sheep, mountain sheep, and then the Spanish brought their sheep, and the churro sheep is when those two created their own children. They created the four-horned sheep. So we have very special and unique meat sources.

If you live in the east—for instance, Kentucky—it would look like replanting the hickory, chestnut, walnut, acorn forests, and those mosaics that depended a lot on fruits and nuts. It looks like bringing the pawpaw back. I read in one study that there are 21 fruit trees that people enjoy in the Eastern Appalachian forests.

Persimmons—so many. So [what a revitalized food system looks like] depends on your biome. However, I do feel a responsibility to my own people—Diné—and I think that I could work most fluently there because I’m an insider. I’m allowed to lead there. If I go to other tribal homelands, it’s my job to follow the lead of those tribal members. 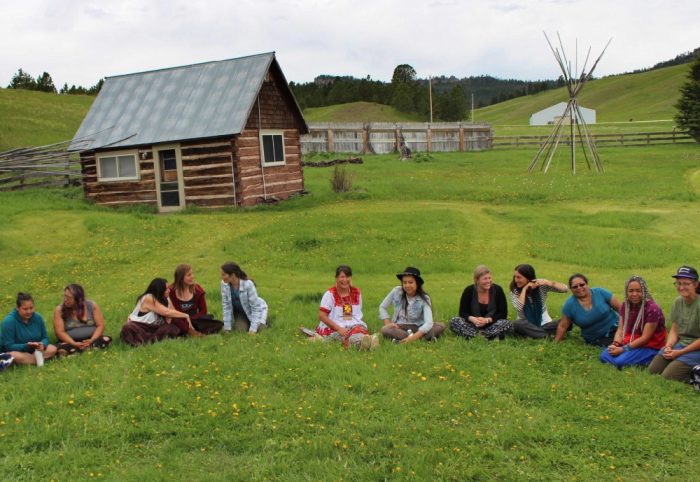 Water protectors of all persuasions gathered in talking circles at Borderland Ranch in Pe’Sla, the heart of the sacred Black Hills, during the first Sovereign Sisters Gathering. At the center are Cheryl Angel in red and white and on her left, Lyla June. (Photo by Tracy L. Barnett)

As of now, my plan is to go home, to Diné Bikéyah [in New Mexico] and to work with a cohort of people and just teach each other—bring the elders in, create a school. We have a seasonal school that we started for my master’s project and we can continue it, so that every season we’re getting teachings, we’re learning, we’re educating students in our way. And over time, we will develop a curriculum that we will improve and hone.

Ultimately, [we will be] creating a school that is more… I want to say, formal and more legitimate, that our children can go to. That teaches them the whole spectrum—because they need to know the traditional ways, and they need to know how to speak the colonizer’s language.

I’m hoping at the end of three years, four years, we will be fluent in our language and in our food system. And we will be operating as a team, and have a success story that other tribes can look to and model and be inspired by. Hopefully when I’m in my 50s or something, I’ll be part of a group that’s managing a whole school that doesn’t need federal funding or state funding, and doesn’t pander to western curricular standards.

To me that’s what food sovereignty looks like. It looks like increasing the amount of food we get from the land around us from 1 percent—which is probably what it is now for some of us—to 80 percent. I think 80 percent is a good objective to shoot for. And fluency—we will know inside if we’re fluent or not.

That’s the big vision. But right now, I’m apprenticing with elders who know about food. I’ll be spending a month with Rowen White who is a Mohawk seed saver; a month with Loretta Afraid of Bear, who’s a Lakota ceremonial foods expert; a month with an elder in Australia, who gets all of his food from the land around him, and a month with brothers and sisters in Quebec, who are hunters and are really connected to the Arctic food system. [I’ll be] learning from different people, trying to gain an understanding of the core principles that drive all sustainable food systems. And although they look differently in different contexts, finding those core principles.

I’ll be doing these apprenticeships for a year, and then I’ll be doing my own experiment in my homeland for two or three years.

Some of the things you’re talking about remind me of an agroforestry project I visited recently in Mexico—Via Orgánica. The people there are regenerating a really degraded landscape. I was impressed with the way that agriculture can actually be  a restorative process.

That’s exactly what I’m saying. My friend in Bella Bella, British Columbia—they have human-made kelp gardens that sustain the herring roe, which sustains the wolves and the salmon and the killer whales and everything around them. She says, “We don’t just want to sustain ourselves; that’s a low bar. We call it ‘enhanceability.’ We want to have the ability to enhance and leave the land better than how we found it.” That’s actually at the core of everything I’m talking about.

It’s not as hard as you might think. If you have the right action for a couple of seasons—the Earth actually wants to be full of life. That’s its nature. We actually have to work to get it to not do that. So if we just get behind her and breathe life into what she’s already doing, it can change pretty fast. But we need the tools, the skills, and the knowledge and most of all the wisdom that supports all of these things.

A longer version of this interview is available in The Esperanza Project. More on Lyla June can be found in the magazine’s Women of Standing Rock series.