Halal practice focuses on how animals are slaughtered, and often overlooks other questions about animal welfare. Now, a grassroots Muslim minority wants to change that. 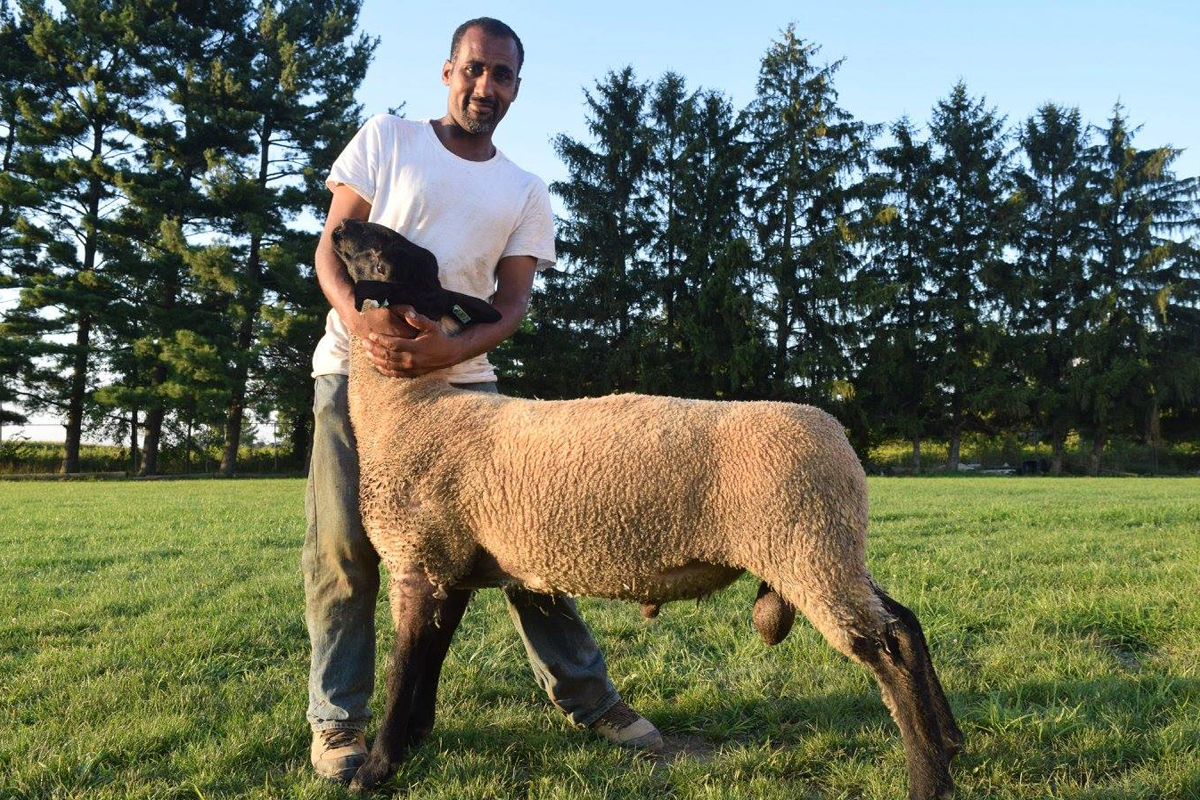 On a tidy two-lane road outside Columbus, Ohio, a hand-painted sign in red and white script hangs on the edge of a corn field. It reads “Bismi Allah Farms,” derived from the Arabic phrase “bismillah,” meaning “in the name of Allah,” or God, and a word said in reverence by practicing Muslims numerous times a day.

But “farm” is a bit of a misnomer. The four-acre operation, run by Ahmed Fram, a Moroccan immigrant and his family, is actually a licensed halal slaughter facility, where a centuries-old, sacred religious ritual converges with modern demand in a two-car garage retrofitted for the task. 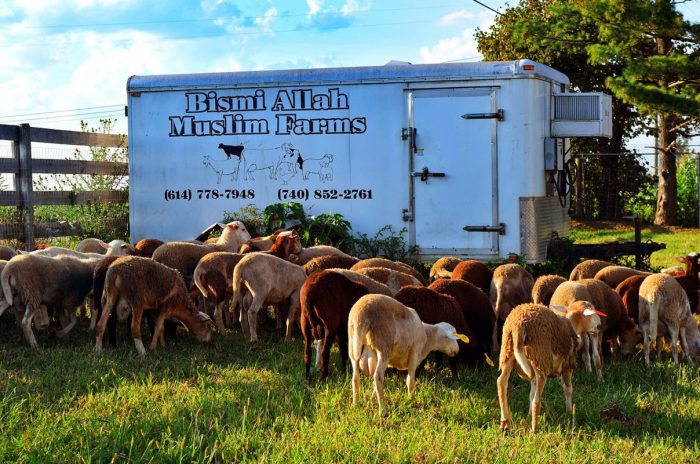 Goats, sheep, lambs, and the occasional cow meander through the barn or graze on nearby pasture. The operation was established in 2007 as an “accidental business” after Fram, a carpenter in his homeland, moved his family to the country in search of a tranquil space to grow.

“It wasn’t a business in the beginning; we were just helping each other,” Fram says about requests in those early years from community members seeking a place to conduct religious slaughter. “The numbers were getting big and we said, ‘We have to have a license for this.’”

Fram’s slaughterhouse caters to a diversity of communities in and around Columbus, Ohio, the state’s largest city. However, most customers are Muslim, says Soukaina Fram, Ahmed’s eldest child, who helps manage the business while enrolled in an animal science program at a nearby college.

Soukaina says that although halal meat can be found in groceries and specialty shops in Columbus, many clients visit Bismi Allah Farms for the direct connection to a guiding, sacred tenet of Islam, and for the chance to interact with the region’s growing Muslim community.

By 2040, Islam is projected to become the second largest religious group in the U.S., and the demand for halal meat and poultry, now a $20 billion market in this country, continues to climb.

However, the majority of halal certified meat and poultry sold in the U.S. is rooted in the conventional farm system. Because Fram buys livestock at auction for slaughter at Bismi Allah Farms, he knows little about how the animals were raised prior to their life on his property. It’s likely that many come from feedlots.

For some customers, that fact may be a sticking point. As increased scrutiny falls on conventional production facilities, the practice of isolating an animal’s slaughter from the rest of its time on earth is also being called into question by a small but growing Muslim minority. 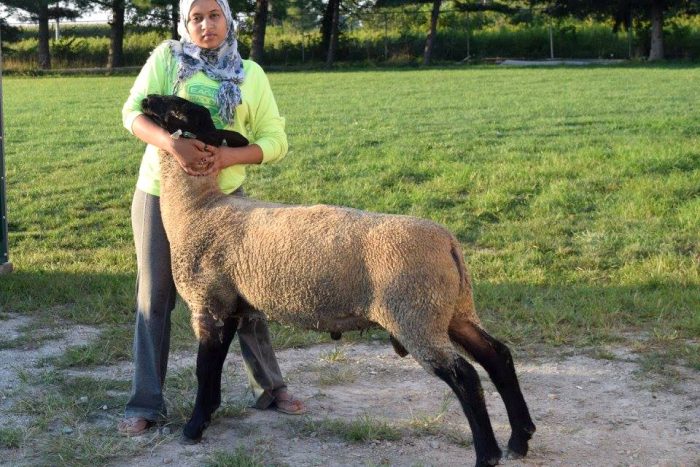 Every week, Ahmed Fram travels to nearby Hillsboro, Ohio to buy animals at a live auction. The livestock then live on his property until a customer hand-picks them for slaughter, which Fram says generally happens 30 to 40 times a week. Whether or not the animals were raised on pasture or finished in a feedlot isn’t particularly important to Fram as his work centers solely on the rituals of sacrifice. Halal is Arabic for “permissible” and certification requirements focus only on how animals are slaughtered and by whom.

In fact, only one of the many agencies that certifies halal slaughter practices in the U.S. pays explicit attention to animal welfare during the course of an animal’s life. The Islamic Food and Nutrition Council of America recently developed a voluntary five-star system to denote various attributes of certified halal livestock or poultry. One metric aligns with animal welfare standards while another relates to whether the animals consumed an all-natural, plant-based diet.

To be certified halal, an animal must be butchered with a cut across the neck from a sharp blade by a practicing Muslim. Also essential is the person’s recitation of the prayer, “Bismillah Allahu Akbar,” as the animal takes its last breath. “When you say the name of Allah, they will be ready,” Fram says regarding the sacred prayer. “They will be calm.”

Islamic dietary laws also require that the animal be free of unnecessary suffering during death. For example, in the minutes before slaughter, Fram ensures that his livestock do not see animal carcasses or the knife that will be used. Once dead, all blood must be drained from the animal prior to processing. 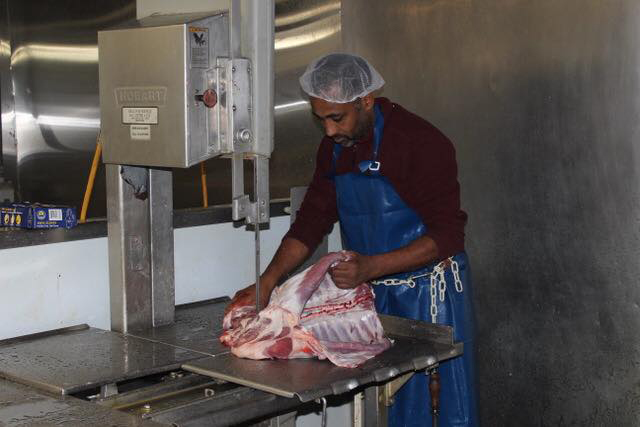 After slaughter, Fram butchers the meat into various cuts for his customers. Many freeze the protein to feed their family over weeks or months or save it for a special gathering. For others, the slaughter is an act made in honor of a birth in the family or a ritual marking the Islamic holiday of Eid al-Adha.

In Rock Tavern, New York, Halal Pastures owners Samer Saleh and Diane Aboushi promise that their food is “always tayeb” (also spelled “tayyib”). The Arabic word means “pure” or “wholesome,” but Saleh and Aboushi also use it to denote that an animal has been treated with respect during its time on earth.

“When we got married, we really struggled to find food that was truly halal,” Aboushi says about the couple’s search for meat that was also free of hormones and antibiotics and raised humanely on organic pasture. Thus, Aboushi, an attorney, and her husband, who works in finance, started Halal Pastures more than seven years ago to create a solution that aligned with their values.

“For us, it’s very important that from the moment the animal is born until the moment it gets to the dinner table, it has been treated with respect,” Aboushi says.

In addition to raising goats, lamb, and organic vegetables on their 14-acre property, Saleh and Aboushi source mostly organic and 100 percent grass-fed livestock and poultry from upstate New York growers whom they know personally. This supply chain is necessary to meet the growing local and national demand as Halal Pastures’ products are now shipped nationwide. According to Saleh, his company’s hybrid halal/organic/grass-fed production is limited otherwise. And yet, it’s also a return to a time-honored approach. 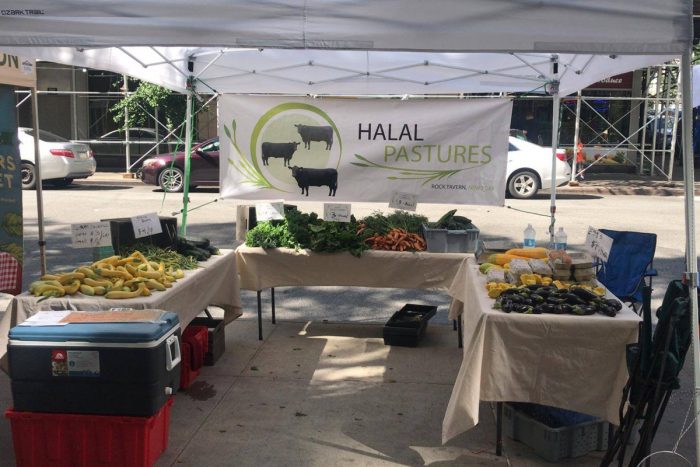 Friedlander points to the centuries-old development of Islamic legal traditions and the fact that animal agriculture operated in a very different context then. “Frankly, the kinds of practices that have become common would have been unheard of and possibly even unthinkable,” during the formative years of the Islamic legal system that governs dietary protocol, he says.

For this reason, Friedlander notes, Islamic laws don’t explicitly address practices common in today’s industrial farm systems such as animal confinement and intensive breeding. However, he identifies a host of ethical guidelines that apply to the treatment of nonhuman animals, which he says can “be brought to bear on the anomaly of industrial animal agriculture.” For example, the religion forbids animal cruelty, including confinement.

Febe Armanios, a historian at Middlebury College and co-author of the book Halal Food: A History, says that she and co-author Boğaç Ergene found a number of grassroots movements in the Islamic community seeking sustainable and humane animal husbandry in addition to halal slaughter.

“What we found–especially in North America and Europe–is that there is a noticeable and increasingly vocal minority that believe to be a good practicing Muslim one ought to pay attention to how an animal was raised from birth until the moment it was put to slaughter,” Armanios says.

This minority is extremely diverse and decentralized, she says, and consists of scholars, activists, farmers and general consumers. “Paying attention to the humane ways in which an animal was treated, they argue, is very much in line with the injunction in the Quran to eat what is wholesome and what is halal,” Armanios adds.

In Halal Food, the authors identify organizations like Green Muslims and Green Ramadan as entities engaging American Muslims in considering how faith is rooted in environmental stewardship. Armanios and Ergene write that groups like these are “using tayyib to promote… a new halal conception that endorses mindful eating practices, green farming, composting, recycling, and awareness of one’s carbon footprint.” 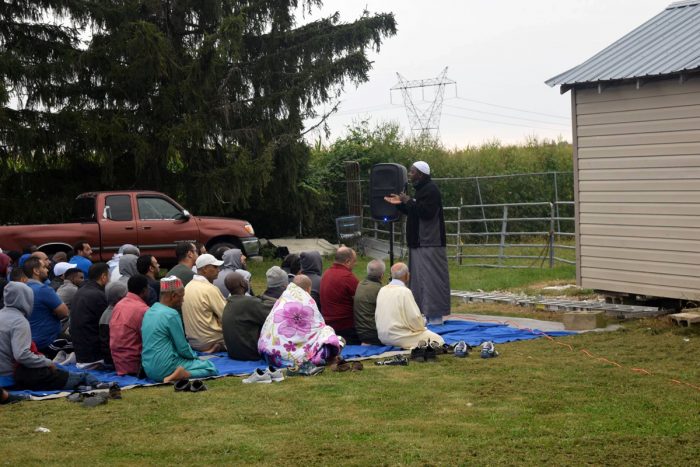 Armanios and Ergene also point to thinkers such as Ibrahim Abdul-Matin, a New York-based writer and activist, as part of this vocal minority. The author of Green Deen: What Islam Teaches about Protecting the Planet, Abdul-Matin advocates for non-industrial animal production practices and the humane treatment of animals prior to slaughter.

“It’s a movement within Islam, but it is in clear dialogue with what’s going on with the food movement more broadly,” Armanios says, noting the growing movement in Western food culture pushing for transparency in food production.

In Halal Food, Armanios and Ergene point to one recent economic study that showed rising demand for organic food that also meets halal standards. Consumers sought these products not only in the global West but also in economies across the globe like Indonesia, Saudi Arabia, Malaysia, Bulgaria, Turkey, and Kyrgyzstan, according to the study.

Halal Pastures’ Saleh and Aboushi, who fall squarely in the grassroots minority identified by Armanios, say that they hope to see more enterprises like theirs that align organic and grass-fed meat and poultry production with Islamic values.

Honest Chops, a butcher shop with a burger restaurant in Manhattan’s East Village, is another standout in this minority, says Friedlander. The business hand-cuts organic beef and lamb as well as cage-free chicken—all certified halal. Business has been booming, Friedlander notes, with increased interest from the wider community. 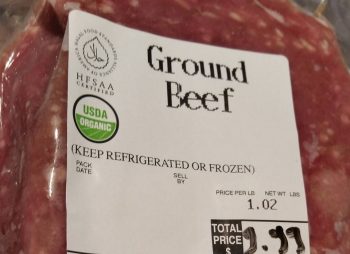 Because Americans have long been accustomed to inexpensive meat and poultry, the economics of organic, grass-fed and humanely raised products do present a challenge, Friedlander says.

“Whether you are talking about halal meat or not, what we need is systemic change in our food system so that we can actually have meat from ethically raised animals that doesn’t cost more than what an American family can afford,” Friedlander states. The systemic change needed, he says, is centered on the development of policies that better support and incentivize sustainable production practices. It would also be helpful if consumers embraced the consumption of less meat in their diets, Friedlander further reflects.

In Halal Food, Armanios and Ergene also write about this economic tension, noting that some Islamic scholars oppose the minority’s focus on animal welfare prior to slaughter due to the potential of a cost-prohibitive product. The authors note that for these scholars, “…calls to follow a greener and more organic lifestyle … are unreasonably onerous and thus challenge Islam’s core egalitarian spirit.”

Back at Bismi Allah Farms, Ahmed Fram contemplates the idea of rearing the animals from birth that he slaughters on his farm rather than purchasing them at auction. Fram remarks that he’s considered the notion, but it isn’t economically viable without expanding his business, and that’s unlikely to happen any time soon.

That’s when his daughter, Soukaina, chimes it. “Catch me in 20 years,” she says with a smile. “I’ll be doing that.”