Institutional Food Has a Sourcing Problem. This Coalition is Trying to Fix It. | Civil Eats

Institutional Food Has a Sourcing Problem. This Coalition is Trying to Fix It.

Three companies control more than 75 percent of food service purchasing at universities, hospitals, and more. Farmers, workers, and students are urging Aramark to invest in just and sustainable food practices. 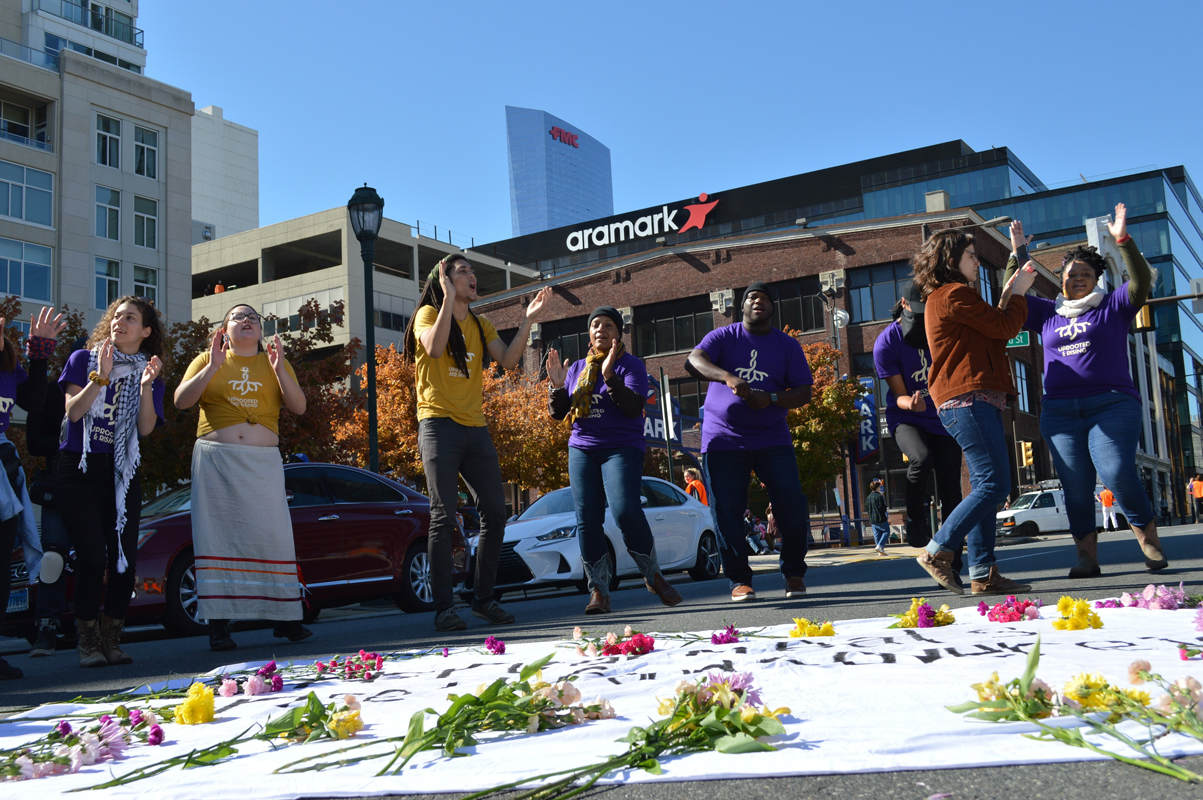 Earlier this week, a coalition of students, farmers, ranchers, fishers, and food workers rallied outside the Philadelphia headquarters of cafeteria operator, Aramark, to demand the corporation invest in more just and sustainable food systems. About 60 demonstrators then delivered a petition to Aramark with over 100,000 signatures, according to the Community Coalition for Real Meals, which organized the protest.

Their campaign targets a system of contracts and kickbacks between dominant food corporations and the three largest foodservice management companies, Aramark, Sodexo, and Compass Group. The intergenerational and multiracial coalition stresses how the business practices of such giants shut out local producers and contribute to racial and economic inequality, as well as to environmental degradation. (Disclosure: The Open Markets Institute, for whom the author works, has endorsed this campaign.)

“Aramark’s business model of entering into exclusive contracts with huge corporate food manufacturers pushes farmers and fishers off the land and water, perpetuates racial injustice, and drives down wages,” said Navina Khanna, Director of the HEAL Food Alliance, a coalition member, in a statement. “Their destructive practices are a threat to our collective future, and hit communities of color first and worst.”

Just three corporations control 77.5 percent of the business of operating cafeterias and restaurants at schools, corporate offices, hospitals, prisons, stadiums, and other establishments. Together, Aramark, Compass Group, and Sodexo spent at least $10 billion on food in 2009. They serve tens of thousands of outlets, many of which are “anchor institutions,” or large geographically-fixed entities like universities and hospitals that some policymakers–including several Democratic presidential candidates–have singled out for their ability to invest in local economies.

These foodservice management companies have come under fire for exclusive companywide purchasing contracts and deals with Big Food corporations. Cafeteria contractors like Aramark negotiate large contracts with suppliers to secure discounts, including cash-back rebates from food manufacturers. Companies like Tyson, Kellogg’s, and Pepsi may offer Aramark and others anywhere from 5 to 50 percent cash back on sales (though one investigative reporter said a typical rebate is around 14 percent). These rebates can get larger for increasing purchases of a product over time.

Foodservice management companies increasingly rely on these rebates as a source of income, according to a report by the Johns Hopkins Center for a Livable Future. To maximize rebates, food service corporations require that their many locations buy most of their food from vendors who have negotiated contracts, most of which include rebates. A report by Farm to Institution New England found that food service management companies typically mandate that their institutional customers purchase 80 percent of their food “on-contract.”

This system fundamentally limits individual institutions’ ability to work with local farmers and small businesses, who cannot supply companywide contracts or offer steep discounts in the form of kickbacks. Phillip Barker, a farmer in Oxford, North Carolina and founder of Operation Spring Plant which organizes Black farmers, says small farms like his have been cut out from larger institutional markets. Barker personally struggled when he tried to sell vegetables to Aramark in the 1980s. “Big companies keep small growers from selling anything in those schools. We are locked out, and corporate farms are locked in,” Barker says.

In addition to shutting out small and community-based producers like Barker, contracts with the world’s largest food companies prop up bad actors, critics argue. Several speakers at the demonstration in Philadelphia pointed to the environmental hazards of industrial animal production promoted by large meatpackers, including fires in the Amazon. Participants also condemned large meatpackers mistreatment of slaughterhouse workers, 28 percent of whom are immigrants or refugees, and 62 percent are people of color.

“I volunteered in Mississippi after the massive ICE raids … [and] I saw how big food companies exploit immigrant communities,” said Ofelia Sanchez, a grad student and organizer with Uprooted and Rising at the University of South Florida, where Aramark has a contract, at the rally. “These companies are the kind that Aramark buys from.”

The coalition wants Aramark, Compass Group, and Sodexo to purchase at least 25 percent of their food from local, humane, ecologically-sound, or fair sources, without a history of labor violations. They also want the corporations to reduce greenhouse gas emissions and purchases of industrially produced animal products by 25 percent.

Finally, the coalition asks Aramark and other foodservice companies to “invest in racial justice and equity” by prioritizing purchasing from farmers of color and investing in infrastructure to help them get to market.

Both Barker and Sanchez said these infrastructure investments for communities that have historically been underserved are critical to give them a chance against large corporations. “In order for these farmers, these producers of color, to actually be able to step up to these contracts with universities, they are going to need support and infrastructure,” Sanchez said. “Companies like Aramark should be investing in that because they’re in our community, they’re here, and they should invest money into it.”