As the federal government cuts back on support for conservation, a new report points to how states are already stepping up. 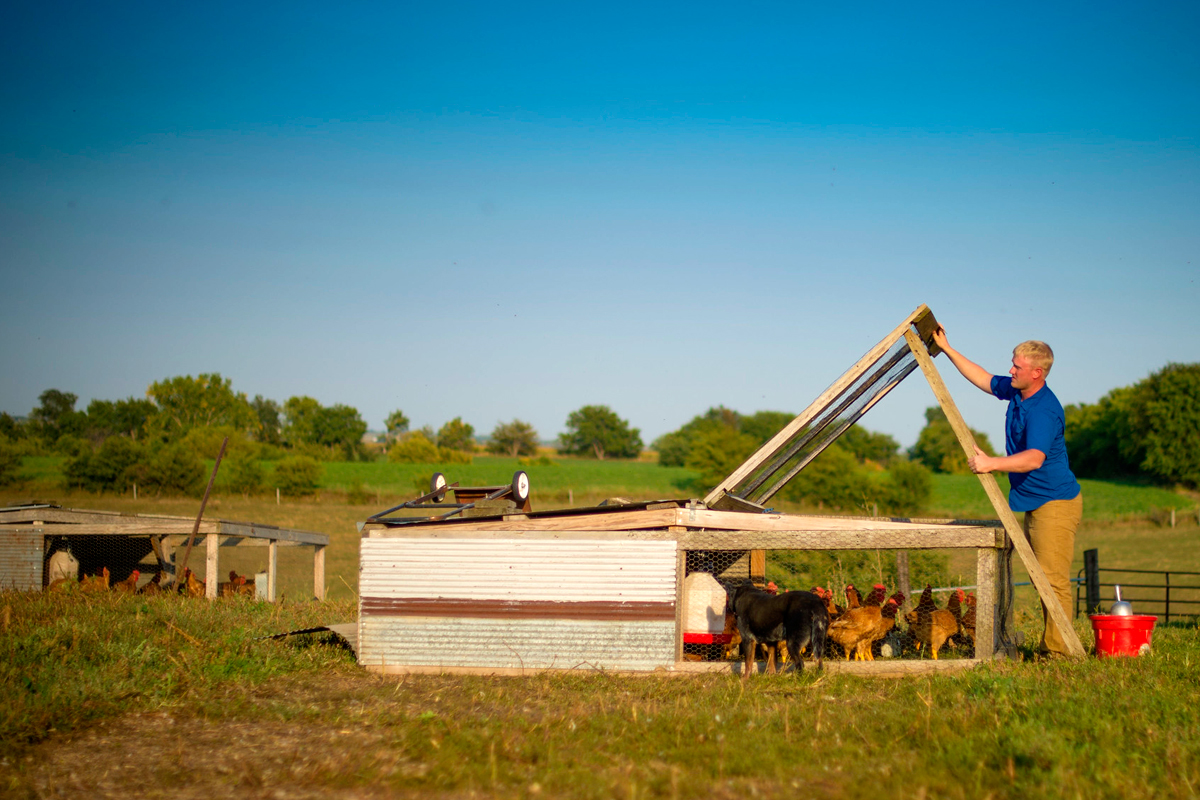 Joel Erickson grows corn, soy, oats, and alfalfa and raises beef cattle with his family on 1,500 acres of land in Southwestern Minnesota. Last spring, he used a $25,000 loan from the Minnesota Department of Agriculture’s AgBMP Loan Program to buy a compost turner. He started using it over the summer and immediately noticed the process was faster, more efficient, and required less fuel than what he’d been using before.

“It’s also a more concentrated product. The nutrient value of the compost is higher than the raw manure, so we’re hoping to cut down on commercial fertilizer,” he said. “And we’re hoping if we put it on some hay, it will make that whole crop healthier, which means healthier feed for our cattle.”

Erickson is quick to see benefits like lower fertilizer costs and healthier livestock, but AgBMP loans are also intended to serve a larger purpose: cleaning up the state’s water. Compost builds healthy soil and reduces dependence on nitrogen fertilizers, which in turn can reduce the runoff of excess nitrogen into waterways.

In Minnesota, the program has issued loans for over 14,000 conservation projects since 1995. Farmers have used the influx of cash to do everything from planting buffer strips to upgrading manure-holding bins, and as they repay their loans, the money goes right back into the Clean Water State Revolving Fund, making more money available for more farmers.

Programs like this one, which use creative pathways to fund and enlist farmers in agricultural conservation, are the subject of a new report aimed at calling attention to the various ways states are innovating so that others can follow suit.

“It’s not exhaustive… we tried to home in on funding sources and financing tools that were showing strong innovation in a few different states, and that also showed opportunity for replication,” said Maggie Monast, who works on economic incentives for agricultural sustainability at the Environmental Defense Fund (EDF), and is a co-author of the report. 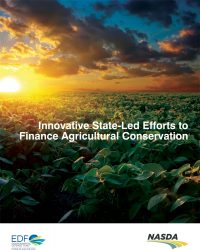 The report was produced in collaboration with the National Association of State Departments of Agriculture (NASDA), an organization that represents the commissioners, secretaries, and directors of agriculture in all 50 states, and its official release was part of a bigger focus on addressing environmental issues at the organization’s annual meeting in September.

At a time when federal funding for conservation and soil health is static at best, and efforts to increase it resulted in several battles during the passage of the last farm bill, this state-level interest is no coincidence. And the momentum suggests that while some farmers and ranchers have signed on to support a Green New Deal, action on agriculture and climate may have a better chance of picking up steam within state governments. A handful of states have recently passed soil health bills that incentivize carbon farming practices, for example.

“States are incubators for new and creative ideas and programs, and what we do in the states is scalable,” said Glenn. “Everything starts in the states.”

How States Are Innovating

The authors of the NASDA report looked at how states are encouraging farmers to adopt agricultural best management practices like reduced tillage, crop nutrient management, and erosion and sediment control. But rather than focusing on the practices themselves, the report digs into how states are funding the programs, and how they’re structuring incentives to get farmers to use them.

For example, Nebraska charges pesticide registration fees to fund its Buffer Strip Program, while Michigan charges fees on both pesticides and fertilizers used in the state to fund the Michigan Agriculture Environmental Assurance Program (MAEAP). Established more than two decades ago and officially signed into law in 2011, that program helps farmers reduce pollution from their farms by evaluating their practices and helping them make changes to better manage manure and prevent erosion. The Michigan Department of Agriculture and Rural Development incentivizes farmers to participate by offering a “verification” that recognizes the farmer as a leader in environmental stewardship. In May, the department celebrated giving 5,000 farmers verifications.

Other states, including Minnesota, Iowa, and Delaware, use revolving funds to issue loans and then invest the repayments (with interest) back into the accounts. In this way, the pot of money available continues to grow.

Iowa’s Cover Crop-Crop Insurance Demonstration Project, which offers farmers a $5 per acre refund on their crop insurance for planting cover crops, is featured in the report as an example of a revolving fund with a creative incentive structure for farmers. “What’s really cool is that almost all farmers [in Iowa] have crop insurance,” Monast said, “and because the incentive is implemented through crop insurance, you have access to many more farmers.”

In the first year of the program, more than 700 farmers planted cover crops on nearly 170,000 acres, and as of early 2019, the program was on track to more than double that number. Although it may be a drop in the bucket of the 26 million acres of cropland in Iowa, report co-author Mark Rupp, EDF’s director of state-federal policy and affairs for ecosystems, said that the program’s early success already seems to have inspired a neighboring state.

“Illinois likely saw what Iowa was doing and wanted to try something similar,” he said. The program is starting out with funding for 50,000 acres of cover crops in its pilot year.

Creating farm conservation programs at the state level also results in targeted initiatives that fit the local agricultural economy, the authors said. Commodity soy and corn dominate the landscape in both Iowa and Illinois, for instance, and cover crops could have a huge impact there, since they reduce the kind of erosion that contributes to both contamination of local waterways and dead zones in the Gulf of Mexico.

A program in Delaware, on the other hand, which has a large poultry industry, focuses on loans for poultry producers to reduce pollution from excess waste. “We see states leveraging the resources they have as well as trying to tailor things to the unique challenges they have,” Rupp said.

Limitations at the State Level

Of course, some see limitations to these kinds of state initiatives, starting with the fact that they’re all based on incentives, not regulation.

“Iowa’s got voluntary program on top of voluntary program, and they have what most people would regard as a water crisis. The industry is really good at shutting down regulation and steering the debate toward voluntary programs,” said Patty Lovera, the food and water program director at Food & Water Watch.

Lovera pointed out that most of the programs, for example, incentivize small tweaks to standard production methods, as opposed to investing in alternatives to industrial agriculture, like diversified, organic, and regenerative systems. The Delaware program, for example, helps poultry producers manage the waste that often ends up in waterways as a direct result of raising animals in high concentrations in confinement. (Poultry companies like Perdue and Tyson are required to guarantee the loans.)

“If we’re talking about CAFOs, we need to have a conversation about why we have them,” she said. “If these are polluting practices, why are they allowed to happen at all?”

Another challenge to state agricultural conservation programs is figuring out how lasting their impacts are. “One of the challenges that we highlight at the end—whether the program is structured in an innovative way or a more traditional way—is measuring environmental impact and cost effectiveness,” Monast said. The number of acres of cover crops planted, for example, doesn’t explain how much environmental benefit results from those acres planted.

Going forward, EDF will be working to get the report into the hands of state officials and legislators to continue to conversation.

NASDA, meanwhile, says the report is the first step in a long-term plan to focus its policy goals on environmental conservation and climate change. At the meeting, California agriculture secretary Karen Ross (supported by Colorado commissioner Kate Greenberg, among others) introduced a new “Agriculture, Resiliency, and Climate Adaptation” amendment to the organization’s policies; NASDA members voted unanimously to adopt it.

“We have the pressures of the farm economy and the pressure of our trade issues, and the weather disasters over the last two to three years have just been immense,” said Barb Glenn, NASDA’s CEO. “So, we have been looking for a way to bring forward our collective voice on both resiliency and solutions to these issues through climate adaptation programs.”

And that will have to happen at both the state and at federal level, she said. “One of the roles that our members take is that they’re loud voices for the contributions that the farmers and ranchers make in their state,” Glenn said. “We work in very close partnership with the federal government.”

It’s hard to know what that could look like at a time when the Trump administration is focused on rolling back environmental policies across the board, even as Democratic presidential candidates are calling more attention to climate change and offering proposals to make agriculture a climate solution.