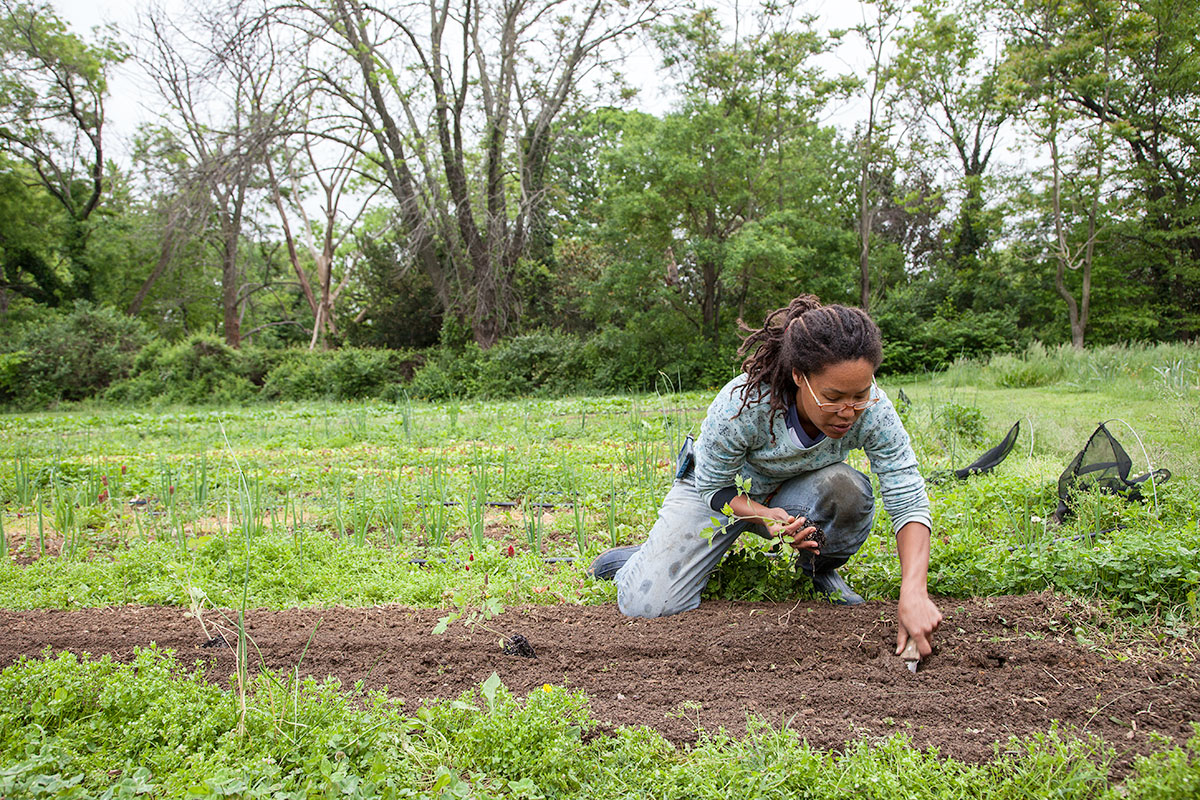 With her background in advocacy, welcoming smile, air of refinement, and down-for-doing-business demeanor, it would be easy to assume that when Gail Taylor visits Capitol Hill in Washington, D.C., every Wednesday, she’s going to meet congressional staffers for high-stakes legislative deal making.

But instead of heading into the halls of Congress in a power suit, Taylor drives into the parking lot of a condo complex near the U.S. Capitol, where she pitches a tent, sets up tables, and unpacks heaps of vegetables. On a recent day, they included orange and purple carrots, dark green cucumbers, heads of green cabbage, green beans, and a milk crate of hardneck garlic. This mid-summer week, she also has baskets of blueberries, red gooseberries, yellow plums, heirloom tomatoes, Presidio rice, and bags of hand-milled flour.

Then she awaits the arrival of 25 of her community supported agriculture (CSA) subscribers, who’ve signed up to retrieve their weekly share from Three Part Harmony, a farm she established three-and-a-half miles from the White House. 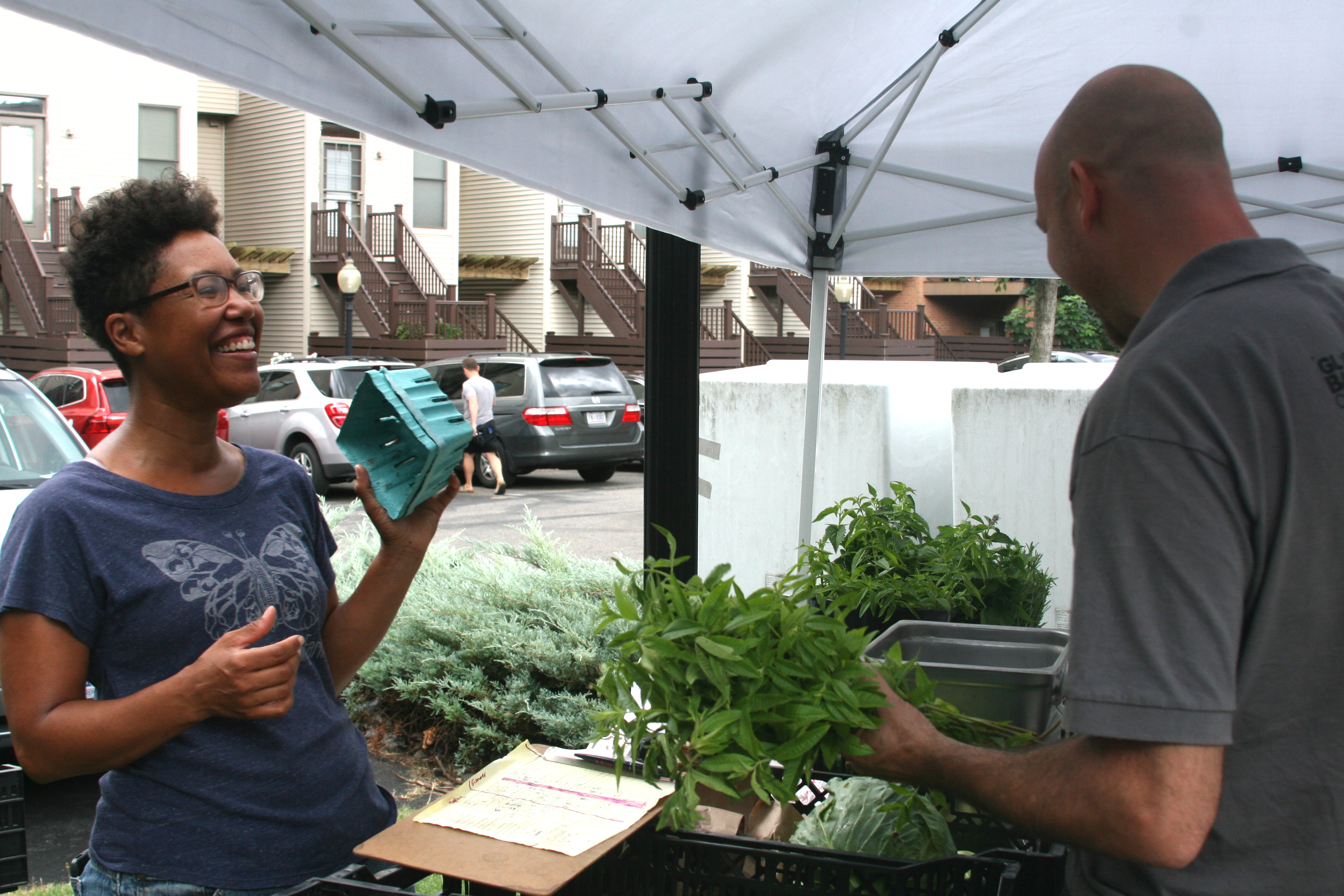 Taylor at a CSA pickup site in the city. (Photo by Cassie Chew.)

“I started with six CSA members on my porch, and now we do almost 200 shares, three days, and seven locations,” Taylor says.

Taylor’s efforts have not only led to the first production-focused organic farm and CSA accessible by bus or bike to D.C. residents. They have also led to the passage of legislation encouraging D.C. landowners to give their property over to agricultural purposes, helping make the nation’s capital a more friendly place for urban farms. 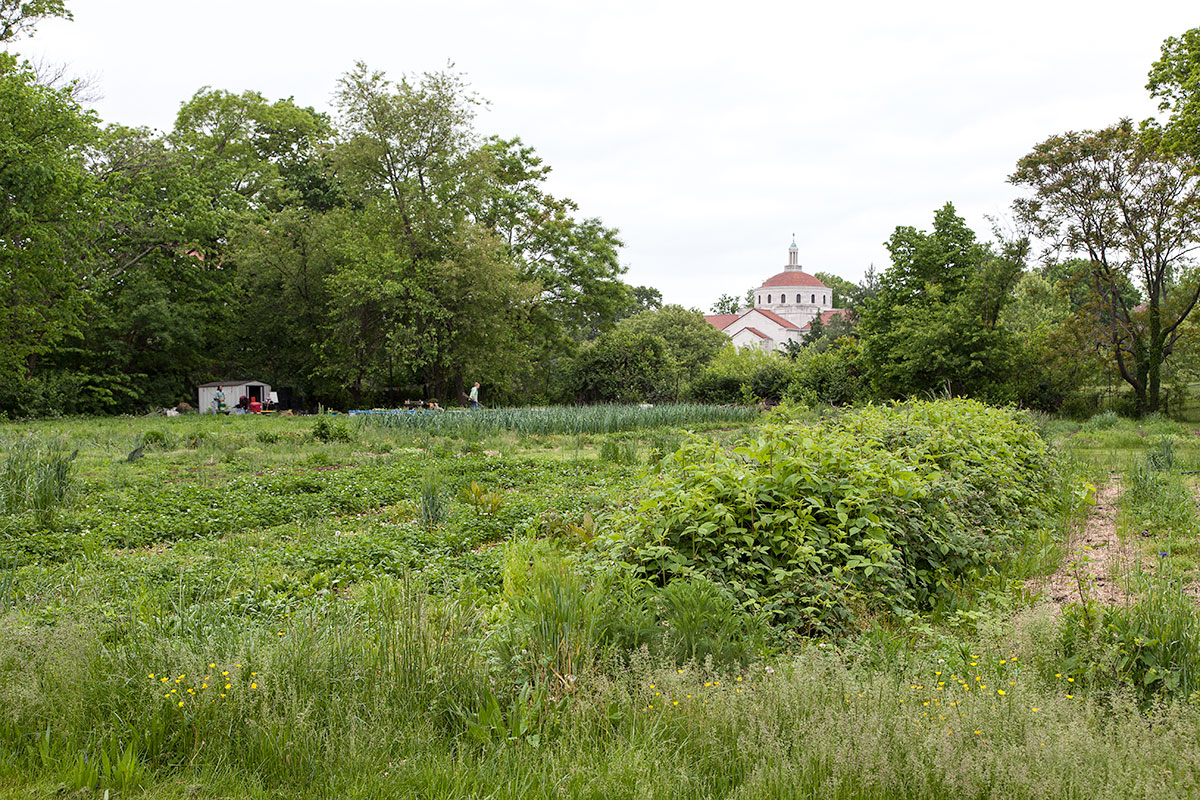 District Councilmember David Grosso helped Taylor in her policy work. “She set up a model that wasn’t just about community gardens, but more about the expansion of urban farming, to grow quality food closer to the source of consumption,” he said. “It wasn’t about sharing a plot; it was bigger than that.”

Marla Karina Larrave, an advocate for justice in food and farming policy and Three Part Harmony CSA member, says, “She’s definitely the people’s farmer. In terms of farming, you’re talking to the most awesome person in D.C.”

Returning to the Land

Taylor’s venture into farming took root during a self-described “quarter-life crisis.” With a degree in U.S. foreign policy and Latin America, she worked as a human rights advocate before quitting to spend nine months in Guatemala on a project to promote healing among women recovering from the trauma of civil war.

Then, instead of continuing a career path in diplomacy when she returned, Taylor signed up to volunteer at a food co-op. A vegetarian since her teens, she wanted to learn more about food and have enough to eat while she was unemployed. She also began volunteering at an organic farm in rural Maryland.

“I was doing a lot of weeding and transplanting and more weeding,” Taylor said. “I loved it. I was like ‘Oh my gosh, I never have to turn on a computer again.’” 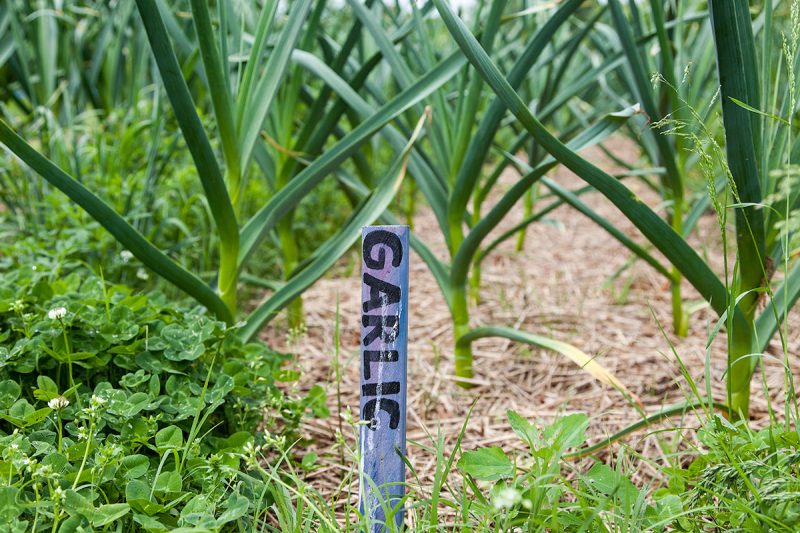 A dozen years later, her passion for farming has become her profession. “My favorite times this year were when I went to the farm on a Saturday afternoon, locked myself in the fence by myself, and worked until the sun went down,” she says. 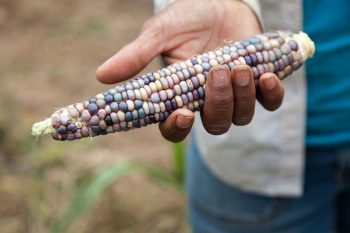 With farmers on both sides of her family tree, Taylor’s connection to the land runs deep. But Taylor doesn’t see her pivot into agriculture as unique to her personal family history. Rather, it’s something she shares with many African Americans, who despite family histories of farm life that include exploitation, are rediscovering the land, redefining their role in the profession, and recognizing the power of food production in revitalizing their communities.

“I’m in part of this return generation—young Black farmers who are returning to the land after having skipped a generation,” she says.

But in order for Taylor to make her newfound mission to provide organic fruits and vegetables to her adopted community in D.C. a sustainable operation, Taylor also had to rely on her diplomacy skillset.

The “I Want D.C. to Grow” Campaign

During her years as a farm hand, Taylor rose from volunteer to member of the vegetable crew to co-manager for the farm. In that time, she learned the most successful strategies for growing vegetables in the D.C. region, where warmer temperatures alter the growing season, as well as how to run that farm’s 485-member CSA.

But after five seasons, Taylor grew tired of the 90-minute round-trip commute. With ideas on starting her own organic farm that she could bike to, she found a two-acre plot of unused land owned by the Oblates of Mary Immaculate, a Catholic order of missionaries.

Within D.C.’s 68 square miles, small plots of land then were being cultivated to grow food to donate to low-income residents. There also were gardens set up to teach people how to grow vegetables. “But at that time in 2012, we didn’t have a farm in D.C. that was dedicated solely to production,” Taylor says.

While the Oblates supported her mission, their attorney worried that leasing the land for a commercial farm could subject them to a property tax assessment. Passed down to Taylor, the bill could make it hard for her to get a farm up and growing.

“We needed a lower property tax rate on land that was in agricultural use, which actually is a model that people have done all over the country since the ’70s to save family farms,” Taylor says. 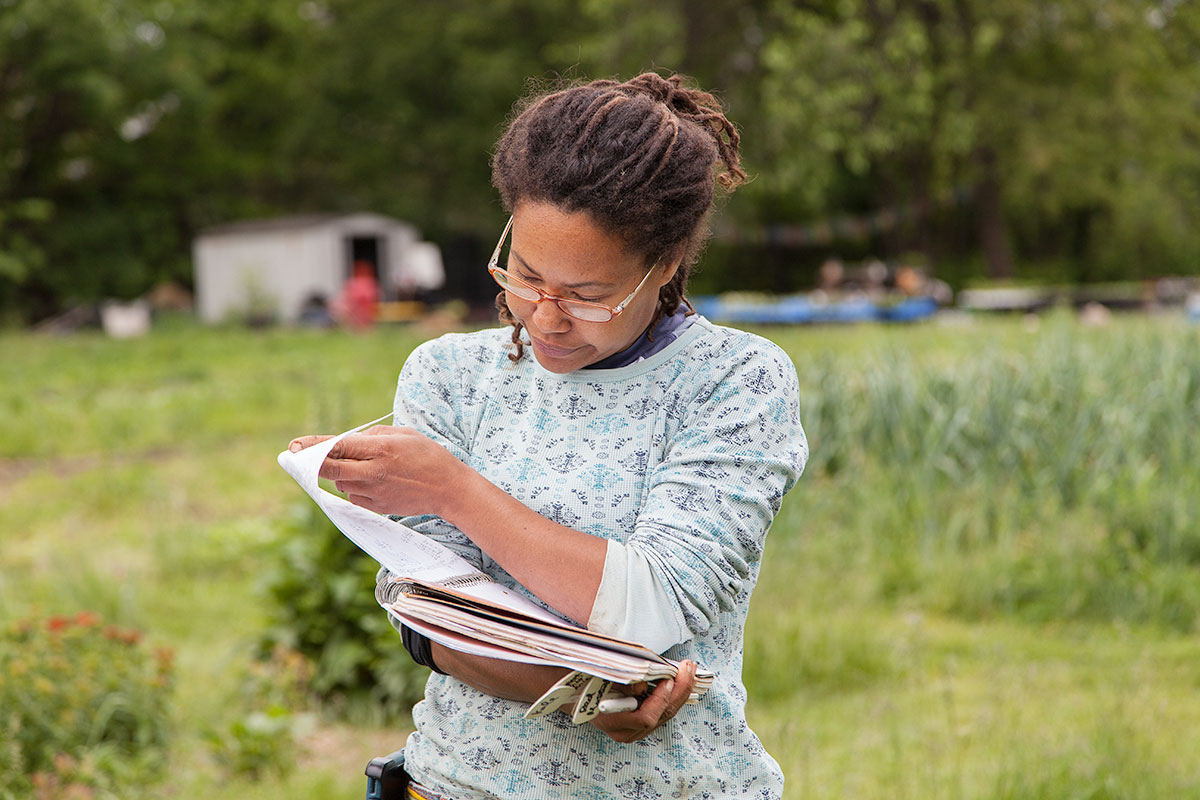 While hauling in compost to build up the farm’s soil, Taylor simultaneously worked with Councilmember Grosso, students at a pro bono legal clinic, and food and farming advocates on “I Want D.C. to Grow,” a policy campaign designed to support her own goal as well as others interested in farming in the city.

Their efforts led to the passage of the D.C. Urban Farming and Food Security Act, which allows a 90 percent reduction in property taxes to owners of vacant lots who create partnerships with independent urban farmers. Known locally as the “D.C. Farm Bill,” the legislation allows property owners who are exempt from taxation to pass the exemption to the farmer. It also allows would-be growers to submit proposals for leases to cultivate unused public land.

When the D.C. Farm Bill took effect in April 2015, Three Part Harmony became the first farm to benefit. Now, the policy is poised to clear a path for more urban farming in D.C. In 2020, the city’s tax and revenue department will implement the abatement procedures for property owners, says Ona Balkus, food policy director at the D.C. Office of Planning. Balkus is excited about the potential more production farms on unused city property, and even on rooftops.

“Once the urban farming tax abatement goes into effect, private properties will be eligible for the tax credit if they lease their land or their rooftops to urban farms,” Balkus says. “Given the high price of land in D.C., rooftop farms on new real estate developments are a promising way to bring more fresh food to District residents.”

A year after requesting proposals, the city is expected to finalize five-year lease deals with two applicants this fall. Jeremy Brosowsky, who since 2010 has run a business that provides compost to urban farms, is one of those applicants. He credits the “I Want D.C. to Grow” campaign for making his idea possible.

“If this program didn’t exist, the farm couldn’t exist,” Brosowsky said. “Gail is an important advocate for the community and a talented and relentless urban farmer.”

Organic Production in the City

During the years she spent working on the D.C. Farm Bill, Taylor couldn’t sell any of the vegetables she was growing on the Oblates’ property. To earn start-up money, she built a greenhouse in her backyard and began supplying starter plants to local hardware stores and neighbors operating community gardens. She also launched a small, porch-style CSA, which she ran by growing vegetables in her backyard and in the backyards of friends and neighbors. 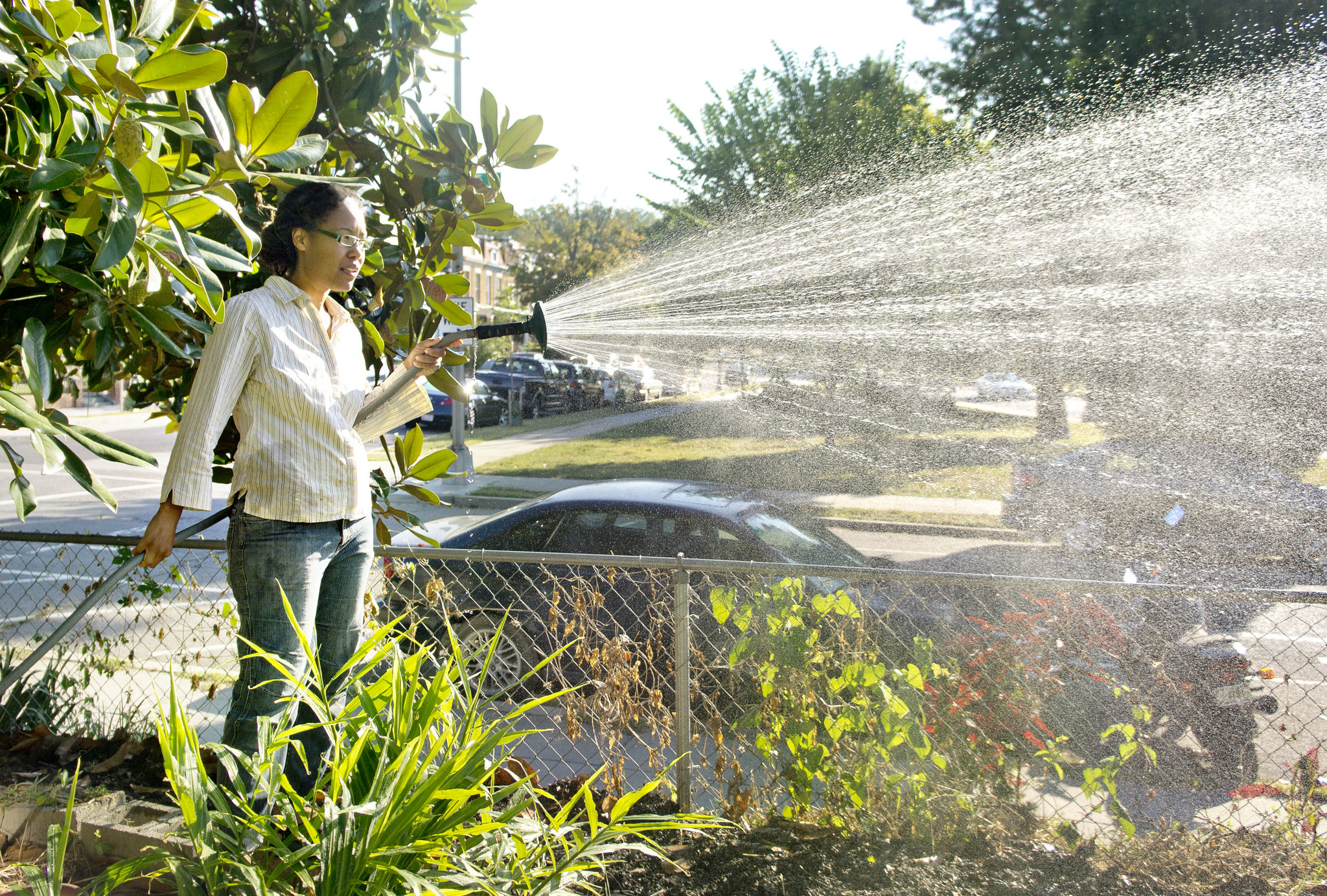 Taylor watering plants the first year she did a backyard CSA by riding her bike around to three different plots each week. (Photo by Helina Chen.)

Heading into its eighth season, Three Part Harmony offers pesticide-free vegetables, herbs, and cut flowers. Designed as an “edible landscape,” the cultivated rows on the farm’s two-acre plot feature three-foot walkways to allow visitors to “get up close with their food.” Taylor’s technique also includes the companion planting of crops that enhance each other’s growth. She might plant a row of bunching onions and come in three weeks later with romaine lettuce.

“We’re constantly putting in things that can share space together,” Taylor says.

To add nutrients and organics to the soil and allow it to rest between plantings, Taylor also plants a third of the farm with oats, rye, and crimson clover as cover crops, or “green manure.”

Three Part Harmony takes its name from her father’s often-repeated description of the collaborations her family of musicians created together. Its organic growth is due to efforts of the community of friends and neighbors Taylor has cultivated who come together and do their part, she says.

In addition to volunteers who help with the harvest, some CSA members donate their front porches to Taylor to help with distribution. 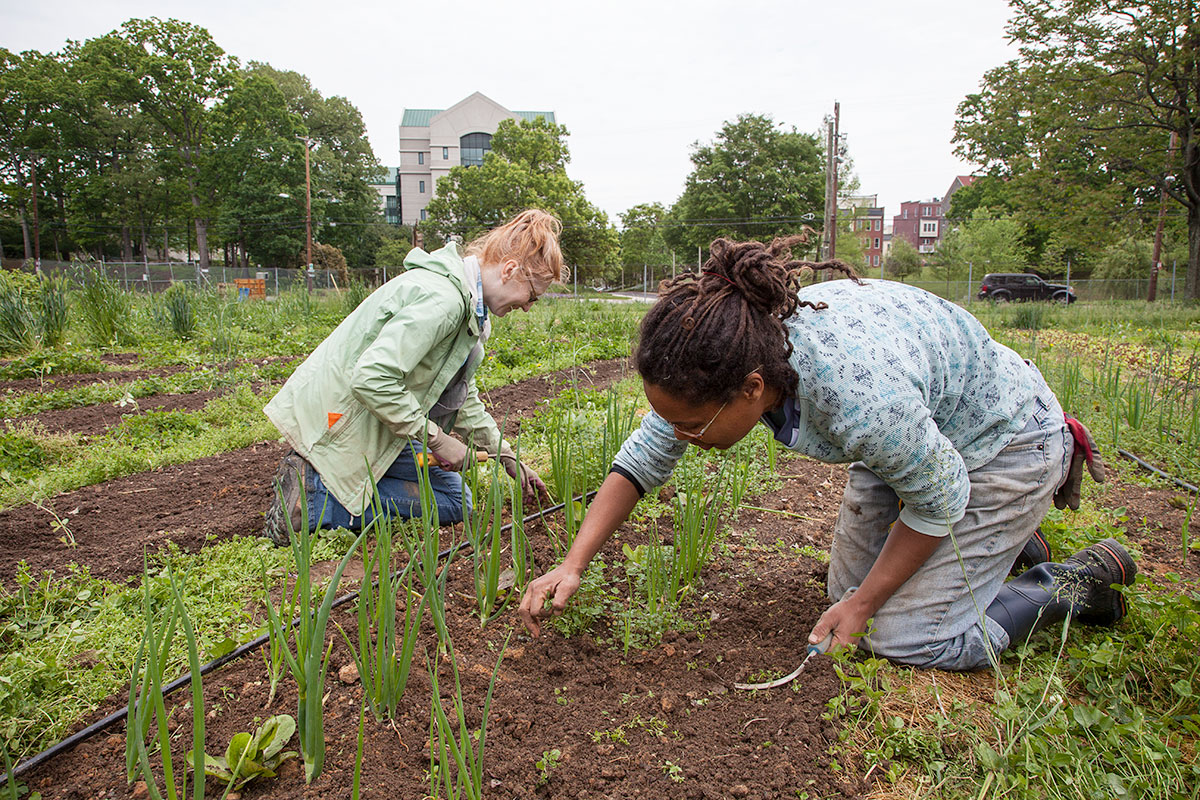 Gail Taylor and a helper work on the farm. (Photo © Lise Metzger.)

They also help build the farm’s online presence and offer professional bodywork to help Taylor and her two part-time farm hands recover after long days of planting and harvesting. A family member created the farm’s logo, which pays homage to the Monarch butterfly and Taylor’s family’s path during the Great Migration.

Taylor has enlisted nearby orchards and farms run by women and farmers of color to add variety—products like fruit, cheese, honey, rice, herbal items, and eggs—to her weekly CSA menu.

“Two years ago, when we went from under 100 members to over 100, my staff and I went around to all of those farms and said, ‘We want to scale up. This is what we need,’” recalls Taylor.  “That was the first time [other farms] started setting aside some of their acreage and growing just for us.”

One of those growers is Gale Livingstone, a former government IT contractor, who met Taylor at a conference for new farmers. They bonded over the novelty of being young African American women launching production farms. Livingstone began providing organic eggs and vegetables for Taylor’s CSA.

This season Livingstone has relocated to a three-acre plot of land closer to D.C. “My long-term plan is that I’m trying to buy some land in Maryland—a much larger piece of land—so that I can incorporate animals into my operation,” Livingstone says. “I’m hoping to have Gail become an integral part of that—she’s super-organized and is great at managing people, which is one of the areas that I tend to need help with.”

In addition to scaling up her CSA, Three Part Harmony has also donated food to soup kitchens and food pantries. Through her efforts at the farm and within the community, Taylor aims to build an operation that disrupts the historical racism and oppression upon which food systems have been operated, provide alternatives to corporate-based food production, and meet the community’s needs on a deeper level. 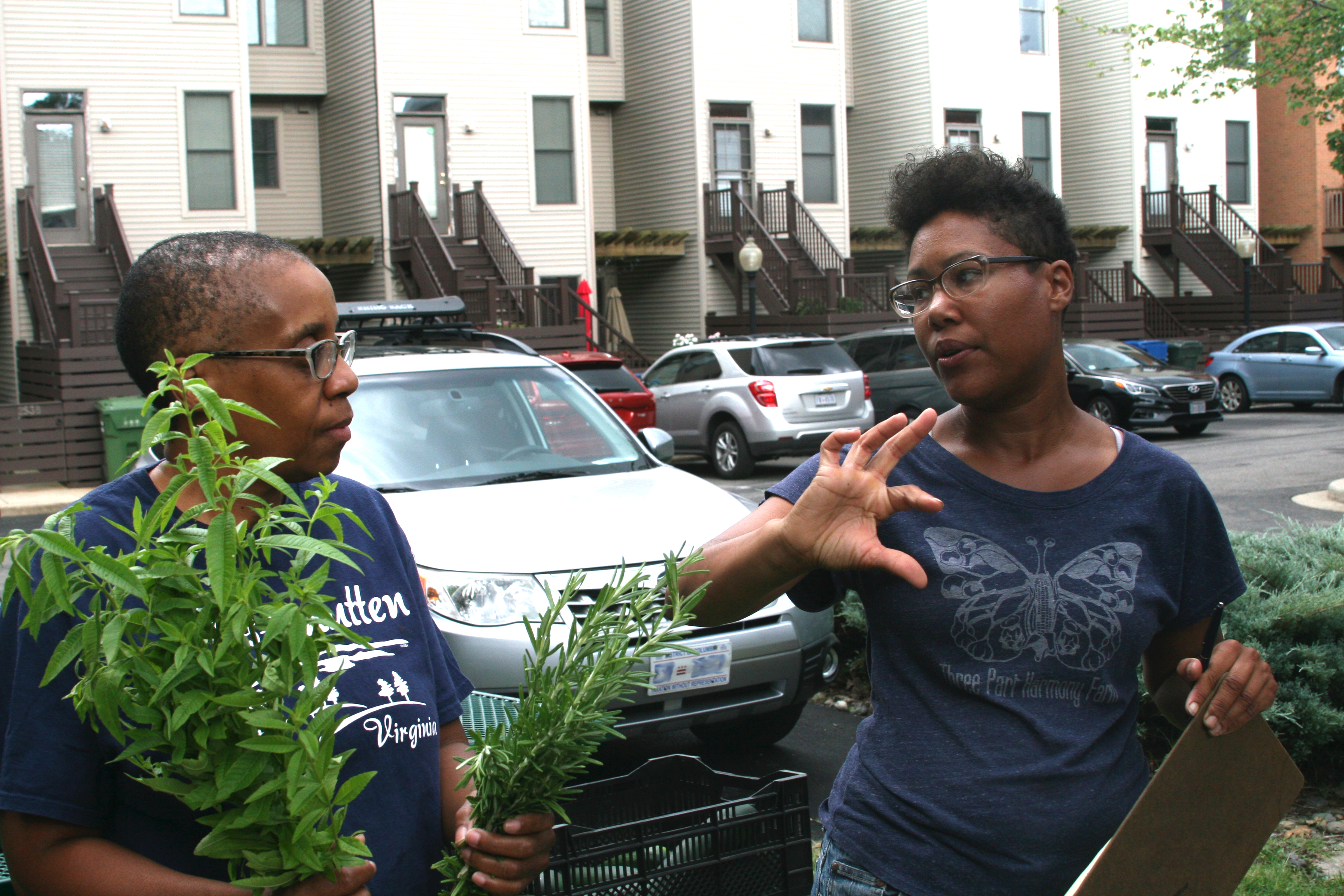 As residents within cities like D.C. seek greater food options and policy makers look to urban farming and community supported agriculture to solve challenges such as malnutrition, health disparities, and disinvestment in urban communities, Taylor’s work can serve as a model of urban farming that’s innovative and member-driven.

“People are going out of their way to support this CSA. They’re not saying, ‘I paid this much and this is what I’m getting out of it,’” Taylor says. “A lot of people are saying ‘I paid this much money, and I’m supporting these Black women farmers.’ We’re two right now, but maybe one day there will be more.”