Can Big Ag Be Part of the Climate Solution?

The U.S. Farmers and Ranchers Alliance, which represents agriculture's biggest trade groups, has gone from not mentioning the words "climate change" to promoting farmers' role in mitigating it. 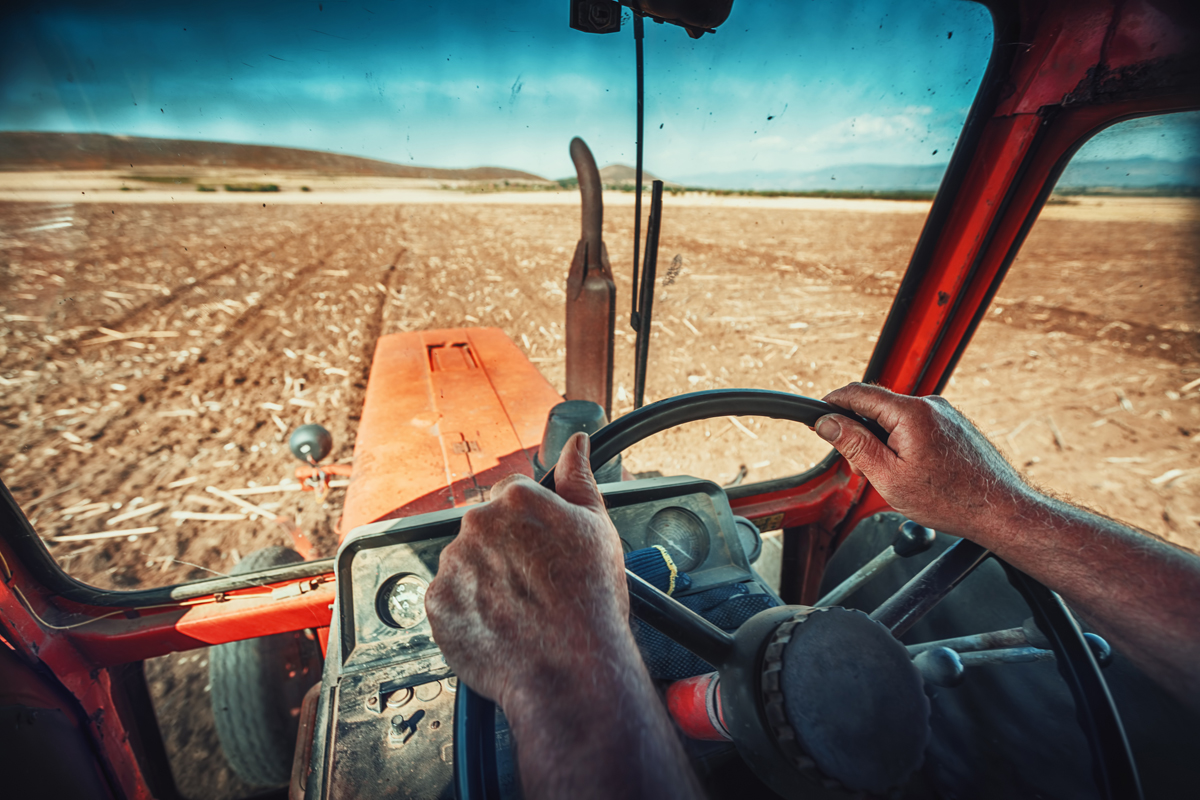 Farmer Jay Hill nearly walked away from it all. It was 2011, Hill was on the verge of bankruptcy and public opinion about farmers’ impact on the environment was wearing him down. He was contemplating leaving the farm operation that began with 10 acres from his father at age 16, and that he has grown in the last two decades to 18,000 acres across two Southwest states.

“I thought, ‘Why the hell am I doing this?’” Hill recalled in an interview with Civil Eats. “I get on social media and see, ‘The farmers are destroying the environment and ruining waterways.’ And I think, ‘Look at all the things I’m trying to improve on and am improving on.’”

But Hill stayed, and today says he is deeply committed to leaving behind a sustainable farming operation for future generations. He believes he can sequester carbon in the soil, and has used cover crops, no-till farming, and a range of technology to reduce his carbon footprint. Subsurface irrigation pipes will soon improve efficiency, and sensors already catch leaks before they grow severe, saving 1.2 million gallons of water per day, he says.

Hill’s story—or a dramatic version of it that’s “inspired by actual events”—is featured in a new publicity campaign called 30 Harvests from the U.S. Farmers and Ranchers Alliance (USFRA), a group that represents many of the nation’s top commodity associations, meat producers, and agribusiness corporations. In the campaign’s video, Hill and his family put their farm up for sale and stay the night in a motel, where the sleepless farmer steps into the all-night lobby to hear a fellow farmer describe on a television news segment the urgent need to farm differently. He and his family return to the farm, and he tears the “For Sale” sign out of the ground.

Now, Hill is the public face of a campaign that positions farmers as heroes in the climate crisis—a campaign that marks a significant departure for USFRA.

The group—which was founded in 2010 in response to the Food, Inc.-watching public disenchanted with the destructive environmental and health impacts of factory farming—is new to the climate change conversation. From the get-go, USFRA has been a PR effort focused on bolstering Big Ag’s public image, and has sought to tell positive stories that “reshape the conversation” about agriculture to the tune of tens of millions a year. Climate change hasn’t fit into that story.

In fact, in a 2017 report focused on sustainable farming, USFRA noted how various farming sectors have reduced their environmental impact, carbon footprints, and greenhouse gas emissions, but in the course of 44 pages, mentioned climate change itself only once—when discussing media coverage of government regulations.

The 30 Harvests campaign, on the other hand, goes all in on climate, arguing that farmers can both solve climate change and feed the world, which is expected to be home to 9.7 billion people by 2050—or 30 crop seasons from now.

“If you had to take a bet on a sector to get this done, you have to bet on people-based change. This is a group that actually cares about the topic,” Erin Fitzgerald, the CEO of USFRA, told Civil Eats, adding, “Farmers are on the front lines, feeling the first effects of climate change. And they are also the solution.”

While the sustainable agriculture groups Civil Eats spoke to praised USFRA for joining the climate conversation, some also raised questions about what type of fixes the group will end up pushing for, and whether its efforts can—or are intended to—actually move the needle on making modern food production a part of the solution.

“Who is developing and owning the solutions? They really should be driven by farmers and frontline communities, and it’s not completely clear to me that that’s what’s going on,” Sarah Hackney, coalition director for the National Sustainable Agriculture Coalition (NSAC), told Civil Eats. “I want to see evidence that a farmer’s story is not just being used for a campaign.”

The Science of Sequestering Carbon

The idea of sequestering carbon in the soil is receiving a great deal of attention at the moment. Regenerative is replacing the word “sustainable” in many circles, and an array of people in the public and private sector are pushing ways to invest in carbon-friendly farming and step up its rates of adoption around the U.S. And it’s not hard to see why.

A recent report summary from the Intergovernmental Panel on Climate Change (IPCC) outlined the dire prospects for the global food system in the face of climate change—and the need for better land and soil management to mitigate that threat. Though agriculture accounts for up to 25 percent of global greenhouse gas emissions from human sources, according to the United Nations Environment Program, a range of farming practices have the potential to hold carbon in the soil.

In a report that accompanies its new campaign, USFRA notes that U.S. soils store 100 times more carbon than the country emits in a year. USFRA also cites a study from the National Academies of Sciences, Engineering and Medicine (NASEM) that says that the agriculture sector is on track to reduce greenhouse gas emissions by 46 percent, given today’s technology. With additional innovation and investment, the sector could reduce emissions 147 percent, making them net negative.

The USFRA report synthesizes data and assessments from an array of sources, in addition to NASEM, the Environmental Protection Agency, the U.S. Department of Agriculture, and United Nations groups including the IPCC, along with academic researchers. The report’s diagnosis of both the climate problem and other ills facing farmers is robust; and yet the report’s suggested solutions are mostly limited, with a focus on calls for additional research and greater partnerships.

The purpose of the campaign, said Chip Bowling, the chairman of USFRA, is to show that farmers are already taking actions that sequester more carbon and reduce the environmental impact of farming.

“We want them to see what a real-time farmer looks like. The public still thinks that the farmer is in a bib watching the cows graze,” Bowling told Civil Eats. “What is really happening is we have precision fertilizer placement and precision irrigation. We have climate-controlled houses for our cows and chickens. We have tractors that are using GPS technology.”

With the precision agriculture market poised to grow from $4.8 billion in 2018 to $10.2 billion in 2024, it’s clear that there’s a lot of money to be made in selling precision agriculture tools to growers, including the data services that help manage production inputs. But not all the solutions to climate change have a business benefit. More complex challenges, such as reintegrating a perennial crop into the landscape, don’t increase profit margins, even though they sequester significant amounts of carbon.

Given this fact, Hackney, the coalition director for NSAC, says, “There’s a little bit of tension between, say, the business case for climate mitigation and what the science tells us is most needed for impacts and results.”

Lauren Langworthy, a farmer who is also the interim executive director of the Midwest Organic and Sustainable Education Service (MOSES) shares similar concerns. She operates a 153-acre farm raising sheep, hay, and cover crops in Wheeler, Wisconsin, and was encouraged to see USFRA discussing climate change. But Langworthy believes that farmers also need a network of peers to rely on for information and advice, and they need market and regulatory structures that incentivize them to adopt climate-friendly practices. It’s not clear whether the companies behind USFRA are interested in making that happen.

“The [30 Harvests] video implies that just by the farmer choosing to stay there everything is going to be resolved,” Langworthy said. But she notes that none of the issues farmers face are actually fixed in the video—climate change, the market forces, the financial pressures. “He just felt the weight of being a farmer and feeding America. I think that’s a dangerous method to keep putting farmers in a position where they are tasked with saving the world and we aren’t giving them the tools to do so.”

To pay for climate change solutions and lower the risk of transitioning to more sustainable practices, farmers will have to rely on financial incentives. In California, the money for those incentives is coming from the taxes the state imposes on polluters for the emissions they release; a coalition of groups has advocated for a portion of those funds to go to farmers who practice carbon farming. Over the next year, $12.5 million will go to support those efforts.

Renata Brillinger, the executive director of the California Climate & Agricultural Network (CalCAN), says USFRA should support similar measures to back up its rhetoric.

“They need to get behind a federal campaign to price carbon. I don’t see any other way to achieve the potential in agriculture without that. There’s got to be money,” Brillinger said. “Farmers have to stay in business. I don’t think we as the global community can ask them to store carbon on our behalf without recognizing that there’s a cost to that.”

Fitzgerald, the CEO of USFRA, said the group cannot take positions on policy, such as a price on carbon. However, the American Farm Bureau Federation, which is represented on the USFRA board, openly opposes policies that would tame carbon emissions, including taxes on carbon uses or emissions, mandatory cap and trade provisions, EPA regulation of greenhouse gases, and any requirements for the agricultural sector to report those greenhouse gases.

Producers of these crops and animal products can, of course, find ways to improve efficiency, reduce inputs, limit soil erosion, and even sequester carbon in the soil. But whether these types of large-scale operations can be truly regenerative is another question altogether.

Sara Tiffany, the senior manager of Climate Smart Farming at the California-based advocacy group Community Alliance with Family Farms (CAFF), says she sees USFRA as “trying to pair together corporate interests and farmer interests,” and adds: “At CAFF, we really don’t see it that way at all.”

Tiffany encourages the small and mid-sized farmers she works with, some of whom chose farming specifically to play a role in climate mitigation, to see their farms as integrated agro-ecosystems in which a diversity of plants, insects, microorganisms, and other creatures cycle nutrients in a closed-loop system. That creates healthy soil—and sequesters carbon.

Large farms tend to be more industrialized and mechanized, with more monocultures and less opportunity for crop rotation and diversity, Tiffany added.

“When you look at certain aspects of agribusiness and industrial agriculture, it’s extremely reliant on synthetic inputs like synthetic nitrogen and agrochemicals for synthetic pesticides and herbicides,” Tiffany said. “Any farm can take a step in the right direction to be part of the solution, but a lot of our problems of extreme soil degradation and loss of fertility and productivity have been because of those methods.”