Will Climate Change Mean Less Farming in the West?

Colorado and California are rethinking water management for a hotter, drier future, while balancing urban water needs with the benefits agriculture brings to rural communities. 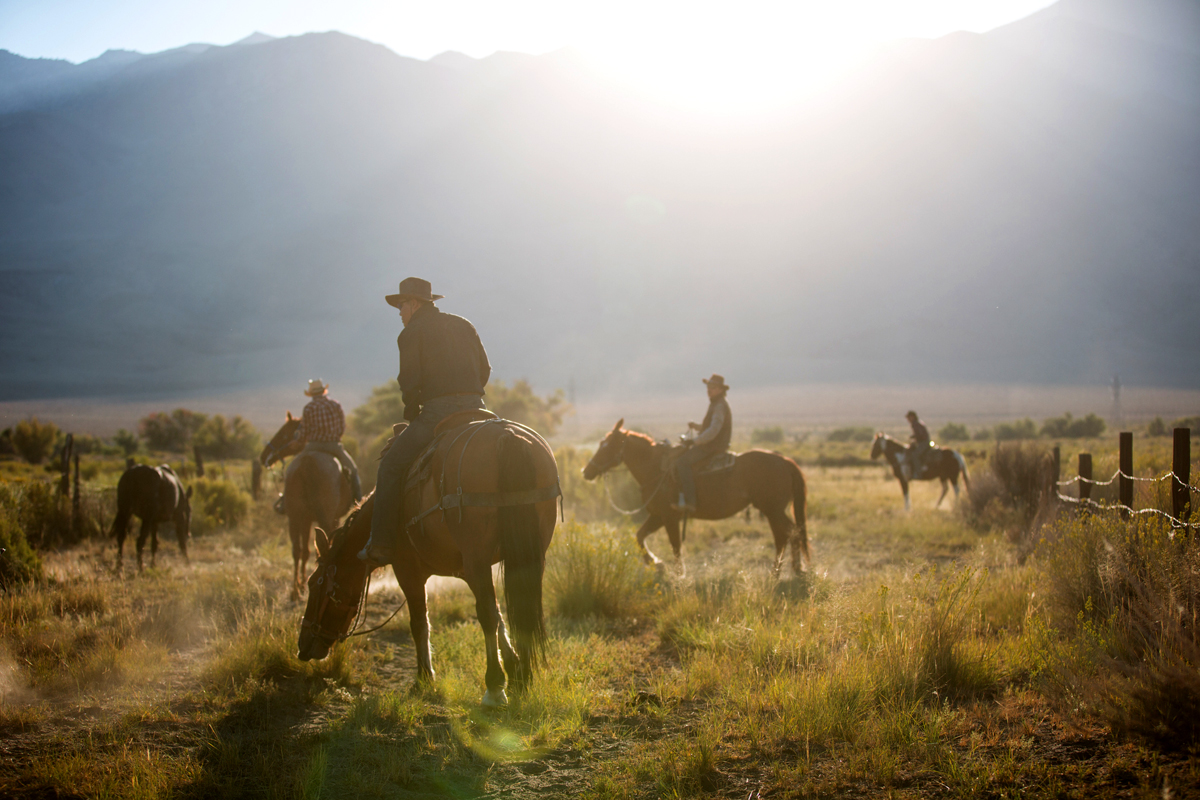 Most years, ranchers in Wyoming irrigate their land with water from the Green River—a tributary of the Colorado—in the summer so they have forage to feed their cattle late in the season. In 2016, however, George Kahrl of Sarah Faith Ranch in Jackson, stop irrigating several of his fields in exchange for a check.

Kahrl raises cattle on 5,000 acres, and he was one of several ranchers in the area who agreed to turn off the water in several of their paddocks in July—after they’d cut their hay.

Doing so required the rancher to plan ahead, says Cory Toye, Wyoming water and habitat director at Trout Unlimited, a conservation nonprofit that worked with the state on the pilot. “They are spreading water sooner, spreading water faster. And a few of them in one drainage in particular saw their yields go up and then saw more native grass instead of some of the water-dependent grasses that have taken root through over irrigation.”

The change was put in motion thanks to a pilot program that was designed to scope out the possibility of paying farmers and ranchers to use less water.

The massive Colorado River Basin—which includes “America’s Nile” as well as the spiderweb of tributaries that feed it—supplies water to more than 35 million people and 4.5 million acres of land in seven states throughout the Southwest. Although 2019 brought more precipitation than normal, ending a 19-year drought in Colorado, climate change means the overall trend is toward warmer, drier conditions. The reservoirs in the basin—Lake Mead and Lake Powell—have dropped to dangerously low elevations in recent years and the basin’s southern states have all agreed to use less water in a 7-year drought contingency plan.

Back in 2015, the four largest municipal water providers in the basin—the Central Arizona Water Conservation District, the Southern Nevada Water Authority, the Metropolitan Water District of Southern California (MWD), and Denver Water—saw the writing on the wall. That’s why they joined forces to pay farmers and ranchers to change their practices for a limited period of time.

The goal of the pilot program was not actually to save water this time around, but to test out whether or not farmers and ranchers would be open to trying—and to see if their doing so would actually result in more water making it into Lake Powell and Lake Mead.

The three-year Colorado River System Conservation Pilot Program (SCPP) started out modestly, with just 15 participating farms and ranches the first year, but grew quickly as farmers realized they could earn passive income for changing their irrigation patterns, turning off the water they diverted from the river earlier in the year when it carries more snowmelt, and—in a few cases—fallowing some fields all together. Overall, the pilot funded 45 projects and cost $4.5 million. And although it came to an end in the summer of 2018, it may return in an improved format at some point in the future. 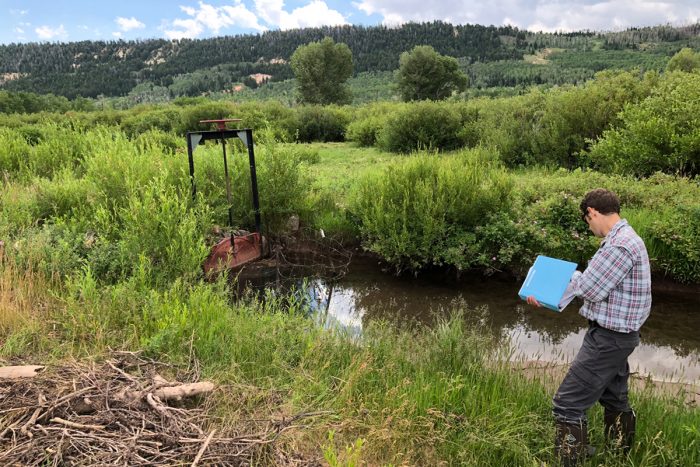 Charlie Ferrantelli with the Wyoming State Engineer’s Office on a field visit to an SCPP participant’s headgate. (Photo courtesy of Trout Unlimited)

“People have been leasing water around the western United States for years,” says rancher George Kahrl. But on the upper portion of the Green River, which winds through Wyoming before joining the Colorado River in Utah, it hasn’t ever been done quite like this.

As a result, he and other ranchers in the program had to think differently about the way they managed their pastures. But the $150-an-acre payout was worth the sacrifice. And Kahrl was glad to see the program boost the economy. “That money will circulate here and help with rural development, because we don’t have a lot of resources [in Wyoming] other than minerals,” he says.

Shepherding the Water to the Reservoirs

Trout Unlimited’s Toye says he and his colleagues approached wary farmers with the opportunity back in 2014. “We were able to go to existing relationships and say, ‘You know, it’s probably worth looking into, it’s temporary,’” recalls Toye.

However, ensuring that the water has a pathway back to the reservoirs has proven to be a more complex endeavor. Throughout the West, water rights go back generations and some property owners are considered “senior rights holders.” In Wyoming, for instance, this designation gives a rancher the right to use as much water as they need while it’s running past their property. Because the pilot program was voluntary, unless all the land owners on a given tributary participated, what one person left in the river may have simply been used by their neighbor. “Shepherding” is the current buzzword, says Toye. “And every state in the basin is definitely battling that problem.”

On the bright side, several ranchers banded together, including four of them in the Upper Green, Toye says. “They all worked together to develop a management plan so that conserved water could be delivered downstream.”

Nicholas Walrath, the Green River Project Manager at Trout Unlimited, says farmers are motivated by a desire to pre-empt regulation that would dictate how much water they can use—and they want to see their families stay on the land as the current generation prepares to retire. “A lot of historical ranches are drying up and bought by out of state people. Those are the only buyers right now for these big ranches.”

Because farmers and ranchers use an estimated 80 percent of the water, they are central to the larger discussion about water use, says Doug Kenney, director of the Western Water Policy Program at the University of Colorado, Boulder. “It’s clear that agriculture is going to have to use less water. It’s the only way to make the numbers balance,” says Kenney. “The question is: How painful will the process be?”

One commonly used solution, called “buy-and-dry,” involves an urban water district buying up vast chunk of farmland land all at once. This the easiest way to secure a large chunk of water, says Kenney, and it usually takes place when farmers are ready to retire. But, he adds, “it’s painful for the broader rural community that depends on farming income. If all the farmers sell out, the community can go broke.”

Environmental groups like Trout Unlimited are opposed to buy-and-dry deals, because in the upper basin states—Wyoming, Colorado, and Utah—working agricultural land tends to be more hospitable to wildlife and fish than subdivisions do, so keeping farmers and ranchers on the land offers much wider benefits. 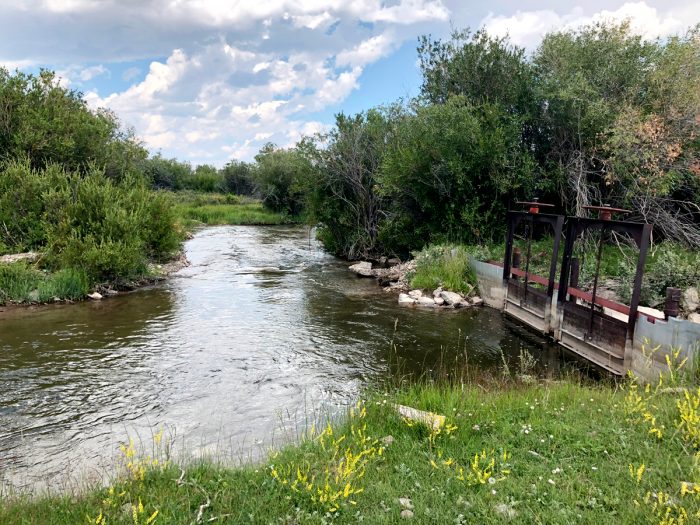 So, efforts like the one in Colorado basin could be a win-win, if everyone involved can iron out the details. “The thought is, the farmers fallow some of their fields but still do okay, the rural community might take a bit of a hit but the farms are still operational, there are still jobs and incomes there, and the cities get the water they need, and you can reduce overall demands on the system so that the water budget is brought more into balance,” says Kenney.

In California’s Central Valley, where groundwater pumping for urban and agriculture use is depleting the state’s water reserves, causing land to sink, and cutting off wells and other water infrastructure, similar discussions are taking place about how to work with farmers to reduce their water footprint. Ellen Hanak, a senior fellow at the Public Policy Institute of California (PPIC), a nonpartisan policy think tank, says the challenges in the Central Valley and Colorado River Basin are similar, in that in both cases a very large system “has to go on a water diet.”

In 2014, California lawmakers passed the Sustainable Groundwater Management Act (SGMA), which will require local water users to “bring groundwater use to sustainable levels by the early 2040s.” In many of the state’s water basins, the SGMA will require that some farmland be used for other purposes—such as creating riparian corridors or generating solar electricity. In a recent report, PPIC estimated upwards of a half million acres, or 10 percent of farmland could be idled over the next few decades.

“This is one of those problems where irrigation efficiency—applying less water to the same crop—is not really a solution,” says Hanak. “In fact, sometimes with irrigation efficiency you end up with denser crop cover and the crops may use more water. So, what you really need to do is shift to crops that use less net water or take some land out of production.”

Rather than stopping farming all together, Hanak believes the most effective approach is to allow farm-to-farm trading to “make water count as much as possible for the regional economy.” In the cases where farmers have senior water rights and less-optimal cropping conditions, they may be willing to sell some of that water to someone else. High-value fruit and nut tree crops will also probably continue to be the first choice for most farmers, while some annual row crops like alfalfa, corn, and cotton are likely on their way out.

Either way, Hanak adds that while getting its groundwater house in order will cost the state a short-term reduction in income and jobs. She also admits that, “it’s likely that we’re not going to see the footprint of California irrigated agriculture grow.”

In the end, the big question may be how to rethink water management for a hotter, drier era without losing the many benefits that agriculture brings to rural communities in the West.

“Most of the groups that we work with are definitely looking for alternatives to agriculture going away,” says Trout Unlimited’s Toye, adding that any demand management program has to include input and buy in from the agriculture community—which is why temporary, voluntary programs appear to be the best way forward for now.

George Kahrl sees a lot of potential value in the Colorado River Basin program, but takes issue with the program’s design. “Why not let us manage for 10 percent more efficiency in the best way we see fit?” he asks. Not watering a plot of hay for a whole season can make it hard to bring it back the following year, he adds. Instead, he would have liked to see the money invested in helping farmers buy more efficient irrigation equipment, such as pivots.

Kahrl also points with frustration to the fact that expanding cities are seen as a given, while agriculture is being asked to scale down and become more efficient. “It’s a way to put more water in the pipeline, but it doesn’t do a lot to diminish the [urban] growth at the other end of the pipe. We have no more water up here now than we did in the 1870s, but there’s a much larger demand.”