Nearly 40 percent of coal jobs disappeared over the past decade. The Appalachian Beekeeping Collective is offering West Virginians a new future. 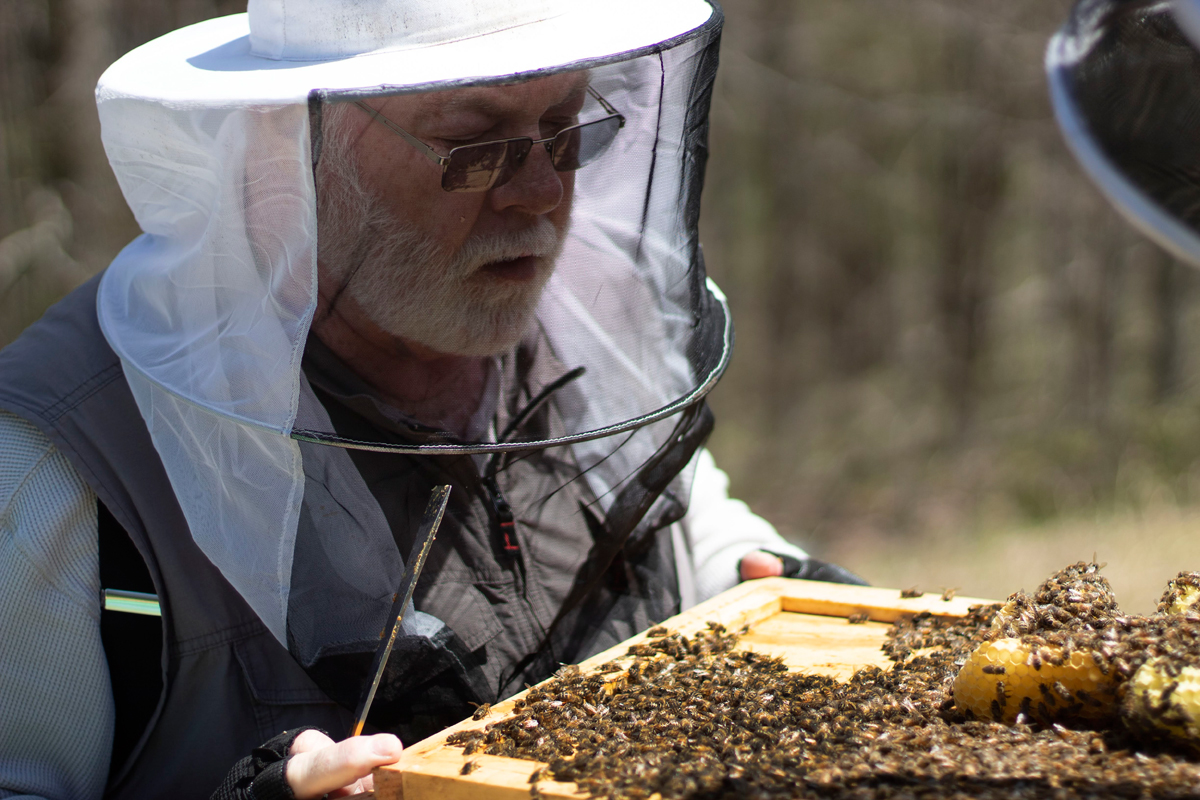 Mark Lilly can tell someone loves beekeeping when they find it relaxing to be completely surrounded by bees. “When you watch them struggle to put into words how they can lose hours at a time in their hives, that’s when you know they’ve got it,” he said.

Lilly is an apiary manager for the Appalachian Beekeeping Collective, which teaches people in rural West Virginia how to keep bees for profit. The Collective provides its graduates with free bees, hives, and routine mentoring, collects and bottles their honey, and sells it for them at $25 a jar. Now in its second year, the Collective includes 34 beekeepers.

Coal mining employment has dropped almost 40 percent since 2009 and West Virginia now has the lowest labor force participation in the nation. In Summers County, where the Collective is based, 28 percent of people are living in poverty.

Although the area relied on the quickly fading mining industry, Lilly and the Collective believe that West Virginia, and all of Appalachia, now has a chance to return to another heritage: beekeeping.

Terri Giles, a native Appalachian and the vice president of government relations for the Collective, says the landscape lends itself to beekeeping for several reasons.

“Sometimes people look at West Virginia and say, ‘Oh, those seams of coal!’ And that’s true; there are seams of coal—and they’ve tapped a lot of them out. But [with] the mountains, the trees, the forests, and the flowers, we have a seam of gold in West Virginia that honey bees can turn into honey and that we can sell,” Giles said.

Giles wants fellow Appalachians, like Lilly, to run the Collective because it’s an opportunity for people who live in and know the community to help rebuild it in a way that works best for them. 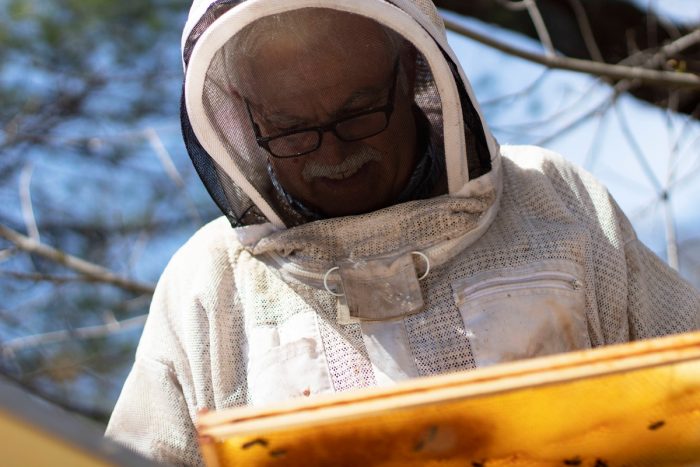 Lilly grew up watching his grandfather keep bees on his small farm. Beehives, he said, were often a staple on farms and in the fields and woods behind coal company housing. The geology of West Virginia does not lend to big agricultural communities, so people grew enough food to feed their families, and the bees provided their sweetener. “I think the people of this area, like a lot of rural areas, learn how to get by—period,” says Lilly.

A number of families have been in the area for generations and still have a close connection to the land, and Lilly said he’d like to see that heritage preserved for those that want to stay. 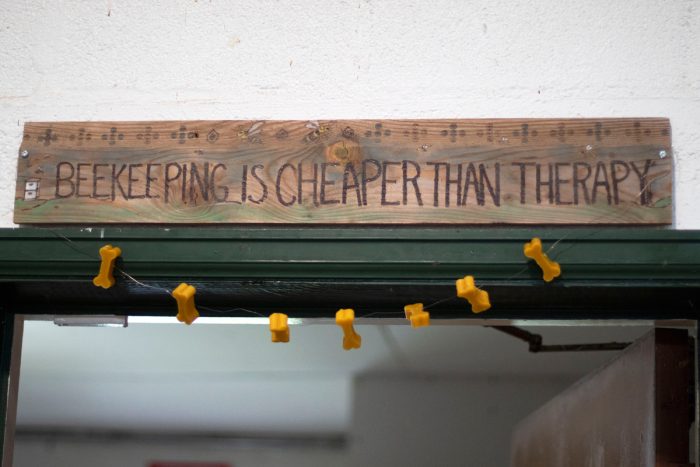 Always fascinated by honey bees, Lilly started a few colonies behind his house as a hobby 25 years ago. He says his job as an insurance adjuster offered good living, but it became just that—a job. His beehives were where he went to relax. He always dreamed bees would eventually be his full-time retirement gig, so when he read about an opportunity to work for the Appalachian Beekeeping Collective, he jumped at the chance to follow his passion. 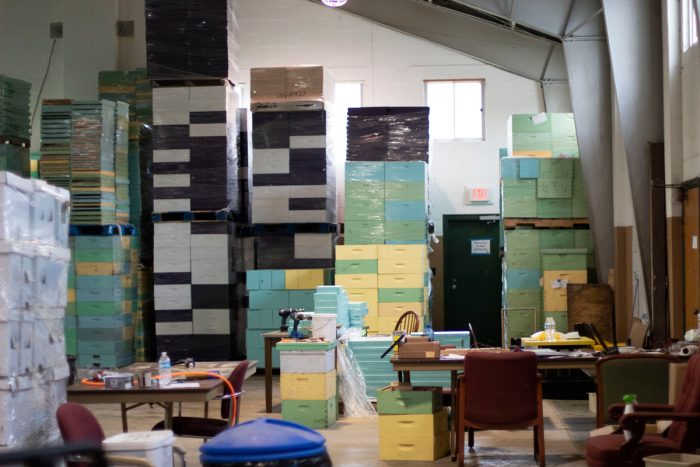 Part of the non-profit Appalachian Headwaters, the Appalachian Beekeeping Collective started in 2017 as an effort to provide and support the pollinators needed to help the nonprofit’s mined land restoration projects—re-establishing forests and water quality on former mountaintop removal and surface mine sites and growing native plants—succeed and evolved into a workforce development program. Lilly was one of the first employees of the Collective, helping to construct the hives, acquire the bees, and set up colonies. As a certified master beekeeper, Lilly now also helps with free beekeeping classes the Collective provides. Demand for those classes is high, and as the number of graduates grows, the distinctly-colored hives pile high inside and outside the warehouse of the Collective’s headquarters. 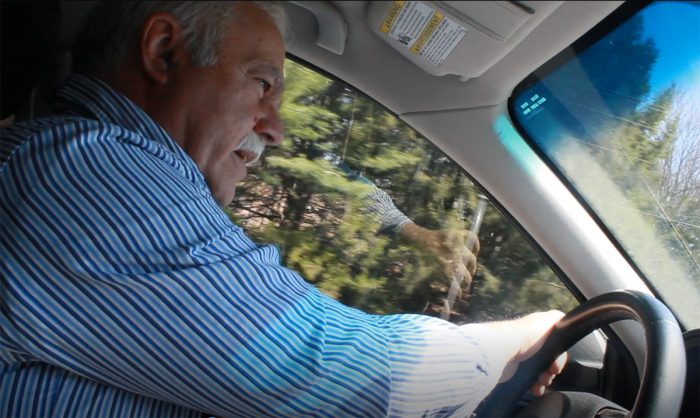 Lilly has lived in Raleigh County in southern West Virginia, his entire life. For 30 years he worked in the same communities the Collective is working in now. “I had watched those communities slowly die as the economy began to downturn. You’d see businesses closing, people losing their jobs; you could just see the energy leave the communities.”

Now, Lilly works to offer residents “a little bit of hope” by driving the narrow winding roads to mentor beekeepers. His mentorship ensures beekeepers are supported beyond the Collective’s classes, helping them reach a consistent supplementary income faster. There are four mentors in the Collective, and each has a different set of approximately eight (and growing) beekeepers they check in with regularly. They’re not far apart, but the nature of the roads make for, “a lot of windshield time” according to Lilly, who said he can spend eight to nine hours a day in the car averaging 25-30 miles per hour. 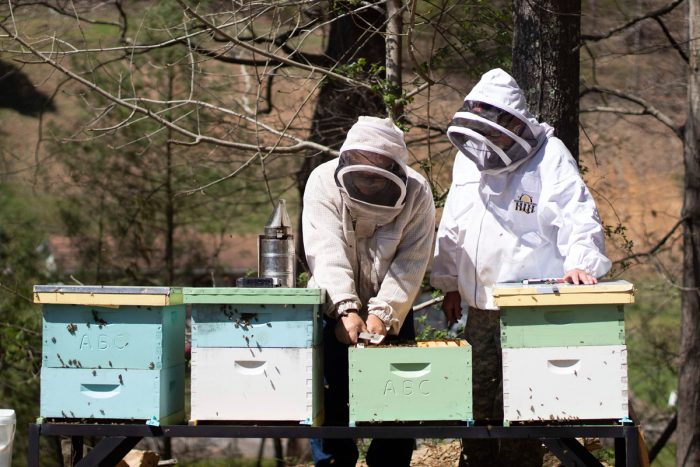 At each beekeeper’s colony, Lilly walks through each individual hive with them. He checks on the health of the bees, watches for overcrowding, and answers their questions. On this day, Billy McNeal said he collected his fifth bee sting of the season. He said he’s gotten used to the bee stings and has even witnessed their benefit—he was stung on a knuckle he broke several years ago and afterwards could move it when he wasn’t able to before.

“The assistance and mentorship we get helps us learn and succeed faster than we could otherwise,” says Billy McNeal, who works at Krogers and is a beekeeper in the Collective. He says keeping bees has also helped him recognize the importance of pollinators’ role in the environment.

“We’re educating our beekeepers, and the next generation, how to take care of everything that’s here so it can continue to be used in the future,” Lilly said. He says one of the main goals of the Collective is to help prevent more people from having to move out of the area, particularly young families. “Hopefully if a young family is struggling with the choice to have to relocate, we can help them generate another $3,000 to $4,000 a year that keeps them in the area.” 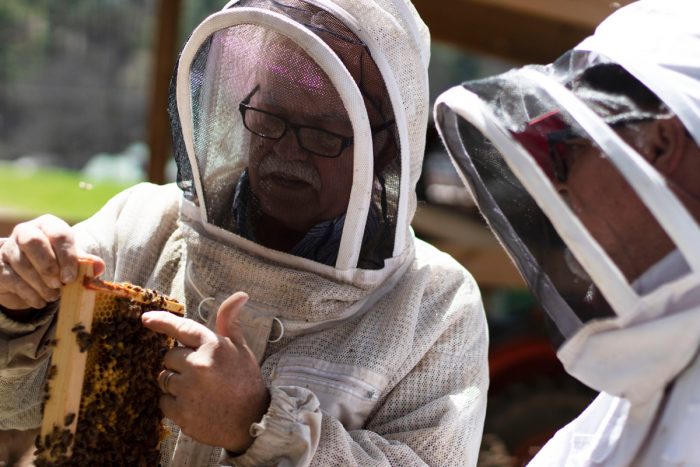 The Collective is hoping to create an industry where people are mindful of how the environment affects honey bees. “I’ve been around long enough that I can say, ‘Look, the climate has changed and that has an impact on the bees and the environment around us,’” Lilly said. For example, Lilly says warmer days in the winter months can trick bees into venturing out of the hive too early when there is nothing for them to forage and not enough winter reserves to refuel them after the journey.

Lilly wants beekeepers to recognize what steps they can take to help cultivate an environment that is healthy for their bees and consequently have positive impacts on preserving the area’s natural resources. The Collective teaches its members how to keep bees naturally, without using any chemicals, and educates them on the dangers of pesticides. 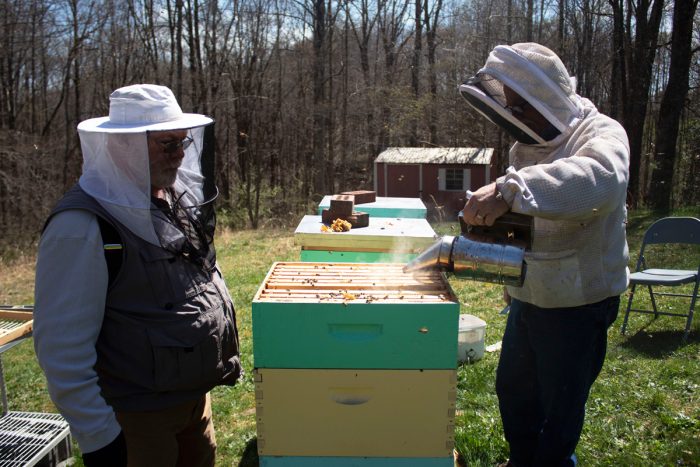 Veteran Mike Davis (left) is a member of the Collective and has several hives in his backyard. He shares his love of beekeeping with his grandchildren, who he wants to be able to enjoy the “beauty of watching God’s creation at work.” 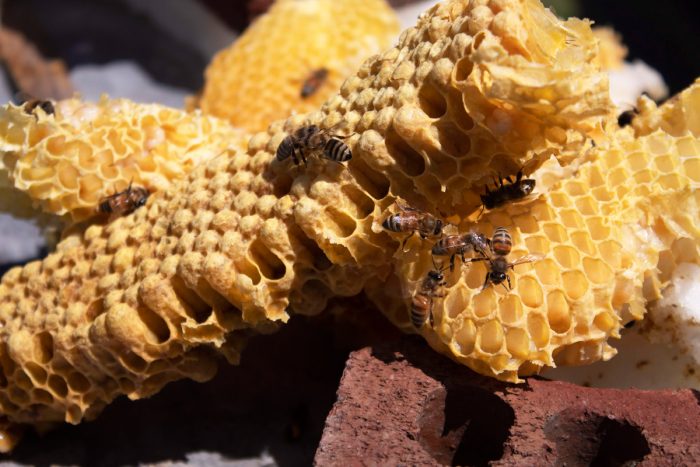 The collective also hopes to teach its beekeepers how to use their hives as a means of rebuilding their livelihoods in a struggling economy. Some beekeepers have started their own ventures selling products including beeswax candles and honey-roasted coffee. 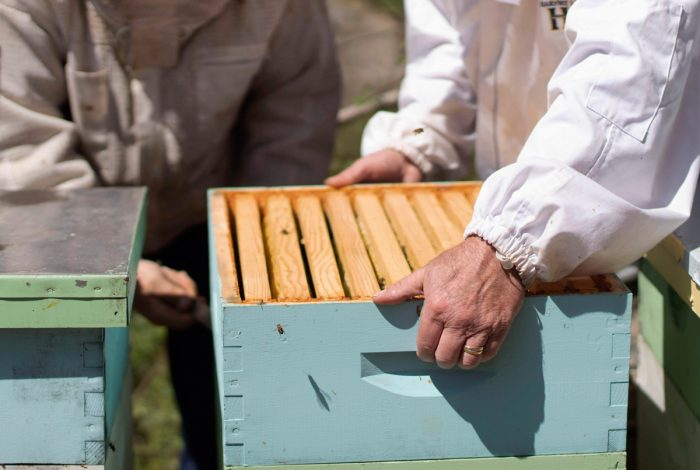 When a hive is too full of bees, Lilly helps beekeepers add another box on top called a “super,” which gives the colony more space and prevents swarming. Since 2017, the overall number of bees in the region has grown, as has the Collective. To help build the industry, a new crop of students will join the collective this coming winter, more than doubling its size. 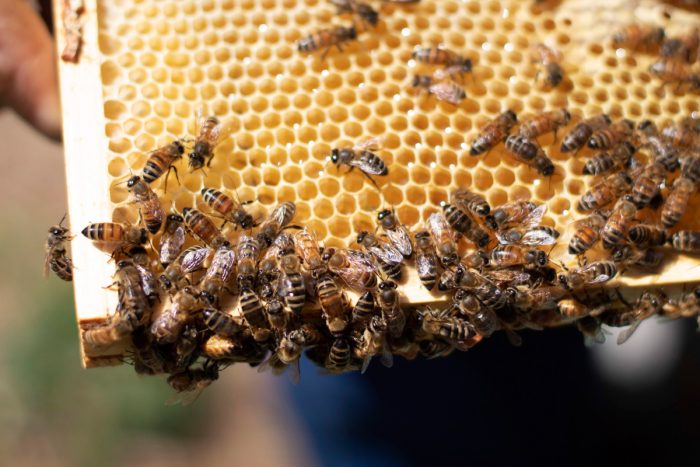 This is the first summer the Collective harvested and sold honey for its beekeepers, shipping jars to cities including Washington, New York, Los Angeles, and San Francisco. So far, Lilly reports they have collected more than three tons of honey. It has been a success, but for Lilly, there is still plenty of room to grow. Lilly says he hopes the work the Collective’s beekeepers have put in to build themselves up and regain a connection to the land will change the way others see rural West Virginians.

“I think they need to see a proud people. Not looking for sympathy, not looking for anything free, just looking for opportunities. They’re simply looking for somebody to say: Here’s a way to help yourself and keep your family in the area.”

Brennan Hafner is a multimedia journalist based in Maryland. Read more >