A lawsuit alleges that most of the Oregon company's milk comes from a mega-dairy, while Tillamook argues that its focus is on being farmer-owned and treating animals humanely. 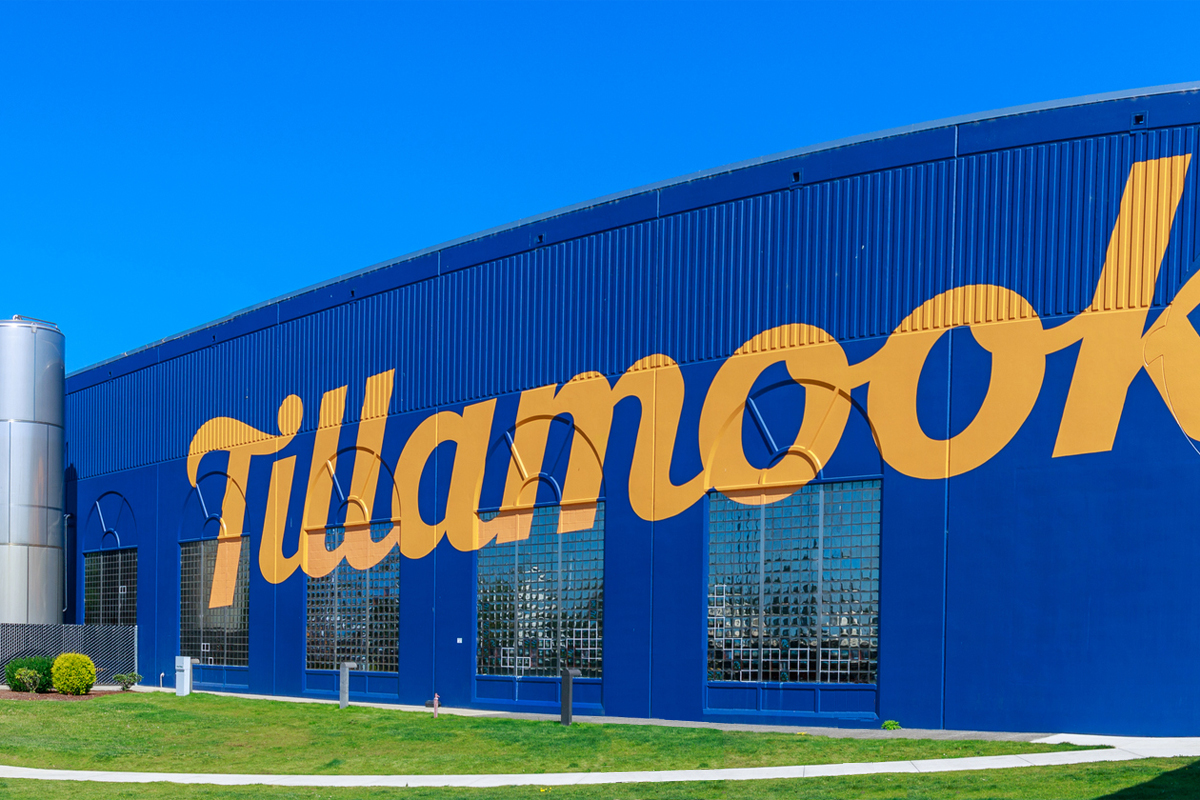 A strong bovine bouquet drifting in on ocean breezes doesn’t keep people away from the agricultural town of Tillamook, Oregon. For decades, cows—or, more specifically, the Tillamook County Creamery Association—have drawn hundreds of thousands of tourists here every year.

The Creamery, as the popular visitor’s center is known, welcomes people into a world of dairy. Guests can watch factory workers processing bricks of cheddar and learn about curds and whey from displays lining the observation room. Kids can rig milking equipment to porcelain udders. Informational kiosks introduce some of the nearby family farmers whose herds contribute to both the local aroma and raw ingredient for Tillamook’s goods.

But in reality, the majority of milk used in Tillamook’s cheeses, ice creams, and other products comes from the Columbia River Dairy in eastern Oregon, owned by Threemile Canyon Farms, the state’s largest dairy farm. This fact is the foundation of a class action lawsuit filed in August by the Animal Legal Defense Fund (ALDF).

“They tout themselves as this alternative to mass produced fare and they are mass produced fare,” said ALDF staff lawyer Amanda Howell. “They’re really using the small farmer to hide what’s actually going on behind the scenes.”

The 110-year-old Tillamook is a popular regional brand that has been expanding its market penetration east of the Rockies. The company talks up its farmer-owned cooperative model, the high quality of the milk it uses and the fair price it pays for it, and the quality of animal treatment it expects from suppliers. Its website is a visual feast of farm families and cows in sunny, grassy fields, and includes an interactive map of local milk providers that does not extend beyond the county.

The lawsuit claims that Tillamook misrepresents the source and manner of production of its milk. It further claims that the company misleads consumers about the geographic location of their milk source. 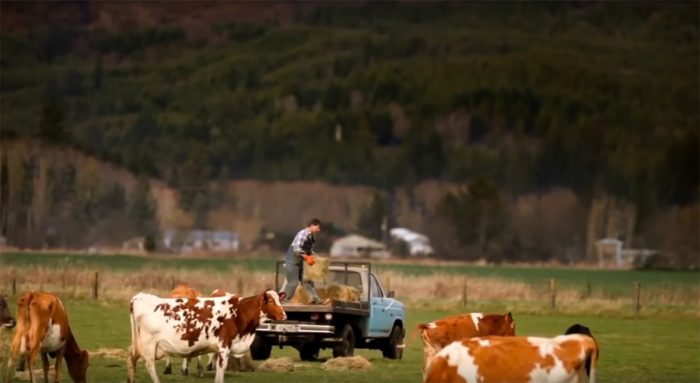 A still from one of Tillamook’s “Dairy Done Right” ads.

Tillamook has not responded in court, but in a statement said that the company “adamantly disagrees with the allegations made in the lawsuit and we will aggressively defend ourselves.” A Tillamook representative declined to answer questions from Civil Eats about efforts toward transparency or branding, citing the lawsuit. The Oregon Dairy Farmers Association also declined to comment for this article.

This is not the first time that ALDF has sued a food producer for deceptive branding. And, as recently reported in the National Law Review, there are three similar cases filed by other organizations against different companies pending in other states. Win or lose, these lawsuits are drawing attention to the disconnect between marketing claims and the hidden reality of how food is produced in America, particularly when it comes to consumer demand for humanely produced animal products.

“People tend to think that the smaller production facilities are treating animals better,” said ALDF’s Howell. “At least they have access to pasture, at least they’re getting individualized care. And people attempting to vote with their dollars are being duped by Tillamook.”

Threemile Canyon is well beyond the Tillamook County line, east of the Cascade Mountains in Boardman, Oregon. The company’s size defies popular notions of family farming; its website claims that the farm holds 93,000 acres of cattle, crops, and conservation land. The farm includes three conventional dairies, one organic, and a herd of calves and replacement heifers. At least 25,000 dairy cows are purported to produce 1.4 million pounds of milk every day.

In the filing, ALDF describes Threemile Canyon’s dairy operations as a “complex of cement-floored production facilities and barren dirt feedlots, where cows are continuously confined, milked by robotic carousels, and afflicted with painful udder infections.”

Neither Threemile Canyon nor its subsidiary Columbia River Dairy are part of the Tillamook lawsuit. 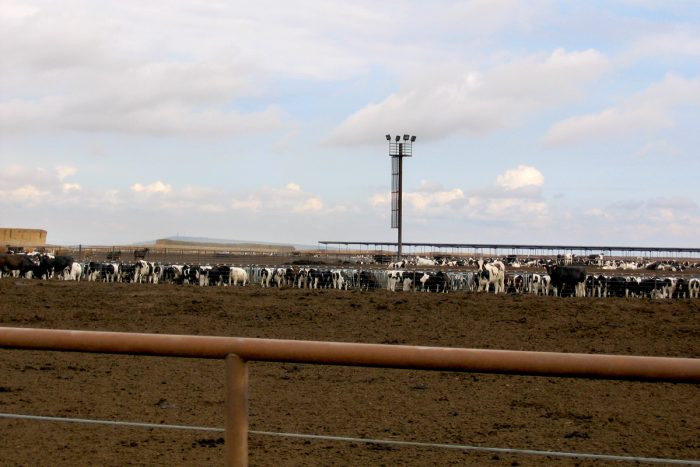 Cattle in drylot at Threemile Canyon Farms in Oregon. Photo CC-licensed by Friends of Family Farmers.

The lawsuit has received support from a number of environmental and family farm advocacy groups. A statement signed by the Center for Food Safety, Friends of Family Farmers, Food and Water Watch, and four other organizations reads, “Tillamook’s increasing reliance on industrial mega-dairies to ramp up production further contributes to overproduction, which lowers prices for family farmers and contributes to Oregon’s devastating decline in family farms.”

The complaint seeks to compel Tillamook to cease its marketing representations. After the compulsory 30-day waiting period, ALDF plans an amendment adding damages of $200 for every Oregonian who has purchased Tillamook products during the calendar year before the filing date.

Tillamook doesn’t hide its 20-year relationship with Threemile Canyon, and trumpets their sizable herd and environmental stewardship on its website. The company’s FAQs also divulge the fact that not all of its sourcing and processing takes place in Tillamook County.

ALDF says that there’s a difference between the disclosure of facts and actively projecting a contrary reality.

“The law is very clear, consumers are not required to spend hours doing online research in order to correct deception that is being put forth by a marketer’s pervasive marketing campaign, ” said Kelsey Eberly, a lawyer with ALDF.

The case has been put together over the past year, including online surveys conducted by a third party. The surveys have not been made available to the press due to the pending litigation, but are referenced in the legal filing. Its results back up claims that consumers overwhelmingly believe that Tillamook gets all its milk from small-scale family farms.

The filing summarizes the consumer experiences of four named plaintiffs. According to the filing, in each case, the plaintiff “thought that she was purchasing a product that aligned with her values. Three of the four also name other brands they similarly shop for at greater expense because of their business practices.” None of the four plaintiffs were available for comment and none have issued statements regarding the lawsuit. 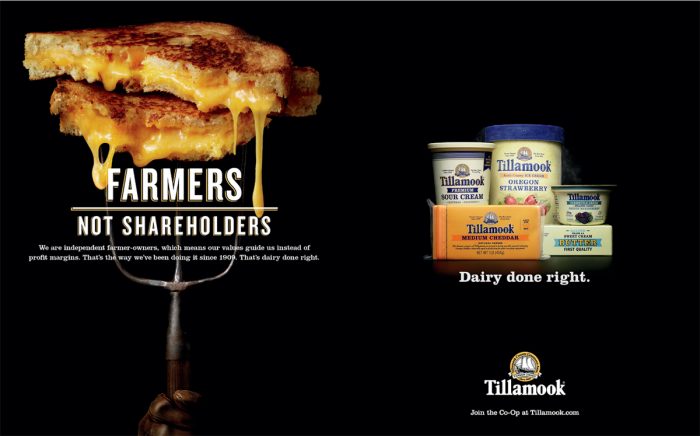 “That Tillamook sources milk from Threemile Canyon Farms and other large dairies outside Tillamook County has never been a secret. It has been reported widely for nearly 20 years, not only in the Capital Press but in other statewide media…” reads a recent editorial from the Salem, Oregon-based Capital Press critical of the ALDF lawsuit. The piece goes on to point out that many small family-run dairies use the same production practices that Threemile Canyon does.

“We’re not sure what ‘traditional farming methods’ consumers imagine are utilized by co-op members who have appeared in Tillamook advertising. With the exception of scale, many of their methods are similar to those employed at Threemile Canyon. Milking carousels—robotic or otherwise—are common on the dairies of farmer-owners in Tillamook County. No commercial-scale dairy milks by hand,” it reads.

While ALDF presents its legal action as one of consumer protection, Tillamook’s statement refers to ALDF as “anti-dairy.” ALDF typically files legal complaints specific to animal welfare, rather than false advertising. Among its other recent legal targets are a California restaurant selling foie gras illegally, illegal slaughterhouses in Florida, and an ag-gag law in Arkansas. The Tillamook complaint, which prefers persuasive rhetoric over dense legalese, never misses an opportunity to refer to Threemile Canyon as a “factory farm,” one that “confines tens of thousands of cows and concrete in the desert of eastern Oregon.”

Eberly admits that consumer protection claims provide an avenue for championing animal welfare issues where there are few other legal paths forward.

“Legislators have purposely made it very difficult to address the harms that industrial agriculture causes, so we have to use a variety of methods like consumer protection law to make up for some of that ‘ Get out of jail’ card,” she says.

This isn’t the first time ALDF has sued companies for what it claims is deceptive practices. In March of 2018, ALDF reports that it sued Trader Joe’s in California for selling “Cage-Free Eggs” in boxes decorated with illustrations of chickens on grass when, in fact, the chickens laying those eggs were kept indoors. Three months later, ALDF announced that the grocery chain agreed to change their packaging.

In June of 2016, the group joined a lawsuit filed in Washington, D.C. against Hormel Foods, alleging that the name of the company’s Natural Choice lunch meat constitutes false advertising. The court issued a summary judgment in favor of Hormel in April 2019, in part because the claims were “pre-empted by federal meat and poultry labeling law.” But during litigation, Hormel was forced to disclose the use of antibiotics on their pig farms and the fact that Spam and Natural Choice are both made from the same pigs. ALDF plans to appeal the court’s decision.

“Hormel, in defending the lawsuit, put into the public record information about its practices and that information showed that its marketing claims were false and misleading,” said Eberly. “We want the public to know that.”

According to Eberly, the Tillamook case more closely aligns with the lawsuit against Hormel, but the group doesn’t expect the same issues of standing and preemption to come up in Oregon. She also recently released a webinar called “False Advertising: How to Protect Animals by Litigating for Consumers 2019.”

Tillamook has 30 days from the initial filing to ask the court to dismiss the case or begin mounting their defense. Whatever the legal outcome, ALDF has made the ties between Tillamook and Threemile Canyon much more visible—which may have been its goal all along.

Brendan Seibel is a Portland-based freelance journalist whose work has appeared in Wired, Medium, Motherboard, and elsewhere. Read more >