Jim Riddle and Joyce Ford, founders of the International Organic Inspectors Association and long-time organic inspectors and teachers, live out their values at Blue Fruit Farm. 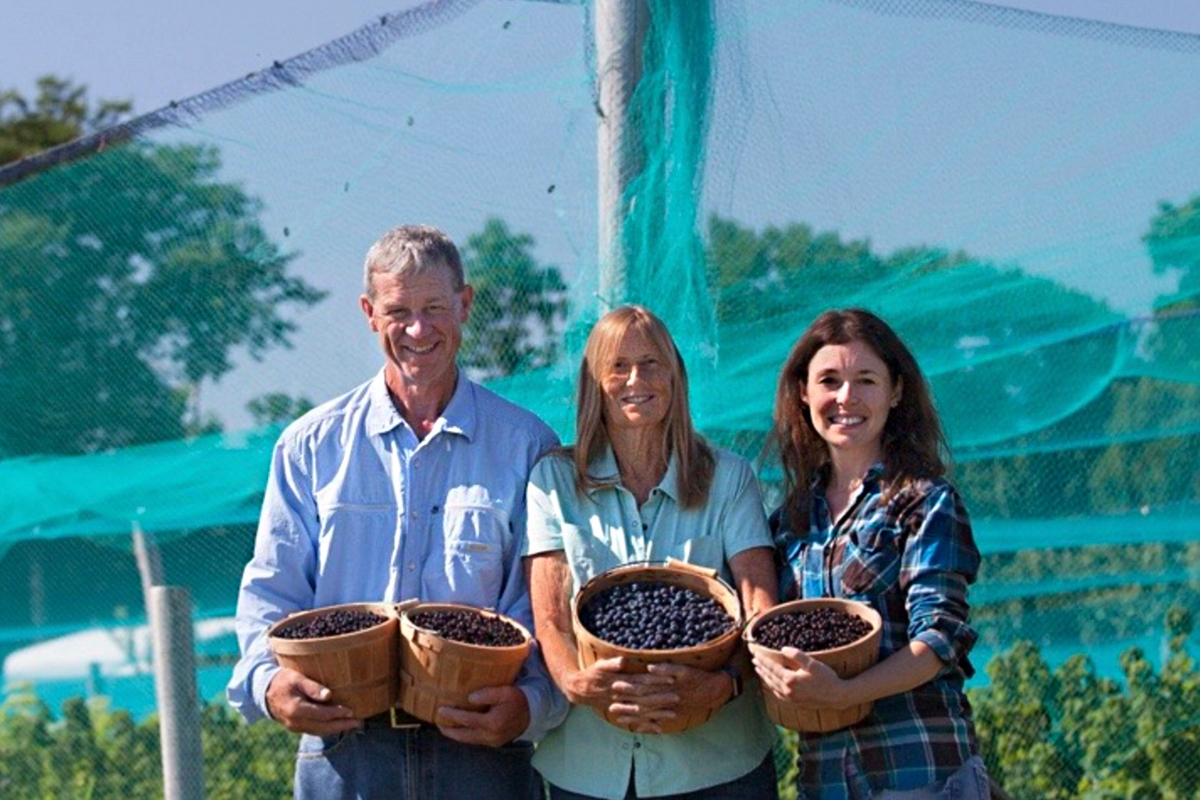 Jim Riddle and Joyce Ford, the managing owners of Blue Fruit Farm in southeastern Minnesota, have lived and worked on the same property for nearly four decades. And yet, that seems hardly enough time to contain all the couple has achieved—and their modest home, which only recently went on-grid, seems too unassuming to serve as a launch pad for the instrumental roles the two played in helping to define organic standards, policy, education, and practice around the world today.

The couple’s reach spans from launching a thriving organic farmers’ market to teaching organic certification and training certifiers in a dozen countries including Japan, Russia, Jamaica, and Iran. In recognition of their varied and impressive work, they earned the 2019 Farmers of the Year award from Midwest Organic and Sustainable Education Service (MOSES).

“This award is an opportunity for the organic community to recognize farmers who exemplify the best in organic agriculture: outstanding land stewardship, support of biodiversity and innovation on their farm, and a willingness to share everything that they’ve learned with other farmers,” explains Lauren Langworthy, interim executive director at MOSES. “They’ve helped grow the knowledge of so many farmers working in this sphere and championed many issues to positively impact organic family farms.”

Riddle and Ford’s farm is on a five-acre parcel of a cooperatively owned 360-acre property that lies just west of the Mississippi River in the verdant hills of the Driftless Region. Organic since 1975, the perennial fruit farm bears blueberries, elderberries, cherry plums, black currants, aronia berries, honeyberries, juneberries, and plums—all grown through practices that prioritize soil health.

“A philosophy of ours is, ‘We grow health,’” says Riddle. “I mean that with the type of foods we grow, but also that we keep the land healthy. We protect water quality, we’re enhancing biological diversity, [and] we’re helping create healthy, vibrant living soils.”

Riddle grew up in Iowa, where he enjoyed a large family garden. His mother, the lead gardener, never sprayed chemicals and always followed the advice from her mail-order organic gardening magazines. Ford grew up in Florida away from farming; her awakening came in college when she discovered the back-to-the-land movement. In pursuit of property to farm on, she landed in southeast Minnesota, where she met Riddle.

The two were married at Wiscoy Valley Community Land Cooperative, where they’ve been residents and members for nearly 40 years. The cooperative started with just a handful of people a few years before Riddle and Ford arrived in the area. Today, it consists of 20 adults and their families. The group reaches decisions about the land through consensus, but individuals and families independently manage household decisions. The group holds weekly meetings, because as Riddle says, consensus requires a lot of communication. 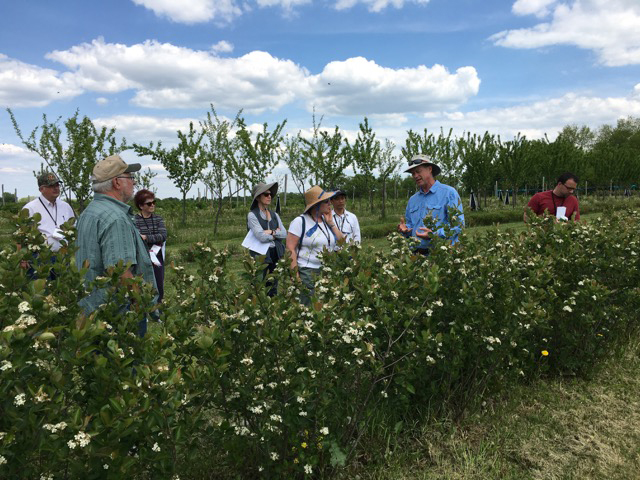 The couple first farmed annual crops here under the name Wiscoy Organic Produce. In the mid-80’s, they worked together with other local farmers to start the Winona farmers’ market. From the start, the market required vendors to grow or make their products within a 50-mile radius of Winona. It was slow going at first, but the couple cheerfully reports that the market is now the place to be on Saturdays in Winona.

By the ’90s, Riddle and Ford were struck by the lack of national oversight and standardization when it came to organic practices. In response, they formed the International Organic Inspectors Association (IOIA), which they led through its first eight years from the comforts of their own home. During this time, they moved away from farming to focus on their work in organic inspection and inspection training.

“We had entered a wide-open niche where no one else was doing this work and there was a huge need,” Riddle says. “We just kept getting requests from all over the world.”

In 1997, Riddle helped to revise the U.S. Department of Agriculture (USDA)’s first proposed National Organics Standards, which are still in use today. In 1998, he played a central role in getting the state of Minnesota to adopt an organic certification cost-share program to lower the cost of certification. In 2002, the program was nationally adopted with its inclusion in the farm bill.

Ford was also the first organic inspector to work with organic farms in the paths of oil pipeline development, helping to define policies designed to protect the organic integrity of farms facing those circumstance.

Riddle sees real organic farming practices as vital to protecting water quality, sequestering carbon in the soil, enhancing biological and genetic diversity, and protecting animal health and welfare, and he is concerned by the USDA’s oversight of the label. Currently, the agency is allowing huge dairy and poultry factory farms to be certified organic as well as hydroponic operations that grow plants in containers of nutrient solutions rather than soil, he says, and they are not stopping imported conventional grains from being sold under the organic label.

“These actions by USDA undermine the integrity of, and consumer confidence in, the organic label, at a time when we need to greatly expand the use of real organic practices to protect human and planetary health,” he says.

He hopes that in its next Farm Bill, the U.S. will invest in real organic production systems by creating a national organic transition support program that offers financial and technical assistance to help farmers, including new, beginning, and socially disadvantaged farmers, convert to organic production.

And, he sees hope for the organic movement in young people: “I am heartened when we host young children at our farm and we help open their minds to the values of connecting with nature and eating healthy foods” he says. “I am also heartened by the number of young people who are interested in producing food in harmony with the earth… by the growth of farmers markets in small towns and big cities, [and]… by the work of the Real Organic Project, the Organic Farmers Association, and the National Organic Coalition, to protect organic integrity.”

A Focus on Fruit

In 2009, the pair found themselves in a position to apply what they learned from farmers around the world when a five-acre, deer-fenced portion of their communal property became available to farm. “After considering what else was being grown locally and climate change issues, I said—let’s grow blueberries,” Ford says. 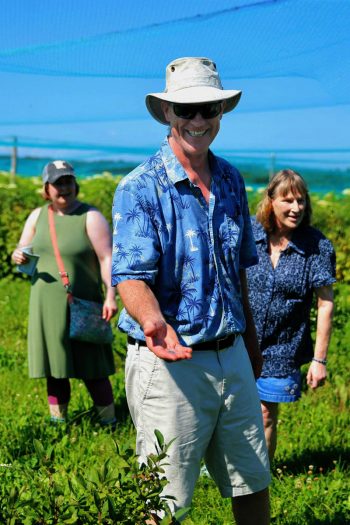 Jim Riddle offers information and blueberries during a tour of Blue Fruit Farm. (Photo by Craig Johnson, courtesy of the Winona Daily News)

Riddle’s initial response was that blueberries prefer more acidic soils. To solve the soil problem, the pair thought organically. They began planting with a combination of peat moss and high-quality compost topped with elemental sulfur, both of which work to acidify the soils. “You continually do that, but you adjust how much you need based on your soil test results,” Riddle says.

They decided to grow blueberries alongside other berries that are adapted to their soil type. In 2010, they started their three-year planting plan and now grow blueberries, aronia berries, honeyberries, juneberries, elderberries, and plums.

With organic farming, Ford explains, “You have to be a problem solver. There are always solutions to problems.”

Riddle quickly let go of his early resistance to blueberries: “I like to say that blueberries are hard to grow, but they sell themselves. These other things are easy to grow, but we have to sell them,” he says. “The fruits we grow are fairly unusual; we’re still introducing people to them. We’re actually building community around these unusual fruits.”

In addition to cultivating native prairie directly adjacent to their fruit, Ford and Riddle grow plants like hyssop and clover between plum trees to provide pollinator food and habitat. “We’ve got something blooming here until frost,” says Riddle.

Prairie Moon Nursery also calls the Wiscoy Cooperative property home. They currently manage 40 acres of restored prairie within the community, directly adjacent to the farm. The prairie provides pollinator habitat and a natural extension to the farm’s healthy soils and clean water. In the fall, the farmers earn extra income harvesting native seeds for the nursery.

“Diversity is key to being successful,” Ford says.

As a property that’s been farmed organically for nearly 50 years, the farm has enjoyed a long reprieve from synthetic fertilizer or pesticide applications, and perennial production allows the soil to build complex bacterial and fungal structures that bolster disease and pest resistance. In contrast, the farmers say, conventional agriculture that relies on tilling degrades soil communities, is energy intensive, and reduces soil’s capacity to absorb water.

Riddle points out a cistern that collects rain from the barn roof and provides enough water to irrigate their five acres. The blueberries require the most irrigation; the other plants often require none at all. The ability of locally-adapted perennials to source their own water underscores reasoning behind the couple’s choice of crops in the face of climate change. The diversity in the fruiting rotation also allows for resilience. If one crop gets hit hard by a weather event, another that fruits earlier or later is likely to avoid the brunt of the blow and can compensate for losses elsewhere.

Despite these farming practices, a few pests persist. To dissuade fruit-eating birds (most notably cedar waxwings), the farmers discovered early that they needed to cover their acreage with netting. They also operate a sound system intended to scare off birds. In addition, they employ a deer fence surrounded by an electric raccoon fence. 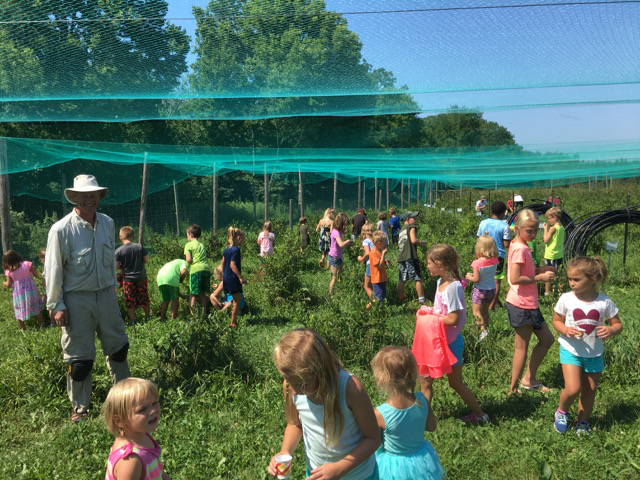 Both farmers strongly endorse talking to neighbors to share knowledge, talking to other farmers and experts, and familiarizing yourself with the research that’s already out there. When a family of badgers took up residence in the barn, for example, they invited “Ranger Ed” from the Fish and Wildlife Service over to have a look. He suggested they try a radio. Once Riddle and Ford began playing NPR, the badgers left and haven’t been back.

Ford emphasizes that the best pest management practices come from knowing as much as you can about all the stages of a pest’s lifecycle and interrupting those stages in as many places as possible.

Preparing for a Transition

The couple is currently in the process of readying themselves and their community for a big change. They have plans to spend more time with their daughters’ growing families in Minneapolis and New Hampshire, and will soon be passing Blue Fruit Farm into the hands of Katie Lange, a Winona native who has worked on the farm for the past two years. Lange, whose commitment to her work reflects her investment in the farm’s philosophy and practice, is eager to take on the challenge.

While Riddle is wistful about the change, the community that they’ve helped nurture sees it as a continuation of their work.

In this effort, as with the rest, says Lauren Langworthy of MOSES, “Jim and Joyce have created a welcoming environment for making the dreams of sustainable farming futures a reality.”

This article was updated to include Jim Riddle’s thoughts on the current and future states of the organic movement and organic standards.