Unharvested crops dramatically bump up estimates of U.S. food waste. But some farmers—who get demonized for working within a system they didn’t create—are seeking solutions to get that food to market. 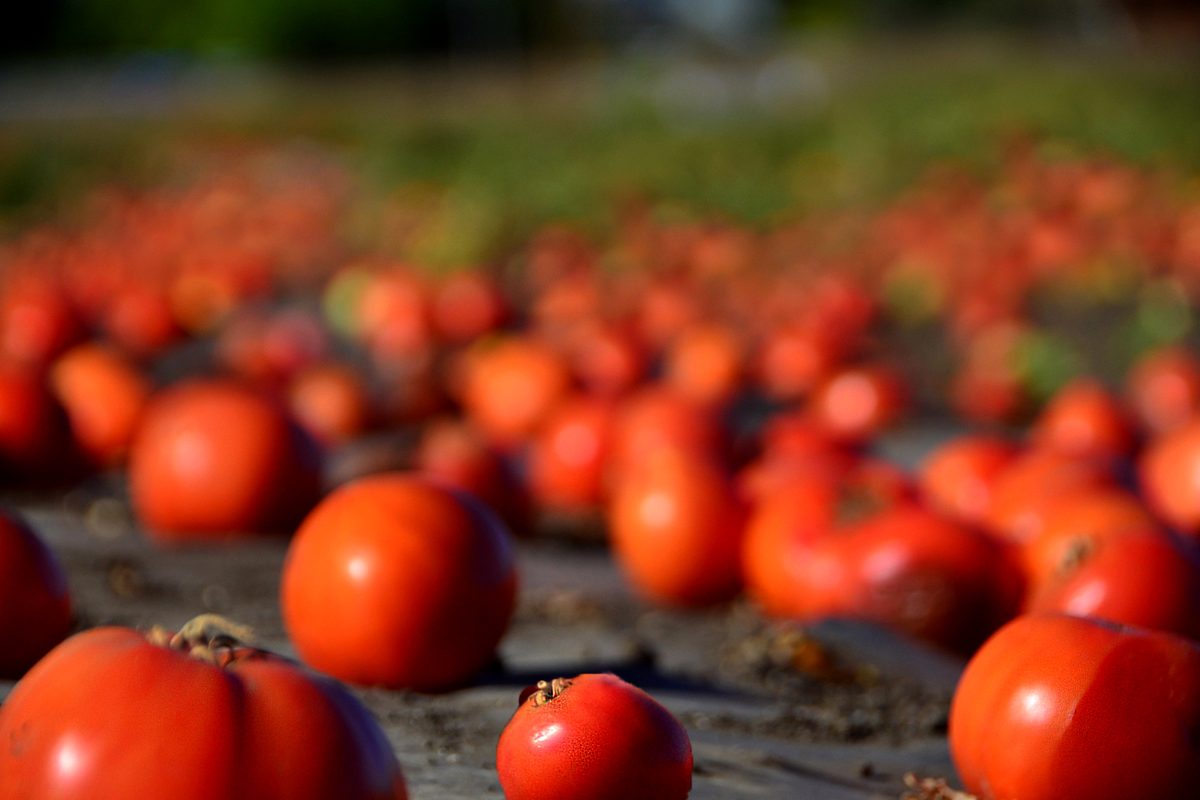 Last year, Cannon Michael left over 100 acres of ripe cantaloupes unharvested. The sixth generation grower could not justify paying workers to pick them all because the cost of labor, packing, and, shipping would have been more than the price he could get for the fruit.

And so, he left about 30 percent of his perfectly edible cantaloupes to decompose and get churned back into the ground.

“It was very frustrating to grow a high-quality product and have to leave it in the fields,” said Michael, the president/CEO of Bowles Farming Company, which grows 300 to 400 acres of cantaloupes in Los Banos, California, every season, in addition to hundreds of acres of watermelon, tomatoes, and cotton. “If the pricing drops,” due to oversupply or other reasons, said Michael, “there’s a certain economic threshold that just doesn’t justify harvesting the crop.”

Michael’s experience, it turns out, is fairly typical. According to a new ground-breaking study about on-farm food loss from Santa Clara University, a whopping one third of edible produce—or 33.7 percent—remains unharvested in the fields and gets disked under. This is a much larger percentage than previously reported—and it may end up dramatically increasing the current estimate of overall food waste in the U.S.—which until now has been long tallied at 40 percent.

Most research on food loss and food waste has focused on post-harvest, retail, and consumer levels. The new study offers a far more accurate look at on-farm food loss by relying on in-field measurements. Most other studies have used less reliable grower surveys to estimate produce left in fields and put the percent of on-farm loss closer to 20 percent.

“We’re very excited for this data to come out,” Greg Baker, the study’s author and executive director of the Center for Food Innovation and Entrepreneurship at Santa Clara University, told Civil Eats. “There is a lack of awareness by consumers about how large of a problem this is at the farm level.” He added that the study corroborated the scenarios that he and his colleagues had been observing the fields for a while.

“This study should serve as a wake-up call,” said Dana Gunders, a food waste expert and advisor, formerly at the Natural Resources Defense Council and behind its seminal 2012 food waste report, Wasted. “It provides a map in terms of where we should look for opportunities to minimize food loss, and it helps us understand that it’s not as easy as farmers leaving food in the fields and we should just go get it.”

The Scale of the Problem

At the same time, food waste is a major source of greenhouse gas emissions, contributing 8 percent of total global emissions and at least 2.6 percent of all U.S. emissions. If food waste were a country, it would be the third-largest emitting country in the world, after China and the U.S.

Ironically, the earlier the food loss occurs in the chain of production, sale, and consumption, the better, experts say. While no farmer likes plowing perfectly good melons, artichokes, or lettuce back into the earth, the decomposing produce provides nutrients for next season’s crop. But once produce is harvested, packed, and sent to a warehouse, and there’s no market for it, it often heads to the landfill, where it releases greenhouse gases.

Still, even when the loss occurs at the field level, it still requires plenty of water, land, fertilizer, pesticides in many cases, and agricultural labor. ReFED, a coalition of nonprofits, businesses, and government agencies that fight food loss and food waste, estimates that 21 percent of water, 18 percent of cropland, and 19 percent of fertilizer in the U.S. are dedicated to food that is never eaten.

Farmers Trapped in a Broken System

The new study measured the loss of 20 hand-harvested crops in 123 fields on mid- to large-size conventional California farms. It found that food loss varied depending on the crop, and even on the variety of produce. (Produce that was damaged by disease, rot, pests, or machinery was not included in the measurements.)

Partial harvests were typical, the study found. The lowest losses were for tomatoes, sweet corn, and artichokes, though a significant amount of produce was still left in the fields. Some of the highest losses were for watermelon at 57 percent, cabbage at 52 percent, strawberries at 44 percent, and kale at 39 percent. By far the highest waste, at 113 percent (meaning more is lost than sold), occurred with romaine hearts, where all of the outer leaves were left in the fields.

“Anyone who has watched a romaine hearts harvest has had their heart broken,” said Gunders, who was not involved with the study.

The study also points out that growers often have little control over how much produce is lost. Unlike with retail and consumer-level food loss, farm-level loss is the product of a complex mix of forces that include field stability (how quickly a crop matures and how long it can stay in the field before going bad), weather, pests and plant diseases, labor availability, market prices, and buyer specifications for how produce should look and feel like.

Farmers grow mostly under contract with wholesalers and retailers and have to deliver what those contracts specify. Most plant 25-30 percent more than the contract specifies because of all the variables listed above. But it can also lead to a lot of excess produce.

“People say all this food is rotting in the fields, why don’t the farmers make it available? Farmers have been demonized. They didn’t design the system and they are not the villains,” said Greg Baker. Due to liability issues and food safety rules, most farmers don’t let the public come to harvest crops in the fields. A few organizations, such as Farm to Pantry, do organize teams of volunteers to glean produce on farms after the harvest, but the numbers of farmers who participate are small and volunteers can be hard to find.

According to Baker, growers who participated in the study were surprised to learn just how much food was being left behind. Along with measuring the amount of unharvested edible food—collected directly behind harvest crews—the study also surveyed growers about how much they thought was being lost. In the end, the measured loss was on average 2.5 times more than what the growers had estimated.

Harvest decisions are partially dictated by nature. “If something isn’t ready or ripe, or isn’t big enough, it’s not getting picked,” said Danny Royer with Great Valley Oak, an organization that improves farming efficiency with technology. “You want to be able to send the crew one time and pick as much as possible,” Royer said. (Some crops require multiple harvests.) Bruised or “ugly” produce is also passed by.

But the most important variable driving grower decisions is the cost of labor. The tight ag labor market has already driven up wages, but California now also requires more overtime pay for farmworkers. And the state’s minimum wage is due to increase gradually from $12 per hour to $15 by 2023.

When an oversupply or a food-safety scare leads to rock-bottom prices, it’s cheaper to till it in and start fresh. Even when prices are higher, Royer said, growers limit labor expenses by asking workers to pick only the best quality produce.

“The percentage of harvest is very dependent on the market,” Royer said. “If market prices aren’t great, we’re not going to go gang buster and pick a bunch of boxes.” 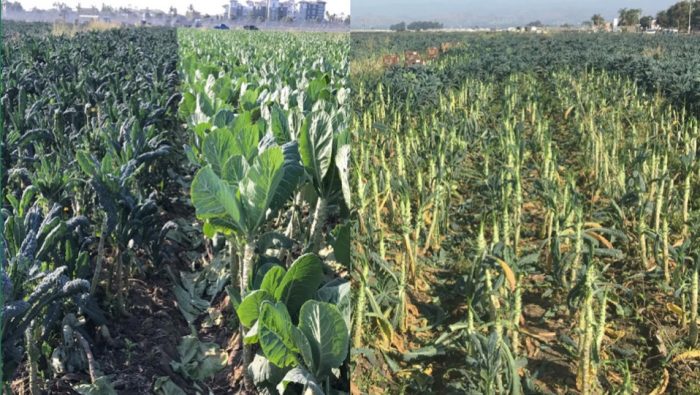 A farm field after a typical harvest (left) and after a harvest done by B2B marketplace Full Harvest (right).

A Range of Solutions Are Possible

For some growers, it’s worth donating their produce to food banks in order to earn tax incentives. Bowles Farming Company did this with some of its watermelons last year and the company was able to write off part of its losses, which made it financially viable to harvest and pack the produce, said Michael, the company’s CEO.

The California Association of Food Banks works with about 200 such growers. The fruits or vegetables are picked up directly from packing sheds (in some cases, directly from the farm) and immediately delivered to food banks in the western region, said Steve Linkhart, director of the Association’s Farm to Family program. Last year, the program shipped 164 million pounds of fruits and veggies; in July, the organization hit a record with 16 million pounds in a single month. “Anything out there that’s edible, we do whatever we can to get it to someone who can eat it,” Linkhart said.

Dozens of similar programs operate around the country, including the Borderlands Produce Rescue and the Community Food Bank in Arizona, which rescue surplus produce at the port entry of Nogales.

Still, growers can write off only a percentage of what they donate. And they say setting up the logistics of culling excess produce is complicated and costly. So, labor-intensive crops such as broccoli, cauliflower, and celery, which growers used to donate in droves, are no longer making it to food banks, Linkhart said.

“It’s sad because they grow this produce, their dads and grandfathers grew it. It’s their life and they have to stand and watch it get tilled under,” he added.

Companies including Imperfect Produce and Hungry Harvest are also trying to move the needle by delivering “ugly” produce at a discount, directly to customers. Though the approach has promise, growers say the volume rescued is relatively small so far. Some critics also suggest the companies are incentivizing farmers to overproduce to meet the demand of the ugly produce movement. Others worry that it is displacing community supported agriculture and other smaller-scale subscription services in the marketplace.

Full Harvest, a company that connects the producers of things like juice, kimchi, and baby food directly with farms to buy imperfect and surplus produce using an online B2B marketplace, offers another solution. It contracts with processors who can cover the farmers’ labor costs while paying less for produce.

“As people start waking up to the reality that food waste contributes to climate change, any company that says they’re buying surplus produce sends a powerful message. They’re helping (to reduce) one of the greatest contributors to climate change,” said Christine Moseley, founder and CEO of Full Harvest.

The most powerful changes, according to experts and growers, could happen at the retail level. Bowles Farming Company CEO Michael says he’d like to see a streamlined supply chain. Growers could work with local retailers and plant a set number of acres at a guaranteed price (currently, they work with marketing agents and the price isn’t set).

Another idea is for retailers to buy entire fields from growers so that they would own the entire crop, said Baker, the study’s author. This could incentivize more supermarket chains to create imperfect or grade B produce sections (several already do). The retailer could also process the imperfect or surplus produce into salsa, juices, and other value-added products for use in its own private label.

“What we really need is new ideas, a different way of thinking about it. Right now, all the players do what makes economic sense for them,” Baker said.

But buying and marketing imperfect produce at a discount isn’t ideal, said Gunders. “It doesn’t cost any less to get this product to market,” she said. “The idea that it should be discounted is a little flawed.”

Gunders wants to see the cosmetically perfect and the “imperfect” pieces sold together. “We should have different shapes and colors of peaches, for example, because that’s what peaches do, that’s how peaches grow. It’s the mixed beauty that nature provides,” she said. “Imperfect produce needs to go through the main channel for more of it to be accepted. The farms are massive and that’s the only way we will sell more product and move the needle on food loss.”