Is the Future of Eggs in Family Farms? | Civil Eats

Is the Future of Eggs in Family Farms?

Pete and Gerry’s organic egg company has survived for decades against very long odds by valuing small and mid-scale producers. Could it be a model for how to thrive in an otherwise cutthroat industry? 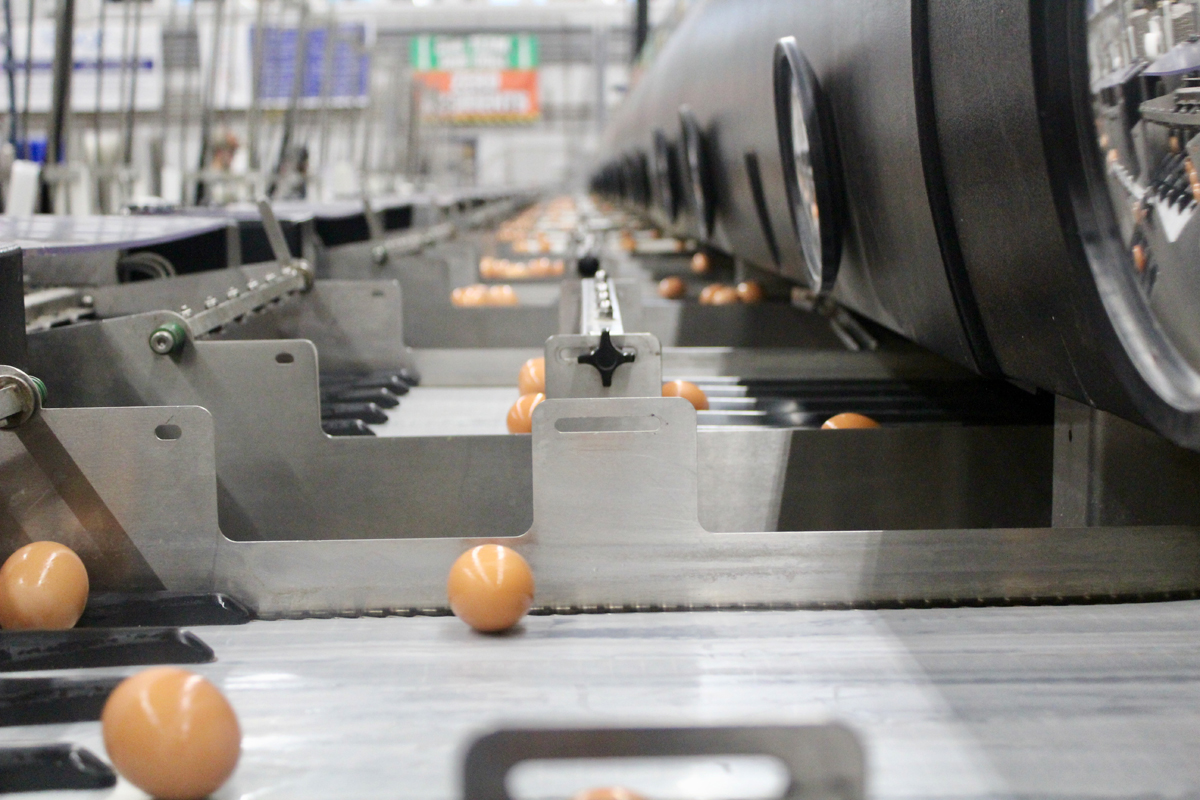 In the town of Monroe, as in all of northeastern New Hampshire, February is a month when agriculture seems an improbable prospect. On one typical late-winter morning, trees and houses lay encased in thick shells of ice after a pre-dawn storm. The world was still save for the occasional skidding-out car etching dark tire marks in a dusting of snow. What food could emerge from this frozen landscape?

And yet, up some hills there sat some barns, and in those barns there were some hens, pecking around on hay bales as they awaited spring and the freedom of grassy outdoor pastures. And from those hens there came some eggs—867,000 of them, all washed, weighed, sorted, and packaged by 1 p.m. on this frigidly inhospitable day.

The barns, eight of them in total, belong to Pete and Gerry’s Organic Eggs (P&G’s), a 68-year-old farm that has transitioned since its inception from conventional to organic to co-op. In addition to raising about 100,000 hens in Monroe, Pete and Gerry’s sources from 130 family farms in 12 states from Maine to Wisconsin, and mandates that all eggs produced under its name be free of antibiotics, synthetic pesticides, GMOs, and animal byproducts. The eggs are “free range”—which they define as meaning the birds have open access to the outdoors during daylight hours when the weather is cooperative, when they can wander in and out at will.

Family farms are central to the ethos of P&G’s, says Jesse Laflamme, its 41-year-old owner and CEO and the third generation to farm this land, which was once presided over by his grandfather. The company is named for Laflamme’s father (Gerry) and a cousin with a hand in the business, while his mother, Carol, lends her name to its non-organic heritage egg brand; its conventional egg brand, Nellie’s, is named for a beloved chicken from Laflamme’s childhood. 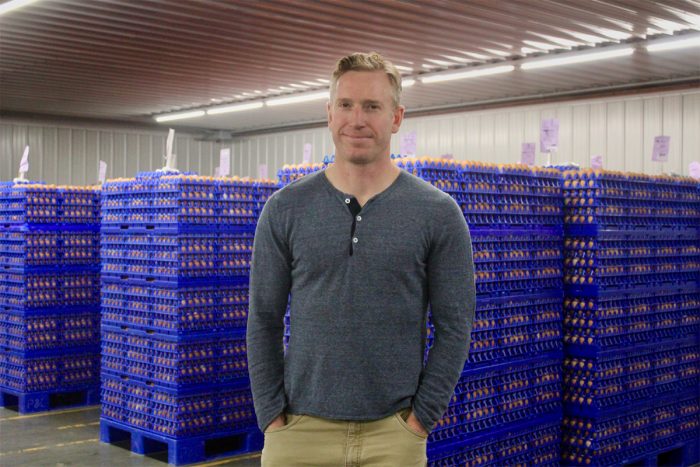 A family farm, as Laflamme defines it, is “one that the immediate family can operate to produce organically to our standards without hiring help.” That could mean as many as 40,000 hens, but, says Laflamme, “Our average farm size is 18,000 hens, from which a family can make a living without having to seek outside sources of revenue.” He says this compares more than favorably to the inline systems common in industrial farming operations, where “the density is mind-boggling.” He recognizes that his own operation exceeds his own definition of “family farm,” which is why, he says, “As the home barns depreciate, we are shuttering them.”

The egg business has undergone massive changes in the last 45 years. Once predominantly represented by such small family farms, it began to shift heavily toward industrialization and more vertically integrated systems, according to the Agricultural Marketing Resource Center (AGMRC). Where once a flock of 400 laying hens was the norm, industrial flocks today can top 5 million hens.

Not surprisingly, this has led to reports of crowded and otherwise inhumane conditions for hens confined in battery cages, with zero access to the outdoors. And to capture consumer dollars increasingly spent on eggs from cage-free, free-range, and pastured chickens; these sectors have all been growing steadily, despite concerns about legislation that allows birds to be deemed “cage-free” if they only have mere access to porches attached to barns, rather than fields and meadows.

In contrast, P&G’s has focused its efforts on animal welfare and farmer livelihood. It became the first Certified Humane egg farm in the U.S. in 2003, when it switched to a co-op model. Under this designation, all of its hens spend at least six hours outdoors, on at least two square feet of pasturage per hen, in fair weather over 40 degrees. The company was also the first egg producer to earn B Corporation status. Today, P&G’s employs 230 mechanics, packers, truck drivers, and office staff—many of them neighbors in Monroe and surrounding towns.

The company, according to Steve Forde, treasurer of the Northeast Organic Farming Association (NOFA)-NH’s board of directors, has had benefits for organic egg farming both in and out of the state. “They’ve helped raise consumer consciousness about why cheap eggs are cheap,” he says. “And they’ve been a great proponent for trying to help smaller farmers make a business of egg production.”

Growth of the Farm and Company

Laflamme’s company is now a 3.1-million-hen, $200 million business. But when he took it over in 2010, it was 30,000-hen mom-and-pop operation trying to survive the industrialization happening all around it.

“We were just a small, conventional egg farm my grandfather started cage-free and free-range [after World War II],” he says. “When my parents took over from him, they were content just being farmers who sold locally.”

But in the 1990s, industrial egg production allowed farms to expand and speed up their processing. Technological advancements, such as inline conveyor belts to move eggs away from hens in battery cages, made it possible for agribusinesses with access to capital and markets to scale up very quickly. Egg prices decreased and pressure on chicken farmers increased; many of them sold out or closed down operations. By 2017, reports AGMRC, 289 egg companies, with flocks between 750,000 and 5-million-plus hens, accounted for 99 percent of the U.S. egg market.

“My parents were really good and successful farmers, but they had nowhere to go with some of their eggs,” Laflamme said. “The eggs were piling up in coolers and rotting, and they lost more and more of their profitable accounts.”

The Laflamme’s dire straits coincided with the 2001 implementation of the USDA Organic standards, which Gerry and Carol recognized as the only avenue for their survival. And when the gruesome conditions—for animals and humans alike—at Jack DeCoster’s Maine henhouses blew up, the Laflammes understood the importance of telling the personal story of the farm. Pete and Gerry’s was born.

Jesse started working for the farm in the early 2000s, after studying political science and economics in college. “We were hanging on by our fingernails to this property,” he says. “I would go to the supermarkets and see how our product was doing on the shelf—a 23-year-old kid in an oversized suit. In those early days, we were lucky to sell 15 dozen in a month.”

Depressing as the landscape was, those store visits showed Laflamme that there was consumer demand for organic eggs. When P&G’s landed an account with Hannaford supermarkets, it was a lifeline—although soon, meeting demand became a challenge.

“We needed another 18,000 hens to keep up, but there were no other local farmers who could supply organic or free-range eggs to us,” Laflamme says. “So, every summer we’d build a barn.” Since demand wasn’t steady, surplus was sometimes an issue. The Nellie’s brand, conceived to tackle this issue, could move product even if it couldn’t command the price premium of organic.

To continue to grow, though, P&G’s would need to adopt a co-op model.

“The first farmer we found we’re still with: Emory Martin in Lancaster, Pennsylvania,” Laflamme says. “We had to go that far to find family egg farms, because in New Hampshire, we’ve largely shifted away from agriculture.”

Martin installed a cooler, the Laflammes trained him on food safety and business management, and he began producing eggs from his 8,000 hens for Nellie’s. 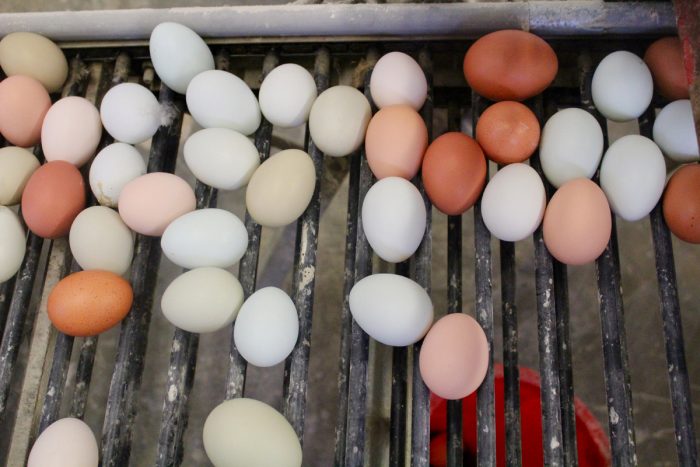 Neila Zook, a farmer in Middleburg, Pennsylvania who, with her husband, cares for 35,000 hens that supply P&G’s organic brand, finds that their 10-year relationship with the company has been a source of stability. A million dollars in debt after building two layer barns, then abandoned by another, local egg company that went bust, “was terrifying,” she says. But after P&G’s agreed to take them on, “We’ve had great success, and they’ve been a great company to work for.”

A typical P&G’s contract is 10 years long—which Laflamme notes is long from a business standpoint. “But if our farmers are going to make a living, they need time to pay off their mortgages,” he says. Outside New England (in Pennsylvania, for example), where P&G’s faces more competition and farmers have more options, he says the contracts are typically five years long.

The past decade has been good for P&G’s, with steady growth and expansion. Laflamme opened a second packing plant in Greencastle, Pennsylvania in 2014 to supplement the original plant in Monroe; he’s currently hunting for a third somewhere on the West Coast.

In recognition of the company’s success, Laflamme this summer was awarded the New England Entrepreneur of the Year award from Ernst and Young. But the company’s higher profile has also brought increased scrutiny: Earlier this year, animal-rights group PETA filed a lawsuit against P&G’s, alleging the company doesn’t live up to its welfare standards. The lawsuit claims that the doors in barns where the Nellie’s eggs are raised “are closed all winter and during inclement weather,” and “even in pleasant weather” are not open until 1:00 in the afternoon.”

Laflamme bridles at the accusations, saying the group selectively edited video it surreptitiously recorded during what was an open farm tour, with photography encouraged. “I would love to have them show the entire consumer’s journey because we have nothing to hide,” Laflamme says. “All Nellie’s farms are Certified Humane and the list [of standards] is extraordinarily long. There’s nothing on that farm that didn’t meet those standards.”

According to NOFA-NH’s Forde, P&G’s have been “great advocates for the humane treatment of animals—as well as for our health as consumers.”

Another challenge of success is one facing the entire organic industry: the rise of alternative labels that seek to go beyond what USDA Organic certification can capture, such as proposed regenerative agriculture certification.

“There’s nothing the big players of conventional agriculture like Monsanto and Cargill would love more than to create backlash around that USDA Organic seal,” Laflamme says. “They’re literally licking their chops at the idea of another label that will confuse consumers.”

He also sees a threat from labels claiming single attributes, especially those already covered by USDA Organic. He says “antibiotic-free” and “Non-GMO” certifications as distracting from what USDA Organic means, and the rise of “cage-free” means that large-scale producers can make minimum porch-building efforts and earn the same distinction as farmers who go to great lengths to treat their animals well.

Despite the challenges, Laflamme believes in the direction he’s steered his company.

“What we’re doing matters,” he says. “Family farming matters; organic farming is a reset button for small family farms. It needs to be preserved.”