Small Organic Dairy Farmers Say the Rules are Stacked Against Them. One Rule in Particular. | Civil Eats

Small Organic Dairy Farmers Say the Rules are Stacked Against Them. One Rule in Particular.

The Origin of Livestock rule is being applied in different ways by different certifiers, which producers and advocates say gives an unfair advantage to large dairies. 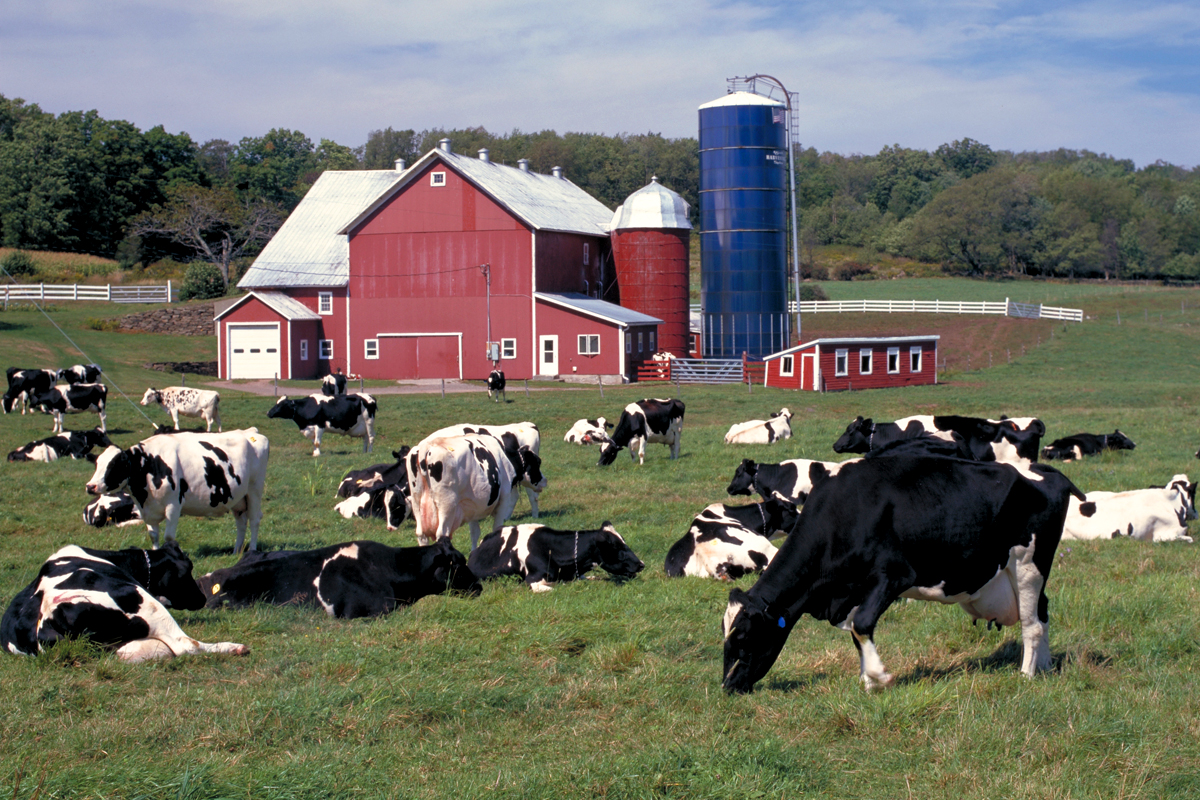 Organic dairy farmers are often isolated and don’t get to connect to each other, said Liz Pickard, a farmer at Twin Oaks Dairy in Truxton, New York. But right now, when they do, the National Organic Program’s (NOP) “Origin of Livestock” rule is a hot topic.

“Everyone’s talking about it. It’s a huge deal,” she said on a recent phone call from her farm, as she cursed a stalled tractor. “This is probably one of the biggest things that’s putting a drag on the milk market right now.”

Just like crops cannot be certified organic until the soil they’re grown in has been under organic management for three years, the Origin of Livestock provision was included in the United States Department of Agriculture (USDA) organic regulations to specify how long an animal must be under organic management before its milk can be called organic. But many farmers say the rule is being interpreted differently by different certifiers, putting small, family-owned dairies at a disadvantage.

While the provision requires livestock to be raised organically since before birth, it offers a one-time exception for farmers who want to convert a conventional herd.

The controversy is over that exception—farmers say some certifiers allow large, industrial organic dairies to repeatedly add cheaper-to-feed, conventionally raised calves to their herds and then convert them to organic over a shorter time period. Able to grow their herds quickly and inexpensively, small farmers say the dairies that operate this way flood the market with cheap milk, undercutting dairies that are held to a different standard.

A diverse group of stakeholders in organic food and agriculture agree that the rule should be updated for clarification, and they’re pushing for the USDA to finalize an updated rule proposed in 2015 that would fix the discrepancy. In April, the Organic Farmers Association (OFA) sent Agriculture Secretary Sonny Perdue a letter on the issue, and more than 60 groups signed on, including organic certifiers from across the country, industry groups, farmer associations, and environmental organizations (some of which are rarely aligned). Perdue responded with a letter that did not commit the USDA to any action, stating that the agency, “continue[s] to review stakeholder feedback on this topic.”

On July 17, at a House Committee on Agriculture hearing on enforcement of organic standards, Representative Chellie Pingree (D-Maine) grilled Agriculture Undersecretary Greg Ibach on the topic. “I discussed this with Secretary Perdue … earlier this year, and he said to me, ‘Well there are some opinions on either side,’” Pingree said. “No, there are not a lot of opinions on either side. This is a real consensus item.”

And while groups such as the Northeast Organic Dairy Producers Association (NODPA) have been working on the issue since as far back as 2006, it’s coming to a head now because, while large organic dairy operations in the South and West have grown, many small and mid-sized organic dairy farms are struggling to survive.

More than half of the roughly 125,000 (conventional and organic) dairy farms that operated in the U.S. in 1997 have disappeared, with more than 15,000 lost between 2007 and 2017 (and many more in the two years since those numbers were reported in the latest Agricultural Census). For a long time, organic dairies were shielded from that shrinking market, as demand for organic milk rose and companies paid a premium to farmers. But that has changed in the last several years.

NODPA president Ed Maltby, a dairy farmer for 40 years, said New York’s farmers are now being paid five to six dollars below the cost of production for organic milk. He adds that some farmers who belong to NODPA (a membership-based nonprofit) are retiring or switching back to conventional milk, since it costs less to produce. He points to the Origin of Livestock misinterpretation as a core problem.

“That unfair playing field has an impact, and it’s on quite a few different levels,” he said. “One of the prime reasons that we’re pushing so hard is partly the economic sustainability for our members and all organic dairies. It’s also to maintain the integrity of the organic label.”

“We never bring in new cows,” Liz Pickard said, and that’s true of the majority of small organic dairies, unless they’re going through a significant expansion.

In fact, since dairy cows give birth once a year in order to continue producing milk, most dairies have extra calves they sell annually. If they’re in need of new milking cows to replace those that are aging out, they raise the calves according to organic standards from birth, feeding them exclusively organic milk and organic grain. After two years, those cows reach breeding age and can start producing organic milk.

When the animals are raised in that way, their milk is eligible for organic certification under the Origin of Livestock rule. And the NOP allows for one exception, which is where the controversy begins. Essentially, the rule was written with an exception, to allow farmers with existing conventional dairy herds to transition an “entire, distinct” herd to organic certification over a period of one year.

Farmers and advocates say that the rule was always meant to allow for that transition one time, to create a pathway for conventional dairy farmers to convert to organic management with the expectation that growers would then raise calves organically from birth once they had an organic herd in place. But the language in the rule was vague, and evidence started to emerge showing some certifiers, which are responsible for making sure farms are meeting the organic standards, were allowing large organic dairies to “continuously” utilize the exception, purchasing and transitioning conventional cows to organic whenever they needed them.

In an audit conducted by the USDA in 2013, the agency found that three of the six certifiers the agency interviewed interpreted the rule in this way, in that they “allowed organic herds to continue to be transitioned and producers to add cattle to organic herds.”

The Cost of an Organic Calf

That interpretation hurts small organic dairies raising calves organically from birth, explained Fay Benson, a dairy farmer for 20 years who now works for Cornell University’s Organic Dairy Initiative. “The [organic] feed is the biggest cost of raising a heifer, since you’re raising it for two years without any kind of return,” he said. (A heifer is a young cow that has not yet borne calves.)

At a New York Organic Dairy Task Force meeting in March, the group talked about the Origin of Livestock issue and directed funding to Benson in order to allow him to study what that cost differential really looked like.

While Benson has not completed the research yet, he has been gathering data from three organic dairy farms and comparing it to research that had already been done at Cornell on the cost of raising a conventional calf. At one of the farms in his study, he found that the cost of raising a heifer for its first 60 weeks was $3,628 or nearly triple the $1,274 cost of a conventional heifer.

In other words, if a certifier allowed a farm to continuously transition in new cows, those cows would cost much less for that first year, up until the farm began feeding organic feed in the second year for the transition period.

Why would a farm even need a continuous supply of cows if it was raising a herd organically and producing new calves each year?

Essentially, a large-scale operation could sell off the organic calves being born on its farm and buy in cheaper conventional heifers to transition over one year. Being able to cheaply rotate in new cows also allows farms to produce more milk. Small organic dairies generally keep production at a rate that maximizes a cow’s life span, because intensive production causes the cows stress that many people consider inhumane, and the cost of raising heifers is so high.

“[Large dairies] maximize production by feeding large amounts of grain, which shortens the cow’s life,” Benson said, “and then they need to replace those burned-out cows.”

A particularly egregious example is reported in a letter that CROPP Cooperative, the coop behind Organic Valley, sent to Secretary Perdue in November 2018 in support of fixing the Origin of Livestock loophole. In the letter, Chief Mission Officer Melissa Hughes reports that one state agriculture department, which is an accredited organic certifier, “permits an organic cow … to give birth to a heifer calf, rear the calf conventionally, and then transition it back to organic status for organic milk production.”

All of this is compounded by the fact that small organic dairies already have a hard time competing with large industrial operations, Maltby said. “The cost of organic milk we produce on a small operation, it’s higher than some of the larger operations that have economies of scale when it comes to labor, feed, etc.,” he said.

After the 2013 USDA audit, the Office of the Inspector General recommended that a proposed rule be issued to clarify that the Origin of Livestock provision only allowed for a one-time transition of a dairy herd.

In 2015, the USDA posted the proposed rule and opened it for public comment. However, after the comment period ended, the rule was never finalized.

In addition to the letter the Organic Farmers Association sent to Secretary Perdue, director Kate Mendenhall said OFA made the issue a policy priority for 2019 and testified about the rule at the last meeting of the National Organic Standards Board (NOSB), which advises the NOP on rulemaking.

The pressure from all of these groups, including legislators, may bring the issue back to the fore. A USDA spokesperson told Civil Eats the agency “is moving forward with the Origin of Livestock rulemaking process and exploring the best ways to get that completed. We hope to have a draft for inter-agency review this year.”

Of course, many advocates bristle at repeating that process, just four years later. “It’s completely unacceptable,” Rep. Pingree said at the July hearing. “We had a proposed rule in 2015 … there should be a final rule this year.”

Mendenhall put it even more bluntly. “[Organic] dairy is suffering right now,” she said, “and it’s a direct result of a lack of proper enforcement by the National Organic Program.”