300 California Communities Can’t Drink From the Tap. Will More Money Make a Difference?

A new fund created to direct cap-and-trade dollars to communities could bring clean drinking water to the state's agricultural communities. 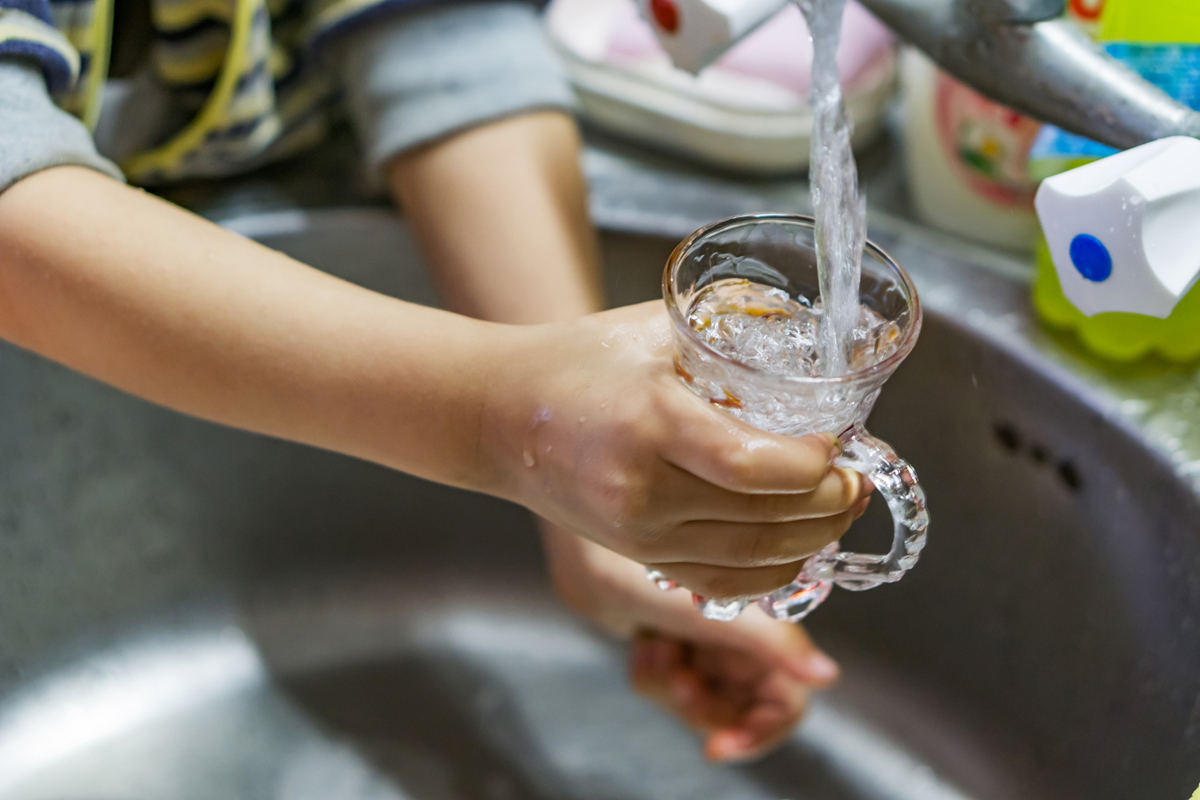 Maria Olivera has lived in the rural community of Tooleville, in California’s Central Valley, since 1974. During that time, she’s not sure if the water in her home has ever been safe. For decades, she heard whispers about the nitrates and chemical pollutants, only to learn 15 years ago that the rumors were true. Now, like her neighbors, she uses bottled water to drink and cook with, but she still bathes in the water that comes from the faucet.

“Some people—they say they have rashes [from bathing with it],” said Olivera, a retired farmworker. “I haven’t had any. But maybe in the future, I could get cancer.”

According to the California State Water Resources Control Board, more than 300 public water agencies in the state dispense contaminated drinking water, a public health crisis affecting about a million residents. The agriculture industry is a major contributor to this problem, with fertilizers and manure leading to nitrate contamination after they leach into the ground. Nitrates are inorganic compounds that occur both naturally and synthetically and have been linked to cancer and toxic algae blooms. They can be particularly dangerous for infants, causing “blue baby syndrome,” a potentially deadly medical condition that prevents blood from carrying oxygen.

The frenzy of groundwater pumping that took place during the state’s recent four-year drought also ramped up the amount of arsenic in drinking water. Most of the residents affected by the water crisis live in areas where there aren’t enough customers to pay for the building and maintenance of water treatment facilities, which can total millions of dollars. Tooleville, for example, an unincorporated farmworker comunity about an hour southeast of Fresno, has a population of fewer than 400.

Advocates for these communities are counting on new legislation to change matters. Senate Bill 200, which Governor Gavin Newsom’s signed into law last week, establishes a Safe and Affordable Drinking Water Fund in the state treasury to enable water systems in California to provide “an adequate and affordable supply” of potable water to residents. 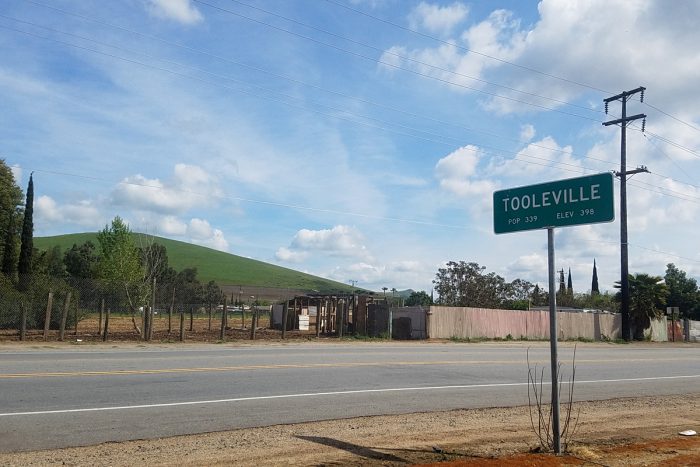 For the next decade, the state may spend up to $130 million annually to ensure Californians in vulnerable districts have water. Rather than raise taxes to help communities in the Central Valley maintain and treat their water supply, the state will route money from both its Greenhouse Gas Reduction Fund (GGRF) and its General Fund to the State Water Resources Control Board to support the drinking-water fund.

“Safe drinking water is a basic human right,” California State Sen. Bill Monning (D-Carmel) told Civil Eats. He introduced the legislation along with Assemblymembers Eduardo Garcia (D-Coachella) and Richard Bloom (D-Santa Monica). “SB 200 will help ensure that right becomes a reality through the establishment of a sustainable funding source that will help communities where the high cost of treating or providing clean drinking water is prohibitive for low-income residents.” 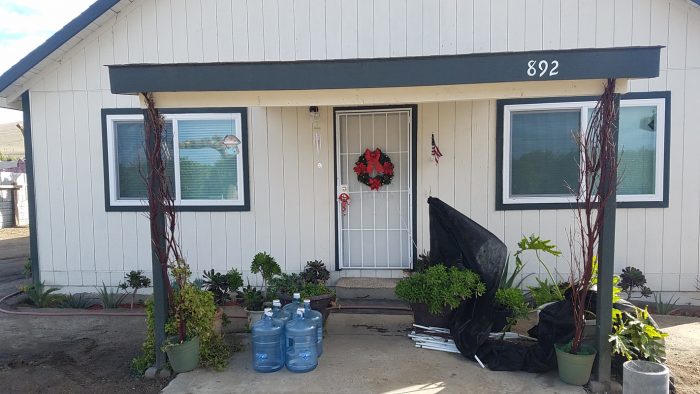 A delivery of 5-gallon water jugs outside a Tooleville resident’s home. (Photo courtesy of the Leadership Counsel)

Efforts to give all Californians access to clean drinking water will continue to face obstacles, including climate change and the historic racial and class divides that facilitated this public health crisis. The new legislation also has a prominent opponent in State Senator Bob Wieckowski (D-Fremont). A frequent supporter of clean drinking water efforts, Wieckowski disapproves of SB 200 because most of the funds for the initiative will come from the GGRF.

“Californians should have both clean water and clean air,” he told Civil Eats. “Instead, we created a false dichotomy between the two.”

After waiting more than a decade than for clean water, Californians affected by the water crisis simply want to be able to drink from their tap, no matter the funding source. Although Olivera, 65, said that she’s in good health, her fears about the impacts of bathing in polluted water never vanish.

“It’s scary,” she said. “This is something serious.”

Why the Water Crisis Has Persisted

The water in East Orosi, California, is so bad that Felipe, a farmworker who recently discussed his struggle to access clean water during a tour hosted by the Central California Environmental Justice Network, hasn’t used the fountain he installed in his own yard. So contaminated by nitrates, the water from the fountain turns green when exposed to sunshine.

“When I wash my car, if I don’t wipe it down, it turns white,” said Felipe (who did not provide his last name).

As a result of a state grant administered by community development organization Self-Help Enterprises, East Orosi residents like Felipe receive five 5-gallon water jugs every two weeks. But the jugs aren’t always enough. Families who need more have to pay it for extra water themselves.

“It has been 15 years since we could use the water,” said Benedicto, another farmworker, who also did not provide his last name. “I installed a [home] filtration device, but it has been hard to maintain and expensive.”

Ryan Jenson, community water solutions manager at Community Water Center, said that residents should not have to bear this burden. He expressed concern about the sustainability of these systems as well.

“It’s not always clear that such systems will solve the problem, given the level of contamination in some communities,” he said. “There’s no way to guarantee—aside from sending samples to a lab—that these filtration systems are working. In East Orosi, the water is contaminated with high levels of nitrates as well as 1,2,3-TCP (Trichloropropane). Both are tasteless and odorless, so home filtration systems might also give community members a false sense of safety.

Both Felipe and Benedicto hope that the Safe and Affordable Drinking Water Fund will result in the water system in East Orosi, which has a population of about 500, being consolidated with its neighbor Orosi, which serves potable water to nearly 8,800 people. A 2018 report by the U.C. Davis Center for Regional Change found that almost 80 percent of San Joaquin Valley communities without safe drinking water are about a mile away from communities that do have access to this resource. 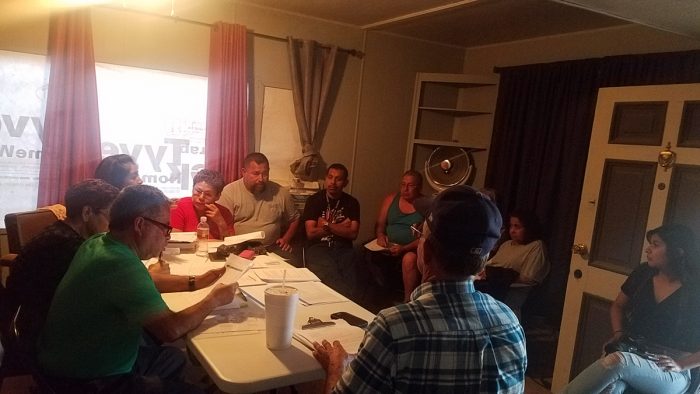 A community organizing meeting in Tooleville. (Photo courtesy of the Leadership Counsel)

Over the years, efforts to get larger communities to merge or consolidate their water systems with smaller communities have failed, mainly because the members of the former fear they will have to cover the cost of improving water infrastructure for the latter. In some cases, residents from small, low-income communities simply cannot afford the higher water rates likely to come with consolidation. In particular, the communities of East Orosi and Orosi have yet to come to an agreement about how merging their water systems would work.

“I think consolidation can be a very smart solution, but there are also barriers that complicate consolidation,” said Pedro Hernández, a policy advocate for the Leadership Counsel for Justice and Accountability, an organization that serves California’s rural and low-income communities.

The fact that the state’s rural, impoverished communities of color are going without potable water isn’t a coincidence, Hernández said, but is instead the legacy of historic racism. In the first half of the 20th century, restrictive covenants kept people of color out of more centralized and privileged communities and relegated them to the margins. Today, it is these “fringe” communities that lack clean water—despite their proximity to cities that do.

“There is no current funding for operation and maintenance [of many water systems],” she said. “The reality is that when you don’t have that, these systems are continually out of compliance. People are paying $90 a month for water they can’t drink.

When the agricultural communities that have water sit just a mile or two away from cities that don’t, the class and racial divides that determine which Californians get access to natural resources become difficult to ignore.

“Tooleville has been waiting for 15 years to consolidate their water system,” Hernández said. “They’ve run into multiple obstacles and just outright resistance.”

The community of Matheny Tract, near Tulare, contended with a similar situation until 2016, when clean drinking water flowed from residents’ faucets for the first time since the drought dried up its water supply. The breakthrough came after years of legal wrangling with the city of Tulare, just two miles away, and California passed legislation such as Senate Bill 88, which urges larger municipalities to provide drinking water to smaller ones. The legislation authorizes the state to require cities to consolidate water systems, if necessary.

By providing funding for water maintenance and infrastructure, however, SB 200 gives small rural communities the support they need to repair their water supply without protracted negotiations with larger municipalities. 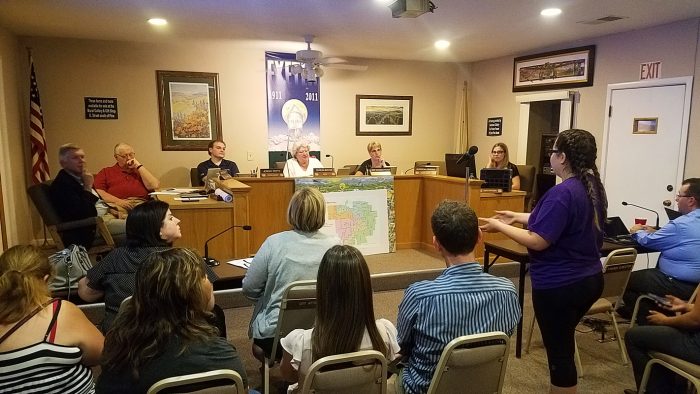 “This is why this bill is such a victory for the short term and the long term,” de Anda said. “I’ve been working on this issue for over a decade, and this is our biggest success, and it’s been driven by impacted residents. It’s a huge victory to the folks impacted by this reality.”

Although Wieckowski stands out as the sole legislator to have opposed SB 200, he calls it shameful that so many Californians lack access to clean drinking water. He pointed out that this public health crisis led the state to become the nation’s first to enact a law identifying water as a human right. Signed by then-Governor Jerry Brown in 2012, the legislation states that “every human being has the right to safe, clean, affordable, and accessible water.”

Wieckowski wants to make it clear that he doesn’t object to helping communities in the state get access to clean water, but instead to the way the state has chosen to serve them. He says California has options other than taking money from the GGRF to address the water crisis.

“We need to continue consolidating small water districts to … provide adequate treatment and delivery of safe drinking water,” he said. “We also need to do a better job of instituting water conservation measures and replenishing our groundwater aquifers.”

But Monning, the sponsor of SB 200, said that there is a clear overlap between climate change, sparked by greenhouse gas emissions, and the prevalence of unsafe contaminated water. He says this connection makes the GGRF a legitimate source of funding for the water crisis. Specifically, climate change “intensifies drought, reduces surface water flows, accelerates declining groundwater basins, and contributes to increasing concentrations of contaminates,” Monning told Civil Eats. “Providing safe and affordable drinking water now will prepare communities to be resilient against the future impacts of climate change.” 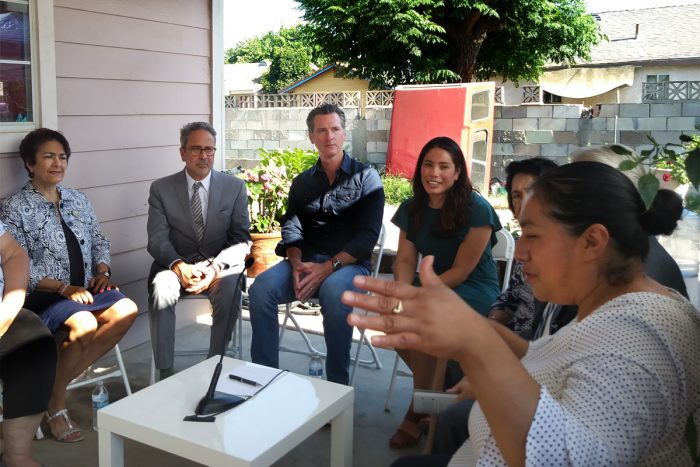 Using money from the GGRF provides an immediate solution to the water crisis, which environmental justice advocates say should raise as much concern as the water crisis in Flint, Michigan, or the Dakota Access Pipeline. Monning said that the state is working to reduce carbon emissions, but the water crisis requires lawmakers to also “be mindful and attentive to the present-day victims of climate change.”

With one out of three water districts at risk of failing to provide clean water in the near future, Californians need short- and long-term solutions to the crisis now, environmental justice advocates argue. Pedro Hernández supports SB 200 because of its flexibility, he said. It not only offers support to cleanup nitrate contamination but also to individuals and small communities, including Native American reservations, struggling to access clean water.

“The need is still very great, and there has been no long-term sustainable solution,” he said. “I do feel this piece of legislation will take a significant step toward progress.”

De Anda calls the new law the “missing link” to curbing the water crisis in a changing climate. “We’ve been the canaries in the coalmine, but our people have been living in these communities for a long time, and we’re not going away.”