Castanea and Seeding Power fellows are addressing racial inequities within the food system. 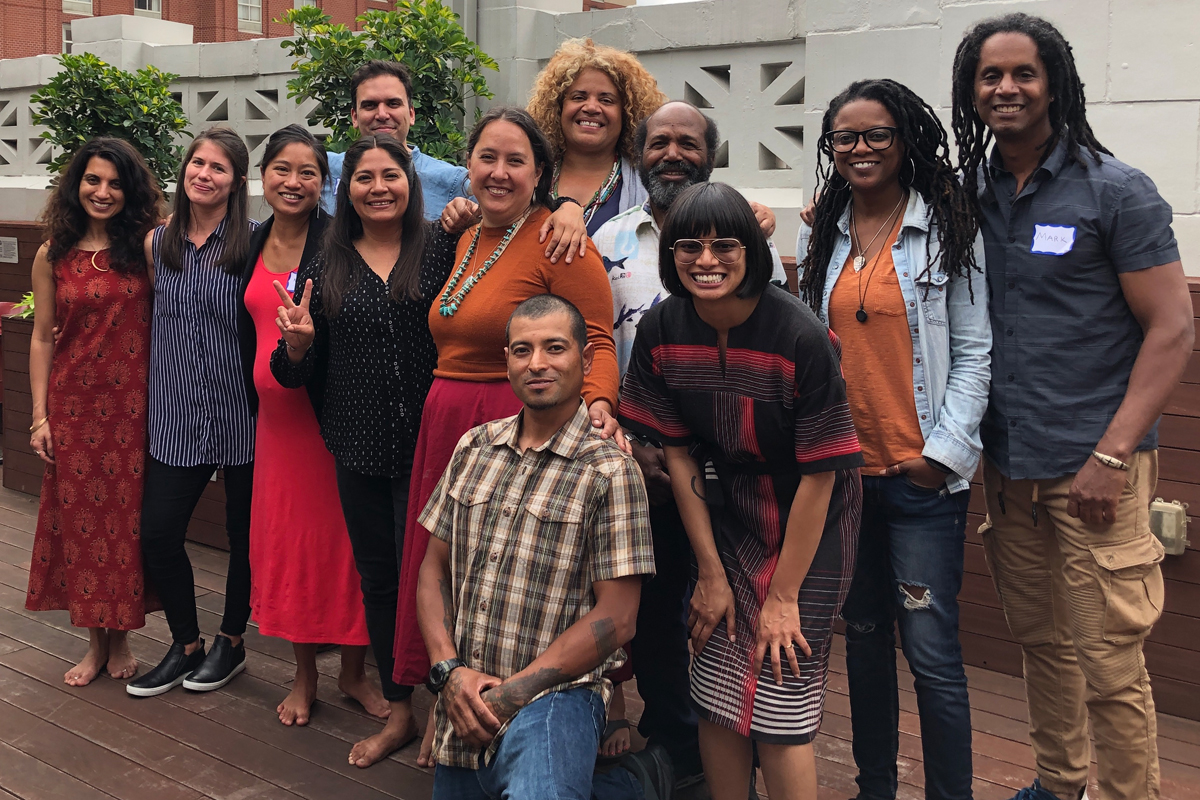 Since 2013, Mark Winston Griffith has been working to launch a food co-op in central Brooklyn. In a neighborhood where gentrification has squeezed to the margins the community that has been there for generations, Griffith and the Brooklyn Movement Center, where he works, envision a co-op as part of a broader effort for the local Black community to gain control over the neighborhood food system.

Over the course of planning, Griffith has considered local economic impacts, employment, pricing, and more. But after meeting in June with the rest of his cohort in the inaugural year of the food justice-focused Castanea Fellowship (pictured above), Griffith realized he’s been overlooking a key player: farmers.

Now, as he works to revamp the urban neighborhood’s food system, he’s planning to focus his energy on building relationships with food producers in the regions that surround the city. “We really have to have a deeper understanding of how our work is impacting farmers,” he said. “We have to contribute to making sure that they are making a healthy living.” He’s also starting to reconsider how pricing should work at the co-op, looking beyond how costs impact the local Brooklyn neighborhood to how they impact producers.

The two-year Castanea Fellowship, which launched this year with a cohort of 12 fellows, brings together leaders from across the country with a broad range of expertise and experiences, including indigenous agricultural practices, issues impacting farmers of color, inequity in urban food systems, health, and more.

In selecting fellows from a pool of 415 applicants, the program sought out people from diverse racial and geographic backgrounds on the “front lines” of the movement, according to executive director Farzana Serang. “We want folks who are leading the conversation about improving the food systems to be the ones who understand those issues the most,” Serang said.

The program provides each fellow with $40,000 in grant funds to be used toward a charitable purpose, plus transportation. When fully operational with two cohorts, the annual budget will be slightly over $1 million.

Castanea is part of a new crop of fellowships at the regional and national levels aiming not just to train the next generation of food leaders, but to foster connections among advocates working in different aspects of the food system. The idea is to create a more unified movement with a focus on pushing for greater racial equity.

In New York, the newly launched Seeding Power Fellowship from Community Food Funders is striving to coalesce a unified food movement within the region. With a budget of roughly $230,000, the fellowship brings together food system leaders from Long Island, New York City, and the Hudson River Valley where, despite working in close quarters, advocates are often disconnected from each other even when they have shared goals, according to Adam Liebowitz, director of Community Food Funders.

“It creates a false impression of competition, or being at odds, or at the very least not being allies,” Liebowitz said.

Organizers at Seeding Power set out to unite people from different backgrounds to create a more comprehensive movement pushing for racial equity in New York. In order to leverage the power of the fellowship, the program limited applicants to people who are already established in their careers and in positions of leadership within their organization. The program’s 12 fellows, selected from a pool of 57 applicants, represent farmers, urban farmers’ markets, rural education initiatives, and more. Each fellow receives $5,000 for participation. 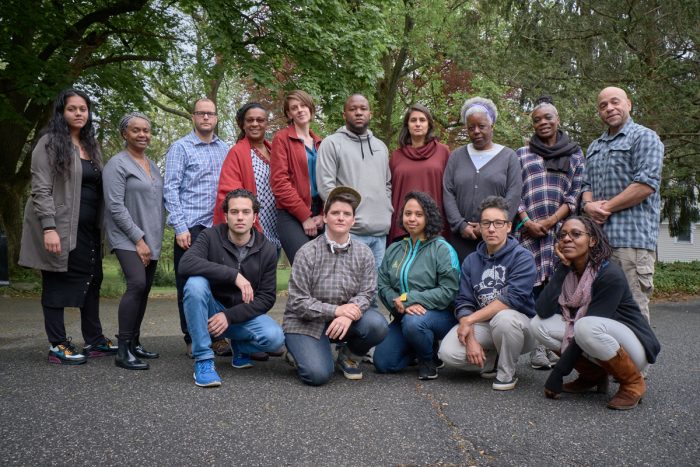 Sandra Jean-Louis, a Seeding Power fellow whose work with Public Health Solutions focuses on food security among older public housing residents, said uniting advocates from different corners of the food system creates more efficiency. Right now, organizations working toward the same public health goals can end up inadvertently competing with each other for resources. “We are running after the same dollars,” Jean-Louis said. If organizations could coordinate on grant applications with other like-minded groups, she said, it could amplify their efforts.

The fellows, who have so far gathered for two of the total of five retreats they’ll participate in over the course of the 18-month program, have already started finding new common ground.

Workers on farms, in restaurants, and at street vendor carts face similar “injustice and unfairness,” according to Attia, who worked as a food vendor in New York, first selling pretzels and hot dogs in Times Square and later running a halal cart. The program, he said, offers space for people from different backgrounds to connect around common issues.

“I’m sure there are hundreds or maybe thousands of organizations with food workers all across the nation. But imagine if all these people have one voice,” Attia said. “I think that would be super helpful and super powerful.”

A Focus on Racial Equity

Both the Castanea and Seeding Power fellowships identify addressing racial inequities within the food system as a central part of their mission, and both cohorts include a majority of people of color.

Shorlette Ammons, of the Center for Environmental Farming Systems (CEFS) at North Carolina State University and a Castanea fellow, said the diversity of the cohort sets the stage for the conversation to center on communities that have historically been marginalized.

Ammons, who grew up in a small town in eastern North Carolina and focuses on the experience of rural Black farming communities, says those perspectives are key for helping to build collective solutions, as are others represented in the group.

The members of the Castanea cohort are deeply connected to their cultural roots, noted Rowen White, a fellow who works with the Indigenous Seed Keepers Network. The diversity within the group encourages participants to draw on their backgrounds, she said, which stands out. “A lot of the times in professional spaces, people are asked to check a lot of things at the door.”

She added, “It just gives insight into where the food systems movement can go when we really allow ourselves to really be present with all of the ancestral wisdom and lineage and knowledge and power that comes with our cultural inheritance.”

While fellowships tend to serve only small numbers of people, food policy experts say they can be effective ways to shape conversations over time.

For author and advocate Anna Lappé, her participation in the W.K. Kellogg Foundation-sponsored Food & Society/Food & Community fellowship programs, which operated from 2001 to 2013, helped her make connections and develop skills that are the foundation for her work with the food system. “New organizations have been born, lifelong relationships cultivated, and deep strategic thinking has come out of fellowships,” she explained by email to Civil Eats.

Now a member of Castanea’s steering committee, Lappé sees fellowships as “critical” to tackling the major issues connected to the food system. “I’ve always believed that the transformational work needed to address these food system-driven crises cannot be achieved in isolation,” Lappé said.

Food justice advocates are often focused on one aspect of the system, like improving nutrition or calling for the rights of laborers, according to Nick Freudenberg, professor of public health and director of the CUNY Urban Food Policy Institute and a member of Seeding Power’s selection committee. The splintering of efforts within the sector, he said, has “compromised the effectiveness of the food movement and the food justice movement.” But by bringing people together, fellowships can overcome those barriers.

Kathleen Merrigan, executive director of the Swette Center for Sustainable Food Systems at Arizona State University and the former deputy secretary of the U.S. Department of Agriculture, sees fellowships as valuable training ground for emerging leaders in the food system. Not only are farmers and ranchers aging, food policy experts in the federal government are also retiring, she said.

Programs that provide resources and time to people working in the food system help them prepare to take on bigger roles. Fellowships also provide valuable spaces where people can collaborate, exchange ideas, and find community.

“The work is hard, and sometimes the work can be lonely,” Merrigan said. “It’s really great to have a cohort approach to problem solving and food system work.”

Food Fellowships on the Rise

Fellowships are currently popular within the food sector—both Merrigan and Freudenberg are launching their own. Merrigan is helping establish a program for food policy leaders, and Freudenberg is creating one aimed at young adults.

Neither worry about duplicating efforts too much. Some programs coordinate with each other; for instance, leaders from Seeding Power, Castanea, and a third program, the HEAL Food Alliance, have been in contact about their efforts. However, Merrigan does caution that there could be limited financial resources to support programs.

But, while interest in food is at high right now, Merrigan doesn’t see a unified reform movement. “We have a long ways to go before it’s a sufficiently powerful social movement to transform the system, as many of these fellowship programs suggest is their aim,” she said.

For Griffith, who is working to open the neighborhood food co-op in Brooklyn, the fellowship is a launching pad. He feels the results of the Castanea Fellowship will play out over years and generations, as factors shaping the food system change. Griffith hopes participating in the fellowship will help Brooklyn Movement Center’s hyper-local work connect with efforts across the country to change food structures.

“At the end of the day, you know, your local community cannot be an island,” he said. “You have to fit into broader structures; you have to be able to change policies and the ways of doing business, across the board.”