The coalition of Black and brown urban farmers and gardeners is a voice for social justice in ‘America’s Garden Capital.’ 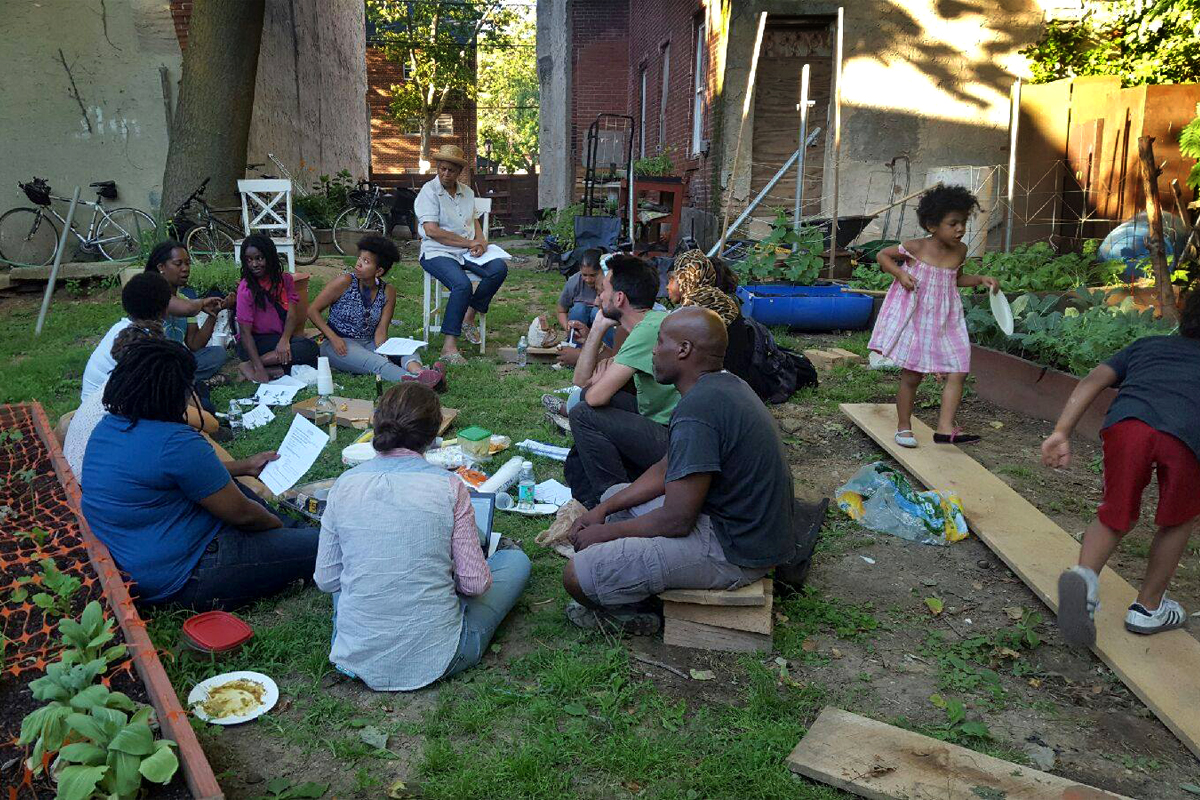 Khenti Pratt’s community garden was an oasis for neighbors, and a source of sustenance and pride. She poured time and money into transforming a blighted Philadelphia lot into a space teeming with vegetables and flowers, the site of classes and other community events, and the winner of a City Gardens Contest award.

But after 17 years, the Philadelphia woman found out at a public meeting that a developer had purchased the land.

“[The developer] said in front of the Zoning Board and he talked to me on the side, he said, ‘I’m not going to bulldoze your garden right away. I’m for gardens; I want to help you actually garden,'” Pratt told the Philadelphia Inquirer in 2013. But despite a petition from neighbors, within a few months, the garden was uprooted to make way for an apartment building.

Experiences like Pratt’s have for years been common all over Philadelphia. Though the city dubs itself America’s Garden Capital, the distinction offers little protection to residents who grow on vacant lots, only to see their gardens bought out from under them and bulldozed. And although Pratt’s garden couldn’t be saved, its loss has served as a lesson learned, a sort of launch pad.

The result was Soil Generation, a coalition of Black and brown gardeners, farmers, and organizations seeking to help people of color regain community control of land, while creating a culture shift within the food system. Access to land and a revision of the narrative about urban farming are essential, community leaders say, because many gardens in Philadelphia are much more than fair-weather hobby farms. 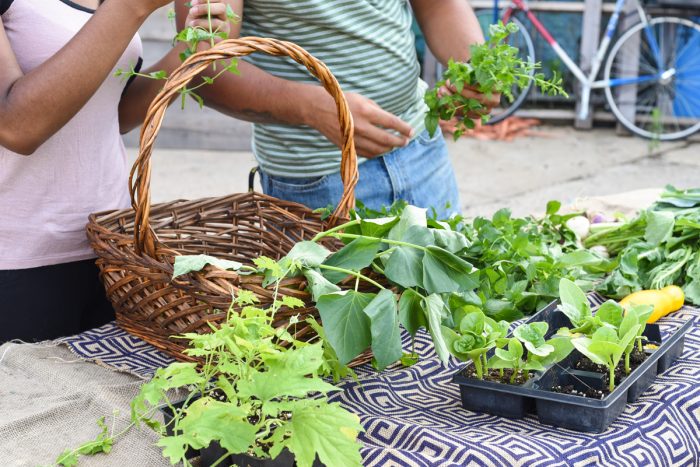 Photo courtesy of Soil Generation and the POC Environmental Coalition.

“The dominant narrative is about younger white Millennials coming into cities and grabbing land to farm,” said Kirtrina Baxter, a community organizer with Soil Generation. “But the majority of gardens in our city are concentrated in areas with some of the highest poverty levels, [and the residents are] mostly Black and brown. We’re not just talking about gardening as a pastime.” Instead, says Baxter, the coalition is working to get city lawmakers to see gardening as a much-needed source of healthy food and a spiritual necessity for some communities.

A Diverse Garden Tradition, Swept Aside by Gentrification

Immigrants and people of color have long led the way when it comes to gardening and urban farming in Philadelphia. The city was designed as a “green country town” on a grid of broad intersecting streets, where even the smallest lot had enough space for a garden or orchard. Beginning in 1945, thousands of descendants of former slaves moved to Philadelphia from the South as part of the Great Migration, bringing their agrarian roots. Today, African Americans make up about 43 percent of the city’s population. More recently, immigrants and refugees arrived from Asia, Latin America, the Caribbean, and Africa, many also hailing from rural farming backgrounds.

While Philadelphia grew more diverse, post-industrialization led to shuttered factories, a loss of jobs, and “white flight” to the suburbs, which left large amounts of land throughout the city vacant and abandoned. Many lots went unoccupied for years, turning into eyesores, dumping grounds, and magnets for illegal activities.

Over the past few decades, neighbors started cleaning up some of the lots, planting vegetables and flowers. Their goal was to beautify and improve the safety of the neighborhood, Baxter said, but they also planted out of necessity: They needed food. Many of the gardens were established in neighborhoods where grocery stores are nonexistent and people have to rely on corner stores to feed their families, she added.

At nearly 26 percent, Philadelphia’s poverty rate is the highest among the nation’s 10 largest cities and has held steady at that level for years. Most of the 400,000 poor Philadelphians are people of color, and some neighborhoods have astronomical poverty rates, as high as 61 percent.

But as development pressure increased and gentrification occurred throughout much of Philadelphia, the gardens—many of them established as hubs of community activities for years—started to disappear. It turned out the city was selling vacant lots at sheriff’s sales, public auctions of property repossessed to satisfy unpaid city obligations such as water bills or property taxes.

Enter Soil Generation: The coalition formed seven years ago as Philadelphia was revising its zoning code for the first time in half a century. It grew out of a campaign to protect gardens from a zoning amendment, and became a voice for social justice for gardeners and urban growers. Soil Generation was originally convened by the Public Interest Law Center, which has provided pro bono legal support, policy research, and advocacy to community gardeners. 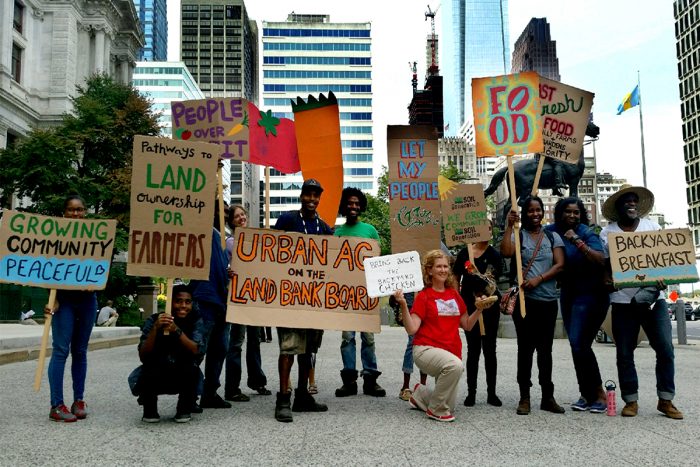 Photo courtesy of Soil Generation and the POC Environmental Coalition.

“People found signs on their garden properties that said they needed to vacate. Gardens that had been there for 10 years or more were sold off,” Baxter said. “Right now, everyone is just scared.”

Soil Generation has held monthly community meetings that touch on everything from local land history to what it takes to work with policy makers. The group has organized a series of events focused on vacant land. It has also brought gardeners and other community leaders to Philadelphia City Hall, where members recent held a rally in support of community access to land and calling for a moratorium on sheriff’s sales of established gardens.

Today, there are more than 42,000 vacant plots in Philadelphia, and an estimated 400 gardens are tended on such plots throughout the city, spanning multiple parcels and both public and private owners.

City bureaucracy has been a major hurdle for gardeners who want to lease or buy vacant lots. Multiple city agencies hold land, each with its own process, making the act of purchasing a plot spanning multiple parcels and owners a herculean task. In addition, an archaic tradition called councilmanic prerogative gives city council members the final decision over how city-owned land is used or sold.

Soil Generation was an important voice in helping to secure passage of a citywide land bank bill in 2013. The land bank is a redevelopment tool meant to simplify the land acquisition process and quicken the pace of putting derelict properties back into use. The Philadelphia Land Bank began work in 2015, but community leaders say it mainly caters to developers.

It’s unclear how many gardeners have expressed interest in purchasing the vacant land where they grow, or how many have actually done so. The Land Bank did not respond to requests for information from Civil Eats.

The Land Bank also gives out licenses to gardeners. Thus far, it has given out such licenses to just 62 lots, according to its 2019 strategic plan and performance report. But the licenses are for one year only. And investing in land for a single growing season makes little sense given how much energy it takes to develop a garden, said Baxter. For that reason, Soil Generation gardeners are pushing for 3-5 year leases as well as leases that allow for a path to ownership.

Soil Generation is also pressuring the city to end its 10-year tax abatement, a tax break for all companies building new developments. The abatement was originally created to boost the local economy during the recession, but it’s now a major driver of gentrification and displacement of poor residents, community leaders say.

Land as a Lifeline for Black Growers

For some gardeners, saving threatened gardens and providing better land access to communities of color is about more than food access.

“We believe in reclaiming the power of the land, regenerating our ancestral knowledge rooted in the land, and using nature as a teacher,” said Shakara Tyler, a Philadelphia native, urban farm educator, and member of the Black Dirt Farm Collective.

“Land is the womb,” Tyler said. “We’re reclaiming land as a lifeline.”

But this return—or “rematriation,” as Tyler calls it—can be difficult, especially for African Americans. Tyler points to slavery and other forms of oppression, such as the Ku Klux Klan effort to drive Black farmers off their farms and discriminatory government loan policies from the U.S. Department of Agriculture. Today, African Americans make up only 1.3 percent of the overall farming population: that’s just 45,500 Black farmers, according to the census of agriculture, down from a peak of more than 925,000 in 1920.

Some Black farmers and gardeners are re-visioning their community’s relationship to land and farming. They’re using agriculture “to resist oppression” by focusing on food sovereignty and dismantling food deserts. “People are understanding that to liberate ourselves we have to be more independent, more self-reliant,” she said. “And we can’t have self-determination if we don’t grow our own food.”

For these farmers, Soil Generation offers community and strength. “We can’t just isolate ourselves on farms and grow food, we have to build relationships and find our voice,” Tyler said.

Land is also meaningful to refugees who arrive in Philadelphia traumatized by war. “Transforming tiny row home stoops and backyards into food jungles has been a story of Southeast Asian resettlement and resilience,” wrote Lan Dinh, the Farm and Food Sovereignty Director for VietLead, in a guest column on Grid Philadelphia.

Dinh, whose group is a member of Soil Generation, told Civil Eats that gardening and farming have “unique historical and cultural relevancy” to the Southeast Asian community.

Land is both political and personal to Vietnamese people, said Dinh. Since much of their culture is agrarian, “when folks are displaced and resettled, they recreate a new sense of security and roots by taking care of the land around them,” she added. 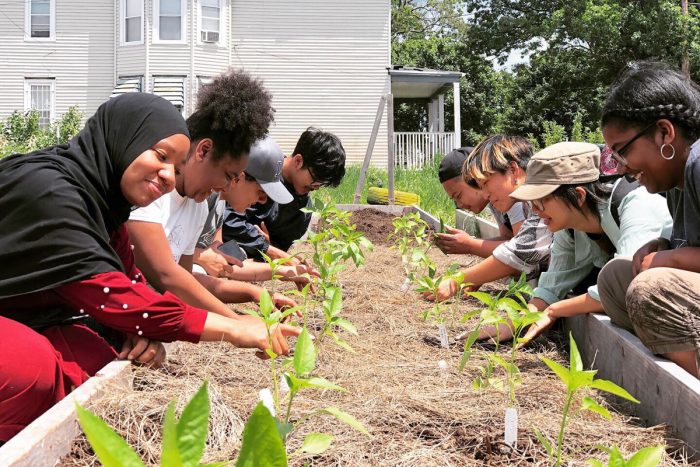 Sharing homegrown food allows them to pass on their culture to the next generation. And by growing plants, “we reflect on how we grow the world and society that we want to see,” said Dinh. Hence, the importance of access to land.

To flesh out those ties, VietLead hosts an annual program that brings youth and elders together to talk about the cultural impacts of food and gardening. The group also runs an intergenerational garden at a Philadelphia high school.

Soil Generation’s campaign is especially poignant to refugees who are displaced by war or have experienced colonization, both of which are tied to land access. And since refugees often feel powerless as newcomers in the U.S., being part of a coalition offers a connection to a greater movement in Philadelphia. “Soil Generations allows them to connect with others and shows them that what they do for fun or for survival is a bigger movement,” Dinh said. “That’s really powerful.”

Toward a People’s Agroecology

To better foster this movement, Soil Generation is working to create an Agroecology Center in Philadelphia and will publish an urban agroecology manual later this year, designed by community members, leaders, and activists. Agroecology, a concept popular in developing nations, centers on both sustainable agriculture, as well as the off-the-farm social, political, and cultural movements for changes. The term is often used by small, indigenous farmers, who are reclaiming traditional techniques. As such, gardening and farming are used as culturally reviving, politically catalyzing experiences, said Baxter, the Soil Generation organizer.

In the U.S. context, it’s especially relevant to people of color. “We claim it as a term because it’s an international movement of landless people,” Baxter said. “It’s about farmers reclaiming their food ways and being able to feed themselves. The land, it’s our right as people who live on this planet.”

This article was updated to reflect the fact that descendants of formerly enslaved people migrated to Philadelphia in the 1940s.