Community Roots engages students in place-based learning about land and relationships, as well as food, consumer culture, and social activism.

By Jennifer D. Adams and Pieranna Pieroni, The Conversation 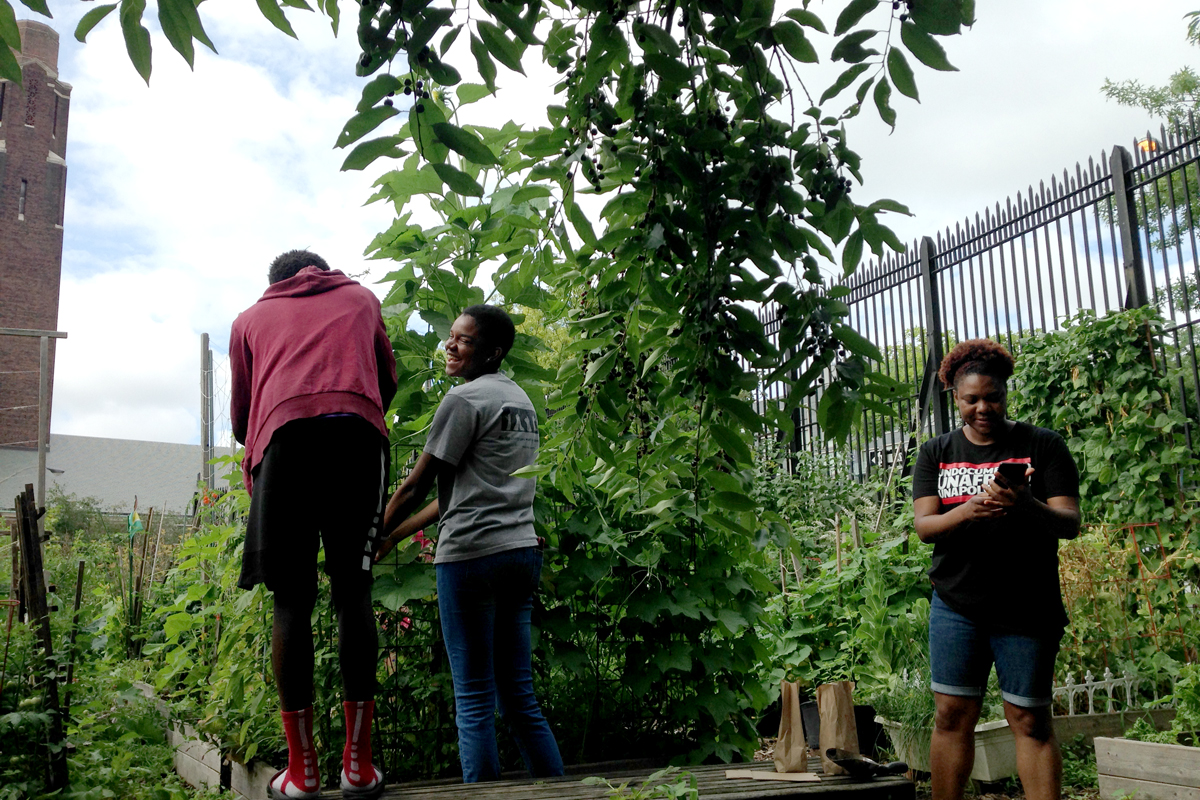 Iris, a high school student in New York City, took a course aimed at preparing public school students for college. As part of the course, she visited the Park Slope Food Coop, among the oldest member-owned businesses in the United States. Members work monthly shifts in return for access to affordable, ethically sourced food and goods. Students enrolled in the course—called Community Roots—investigated the larger social, political, and historical issues of food and place while gardening and learning about food-related activities.

When Iris told her family of her experience, “They said, ‘That’s white people’s food!’” she recalled. Iris’s family had emigrated from the Caribbean island of St. Vincent and had not yet heard of the food co-op. They also understood, through their lived experiences, that racism and white privilege shape what foods are available to people. 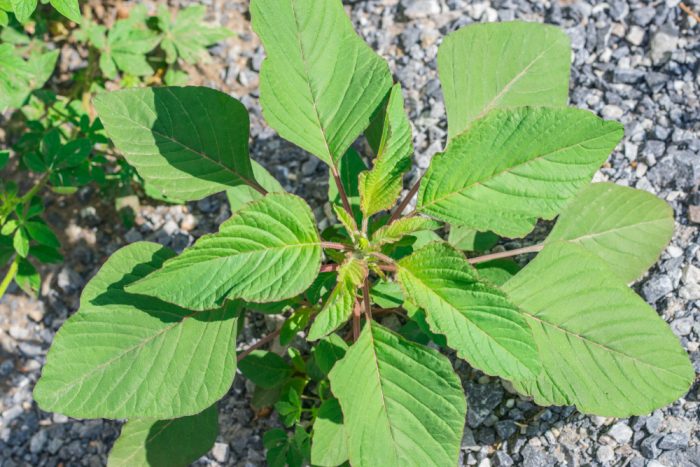 Callaloo, a kind of amaranth used in Caribbean cuisine, is among the greens Community Roots students have grown.

Iris joined the co-op, attracted by its alternative consumer model. Through her membership, Iris and her family had access to reasonably priced staples and familiar and healthy foods. Joining the co-op was one of a series of actions Iris took towards becoming an outspoken advocate for women’s and immigrants’ issues.

A Course Grows in Brooklyn 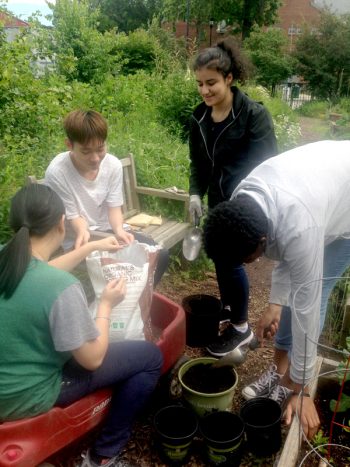 Community Roots is about connecting ecology and justice. The course is part of College Now, a free college transition program that is a partnership between the City University of New York and the New York City Department of Education. Jennifer, one of this story’s authors, mentors Pieranna, the other author and the director of College Now at Brooklyn College.

Community Roots uses the entire city as a classroom. It sees place-based learning as essential to teaching and learning. Urban gardening serves as a departure point for learning about land and relationships, as well as food, consumer culture, and social activism.

The food justice emphasis of Community Roots emerged from an actual experience of conflict between a university and a community garden. Pieranna was a member of the thriving community garden that was located on the periphery of the campus where she was working. She invited local high school students who were enrolled in College Now courses during the year to participate in unstructured gardening in the summer.

As student interest grew, Pieranna formalized the activity as a service-learning course, and thus the number of gardening students grew. A turning point in the evolution of the course came when the college’s decision to raze the garden to expand a parking lot was met by resistance from gardeners and community greening advocates. As issues of sustainability were becoming more prominent in public dialogues around the city, the irony of a city college destroying a community garden to expand a parking lot captured attention.

Ultimately, the garden was razed and reinstituted as a smaller college garden on a strip of land bordering the enlarged parking lot. For several years, Community Roots had no access to the new garden. However, lessons learned about power and displacement related to histories of colonization and gentrification helped re-direct the course.

Luckily, New York City has a thriving network of community gardens and school gardens. The course accessed other urban gardens and grassroots food-related organizations such as the Park Slope Food Coop, where both Pieranna and Jennifer are members.

Raven, a student who grew up in Coney Island, recalls a reading in Community Roots class from Brazilian educator and theorist Paulo Freire’s book Pedagogy of the Oppressed. Freire introduced an approach called problem-posing: teachers and students teach and learn together. Their major subjects of inquiry include themselves, each other and the ideas and issues that shape their realities and relationships. 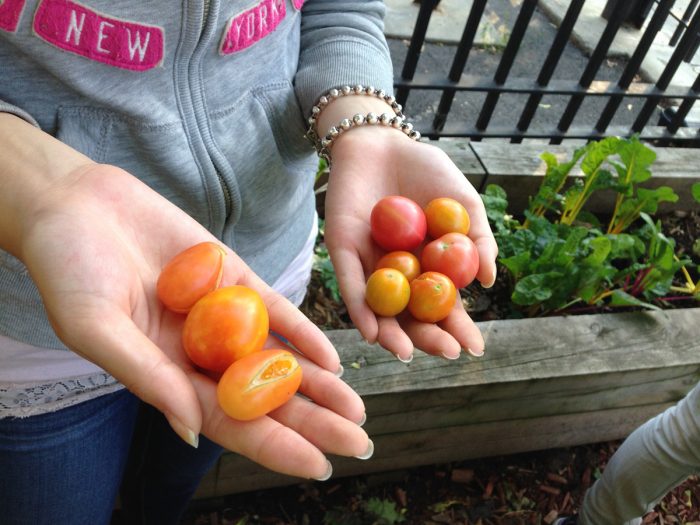 Harvesting tomatoes and chard in one of the gardens. (Photo by Pieranna Pieroni)

Pedgagogy of the Oppressed led Raven to reflect on what she experienced in high school—what Freire calls the banking model of education, a one-way learning style whereby the teacher deposits knowledge in the student’s mind. Raven captioned a cartoon she created about her earlier high school learning:

Community Roots digs into theorists like Freire and other traditions of liberatory pedagogy. Thus the course centres on students’ lived experiences and allows for the development of critical consciousness.

Raven contrasted her high-school experience to the newer critically engaged style of learning. She returned to Community Roots as an undergraduate program mentor where she adeptly engaged her near-peers in land-based education.

Raven took the class on walking tours of her neighbourhood to explore how it was rebuilt in the Coney Island area in the aftermath of the 2012 Hurricane Sandy: The boardwalk and tourist attractions were renovated and developers who already had their sights on the area redoubled their efforts in a neighborhood long in need of investment. In contrast, small businesses, community gardens, and other amenities frequented by locals were lost. New luxury towers, higher rents, and upscale businesses are pressing out long-term residents like Raven’s family.

Raven is now majoring in sustainability, working as a school hydroponics farm manager and is committed to helping communities like hers build resilience that works for everyone. 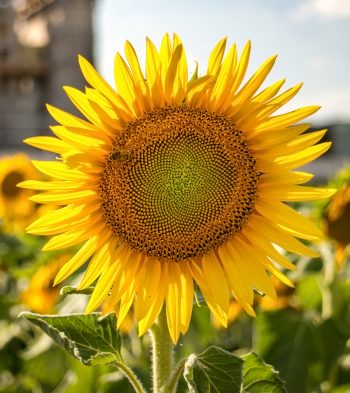 Sunflower, one of many flowers grown in Community Roots gardens.

Community Roots attracts many students like Iris and Raven: immigrants, children of immigrants and first-generation college students. Each student brings to the class deep, rich experiences of food, of places that are important to them, and their own relationships to these things. Learning starts in the garden and branches out into related themes and different parts of the city. When students make connections through critical thinking and relationships, their capacities to lead in their families and communities is strengthened.

The names Iris and Raven are pseudonyms chosen by the students for confidentiality.

Top photo: Sunflowers and luffa vines—related to cucumber, gourd and squash—are tended by a Community Roots participant and mentor in a Brooklyn school community garden with their instructor (right). (Photo by Pieranna Pieroni)

Jennifer D. Adams is the Canada Research Chair of Creativity and STEM and an associate professor at University of Calgary Read more >

Pieranna Pieroni is a Ph. D. student at The Graduate Center of the City University of New York. Read more >