Residents in a rural Puerto Rican community are reviving a historic botanical garden to serve as an example of local and sustainable farming. 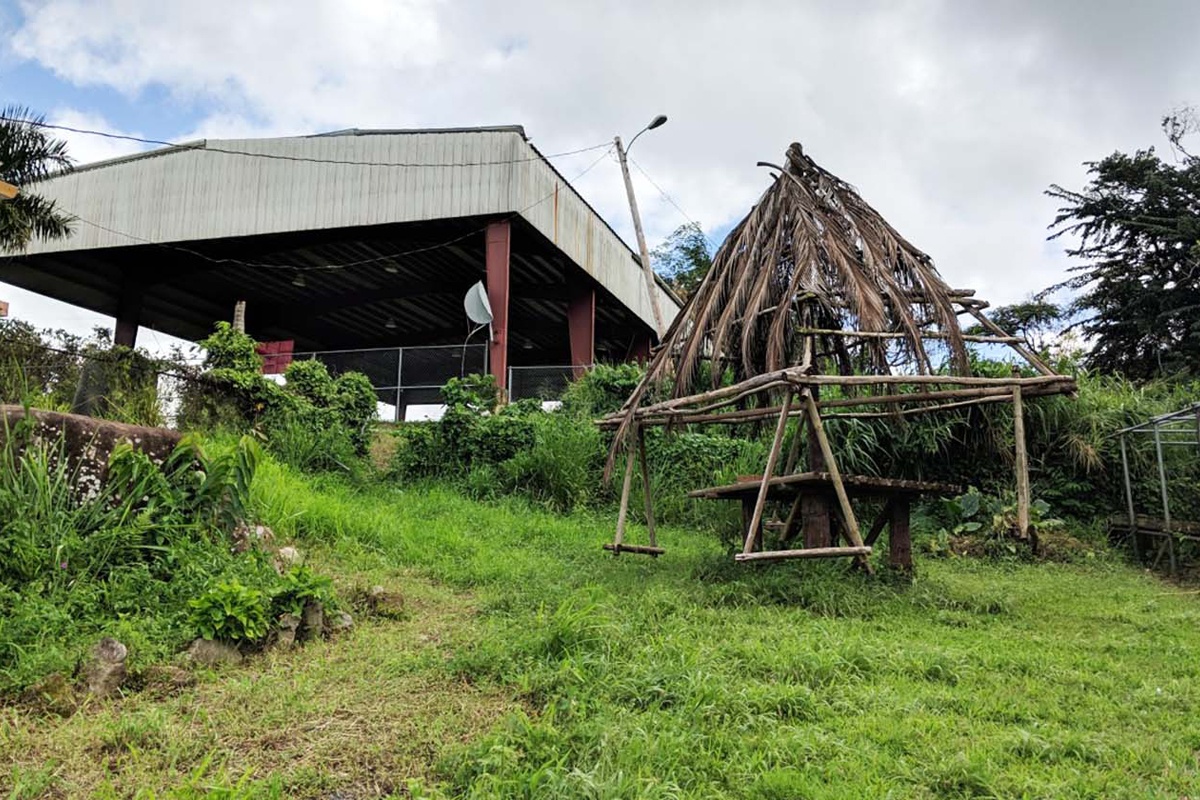 In the shadow of Monte Pirucho, once a place of worship for the Taino tribe, Tara Rodríguez Besosa pulls a long, spiny plant from the bed of a small community garden and begins plucking its leaves.

Called “la ruda” (rue), the plant, which releases a strong herbaceous scent, has a storied history as part of birth control trials once covertly conducted in Puerto Rico by mainland medical researchers. But the indigenous herb’s powers had originally been used for good.

“That’s what we call a hot plant,” says Carmen Veguilla, a local farmer who runs the community garden. “It can be used effectively for things like anxiety, menstrual cramps or to ward off bad spirits, but you have to respect and understand its purpose.”

Veguilla and other residents of San Salvador, a small agrarian community 30 miles south of San Juan, grow la ruda and other plants and medicinal herbs endemic to the Caribbean island. They are the centerpiece of El Jardin Ecológico del San Salvador, a community garden rejuvenated after Hurricane Maria, and serving as an example of local and sustainable farming.

El Jardin Ecológico sits behind an abandoned church and alongside the Rio Grande de La Loiza. Though it has existed many years—residents can’t recall its exact founding—it’s taken on new significance as a model for how small farmers across the island can reclaim their agricultural heritage. 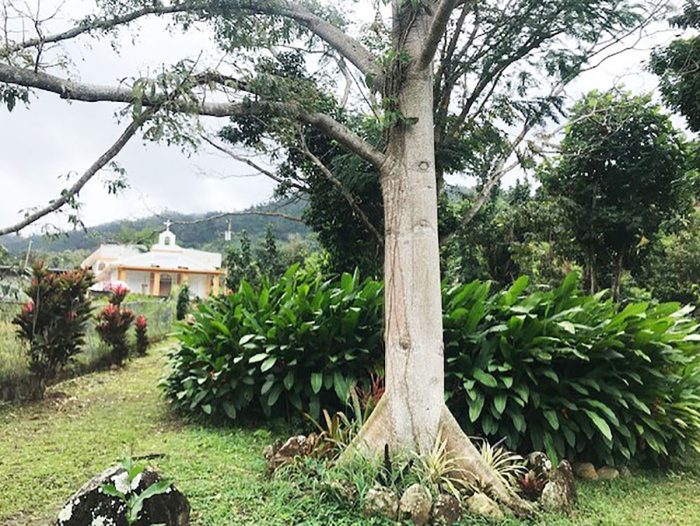 As a symbol of Puerto Rico’s past and a vision for the island’s future, the community garden sits next to an old church at the foot of one of the most important mountains in the Taino culture. Photo by Carly Graf.

Decades of economic and cultural dependence on the United States did more than reshape Puerto Rico’s agricultural-dependent economy. For example, Operation Bootstrap, which began in 1947, completely shifted Puerto Rico’s economic dependence from agriculture to manufacturing in less than 20 years.

Many people said this coerced metamorphosis from an agrarian system to an industrialized one eroded traditional cultural practices and even what it meant to be Puerto Rican.

And it revolutionized the Puerto Rican diet. Gone were fresh vegetables, tropical fruits, and native herbs once grown year-round in the island’s tropical climate. Even staple cultural items like rice and beans were no longer grown there.

As a result, Puerto Rican farm sales decreased by almost two-thirds between 1959 and 1964, according to the USDA.

“We were taught that growing food in your backyard was uncivilized,” said Rodríguez Besosa, an architect-turned activist at the center of this agricultural revival. “And we were told that having canned food made us first-class citizens.”

Fried foods and imported canned good with ingredients high in sugar, sodium, or both became, by necessity, a regular part of the local diet. Casa de Whopper (Burger King) and KFC storefronts line the streets even in rural areas, and rates of preventable conditions like obesity, diabetes, and hypertension are well over the national average, a recent study found. 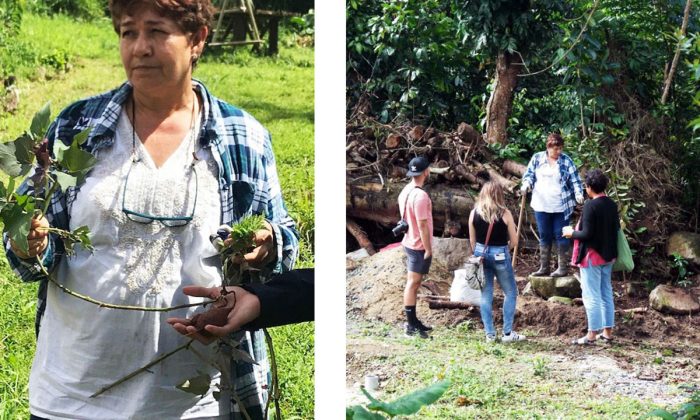 Left, Carmen Veguilla explains how the plants grown in the community garden were used by Indigenous people. Photo by Carly Graf. Right, Veguilla teaches students about the garden’s flora and fauna, and how it can be used today. Photo by Katie Rice.

Puerto Ricans are four times as likely as mainlanders to experience food insecurity, meaning they don’t have reliable access to enough healthy foods to meet basic nutrition requirements, according to Bread for the World, a nonprofit focused on reducing global hunger. About 43 percent of residents receive food stamps, according to USDA.

Before Hurricane Maria hit in 2017, a budding farm-to-table scene had started to emerge on the island. A small but burgeoning group of farmers had started advocating for their right to land and the freedom to feed themselves.

If Puerto Ricans could grow their own food, the thinking went, they could finally reclaim the island’s unique identity and move further down the path toward political self-determination.

Rodríguez Besosa became a leading voice in that effort. In 2010, she had started El Departamento de la Comida, a community-supported agriculture-style operation—and later restaurant—that served as a distribution center for small farmers looking to sell their products.

The goal was to reintroduce native produce to Puerto Ricans. “We want to eat the original Puerto Rican diet,” Rodríguez Besosa said. “But we also want to use food to create a better widespread understanding of what truly makes us all Puerto Rican.”

She was in the process of buying an 8-acre farm in San Salvador when Hurricane Maria hit in 2017. The category 5 storm destroyed an estimated 80 percent of Puerto Rico’s crops and farmland. In its wake, the farming revolution became more urgent. 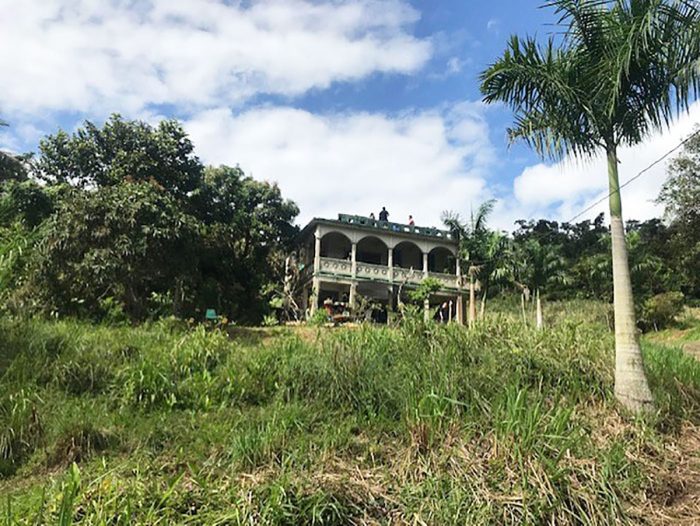 Tara Rodriguez Besosa bought an abandoned 8-acre farm and farmhouse in San Salvador across the street from the garden. Today, she hosts neighbors for home-cooked meals using produce and plants they grow locally. Photo by Carly Graf.

Maria also destroyed El Departamento de la Comida, and rather than trying to rebuild it, Rodríguez Besosa decided to focus on the island’s agricultural reconstruction.

What ensued was a media frenzy over the high-energy, rebellious activist and a natural synergy between her own plans and the existing community garden project in San Salvador.

Tucked away behind a series of winding mountain passes, San Salvador is the least populated barrio in the city of Caguas, which sits among lush green hills that once housed some of the island’s richest ecological diversity. It was also once home to thriving tribal communities, marked by the petroglyphs found on nearby rocks that have outlasted nearly all Taino people.

The tangible proof of this past has fostered a deep connection to history and its traditions among San Salvador residents, and it has informed their love and dedication to the land.

“Farming is a practice of cultural and historical preservation,” Veguilla says, explaining why residents chose to cultivate indigenous flora and fauna at the community garden, including la ruda and plants like turmeric, pineapples, and other medicinal herbs.

San Salvador is a community accustomed to getting things done on its own.

After Maria hit, 19 people lived in the shuttered elementary school classrooms; local lunch ladies fed them. That same community spirit drove the reinvestment and restoration of the botanical garden, which Veguilla says provides a way for neighbors and others interested in learning about and helping preserve local culture and tradition through its endemic species.

She and Rodríguez Besosa lead workshops at El Jardin Botanico for Puerto Rican school kids and bring volunteers, both local and visitors, to learn about farming and help maintain the garden.

And after shifts there end, neighbors will often dine together at Rodríguez Besosa’s plot across the street, with many of the ingredients coming straight from the two gardens. 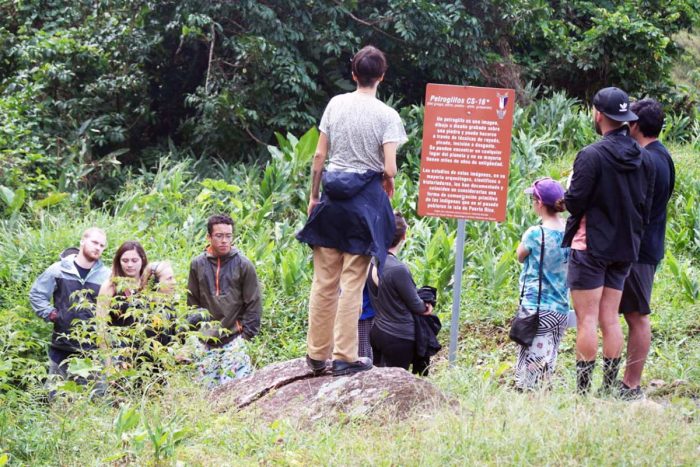 Tara Rodriguez Besosa points out petroglyphs within the community garden, proof that the Taino once lived and farmed in this very space. Photo by Katie Rice

Veguilla, for her part, grew up working the land in this community with her family and living off its bounty. But as with other impacts of U.S. policy, common agricultural practices and inherited farming tradition, like those of Veguilla’s family, are no longer commonplace.

With kind eyes and a quick smile, she moves around the farm swiftly, navigating bristly plants and yanking roots from the ground. “I read some books, but really I learned most of this through my ancestors and after watching what my grandmother and mother did for me,” she says.

On this day, as neighbors feast on root vegetable mash, eggplant stew and plantain-bean salad, there’s none of the canned stuff. The spread is a typical meal on the farm, prepared by Vero Quiles, former chef and business partner at El Departamento de la Comida.

The meal is also emblematic of what many Puerto Ricans historically ate before the food system changed to become reliant on imports. And it’s what Rodríguez Besosa and others envision tables across the island could look like should their vision of local and sustainable farming be realized.

“The water and other natural ecosystems should dictate what happens on the island, not people who have never even lived here,” she says.

Top photo: The community garden pays tribute to Puerto Rico’s history beyond just flora and fauna. The community built a “Taino swing set” for the neighborhood children, modeled after the structures believed to have been built by the Tainos and used for recreation. Photo by Katie Rice.