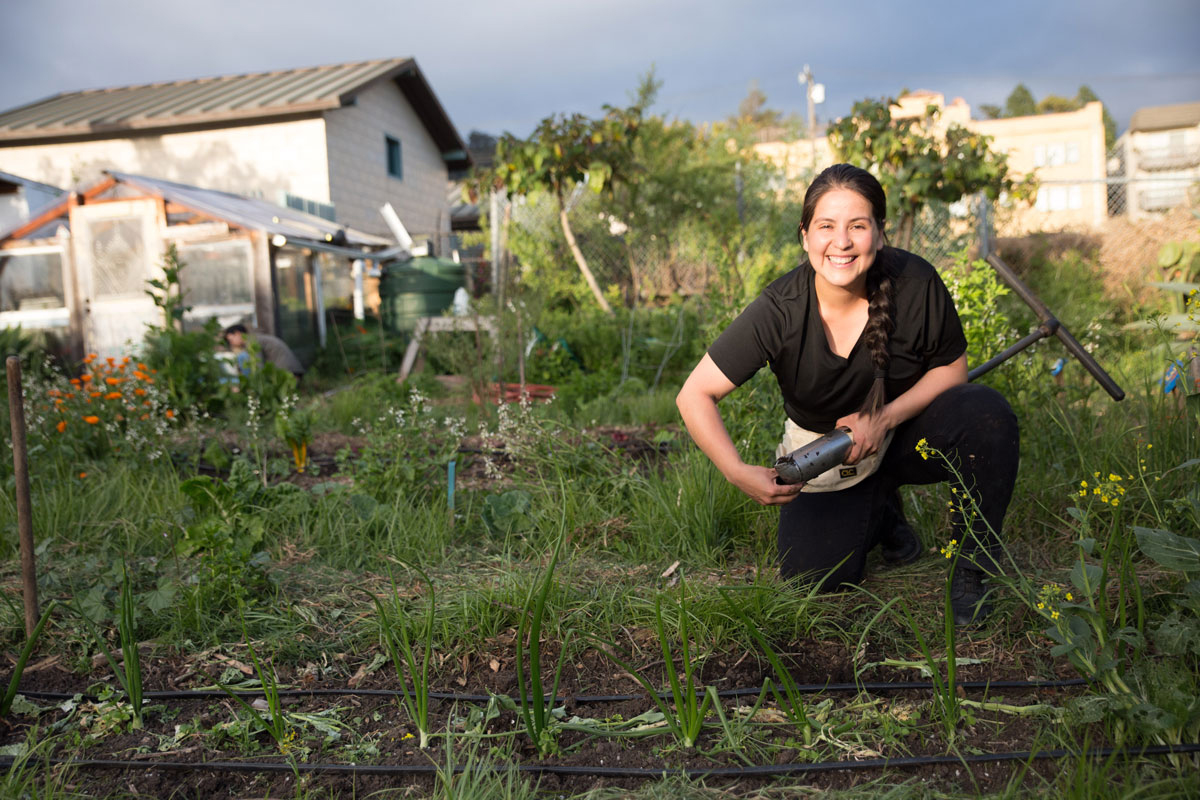 From above, the crops of California’s Central Valley look like a giant tile floor. Some of the tiles are fuzzy; these are the densely planted almond and mandarin groves that dominate large swaths of the Valley. Others are striped; these are rows of grapes growing on long trellises. They stretch for 450 miles across the heart of California, many belonging to industrial farm operators that net millions of dollars a year in profits.

What a satellite image won’t show you are the complicated social and political frameworks that govern the Central Valley. For every wealthy landowner, there are thousands of workers, many undocumented, laboring in the fields. The inequalities are glaring: The Valley is home to some of the most impoverished cities in the country. Many residents, surrounded by agricultural bounty, live in food deserts.

When Aidee Guzman, a researcher and Ph.D. candidate at the University of California, Berkeley’s Department of Environmental Science, Policy, and Management, shows me these satellite images, she sees something else entirely. She zooms in past the hodgepodge of tiles and focuses on one of the small plots of land she’s been researching.

LaCha Her, for example, a Hmong refugee who resettled in the Valley decades ago, has a 25-acre farm—minuscule by the standards of Fresno County, where the average farm is 345 acres and many are over 1,000 acres. Despite its small size, Her’s farm grows an abundance of produce, upwards of 70 crops a year, including specialty items like ginger, lemongrass, water spinach, asparagus, taro, mint, and broccoli, a diversity that is rare in the Valley.

Guzman is focusing on these small farms to find out whether, ecologically, this diversity has any positive effects on soil health. Her work won’t be published for another two years, but there is already a large body of research that explains how large monocropping operations strip soils of their nutrients and make them less capable of storing carbon, which contributes to global warming once the carbon is released in the air. As she works, she is documenting a potential alternative to the industrial mega-farms of the Valley and the West.

Guzman talks fast, her vocabulary punctuated by the occasional curse word. Twenty-six years old, she was born and raised in the Central Valley. Her parents migrated from El Pedregal, a small town in central Mexico where agriculture is a way of life, even as extreme poverty has forced many to leave. They worked seasonal jobs, her father pin-balling between Washington, California, and Florida and switching between fields of cantaloupe and apple orchards; her mother picking lettuce and packaging tomatoes. The Central Valley’s acres upon acres of almonds and grapes were the backdrop to Guzman’s youth, and Firebaugh, her hometown, has been referenced in studies about the poverty and pollution that plague the area.

Many of the region’s inequalities can be traced to the effects industrial agriculture has had on the environment. Industrial dairies, truck emissions and the intensive use of fertilizers help explain why counties here consistently rank as the worst in the state for air pollution. Yet through her research, Guzman hopes to tell a different story about the place she calls home. In these fields, in a valley that is often painted as a forgotten place by outsiders, Guzman finds seeds of resilience among the immigrant communities. Guzman sees the Central Valley as home to a thriving oasis of diversity, where culturally relevant food grows and gives jobs to people in an area where unemployment is high. What Guzman is trying to prove now is that these farming ventures are important environmentally, too.

“I have to convince Berkeley folks that Fresno matters,” Guzman tells me at a local restaurant, between bites of quesadillas stuffed with squash blossoms and huitlacoche, a black fungus that grows on corn. “Even my advisor was surprised I wanted to work there,” she said. Typically, students will flock to work at organic farms in Sacramento or Napa Valley. But Guzman has grown used to having to advocate for her childhood home, bridging the divide between the sustainable agriculture movement and the Central Valley, or what she calls “the Valley of the Beast.”

Through such research, Guzman and other social-ecologists are helping to expand the definition of agroecology, or the application of ecological principles to farming. Elsewhere in the world, for groups like La Via Campesina—described as “the international peasant’s voice”—agroecology has come to embody a social movement invested in helping peasant farmers challenge the social impacts of Big Ag. But in the United States, it is mostly confined to academia, and thought of solely in terms of its benefits to the environment—rather than people. Researchers are more likely to equate it to “white hippy dippy” farmers, as Guzman jokingly calls them, instead of marginalized groups facing agricultural inequalities.

Given this blind spot, in 2016 Guzman designed a research project with Fresno-based small farm advisor Ruth Dahlquist-Willard, from the University of California cooperative extension program. Guzman surveyed 30 small-scale farms run by refugee and immigrant farmers like Her, and took over 400 soil samples. She hopes to determine whether the soils and beneficial organisms that live there, known as arbuscular mycorrhizal fungi, are healthier in these highly diversified cropping systems.

She is also looking at pollinator numbers to see how they vary between small-scale diversified systems and monoculture farms. Preliminary results indicate that the smaller and diversified farms are attracting a greater number of native pollinators, an important factor in a region where monocultures and pesticide sprays have been detrimental to bee populations.

Highly diversified farms make up a small percent of the acreage in the Valley, and some people might argue that this makes their impact negligible. “But I disagree,” Guzman told me. “Sustainable farming practices are happening in the Valley, and if these farmers are actually providing (soil health benefits) then, shouldn’t we think about them more? And support them?”

Fresno and Tulare counties together had approximately 8,000 small-scale farms, according to the 2012 agriculture census. Many of these are operated by immigrants or refugees, said Dahlquist-Willard, who focuses on the two counties. While the census numbers can be unreliable (“farmers don’t like to fill out paperwork,” Dahlquist-Willard says), a 2007 survey found approximately 900 Hmong farmers in Fresno County. As for the Latino farmers—many of whom started out as farmworkers—Dahlquist-Willard has noticed that they are entering farm ownership at a younger age than white farmers, creating “the next generation of family farms.”

One of those farmers is Isais Hernandez, a portly middle-aged man whose white chin stubble contrasts with his tan skin. On his 33-acre parcel, Hernandez grows Japanese, Chinese, Italian, and Thai varieties of eggplant, as well as other fruits and vegetables. Originally from Michoacán, Mexico, he started out working alongside his parents on a farm that was run by Japanese farmers. “I never worked for gringos,” he told me with a chuckle. After years of saving their earnings, he and some family members were able to buy their own property. Later, he purchased this parcel of land, too.

Last summer, Guzman visited Hernandez to look at his farm’s soil health. Hernandez didn’t really know too much about the research Guzman was conducting, but he offered insight into why her work is so important here. Gesturing to the farms around him, he expressed frustration over ag subsidies and how they are distributed. “The programs seem to benefit the big companies more than the small farms like us,” he said.

This is true for a few reasons. First, resources for offices like the Cooperative Extension program where Dahlquist-Willard works are limited, so their ability to reach and disseminate information to farmers like Hernandez is constrained. But there is another structural inequality at play: Whenever government resources are up for grabs, they typically go to those who are more plugged in to the system. Other groups can take advantage of the funds simply because they have more resources. Researching these marginalized growers is one way to change that. Not only does that bridge connections between academics and farmers, but it can inform new regulations that might otherwise disproportionately hurt them.

Take, for example, the Irrigated Lands Regulatory Program. The program was created in 2003 with a mission to hold agricultural producers in California accountable for the water contamination typically caused by Big Ag. New reporting requirements ask farmers to fill out paperwork that lists fertilizer inputs and the crops they grow annually, a difficult data point for farmers who grow between 50 and 70 crops over multiple seasons per year, and who don’t have the time, administrative help, or, in some cases, writing skills to fill out the requests.

Guzman’s research could help these farmers by bringing visibility to their small-scale operations before state agencies create new, more onerous rules, Dahlquist-Willard said. “Whatever [regulations] agencies are making, if they don’t know these people are here, they aren’t going to consider them in that decision.” For Guzman, this type of dilemma gets to the true heart of “agroecology,” where, despite the social and political forces that shape these farmers’ lives, they are able to occupy space. “Them existing and surviving in a landscape like this,” she said, “that’s resistance.”

This story was originally published at High Country News on May 20, 2019, and is reprinted with permission.