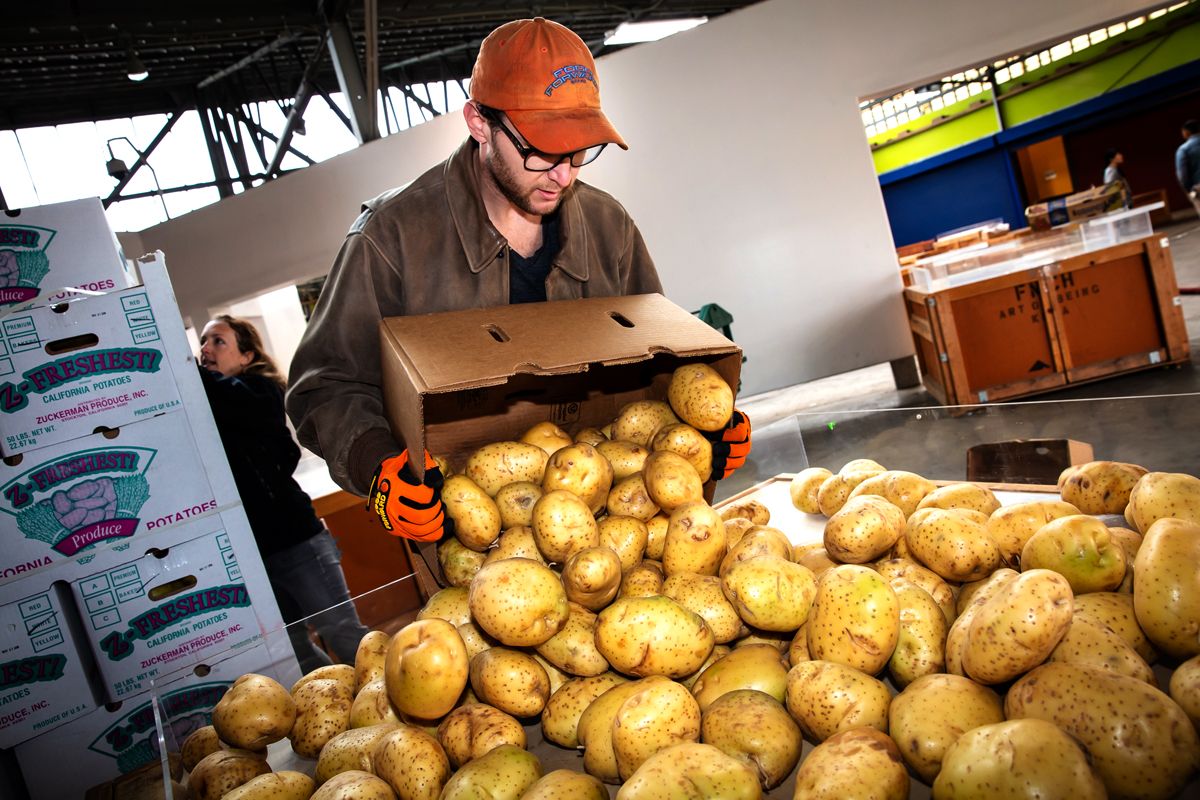 Rick Nahmias was walking his dog through his neighborhood in California’s San Fernando Valley a decade ago when he had a revelation: An appalling amount of food in Los Angeles was going to waste. Fruit was ripening and then rotting in backyards, and retailers were chucking out perfectly good produce because it may have had a blemish or two.

Alarmed by the food wasted in his community, Nahmias—a writer, filmmaker, and photographer—hatched a plan. He founded a food rescue organization called Food Forward in 2009 that works to combat food waste by salvaging fruits and vegetables from backyards, orchards, farmers’ markets, and wholesalers before they perish and donating them to hunger-relief agencies in eight Southern California counties.

Two years after Food Forward’s launch, the nonprofit grew so popular that it was inundated with produce. In December 2010, it purchased its first “Fruitmobile,” a cargo van, to help with its rescue efforts, and it later added a “Glean Machine,” a stakebed truck. Even with its growing fleet, Food Forward couldn’t always accommodate the literal tons of produce in need of rescuing.

“We had expected to recover a few million pounds of produce,” Nahmias recalled of those early days. “But we ended up with 10, 15 million pounds, and we didn’t have refrigeration.”

The lack of refrigeration meant that Food Forward had to donate all rescued produce within roughly 24 hours, a feat that sometimes proved impossible. The organization found itself turning away fruits and vegetables on occasion for fear that they would perish before delivery.

Today, Food Forward no longer has this problem. The Produce Pit Stop, its new 6,000-square-foot warehouse space in the city of Bell in southeastern Los Angeles, allows it to store up to 200,000 pounds of food at any one time. The facility, which opened last week, marks a sea change for Food Forward. To date, the organization has rescued more than 77 million pounds of produce from across Southern California. But with the Produce Pit Stop, funded largely by a $500,000 grant from CalRecycle’s Food Waste Prevention and Rescue Grant Program, it expects to save 50 percent more produce than it did previously—recovering about 33 million pounds annually by 2020. 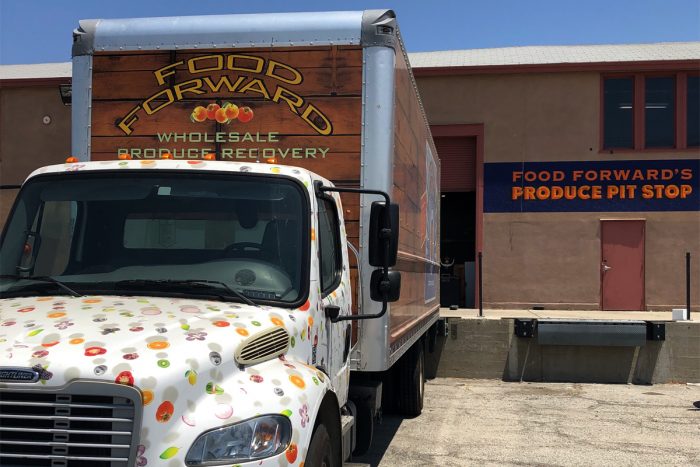 Food-recovery advocates hope that the Produce Pit Stop will inspire food rescue efforts across the state and the nation as a way to not only get produce to the needy but also to reduce the greenhouse gases generated by organic waste. Americans throw away about half of the nation’s produce—an estimated 60 million tons of fruits and vegetables—each year. And in California, nearly 6 million tons of food is discarded annually. Since an estimated 18 percent of that food ends up in landfills, the state has passed legislation that requires businesses to reduce their organic waste.

Reducing organic waste also helps the state achieve its ambitious greenhouse gas reduction goals, as roughly a third of the 30 million tons of garbage that Californians send to landfills each year are compostable organic materials, such as produce.

The Produce Pit Stop stands out as one of Southern California’s only food recovery spaces and one of the few facilities in the nation to operate on such a massive scale. Texas is home to FoodSource DFW, which since 2013 has rescued more than 7.7 million pounds of food from states in the Southwest. In comparison, Food Forward has salvaged 77.4 million pounds of food during its 10-year history.

“There’s nothing else like [the Produce Pit Stop] in the region,” Food Forward CEO Rick Nahmias told Civil Eats. “It will help us to increase the volume of produce we recover. We’re really excited about the launch and really looking forward to helping people get healthy.”

Struggling to Handle a Surplus of Food

Food Forward’s undertakings have grown exponentially since Nahmias first launched the food recovery organization a decade ago. He’d simply wanted to prevent more food from going to waste in the Los Angeles area, given that 1 in 8 Californians are food insecure. During its first-ever food rescue, Food Forward recovered 800 pounds of fruit from a backyard with the help of just two volunteers—today, the organization has more than 7,000 volunteers.

The Produce Pit Stop puts an end to the days when Food Forward had to refuse donations of produce or store food in places such as church parking lots, where it wasn’t secure. The idea for the warehouse arose after the nonprofit conducted an independent feasibility study to see how it could better address its surplus food problem.

“We learned from the study that we were going to need a cross-docking facility, so we took a deep breath and applied for a grant from CalRecycle for high-impact food recovery,” Nahmias said, which makes sense, “purely from an environmental perspective, because food waste is [one of] the highest contributors of greenhouse gases.” 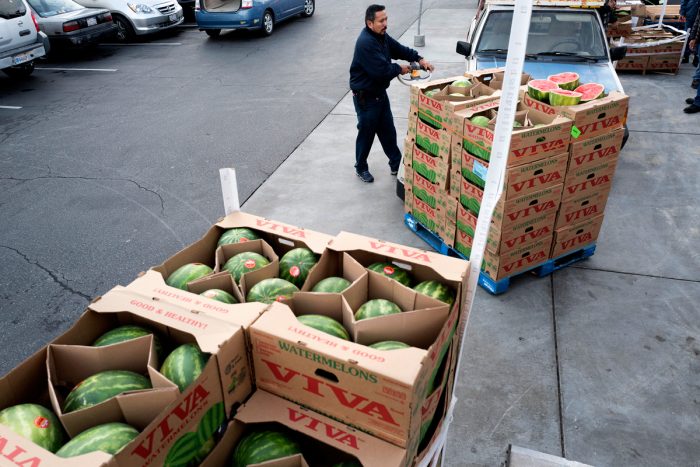 Food Forward also fundraised to secure Pit Stop’s warehouse, formerly an aircraft storage space built in the 1920s. Much of the fruit and vegetables Food Forward recovers falls into the “ugly produce” category—perfectly fine, but not aesthetically pleasing enough for retailers to sell to customers expecting shiny, spot-free, and well-shaped produce.

Luis Yepiz, Food Forward’s wholesale recovery program manager, says the organization routinely receives hundreds of varieties of produce—from Asian jackfruit to South African pineapples—that have been rejected by supermarkets and restaurants. Food Forward works with wholesalers to rescue that food and give it a second chance.

“We dispatch drivers to receiving agencies—food banks, church pantries, whoever gives away food for free,” Yepiz said. “We distribute produce across Southern California. We fill a truck. We take it to the agency and drop it off.”

The Produce Pit Stop, complete with loading docks, allows Food Forward to streamline its collection and drop-off process. It reduces the number of trips drivers have to make and gives them time to collect an array of food. Yepiz describes the new warehouse as his “dream.” 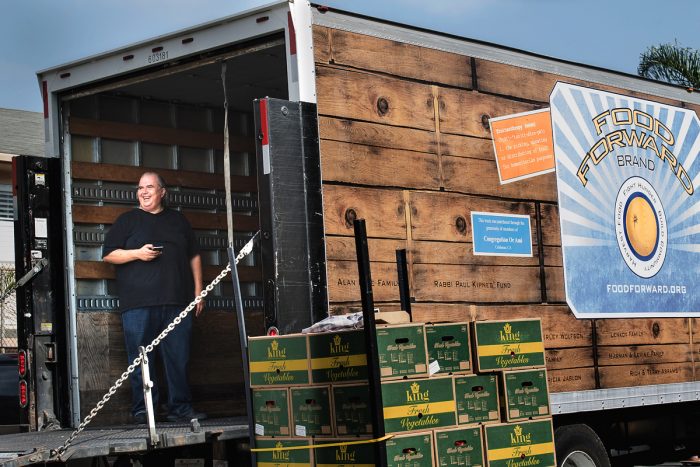 “We’re definitely going to reach a lot more people,” he said. “Small pantries can have access to our food. They can come to us and know they’re going to get a variety, since they can only use so many potatoes or onions or watermelons.”

Food Forward’s efforts to rescue food highlight another food-related problem in the Golden State—food insecurity. California Food Policy Advocates estimate that 4.7 million adults and 2 million children live in food-insecure households, or in homes where the inhabitants do not have regular access to healthful foods.

Although the low-income communities where people face barriers to accessing healthful food have been called food deserts (a much-disputed term among food-access experts), Nahmias said the term “food swamp” is more appropriate.

“They’ve got an overabundance of junk food and fast food and liquor stores, and they do not have access to healthy produce,” he explained.

Neighborhoods in south Los Angeles and east Los Angeles disproportionately fall into the “food swamp” category, Nahmias said. He noted that schools in such areas, like Morningside High School in Inglewood and Fremont High School in Watts, give out boxes full of produce to community members to increase their access to healthful foods. And Yepiz pointed out that corner stores now stock very limited quantities of produce, such as apples, bananas, and oranges, but far too little to meet the nutritional needs of residents. In quasi-industrial parts of the Los Angeles County, like Compton or Bell, home of the Produce Pit Stop, accessing fruits and vegetables is even more challenging.

“The Produce Pit Stop is much-needed infrastructure for food recovery,” she said. “Being able to store the produce will extend the shelf life of the food they get, and I think it will make a difference in meeting the needs of food-insecure families looking for extra support.” 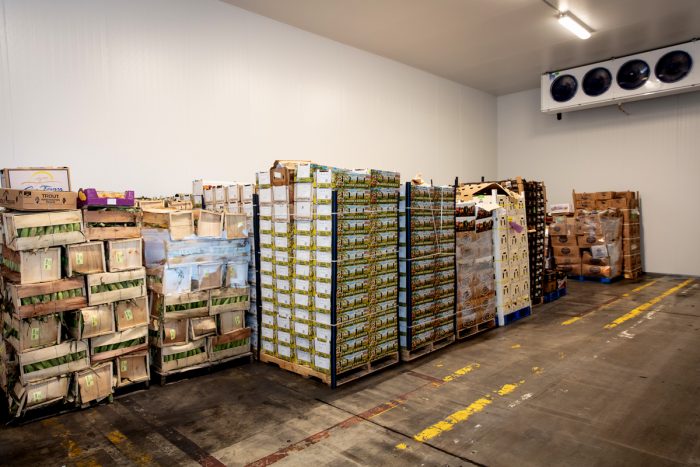 Fox said it’s also important for the public to understand how food insecurity overlaps with other social problems.

“Awareness is really key,” she said. “The core issues of food insecurity are essentially poverty and hunger. We have to be concerned about the cost of housing and the issue of homeless displacement. All of those issues impact people’s ability to be well-nourished—where there’s housing insecurity, there’s food insecurity.”

Curbing Food Waste is Good for the Environment

When organic waste decomposes, it releases methane gas, which CalRecycle spokesman Lance Klug refers to as “one of the worst super-pollutants out there.” It is a greenhouse gas with a global warming potential 25 times higher than carbon dioxide, according to CalRecycle. By next year, California aims to reduce all waste, organic and otherwise, sent to landfills by 75 percent. To that end, CalRecycle in 2018 awarded grants to 34 recipients, including Food Forward, working to eliminate food waste.

Food waste, however, doesn’t just harm the environment because of how it breaks down. “Think about all of the water and energy that went into transporting that food. Instead of contributing to climate change, Food Forward is making sure edible food gets to Californians who need it,” Klug said.

He credits the nonprofit with making the state healthier and says that his agency hopes Food Forward will inspire similar efforts across California, if not the country. “Think about the benefits for communities—not just feeding people and helping the planet but also adding local jobs.”

Klug said that California has already set national trends with its ambitious climate policies, and Food Forward’s food waste prevention efforts are part of that movement. He calls it a tragedy that so much food in the state goes to waste as Californians go hungry.

Luis Yepiz agrees. “We’re dealing with a humanitarian crisis,” he said. “The communities that we serve have been in a cycle of hopelessness, but we break that cycle by voicing our concerns and doing what we’re able to with what we’ve got.”