Toxic Red Tide is Back in Florida. Is Big Sugar to Blame?

The rise of toxic algae blooms in the Gulf of Mexico is pitting tourism against agriculture as the state looks for solutions. 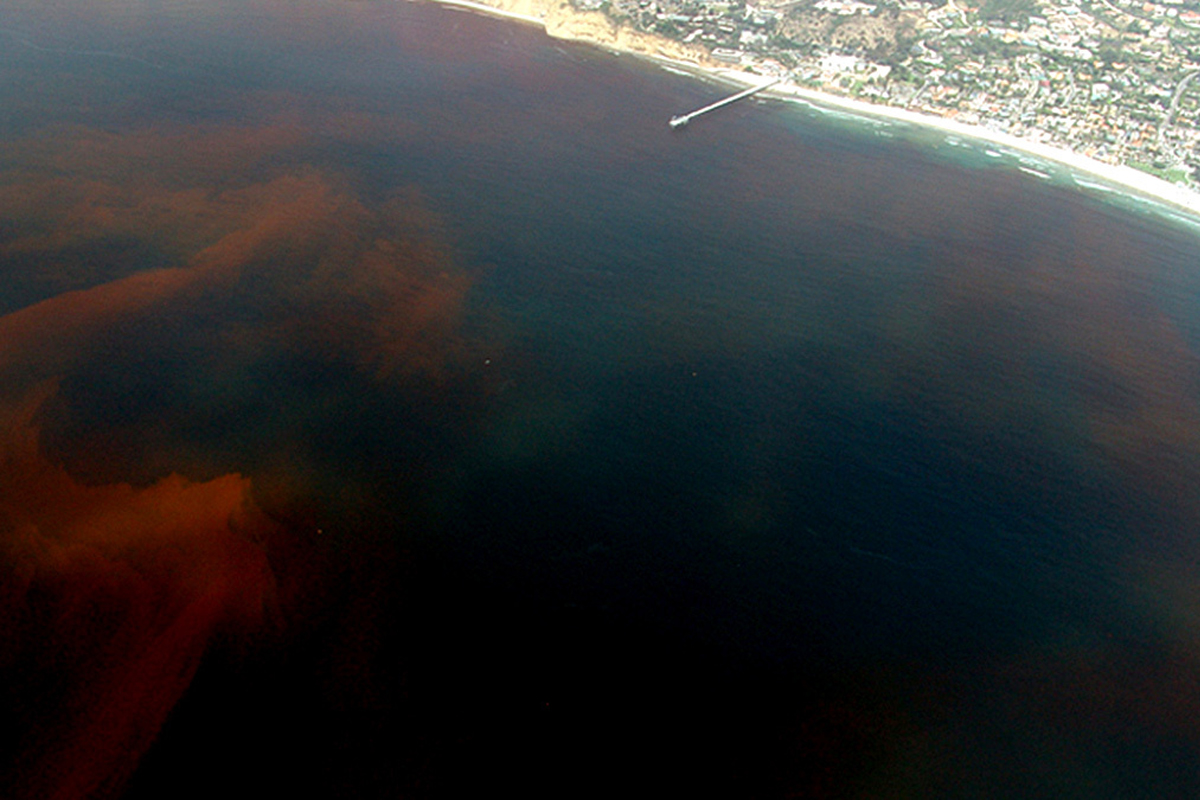 As Florida’s coastal waters start to warm up for the summer, red tide (Karenia brevis) has already been detected on several of the state’s Gulf beaches.

In 2018, the toxic algae colored the water a dull, rusty red and wreaked havoc on the state. The stench was sickening and people were affected by aerosol particles of the algae itself, causing respiratory irritation. By August, hundreds of dead fish littered the state’s popular beaches.

Fixing the toxic problem is a high priority, and there’s a rush to find answers—the state is moving to commit $3 million a year to red tide research. And while advocates and scientists say there is a clear link to fertilizer runoff from sugar plantations and livestock operations, preventative solutions taking agriculture into account may still be far off. In the meantime, the issue is pitting tourism, one of the state’s major sources of income, against the sugar and agriculture industries.

Although red tide has long been seen as a natural occurrence, some see human activity as exacerbating the recent extensive blooms.

“If a farmer fertilizes a cornfield in Minnesota, it ends up in the Gulf,” said Jack Davis, professor of environmental history at the University of Florida and author of The Gulf: The Making of an American Sea, a monumental study of the body of water and its importance to U.S. history and economy.

Davis describes the Gulf as “one of the richest estuarine environments in the world, with five major states directly benefitting from its resources.” Two-thirds of all U.S. rivers drain into the Gulf, bringing runoff from both urban and agricultural areas. This huge annual nutrient dump—containing nitrogen and phosphorous—has created an enormous dead zone at the mouth of the Mississippi River.

In Florida, he added, “much [of the runoff] comes from the agriculture around Lake Okeechobee.”

Water in Okeechobee usually stays contained, but to prevent flooding, several times a year the U.S. Army Corps of Engineers releases water from the lake into local rivers that lead west to the Gulf, or east to the Indian River Lagoon. 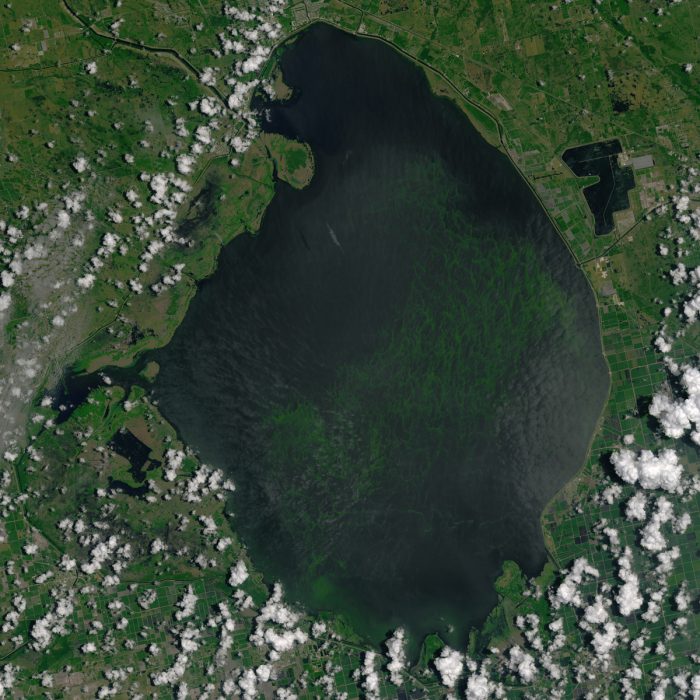 A 2016 blue-green algae bloom in Lake Okeechobee. (Photo by Joshua Stevens for the NASA Earth Observatory)

Davis points to the fact that algae blooms have been on the rise everywhere, in both fresh and saltwater—from Chesapeake Bay to Lake Erie and the Pacific Coast. Since some red tide occurs naturally most years, Davis worries that just calling recent extreme blooms off the Florida coast red tide—rather than algae blooms—runs the risk of “letting humans off the hook.”

But while Davis is adamant about the human impact on red tide, scientists remain cautious, and some are unsure why this latest bloom was so severe.

At Mote Marine Laboratory in Sarasota, red tide expert Cynthia Heil heads the department researching the algae. “In the case of Lake Okeechobee, there’s an obvious link between agricultural runoff and blue-green algae [cyanobacteria] bloom, but with Karenia, links from human activity to the severity of outbreaks are less established,” said Heil.

Larry Brand disagrees. Brand, a professor of marine biology and ecology at the University of Miami, studies hazardous algae blooms and believes agriculture most definitely plays a major role in red tides.

“Last year, there was a big blue-green algae bloom on Lake Okeechobee, and when water from the lake met the Gulf, it exacerbated the red tide already there,” Brand explained. “The Mote [Lab] won’t say there’s a connection because they receive a lot of state funding,” he added. “Much of the nitrogen reaching the Gulf comes from the sugarcane fields, but there is also a lot released from the exposed muck,” he said.

Travel inland from Florida’s coast and it’s a different world, one filled with large ranches and sugar farms that stretch to the horizon. The clear blue sky is often clouded with smoke as cane farmers burn the stubble for the year-round harvests (although a recent class action lawsuit is looking to change that).

For thousands of years, water flowed naturally from Orlando southward along the Kissimmee River watershed, around the shallow lake and in a wide swath southwest to Florida Bay. Along the way, wetland plants naturally filtered out pollutants before the water reached the Gulf. Then, in 1948, the Corps of Engineers created the Everglades Agricultural Area (EAA), an elaborate drainage system of pumps and canals crisscrossing a 700,000-acre area of rich muck for agriculture. North of the lake along the Kissimmee River, cattle graze, and vegetable farms spread fertilizer, often in the form of “biosolids,” or treated, recycled sewage sludge that farms acquire from local cities. And all the runoff ends up in Okeechobee. 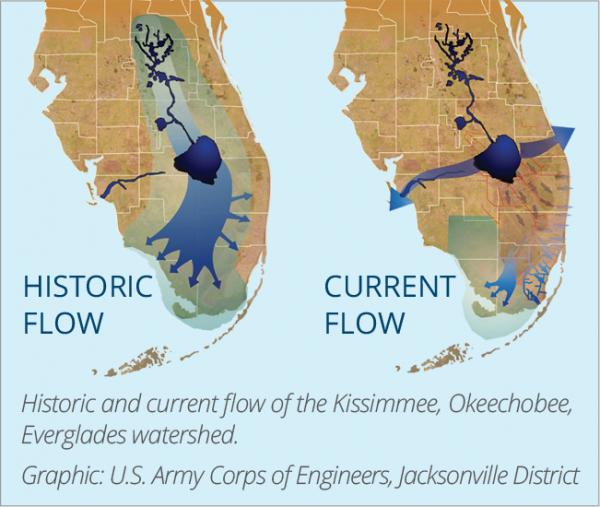 The peat is another source of nutrients. “The natural peat in the Everglades is fine underwater, but when it’s drained and exposed to air it breaks down, releasing lots of nitrogen,” Brand said, noting that restoring parts of the [cane] fields in the EAA by flooding them would stop much of the nitrogen pollution.

The sugar industry rules the land, thanks to the Sugar Act of 1937, which protected U.S. cane and beet growers from much cheaper Cuban sugar. As a result of the government subsidies given to sugar producers in the EAA, U.S. consumers pay more for sugar than the world market price. Although today many legislators believe it’s no longer necessary, the subsidy was again enshrined in the 2018 Farm Bill.

Two sugar giants lobby to keep the policy in place. U.S. Sugar is a company privately owned by the Mott Foundation that farms more than 230,000 acres of land and produces 700,000 tons of sugar per year, making it the largest producer of sugar cane in the nation. Florida Crystals, owned by the Fanjul family, farms 190,000 acres, with estimated revenues of $5.4 billion. These two companies, and the growers in the Florida Sugar Grower’s Cooperative, produce most of the nation’s sugar.

Bullsugar, an advocacy group that monitors the sugar industry and its impact on Florida’s water quality, notes that one out of five teaspoons of sugar consumed in the U.S. comes from the Everglades, giving Big Sugar in Florida the money to influence policy, which relates back to the EAA’s management.

According to Alex Gillen, a lawyer and the executive director Friends of the Everglades, which recently merged with Bullsugar, “We know the science, but the problem is political, and we need a political solution. Governor Rick Scott cut back water management staff under the [Florida] Environmental Protection Agency (EPA), and now there aren’t enough people to do proper water quality monitoring.” 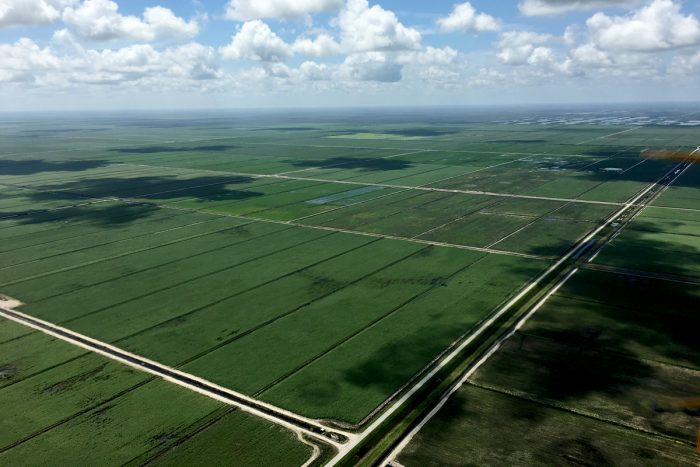 During Scott’s administration, from 2010 to 2016, growth management bills regulating subdivision development were gutted, Gillen said, leading to increased toxic algae blooms in the lake and escalating discharge-fueled red tide blooms, economic catastrophes on both coasts; the collapse of Florida Bay, and a water-starved Everglades. Much of the runoff comes from leaky septic systems.

But while many blame the algae-tainted water on the sugar industry, sugar growers maintain that they’re doing their part to stop the pollution.

“All the sugar is grown south of the lake,” said Judy Sanchez. spokesperson for U.S. Sugar. “We make sure all the water runoff from the cane fields contains less than 57 percent nutrients, twice the minimum 25 percent required by area water management.”

Sanchez said the runoff is from ranching and agriculture north of the lake, part of the Kissimmee River watershed that drains from as far north as Orlando.

Gillen acknowledges that population growth is also part of the problem. “Since 1948 when the Corps created the canal system, the population around Lake Okeechobee has risen from a few thousand to 2.5 million” he said. With the current estimate of 1,000 newcomers a day, Florida is seeing more lawn fertilizers, more septic tanks, and more water usage.

“Climate change may also be a factor … as we have more extreme weather events, stronger hurricanes in the Gulf, and warmer weather, it may create more virulent algae blooms,” Mote’s Cynthia Heil added.

Maggy Hurchalla is a long-time Florida environmental activist and former Martin County commissioner who has served on the water commission and the regional planning board. She said the legislature only offers lip service to most regulation attempts, and believes that restoring water flow and eliminating the record phosphorous from agricultural runoff is the best fix—which means mandatory source control and monitoring the industry.

“Gathering dirty water and trying to clean it is less efficient than treating it at the source,” she said, referring to reservoirs planned to retain polluted water.

“It seems like everyone who ran for state office in 2018 promised to save the environment,” said Hurchalla. And yet, she added “the legislature has done nothing except appropriate taxpayers’ money to clean up private for-profit messes. Agriculture won’t accept the blame, because they say everyone’s at fault, and we have to treat all the causes. But they seem to be unwilling to treat any of the causes.”

“The clay used in aquaculture in South Korea adheres to the [Karenia brevis] cells so they sink to the bottom,” said Heil. “We’re testing it in a couple of canal areas in St. Petersburg, but we need permits to do this.”

Across the Gulf’s coastal regions, cities and counties are also enacting mandatory “black-outs” for fertilizers during rainy summer months to keep homeowners and golf courses from adding to pollution, but farms are exempt from the ban. Although there’s controversy on the direct causes of red tide, everyone agrees runoff provides excess nutrients that feed the blooms, increasing their length and severity. 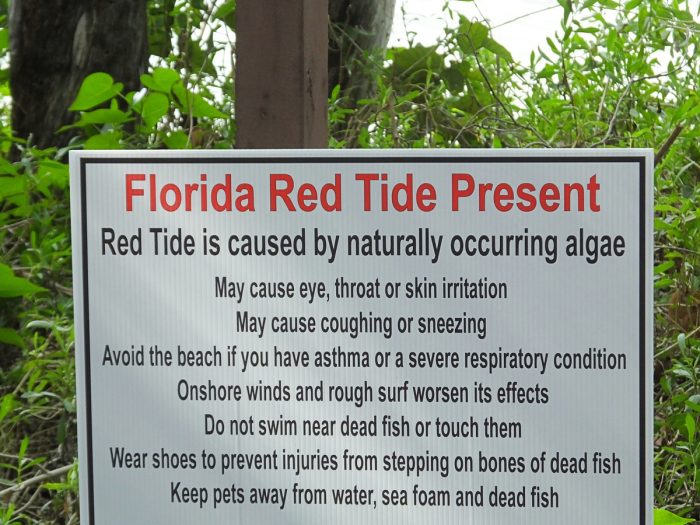 Florida’s natural pine and wetland mosaics could also pose a solution by filtering water before it gets released into major bodies of water. “Runoff of phosphorous from a natural wetland is 1/40th of that from a developed area—whether agricultural or urban,” said Hurchalla. “The faster we develop under existing rules, the worse our problems become.”

Yesterday, governor Ron DeSantis signed into law SB 1552, which creates the Florida Red Tide Mitigation and Technology Development Initiative, and provides $15 million over the next five years to Mote Marine Laboratory to research red tide. He has also asked Congress for $100 million to fund Florida Forever, a program aimed at restoring and maintaining wetlands in the state. He initially received $23 million, then, in mid-May, President Trump signed a bill offering $200 million.

Alex Gillen said that these funds may help address the problem, but it may also fall in the “earmark” category of money marked for a single purpose, and face challenges from uninvolved legislators.

“Some of that funding comes from Pell Grant money, so that’s a problem,” he added, noting that taking money from the popular grants for college students would not receive much support.

Back at the Gulf, University of Florida’s Jack Davis believes it’s long past time to focus on preserving the living shore with mangrove forests, coastal marshes, and seagrass beds.

“These create filters, a carbon sink, plus a habitat that makes a defense against pollution,” he said. “And we must encourage regenerative farming that won’t create such toxic runoff that ends up in the Gulf.”

This article was updated to reflect the fact that Alex Gillen is now the executive director at Friends of the Everglades, which recently merged with Bullsugar, where he was the policy director.