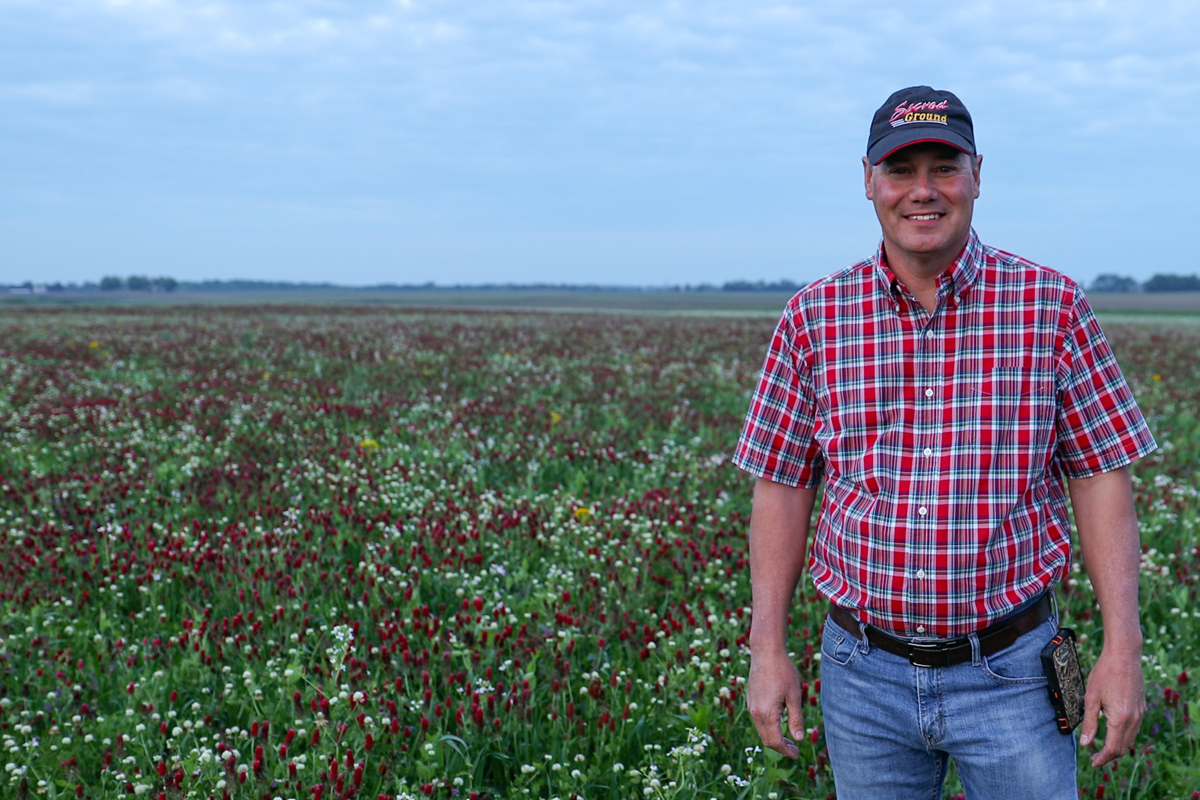 When yogurt maker Dannon (part of Danone North America) announced in 2016 that it would transition some of its products to non-GMO verification, the company had to find farmers to provide non-GMO feed for the dairy cows that produce milk for its yogurt. This was no easy task, because the vast majority of feed in the U.S. is produced from genetically modified corn and soybeans.

One of the farmers the company signed up with is Rick Clark, a fifth-generation farmer in Warren County, Indiana, located in the west-central part of the state, between the Wabash River and the Illinois state line. Clark’s family has lived on the farm since the 1880s, and today the farm encompasses 7,000 acres.

While Clark produces non-GMO corn and alfalfa for Dannon, as well as profitable cash crops, including non-GMO soybeans for a Cargill facility in Lafayette, Indiana, he does much more than that: he has also developed a unique system for building soil health. Across his property, Clark uses regenerative practices including diverse crop rotations, no-till methods, and cover cropping, and he is striving toward the tough task of combining no-till practices with organic certification.

Clark is one of a small but growing number of farmers who are adopting regenerative agricultural practices to build soil health. (Others include Gabe Brown in North Dakota and David Brandt in Ohio, who were featured in David Montgomery’s book about regenerative agriculture, Growing a Revolution.) His farm offers a practical, proven example of how regenerative farming methods can transform agriculture. 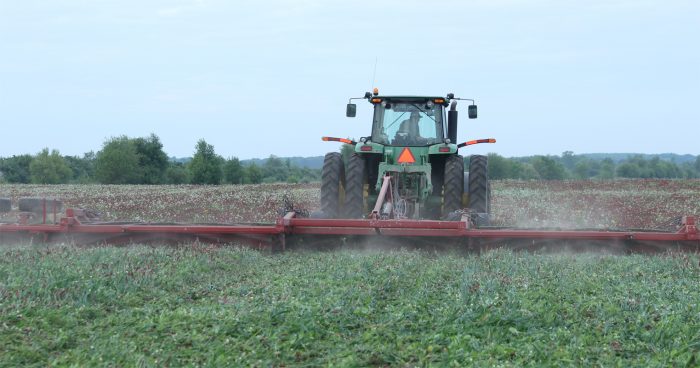 “Diversification drives the system,” he says. “I care deeply about building soil health and will sacrifice yield to maintain soil health.”

Big brands and organizations are paying attention. In 2017, Clark was honored as Dannon’s Sustainable Farmer of the Year. More recently, Land O’ Lakes honored him with an Outstanding Sustainability Award, and he was also a regional winner of the American Soybean Association’s Conservation Legacy Award.

Greg Downing, an agronomist with Cisco Farm Seed, who has worked with Clark for several years, calls Clark’s commitment to soil health “150 percent.” “I think Rick saw early on that building soil health was simple: that when you have something growing all the time and are doing crop rotations, you are doing good things to the soil,” Downing says. “You are going to regenerate a lot of life, biology, as well as minerals.”

According to Downing, a key to Clark’s success is his willingness to experiment and find the best ways of doing things. “There are no barriers for Rick,” he says. “There is no textbook saying you should do this and shouldn’t do that. For him, there’s always better, there’s always more, and finding out how to do more. He’s an experimenter with capital ‘E.’ When you talk about the phrase ‘thinking outside the box,’ well, I don’t really think Rick has ever been in a box.”

Because of his success, Clark’s farm was also chosen, along with 15 other farms in the U.S., as research subjects for soil health experts as part of Danone North America’s $6 million soil health research project. The project aims to identify ways to regenerate soils and provide training in soil health best practices to farmers.

Tina Owens, senior director of agriculture at Danone North America, cites Clark as one of the project’s “shining examples.” “This is real on-the-ground change we are talking about, and we have seen first-hand that Rick exemplifies that level of change,” Owens says. “When we talk to other farmers and other growers in our network, we refer to Rick as an example of the right things to do.”

Clark is happy to share his knowledge of regenerative agriculture with other farmers. He is often asked to speak at conferences and presented at the National No-Till Conference this past January in Indianapolis. As soil health gains traction among farmers nationwide, Clark is confident that others can succeed as he has. “I’m just a farmer in Indiana,” he says, “and if other farmers have a plan and care about building soil health, they can achieve these things, too.”

Clark says he learned soil health practices from a neighbor. “We conversed about what he was doing, and when I had the opportunity to have total control of the farm [in 2010], we switched everything to no-till and cover crops,” he says.

Additionally, Clark has planted all non-GMO crops since 2014, when a nearby dairy asked him to grow non-GMO corn for feed, resulting in his partnership with Dannon. Non-GMO seed is cheaper and yields as much as GMO seed, Clark says. (Because conventional row crop agriculture is so dominated by genetically modified seed, there is very little research into the benefits of growing non-GMO seed.) Beyond the economic incentives, Clark says, “I just prefer to not plant GMO seed, and I want to have a symbiotic relationship with Mother Nature.”

Clark has also put in place a number of practices aimed at increasing soil health, which he defines simply as “decreasing inputs and increasing yield.” “If your inputs are going down, and your yields are going up, how can you not be building soil health?” he says. “That is exactly what this farm is doing.”

First, he rotates his crops. In addition to adding nutrients such as nitrogen to the soil, crop rotation interrupts pest and disease cycles, reducing weeds, insects, and the need for chemical pesticides. One-third of Clark’s farm is in a three-year rotation with corn, soybeans, and wheat. Another third is in a four-year crop rotation—corn, soybeans, wheat, and alfalfa—for a dairy that produces milk for Dannon. And the final third is in transition to organic.

Secondly, Clark practices no-till farming. By not plowing, which disturbs the soil, the farming method reduces soil erosion and sequesters carbon, which mitigates climate change. He has practiced no-till farming with corn for 10 years and soybeans for 15 years.

And finally, Clark has planted diverse “cocktails” of cover crops for the last 10 years. Each fall before the next spring’s planting, he plants a mixture he calls “gunslinger” on his corn fields. The mix includes five crops that each performs a necessary function for soil health: Haywire forage oats build biomass to protect the soil; sorghum sudangrass promotes the growth of beneficial mycorrhizal fungi; tillage radish helps break up compacted soil; and Austrian winter peas and balansa clover add nitrogen, an essential nutrient. On his soybean fields, he plants cover crops such as cereal rye in the fall before planting soybeans the next spring. 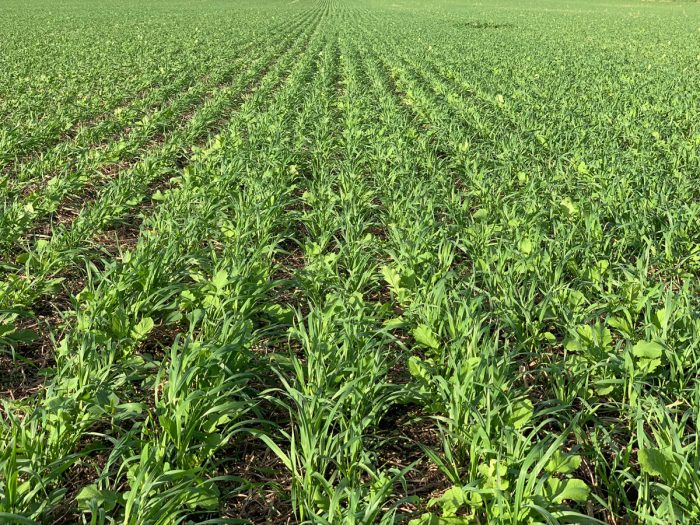 A field of cover crops including a mix of oats, radish, peas, fixation clover, and sorghum sudangrass.

He plants corn and soybeans directly into the cover crops in the spring, a practice he calls “farming green.” “We will not plant our corn or soybean crops unless it is into green growing cover crops,” he says.

He has realized many benefits from farming green. Planting cover crops has helped build organic matter and improve soil health, which has increase crop yields. “We’re extremely profitable,” Clark says of his farm. The practice has also improved water infiltration, because rain penetrates into the soil instead of running off, and it has created a protective “armor” for the soil by adding nitrogen, preventing erosion, and smothering and out competing weeds. 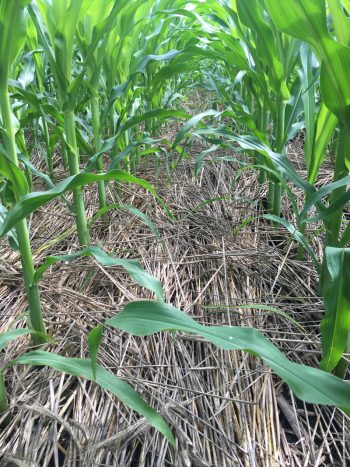 Since he began farming green, Clark has dramatically decreased the use of chemical fertilizers and pesticides. “We use no seed treatments, no insecticides, and no fungicides,” he says. “We are to the point where we have nearly eliminated synthetic fertilizers. We only use a little nitrogen on our non-GMO crops. So our cost of production is extremely low.”

After reducing chemical inputs, the next logical step would be to grow organic, and Clark is doing that for the challenge. “I also want to continue to make the farm better for the next generation,” he says.

He is transitioning 2,000 acres and will have 400 acres certified organic this month. He plans to grow organic corn using his system of cover crops and no-till.

Clark admits that practicing no-till in organic is a challenge. Few organic farmers practice no-till farming; many continue to plow their fields to eliminate weeds. “Some people think [no-till organic] sounds crazy, but that’s normal for me,” Clark says. “If I can get this figured out, it should be a pretty big deal.”

Many farmers who convert to organic face challenges selling their transitional crops, but Clark has an advantage: “I can use alfalfa as my transition acres,” he says. “It is easy to grow, and I can sell it to the dairy.”

Clark is confident he can produce strong yields of organic corn this year, his first producing a certified organic crop. “At $10 a bushel [paid for organic corn], that is quite a return on your investment,” he says. Conventional corn currently earns around $4.23 per bushel.

Regenerative agriculture, with its focus on soil health, is a major trend, and Clark is on the leading edge. But he doesn’t use the word “sustainable” to describe his practices. “That means staying the same,” he says. “I prefer the word ‘regenerative,’ and I have a systematic approach to regenerative farming.” 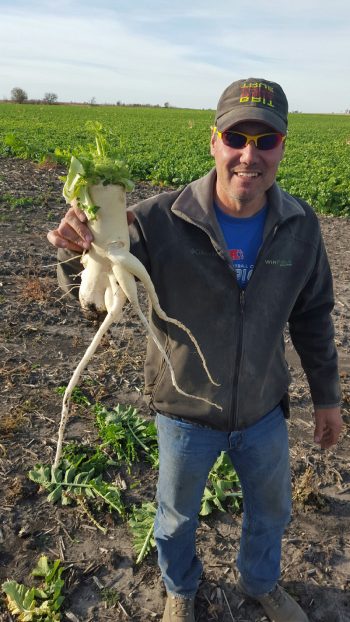 With the United Nations Food and Agricultural Organization recently warning that more than 90 percent of the earth’s soils could be degraded by 2050, there is an urgent need for the soil-building practices of Rick Clark and like-minded farmers.

“We have got to figure out a way to stop this erosion and losing our topsoil, because it’s not coming back,” Clark said. “I hope that I can build a system that can be adopted across different regions. I’m not trying say my system is better than anyone else’s; I’m just saying that the system I’m working on is working for me and my farm, and I think it could work for other farms. We can all make a difference for being good stewards of the land, building soil health, and being conservationists.”

A version of this article appeared in The Organic & Non-GMO Report.