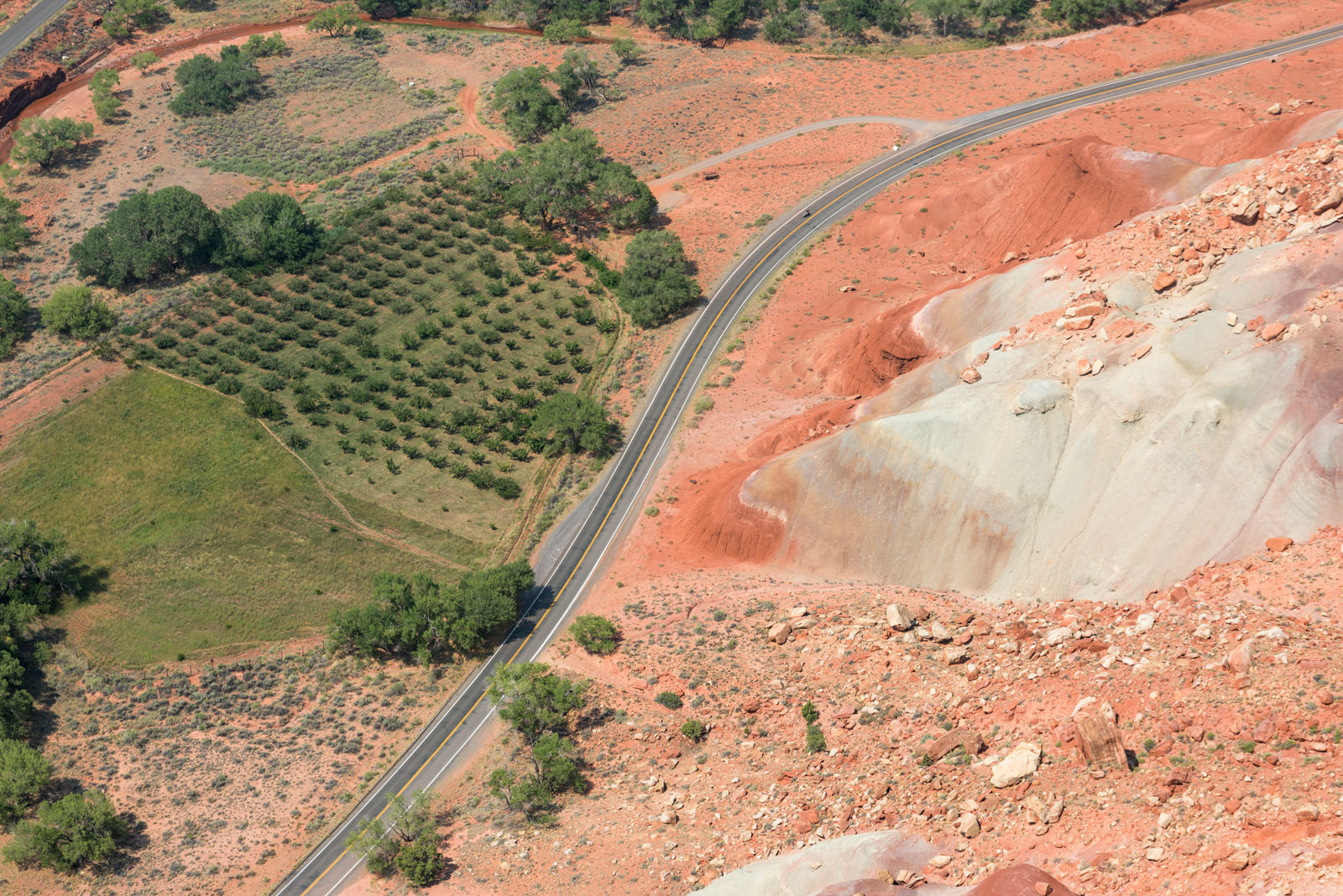 In the heart of the red rock desert in southeast Utah, the Fremont River and Sulphur Creek valleys intersect. A verdant spread of fruit trees spill out from this junction, a startling juxtaposition of lush green against the dusty orange canyon walls rising up hundreds of feet.

Early in the morning, while the shadows of the cliffs provide respite from the heat of the desert, visitors to Capitol Reef National Park haul step-ladders into the orchards to harvest apricots, pears, apples, and peaches from the trees. Following the weekly picking schedule posted in the park throughout the summer months, parkgoers pay $1 a pound to carry fruit out of the orchards to enjoy after exploring the natural arches and geologic folds.

The orchards were planted in 1881 by a group of homesteaders belonging to the Church of Jesus Christ of Latter-day Saints (LDS) who set out from Salt Lake City to settle southern Utah in the name of the Church. They eventually established more than 3,100 fruit trees across 181 acres of irrigated orchards in the high desert valley.

The pocket of orchards and homesteads, which eventually included a school, a dugout wash road, and a massive cottonwood tree with mailboxes nailed into it, came to be known as Fruita. The district required an extensive system of ditch irrigation, dug manually and maintained each year, to extend the flow of water beyond the seasonal floodplains of the Fremont River and Sulphur Creek.

For 50 years, the settlers lived in a close-knit LDS community, until local residents launched a campaign to designate the area as a park or reserve due to its unique geology. In 1937, President Franklin Delano Roosevelt named the area a National Monument. Fruita became the headquarters of Capitol Reef when it became a National Park in 1971, and received infrastructural improvements, including a campground, picnicking spaces, and a connection to State Highway 24 through the Fremont River Canyon.

Over the past century, the National Park Service planted semi-dwarf varieties of apple trees that were not growing during the pioneer settlement period for which the rural historic district is recognized. The Park Service is working to replace aging trees with the original cultivars that the settlers planted.

Planting native varieties that are adapted to the area is also an attempt to lessen the effects of climate change, which will bring increasing summer temperatures and more erratic rainfall to southern Utah. As rainfall decreases, the park will need to move away from flood irrigation to less water intensive methods of orchard maintenance.

Capitol Reef is not the only park within the National Park System that is charged with maintaining historic orchards; there are 101 properties with aging trees across the country that pose a similar suite of horticultural and maintenance challenges. These concerns offer the chance for units to collaborate to find best practices to keep orchards open to the public, and to handle increasing visitation.

“Five years ago we had 600,000 visitors when the park was only designed to handle about 100,000 annually. Now that number is 1.3 million,” says Jim Roche, acting chief of natural resources and management at Capitol Reef National Park. “It’s certainly the smallest of the big five National Parks in Utah, but like all parks across America that are seeing huge increases in visitors, it’s a challenge to live up to.”

Against this background of managing public access and conserving the historic landscape, the challenges of transforming Fruita from a rural LDS outpost to a productive landscape fixture within the National Parks system remain. 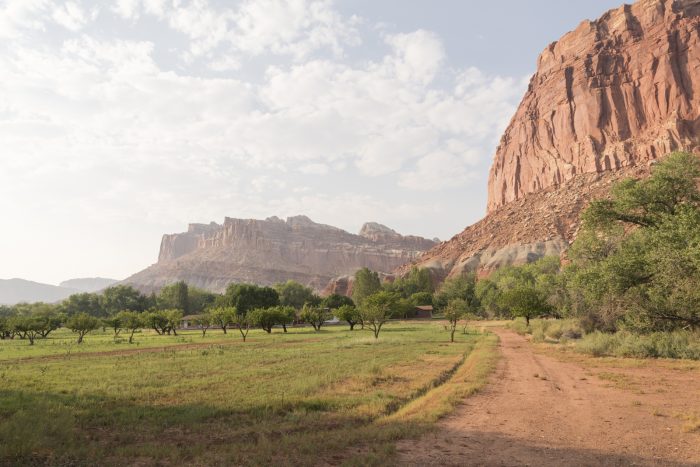 The mid-day sun over the apple orchards in Fruita Rural Historic District. At its peak in the late 1920s, 181 acres of orchard were under cultivation by LDS settlers, who set out from Salt Lake City to spread their religion throughout southern Utah. 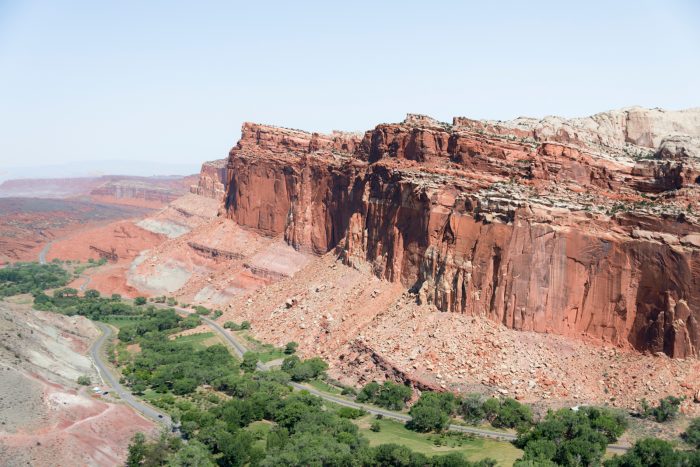 A view of the Waterpocket Fold and Fruita’s Orchards, seen from the Cohab Canyon trail in Capitol Reef National Park. The Waterpocket Fold, a geologic feature that runs through southeastern Utah, is characterized by the significant drop in elevation from its west face (shown above) to the east face. An interest in the Fold and its surrounding natural arches initially spurred President Roosevelt to designate 37,711 acres as Capitol Reef National Monument in 1937. The Monument had expanded to cover 254,251 acres when President Nixon signed the bill to create Capitol Reef National Park in its place in 1971. 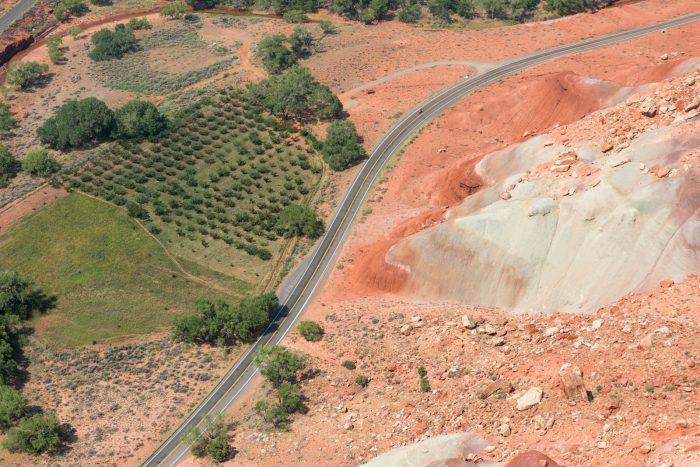 A grove of gridded fruit trees behind Utah State Highway 24 seen from the Rim Overlook trail in Capitol Reef National Park. When Fruita was first settled in 1880, State Route 24 was a gravel road that connected to a dusty dirt road leading to Fruita. The advent of the automobile era in the 1920s created a new market for tourism in the isolated reaches of Utah, and the National Park Service funded six miles of highway in 1962. State Route 24 (visible in the top left of the image) became the Scenic Drive within the park, while Utah State Highway 24 became the primary thoroughfare to Fruita. 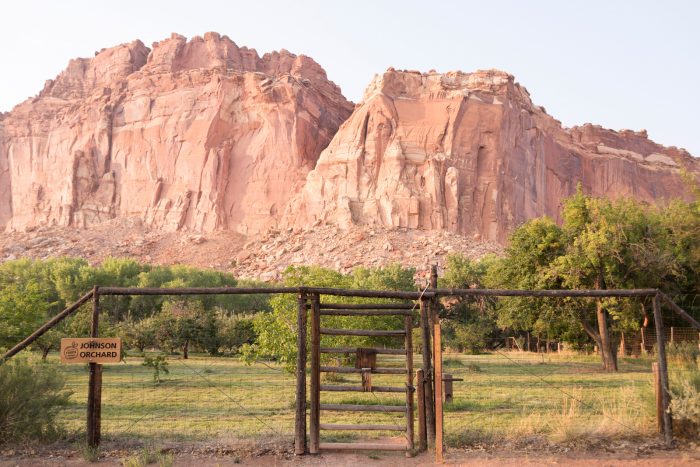 The gates to the Johnson Orchard. Nels Johnson was one of the first homesteaders to arrive in the Fruita area in the late 1880s, then called Junction. He was allotted 160 acres, and planted 11 acres of orchards by the turn of the 20th Century. The National Park Service began acquiring the private land within Fruita in the 1930s; by 1964, there were only 16 acres of private holdings in Fruita. During this transition period the orchards were maintained by local residents through special use permits distributed by the National Park Service. 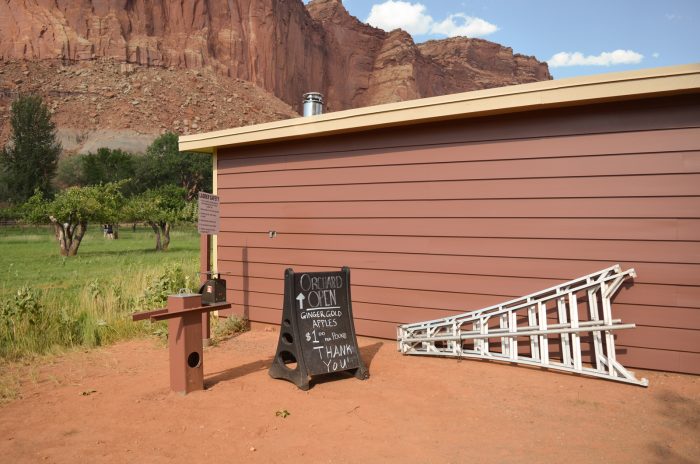 Pruning ladders are available at the entrance to open orchards. Today, the National Park Service oversees the maintenance of 3,100 trees within the Fruita Historic District, including irrigation, pruning, and maintaining accessibility in the orchards. The park’s website include a general overview of the productive trees and their flowering and fruiting times. 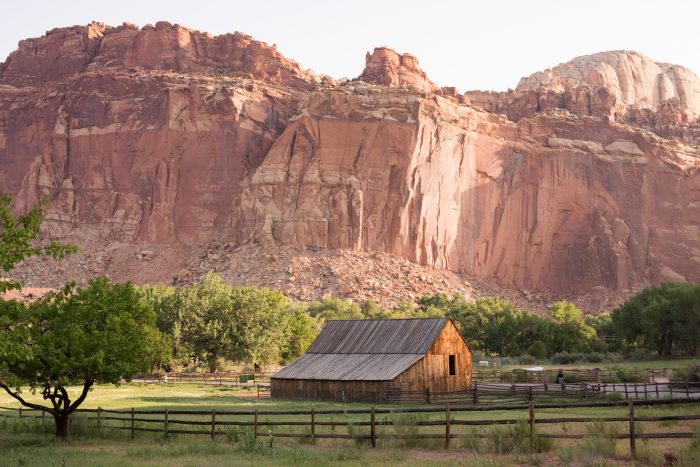 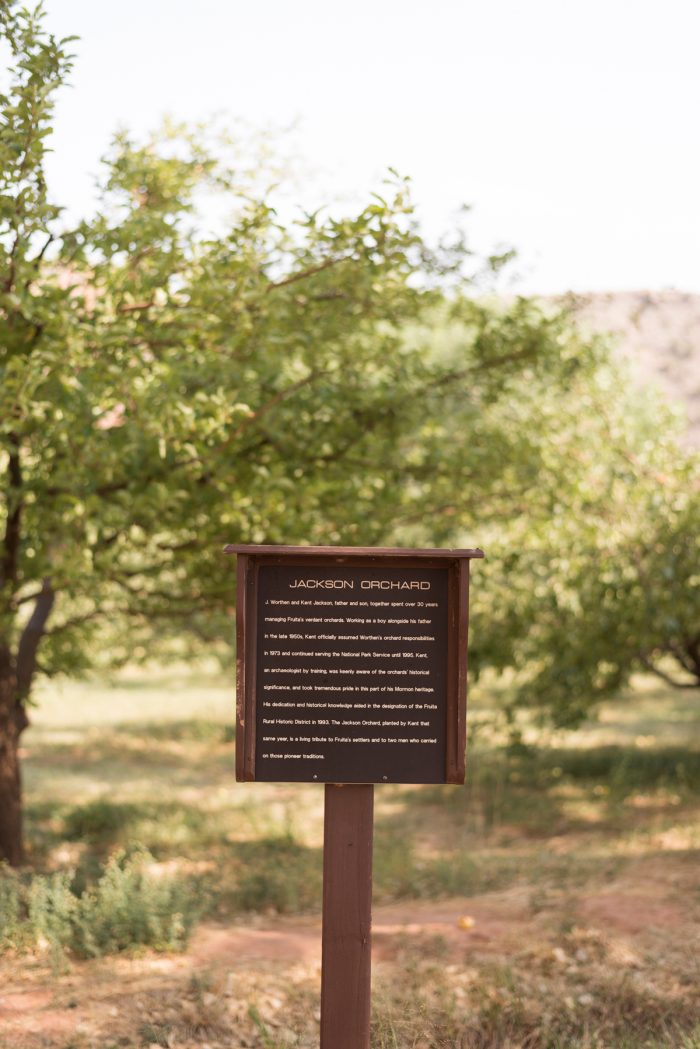 The entrance to the Jackson Orchard. The orchard is named for Worthen and Kent Jackson, a father and son pair who managed many of Fruita’s orchards during the transitional phase from private holdings to federal land in the 20th Century. Kent served as the orchard manager for the National Park Service from 1973 to 1995. The names of the orchards honor some of the original settlers of Fruita, as well as caretakers of the orchards themselves. 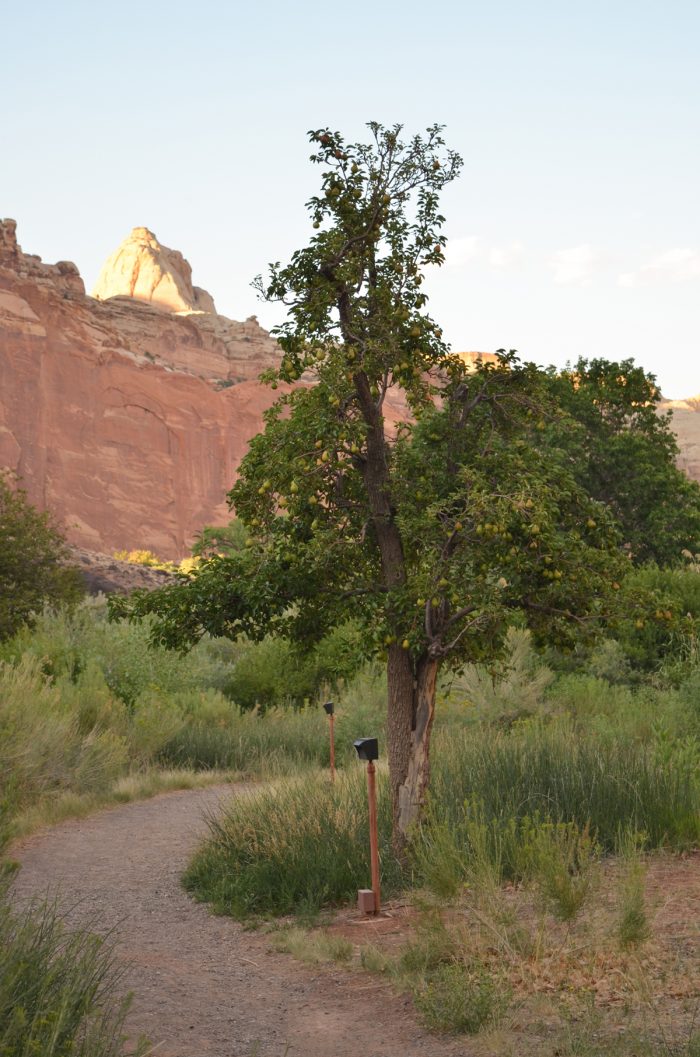 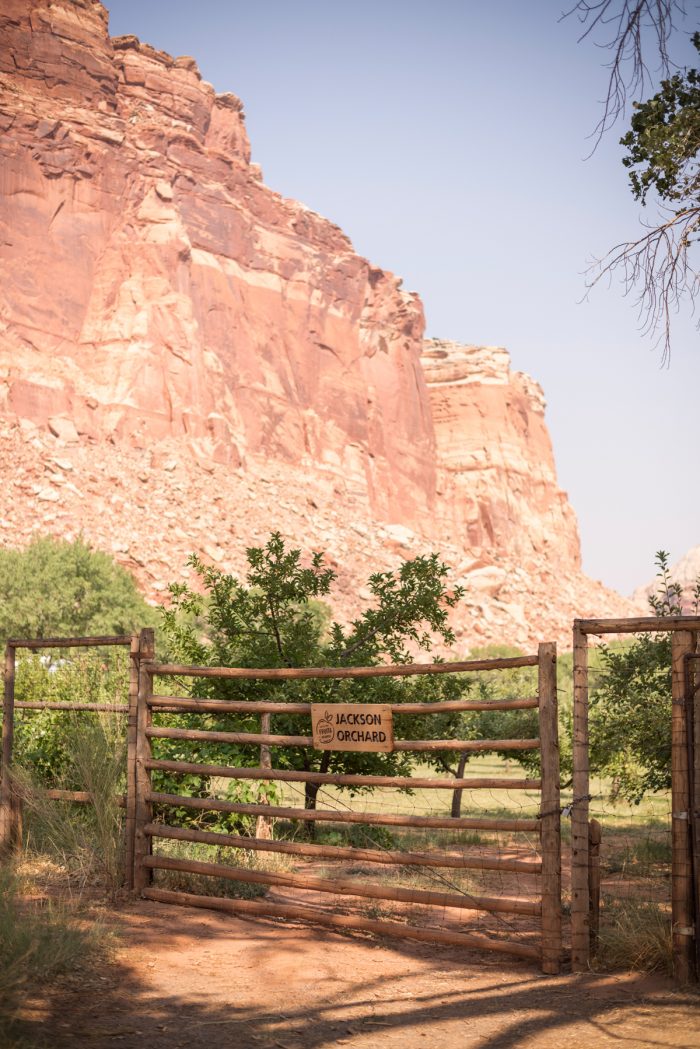 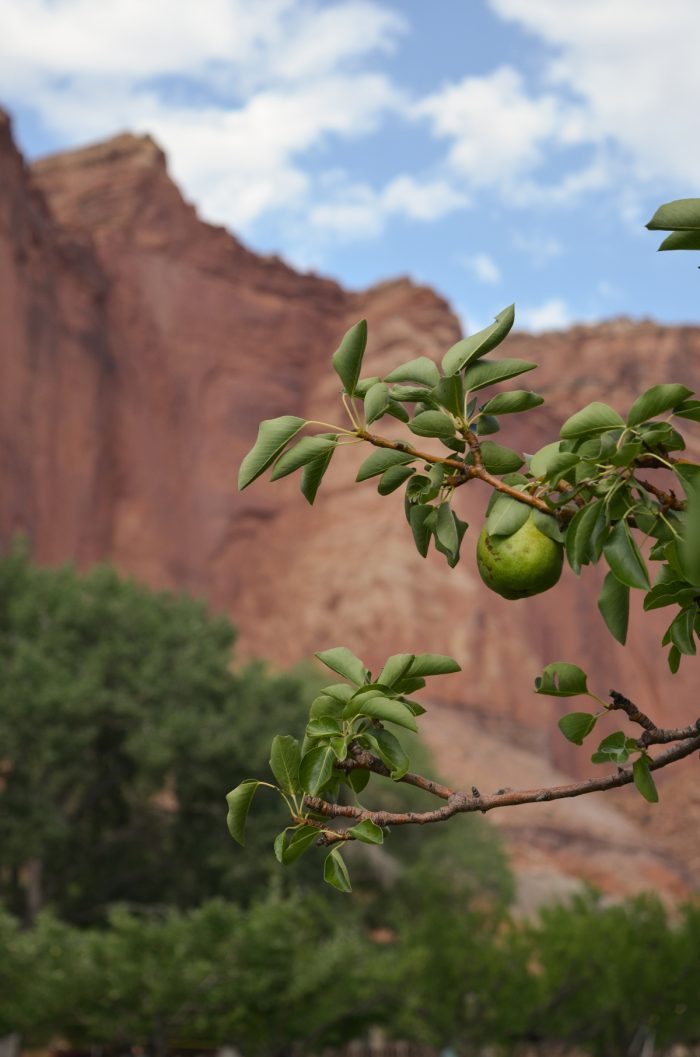 A ripe pear dangling off an aging tree beneath the Waterpocket Fold of Capitol Reef National Park. Produce that is not eaten or harvested by tourists or residents ultimately falls off the trees and goes to waste or the park’s large population of mule deer. There is currently no system to harvest excess fruit to sell within the park or in the surrounding communities. 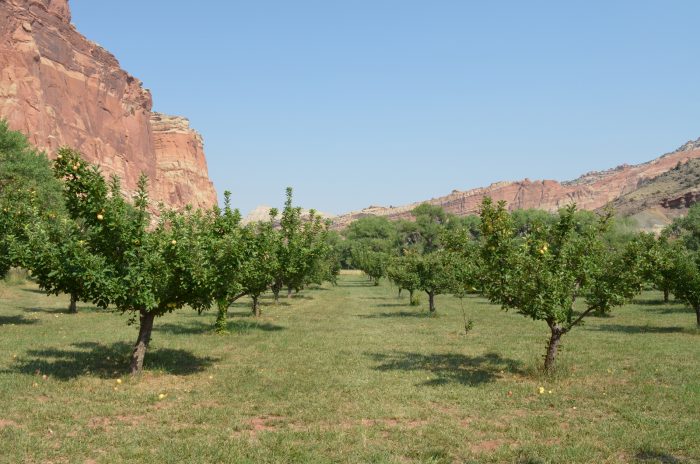 Apple trees in the Fruita District of Capitol Reef National Park. The future of the orchards in Fruita relies on revising maintenance practices to account for a changing climate and increasing numbers of visitors on the land.