Residents of the Delmarva Peninsula and community advocates say the poultry industry is thwarting their efforts to monitor harmful air pollution from chicken farms. 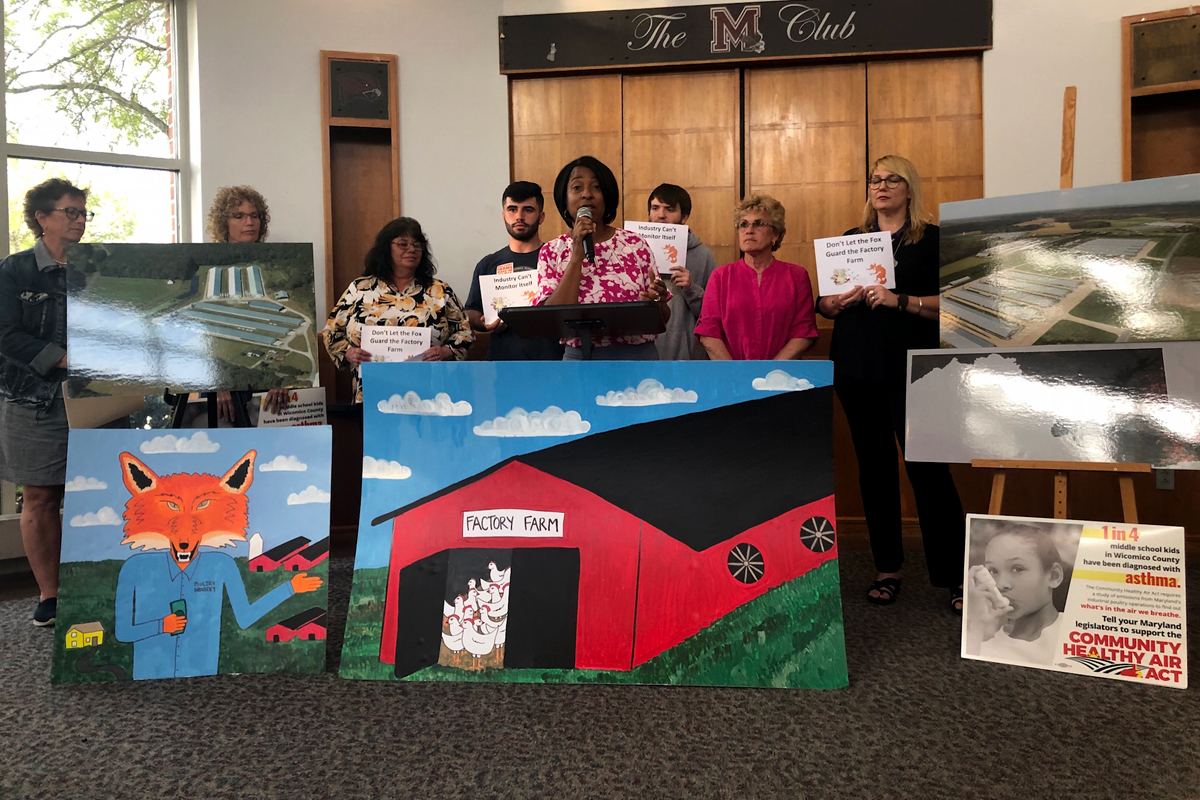 Twenty-four years ago, Sam Berley bought a little house on a quiet stretch of Backbone Road in rural Princess Anne, Maryland. Today, the house appears tiny, because it’s dwarfed by six massive metal barns that together house more than 250,000 chickens. The closest one is just 240 feet away.

Berley often stays inside with the windows closed to avoid the awful stench that comes and goes; his neighbor Lisa Inzerillo, who lives about a mile down the road—beside other concentrated animal feeding operations (CAFOs)—does the same. “At night, we turn on a flashlight … and it looks like it’s raining outside there are so many particles [in the air],” she said.

Inzerillo and Berley want to know what exactly those particles are and what breathing them in every day might mean for their health. While there are some statistics showing high rates of respiratory conditions like asthma and chronic obstructive pulmonary disease (COPD), hard numbers about the air (and therefore how it may relate to those conditions) on the Delmarva Peninsula are lacking.

When a group of Delmarva residents tried to bring their concerns about air quality to local agencies a few years back, Maria Payan recalls, “The county was like, ‘We can’t do anything for you, because we don’t have Maryland data.’”

Payan is an organizer with the Socially Responsible Agriculture Project (SRAP) who moved to the Delmarva Peninsula—the area where Delaware, Maryland, and Virginia meet—after abandoning her house in Pennsylvania because her family’s quality of life had been destroyed by a trifecta of neighboring poultry, hog, and beef CAFOs. She has been organizing around the issue for years—meeting in people’s kitchens, building coalitions among local groups, and gathering research data. Payan is just one player involved in a larger battle to gather adequate data about air quality in the region; elements of her story are featured in the new documentary Right to Harm.

Chickens on the Chesapeake

Jutting into the Atlantic Ocean south of Philadelphia, the 170-mile Delmarva Peninsula is a mash-up of communities, including the moneyed vacation towns of Maryland’s Eastern Shore and Ocean City, the state’s popular family beach destination. However, agriculture is another major economic driver in the region, and the highway that stretches north to south is flanked first by soy and corn fields, then by industrial chicken barns.

Maryland produces more than 64 million chickens for meat every year. There are currently 312 registered poultry CAFOs in the three Maryland counties on the Southern end of the peninsula, where production is the most concentrated. Most barns are over 600 feet long (or nearly the size of two football fields) and hold up to 50,000 chickens, and most farms have several barns. Some of the biggest operations raise close to 400,000 birds at a time. 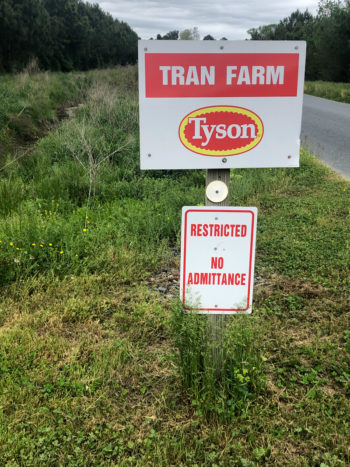 In Somerset County, there are areas where one can turn in a circle and see hulking chicken barns in every direction. The massive fans that keep air circulating out of the barns maintain a constant whir, and every now and then the odor presents itself, prompting gagging, coughing, and watery eyes.

The quaint 1917 farmhouse where Perdue Farms—the fourth largest poultry producer in the U.S.—tells the origin story that began with happy backyard chickens is less than 20 minutes away. But the Perdue contract farms, filled with massive barn after barn, are silent except for the whir of the fans—there are no people or chickens in sight (since the birds never go outside). Along the farms’ perimeters, multiple signs read “restricted area” and “no admittance.”

Monitoring the Air: A Political Tug-of-War

While the smell of large-scale livestock production makes life anything but pleasant for nearby residents, CAFO emissions are also linked to a wide range of negative health consequences. A 2017 study found residential proximity to CAFOs was associated with asthma medication orders and hospitalizations, while a 2015 review of the available scientific literature found consistent correlations between living near CAFOs and respiratory problems including asthma, and COPD, as well as MRSA, hypertension, and other health problems.

Many of those studies focused on hog production, however, since the body of research on hogs is larger, explained Keeve Nachman, the lead author and the director of the food production and public health program at Johns Hopkins Bloomberg School of Public Health.

One study published in 2018 did look specifically at poultry CAFOs in Pennsylvania, and found that people with high rates of exposure to emissions from the farms were 66 percent more likely to be diagnosed with community-acquired pneumonia (CAP).

In one Maryland county, the childhood asthma rate between 2005 and 2009 was 25 percent (compared to a national rate of 8 percent) and respiratory disease is 54 percent higher than the state average. (Rates of smoking in the area are also much higher than average among both adults and children.)

Nachman explained that science has already established that exposure to air pollutants like ammonia and particulate matter is associated with adverse health outcomes at certain levels. But because of a lack of air monitors in the area, no one knows how much of these contaminants residents are being exposed to. 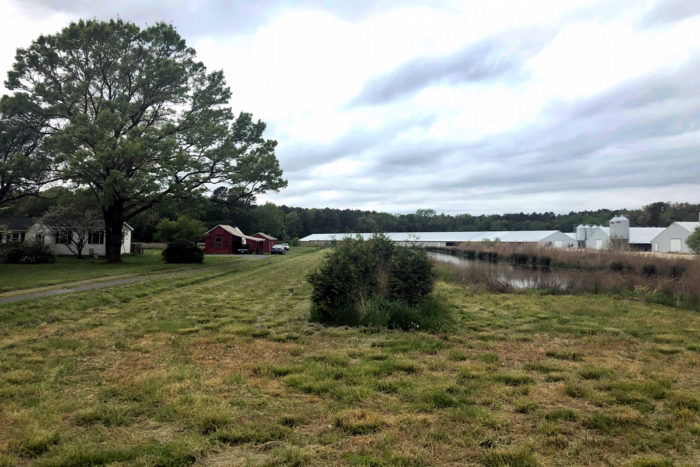 “We know ammonia is associated with certain endpoints in people, and you need a certain amount to get people sick,” Nachman says. “So we know that’s a component of the mixture [of contaminants, and]… we can make inferences as to what health outcomes we might expect.” (It is not possible, however, to definitely prove that an individual’s asthma was caused by a neighboring poultry CAFO.)

For this reason, Delmarva residents worked with lawmakers to propose the Community Healthy Air Act (CHAA) in 2017. The bill calls for the deans of the three prominent local universities to appoint an expert committee consisting of toxicologists, epidemiologists, and commercial poultry producers to design an air-monitoring plan for the area. “Developing rigorous data that we can base a decision on requires people with lots of different expertise,” Nachman said. “They each have a relevant piece of the puzzle.”

It also specifies the need to monitor certain pollutants like ammonia and particulate matter but leaves the door open to monitoring additional substances, and it mandates that the plan be subject to both public comment and external peer review. Once the plan was approved, it would be handed over the Maryland Department of the Environment (MDE) to implement.

Delmarva Poultry Industry (DPI), the trade association that represents the biggest local companies, including Perdue, Tyson, and Mountaire, along with contract farmers, actively lobbied against the CHAA; despite community-organizing efforts, in April, the Act failed for the third year in a row.

Meanwhile, emails obtained by advocacy group Food & Water Watch through a Public Information Request (PIA) and reviewed by Civil Eats show that in May of 2018, Porter (who at the time was the assistant executive director) along with representatives from both Perdue and Mountaire met with MDE deputy director Angelo Bianca to discuss air monitoring.

Throughout the year, while the Community Healthy Air Act was stalled in the state legislature for a third time, DPI, MDE, and Annapolis-based nonprofit the Campbell Foundation, formed a partnership to design their own air monitoring plan.

This plan, as presented at a public meeting this April, would add two monitoring stations on the lower Eastern Shore, collect some data on ammonia and particulate matter, and compare that data to elsewhere in Maryland. (MDE is accepting public comment on the project through May 22.)

Nachman says that the scope is “a stripped-down version of one piece of what the CHAA would require. It will not answer questions about if and how animal production sites affect health in the community.” He worries that the data it generates could be misinterpreted as conclusive and used to unjustifiably dismiss the concerns of the community.

Michele Merkel, a lawyer at Food & Water Watch who left the Environmental Protection Agency (EPA) after being told she could not continue to pursue legal action against food companies on behalf of individuals harmed by factory farms, said it’s a narrative she recognizes all too well. “The industry is using the same playbook they’ve been using to avoid transparency,” she said. “The industry-led study was designed not to produce useful data, and the delay that this study has provided to the industry is undercutting any broader effort.”

Before the meeting where the industry’s monitoring plan was announced, a group of NGOs and activists, including Maria Payan, held their own press conference.

“The project that will be presented by [the state] here tonight is not what the residents of the Lower Shore want or need,” Kathy Phillips, head of Assateague Coastal Trust, one of Delmarva’s oldest environmental organizations, told the small crowd. “This industry-funded project effectively derailed the Community Healthy Air Act in 2019 by allowing MDE to use their limited project as an excuse to ignore the citizen-led coalition and public health expert-supported CHAA.”

In response to that accusation, DPI communications manager James Fisher said while discussions about the CHAA “certainly sparked a conversation” about the need for air monitoring, the MDE-DPI effort is a different project altogether. “This project aims to gather ambient air quality about the communities where Marylanders and Eastern Shore residents work and live every day,” he said. “We don’t see it as competition with the CHAA.”

The biggest concern among those gathered that day was industry influence on the data, which Bianca, Porter, and the Campbell Foundation each dismissed. Samantha Campbell, the foundation’s president, said at the meeting that their interest in the project stems from the foundation’s long-time mission to address environmental issues in the Chesapeake region and that she had been looking for “more opportunities for working with farmers, agricultural interests, and the poultry industry,” when MDE reached out to ask if they would provide funding. She also said the Campbell Foundation’s significant funding showed it was not “purely an industry-funded study” and that “it’s a first step in gathering data that doesn’t prevent more data from being gathered. “

Bianca said MDE would run the monitoring independently, and there would be a “wall” between the agency and DPI. “MDE is running the monitors,” he said. “[DPI] is not touching the data, they’re not gathering the data, they’re not interpreting the data, that is all us.” In a statement emailed to Civil Eats, MDE spokesperson Jay Apperson echoed Bianca’s comments. “The Maryland Department of the Environment considers this monitoring plan to be a meaningful first step to gather science-based information on air quality near poultry houses. It is important to note that while Delmarva Poultry Industry and the Campbell Foundation are funding the project’s equipment, MDE, and only MDE, will collect and interpret the data.”

The signed memorandum of understanding for the project, which Food & Water Watch also obtained and Civil Eats reviewed, is less specific, stating that the “partners will work together to complete the Project” and that industry group DPI will be responsible for helping MDE to both locate and secure “suitable” sites for the new air monitors. Organizers also cite past evidence that suggests that when research does not align with its interests, the industry reacts.

SRAP’s Maria Payan read from the letter at the press conference, and while the idea that an industry group would attempt to influence public university research might shock those new to the story, her neighbors and fellow activists were not surprised.

“Companies monitor the ammonia in the chicken houses for the chickens. If it’s too much ammonia in there, you’d better run some more fans and blow it outside; it’ll be okay on your neighbor,” said Carole Morison, a former Perdue contract farmer who was featured in the 2008 documentary Food, Inc., and is now a local activist. “I find this absolutely ridiculous, that chickens have become more important than the residents of the Eastern Shore.”

This article was updated to reflect the fact that The Campbell Foundation is based in Annapolis, not California.