Where Do Food Banks Fit in to the Fight for a Green New Deal? | Civil Eats

Where Do Food Banks Fit in to the Fight for a Green New Deal?

A professor and researcher argue that this is a crucial moment to consider the key role that food charities have to play in rewriting the rules of our food system.

By Maggie Dickinson and Joshua Lohnes 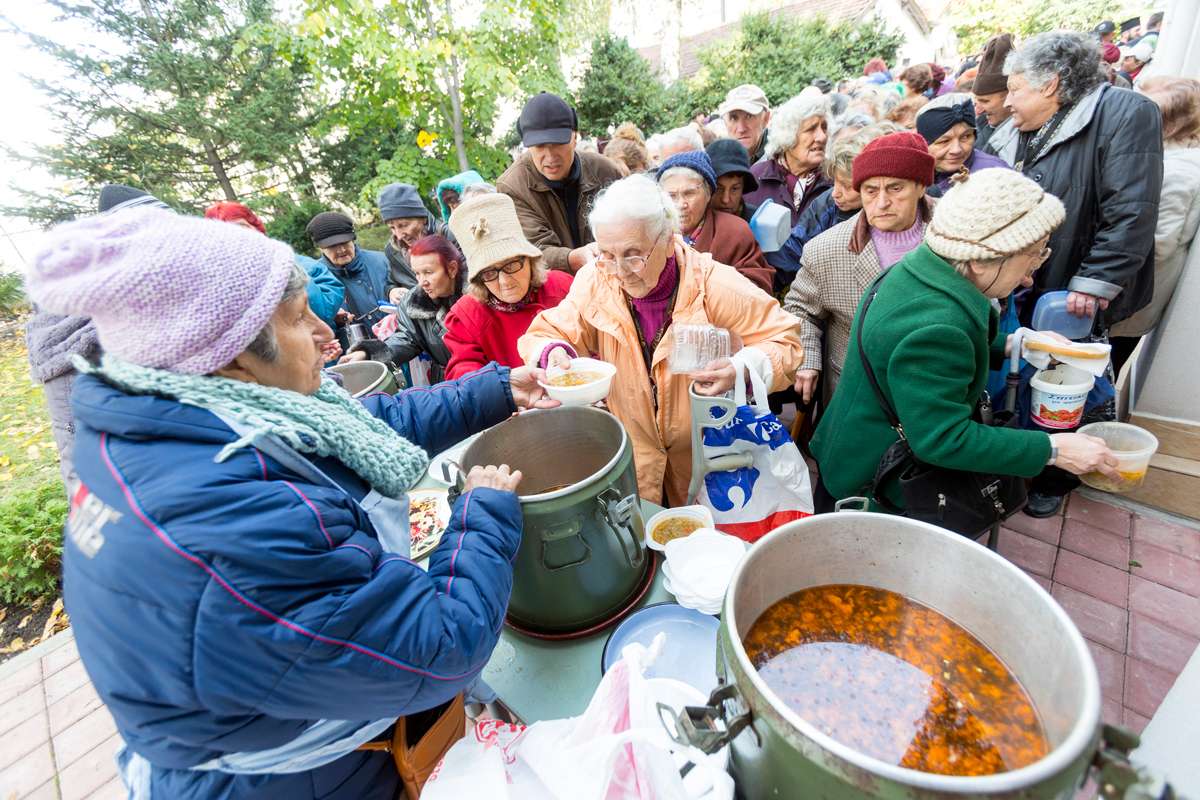 Americans are suffering from hunger and food insecurity at alarming rates. As a result, emergency food networks have expanded significantly across the United States since the early 1980s; they’ve also become more institutionalized. This trend is especially apparent in the 200 food banks operating under the Feeding America banner all over the U.S. The Feeding America network collectively recovered and redistributed 4.5 billion pounds of unsaleable food to 46.5 million people last year. Both numbers are trending upward, more than doubling over the past two decades.

Currently, revaluing—and redistributing—food that would otherwise be wasted to feed the hungry depends on a massive volunteer labor force working in food pantries and soup kitchens at the local level. According to Feeding America, which represents the majority of charitable food organizations in the U.S., 68 percent of the food pantries and 42 percent of hot meal programs in their network rely exclusively on unpaid labor.

Our research among these organizations in New York and West Virginia has found that volunteers are not only driven by compassion, but many are themselves facing hunger linked to a lack of secure employment. Some are required to volunteer in order to meet the work requirements for their Supplemental Nutrition Assistance Program (SNAP) benefits.

Many workers across the emergency food supply chain are deeply aware of these contradictions and understand that voluntary efforts alone cannot end hunger. A food bank director in West Virginia summed up frustration with the current state of emergency food by saying, “We’re just feeding the line, not shortening the line. We’re a short-term fix to a long-term problem.”

That’s where the Green New Deal (GND) enters the picture. The resolution calls for building a “more sustainable food system that ensures universal access to healthy food,” but the specifics of what that might look like in practice remain vague. And yet, seen in the right light, it may offer a framework to change the conversation around food charities and their role in addressing hunger. By establishing a federal jobs guarantee and regulating food waste, GND legislation could upend the persistence of food insecurity and poverty in the United States.

The Green New Deal as a Solution

One critical piece of the GND proposal is the call for a federal jobs guarantee, which would ensure living wages and strengthen worker rights. As economists William Darity, Derrick Hamilton, and Mark Paul have laid out, jobs programs could be federally funded but locally administered, creating employment opportunities that improve community well-being. A jobs guarantee would put pressure on private employers to match federal wage rates to keep or attract employees.

Food charities offer a viable example of where such a jobs program could have a major and immediate impact. Rather than relying on an unstable labor force of volunteers, anti-hunger organizations could pay those engaged in food waste recovery livable wages.

Because poverty would decline when a jobs program is implemented, the overall demand for emergency food would also decline, offering food charities renewed institutional stability that would allow them more time to concentrate their efforts on community food security projects, like community farms, composting projects, and agriculture-centered youth development programs that contribute to resilient and sustainable food systems. 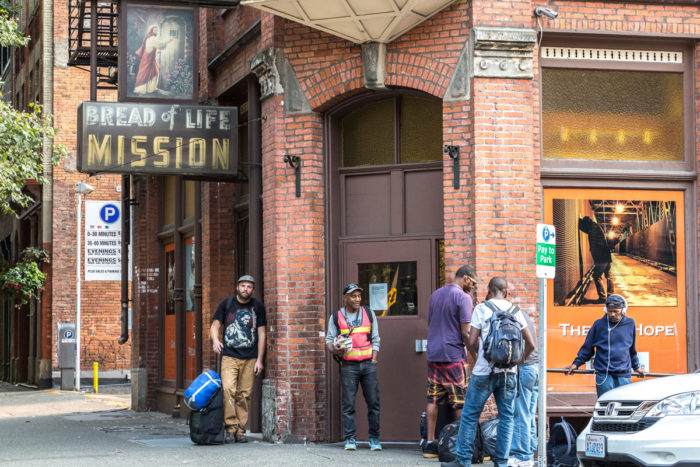 While a jobs guarantee would improve prosperity and reduce demand for food charity, the country must still address the crisis of overproduction and waste. In 2018, Feeding America processed $2.7 billion worth of tax-deductible receipts for some of the largest food corporations in the world—companies such as Walmart and Kroger—which frame their hunger-relief efforts as food waste reduction and environmental stewardship. But these companies bear virtually no responsibility for the ongoing production, sourcing, and labor practices that exacerbate both the food waste and poverty problems facing the U.S. today.

In place of tax breaks for large corporations, a GND should consider legislation modeled on the French food waste ban. Such laws would mandate that retailers and manufacturers redistribute their excess or face financial penalties, placing the responsibility on for-profit businesses to work across their supply chains to address the problem of overproduction and waste.

The public savings from ending tax incentives and any revenues levied from fines against businesses not addressing food waste would offset the $1.5 billion it would cost to pay for the 8.4 million volunteer hours that Feeding America estimates are needed to operate food charities across its network each month, even at a rate of $15 per hour.

As chronic hunger decreases, communities could then repurpose the food-banking infrastructure built up over the past 40 years—including warehouses, freezers, fridges, trucks, and food-processing operations—for use in building regional food economies based on agro-ecological principles. A recent open letter by the Agroecology Research-Action Collective spells out specific proposals to reduce greenhouse gas emissions associated with industrial agriculture and improve community well-being under the framework of a GND. [Editor’s note: One of the authors, Maggie Dickinson, is a signatory to the letter.]

Many food charities are already beginning to build connections with their allies in the local and regional food economy. For example, the Closing the Hunger Gap network is challenging food charities to consider their role in bringing about some of the deep social changes needed to enact a more just food system in the 21st century. However, the emergency food sector is limited by its reliance on volunteer labor, scraps from the industrial food system, and often unreliable grant funding.

For many people working in charitable food, the demand for a GND may seem far removed from the everyday and often frenetic work of addressing hunger. However, proposals to reform our food system and provide living wage jobs would make it possible for food charities currently operating in austere philanthropic environments to think beyond maintaining their volunteer labor force and scrambling to recover food from large firms.

The first New Deal attempted to reconcile breadlines knee-deep in wheat, but failed to address the fundamental contradictions between waste and want in our food system. A GND has the potential to do so. Food bank infrastructure and anti-hunger advocates should not be left out of the conversation; in fact, they can be key collaborators in the national effort toward revitalizing sustainable regional food systems that transform the line instead of just feeding it.

Food charities can be a powerful ally in the fight for a GND. Food banks have enormous reach and close relationships with their elected officials at all government levels, and the public views them as trusted experts on hunger and food insecurity.

Now is the time to mobilize that political capital in support of a GND, to eliminate insecure employment as the main driver of food insecurity in the U.S., and to employ people doing the important work of reducing food waste and building diversified regional food systems equipped to respond to the food-system shocks and upheavals that climate change is already creating.

Maggie Dickinson is cultural anthropologist and an Assistant Professor of Interdisciplinary Studies at CUNY's Guttman Community College. She is the author of the forthcoming book Feeding the Crisis: Care and Abandonment in America's Food Safety Net (UC Press 2019), which charts the dramatic expansion and reformulation of the food safety net in the 21st Century. By bringing the voices of food insecure families into national debates about welfare policy, her book offers fresh insights into how we can establish a right to food in the United States. Read more >

Joshua Lohnes recently defended a dissertation in geography at West Virginia University titled "The Food Bank Fix: Hunger, Capitalism and Humanitarian Reason." Drawing on a five-year institutional ethnography of food banking networks, his research explores the moral, political and economic place of charities in the wider food economy. He currently serves as the food policy research director in the Food Justice Lab developing action research projects through data sharing tools and planning resources that support food policy and anti-hunger coalitions in Appalachia. He is involved in a number of cooperative food projects, including Conscious Harvest Cooperative, a community food security collective that works to address food access gaps in Monongalia county. He is also a worker owner of FIRSTHAND cooperative, a coffee company that provides resources for building alternative economies in West Virginia and beyond. Josh grew up in France and now lives in Morgantown with his wife Jenna and three children Evie-Louise, Elias, and Jude. Read more >