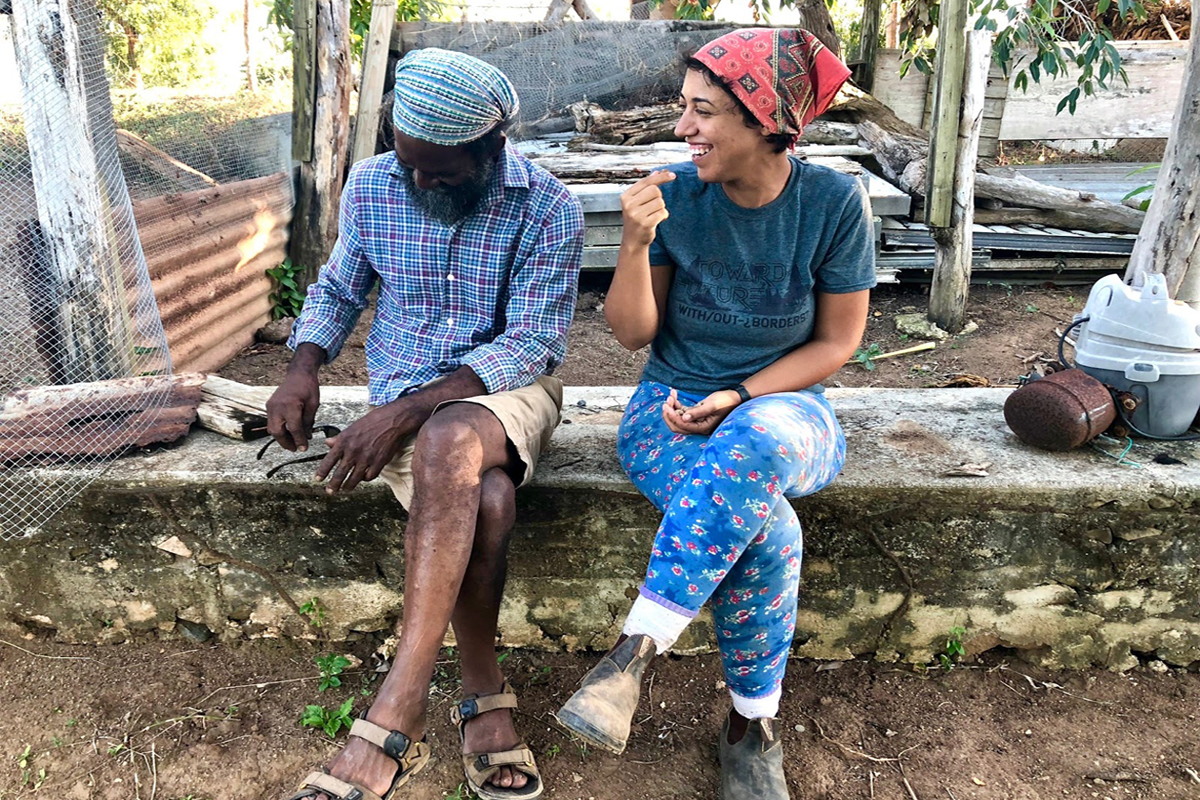 “You are not allergic to bees, right?” asks Ana Elisa Pérez Quintero, who helps run Finca Conciencia, the only agro-ecological farm on Vieques, an island located about seven miles off the east coast of Puerto Rico, before we enter the property through a heavy wooden gate.

The nine-cuerda (slightly over 8.5-acre) farm is perched on the top on the Monte Carlo neighborhood of the island. Scattered in between fruit and nut trees, beehives, and fallow land, Pérez Quintero and Jorge Cora grow organic vegetables on around 40 beds, laid out over two sides of a gently sloping hill. 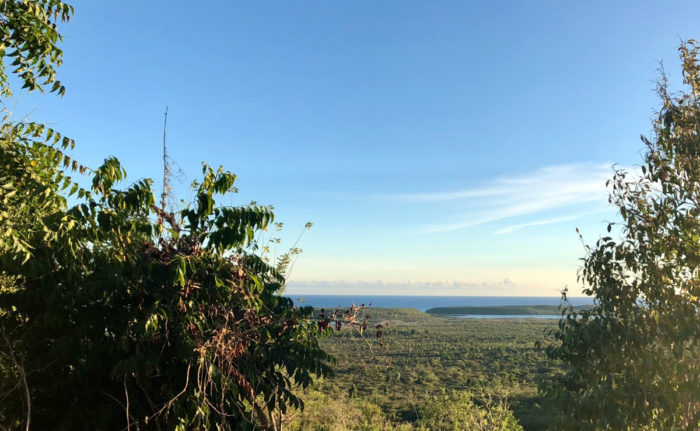 The view of the Caribbean Sea from the top of Finca Conciencia. (Photo © Sarah Sax)

Home to roughly 10,000 residents, Vieques has no major, commercial source of locally grown produce, so Finca Conciencia is trying to fill that gap and build a food sovereignty movement on the island. In addition to growing vegetables, they do that by keeping bees, giving workshops, saving seeds, and holding community kitchen events through a collective they formed in 2015 called La Colmena Cimarrona—the Maroon Beehive—a name that hints at their unique strain of runaway bees, their politics, and their own histories.

“If we can produce more ourselves and become more food sovereign, maybe that can lead to an awakening in the political sphere in Puerto Rico—and even more so in Vieques,” Pérez Quintero explains.

The half-dozen rustic buildings at various stages of disrepair, lined strategically at the highest point of the farm to catch the view of the Caribbean Sea in the distance, are a reminder of the devastating impact Hurricane Maria had when it tore through the island in 2017. While the farm is slowly rebuilding, its main focus is on growing vegetables for the farmers’ own consumption and to sell to restaurants on the island. 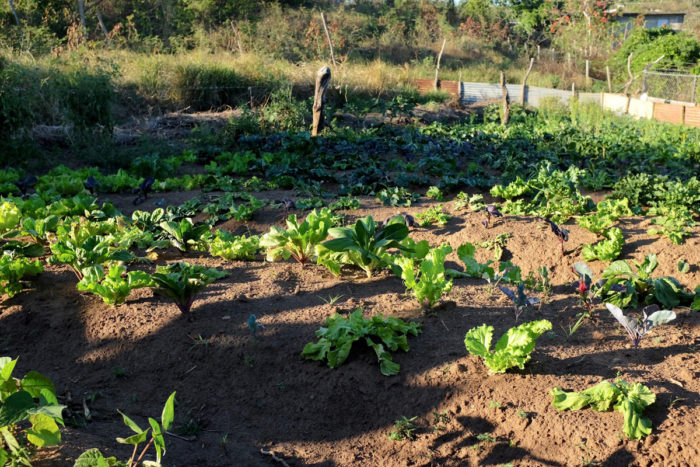 Most of the vegetables that Finca Conciencia sells are leafy greens. Many of them go to the island’s growing restaurant businesses. (Photo © Sarah Sax)

The 30,000-acre island has long struggled with food access and availability. Puerto Rico, which consistently ranks higher for food insecurity and hunger than most other parts of the U.S., imports roughly 85 percent of its food—that number jumped to 95 percent after Hurricane Maria. Food insecurity on Vieques is compounded even more by an irregular and unreliable ferry service. Earlier this spring, for instance, both cargo ferries to the island were broken, cutting off residents’ access to gas, milk, eggs, and fresh produce.

In addition to food insecurity stemming from its remoteness, Vieques has been battered in many ways over the years. The U.S. Navy used half of the island as a weapons test site for more than six decades before finally ending in 2003, eventually turning that half into a National Wildlife Refuge that is also a Superfund Site. And Hurricane María slammed into Puerto Rico in September 2017, killing 3,000 people and cutting off electricity, gas, food, and supplies for weeks to Vieques. 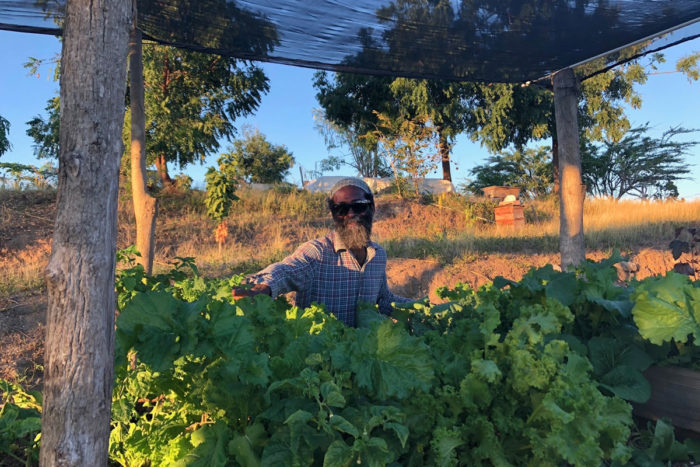 Jorge tends to lettuce grown under a shade net with beehives in the background. (Photo © Sarah Sax)

“What Jorge and Ana are doing is both unique and necessary,” says Sylvia de Marco, who runs a vegetarian boutique hotel on the island and sources greens and other produce from the farm. “Vieques has so much potential—we can grow year-round—it’s amazing not more people are doing it.”

Originally from the city of Arroyo, Puerto Rico, Cora has been working with bees since 1996. He came to Vieques to buy queens from his predecessor, Mike Diaz, after Hurricane George destroyed his hives in 1998, and he never went back home. Diaz gave the land to Cora when he retired, marking the start of Finca Conciencia, 12 years ago.

Pérez Quintano, also from Puerto Rico, arrived five years ago to participate in a workshop. Inspired by what Jorge was doing—and the very obvious need for more food sovereignty on the island—she decided to stay as well.

The “agro-api-artisanal farm,” still recovering from the Hurricane María, currently produces around 150 pounds of food per week, mainly green leafy vegetables that it sells to residents, restaurants, and hotels twice a week in the island’s port town of Esperanza. The farmers, and the day laborers who help work the land, consume the rest of their produce. 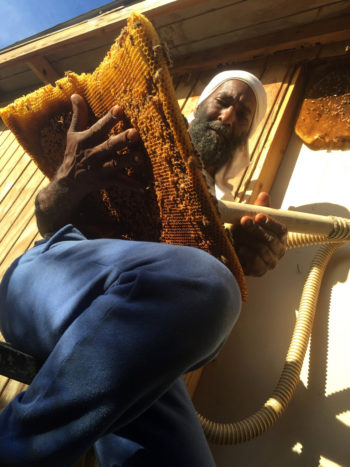 The farm is part of La Colmena Cimarrona, the larger collective that Pérez Quintano and Cora founded to create agroecology training opportunities, as well as provide administrative and fundraising support for like-minded organizations. In addition to teaching workshops on composting, organic farming, and seed-saving, the collective runs a community kitchen, community gardens, and a group for women working in food security. Its long-term goal is to train enough farmers around the island to eventually have a local farmers’ market.

The collective also runs an apiary, spearheaded by Cora, that raises Puerto Rico’s unique hybrid bees—a hybrid of “killer” African bees and a European strain that is gentle and resilient to many of the parasites that plague European honeybees. “They call them wild, or ‘killer’ bees,” says Pérez Quintero. “But they’re not. It’s the same kind of racist discourse that was used to describe indigenous and enslaved people.”

Cora, who has been developing different hives to keep the smaller, hybrid bees, agrees. “The bees are a hybrid, like us Puerto Ricans. You can’t manage the hybrid bees the same way you do European bees.”

Around 80 percent of the island’s 150,000 bee colonies were wiped out during Hurricane Maria. To save their dozen beehives during the storm, Pérez Quintero and Cora strapped them to pieces of wood and tied them to the sturdiest trees.

Since then, however, the apiculture side of their business has slowed down a bit as they focus their efforts on ramping up vegetable production. But both are adamant that there is no separating bees from agriculture. “We live inside of the bees; they are connected to everything we touch and eat and use,” Cora says. “We can’t live without them.”

‘Banks of Life’ and Seed Saving

I’ve come during the dry season, but even so, because of the winds, low rainfall, high levels of evapotranspiration, and lack of irrigation, farming on Vieques is a challenge.

“There isn’t much to see at the moment,” says Cora. “On the main island, the earth is productive when it rains, but in Vieques it’s harder—the soil is drier, and the rain is less. In reality, the climate here is more like a desert.”

To get around that, Cora developed a type of narrow, long, raised vegetable beds based loosely on traditional farming techniques used by the indigenous Taíno, in which long furrows collect and hold water when it rains. They look similar to double-dug beds used in bio-intensive agriculture, but they are longer and higher. The farm doesn’t adhere strictly to any one system, but is adamant about not using agrochemicals or industrial techniques. 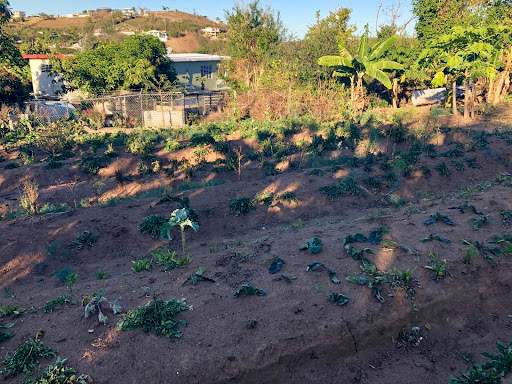 The beds are designed to retain as much water as possible. (Photo © Sarah Sax)

“We call these ‘banks of life,’” says Pérez Quintano. “During the hurricane, for the most part they stayed intact,” even if much of their farm didn’t. 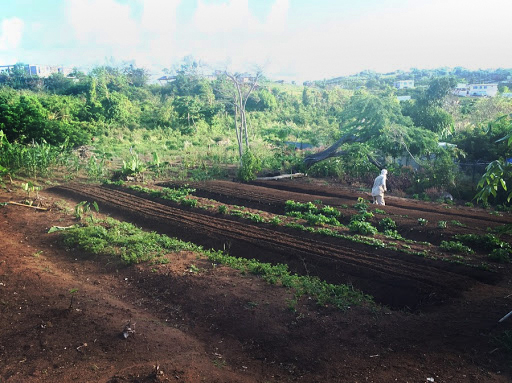 A view of the farm’s double-dug beds. (Photo courtesy of Finca Conciencia)

About half the beds are currently growing leafy greens, eggplants, and peppers, and the other half is going to seed. Pérez Quintero has been dedicating herself to generating seeds that are locally adapted to the conditions in Vieques since she came to the farm five years ago—both to lessen dependence on outside sources and to generate seeds that will flourish in the unique local climate and soil conditions of the islands. For now, the seeds are mainly used on the farm and exchanged at the workshops the farm regularly holds.

In the Wake of Natural Disaster

Recovery from Hurricane Maria was even harder for Vieques than for the rest of Puerto Rico; electricity didn’t fully return there until January 2019, and the hospital still operates some of its services out of trailers.

“We effectively had no health services, no dialysis, [and] no diabetes medication after the hurricane,” remembers Pérez Quintero. “It was a real crisis.”

Despite the damage the farm took from the hurricane, access to fresh food wasn’t as much of an issue. They harvested everything they could and distributed some of the provisions, built a model garden at the Catholic church, and started a women’s group through the collective to work on food security and health issues.

Pérez Quintero and Cora saw Maria as a way to bring awareness to the issue of generating more food security on the island. “That’s what we want to tell the people here,” Cora says. “There are going to be more times where there is no ferry and no food—and they have to be prepared.”

Food Sovereignty as a Political Statement

The land on which Finca Conciencia is built is what is known locally as “rescued land,” or land that belonged to the Navy but was overgrown and not in use. Residents like Cora’s predecessor Mike Diaz came and cleared the land, effectively laying claim to it. 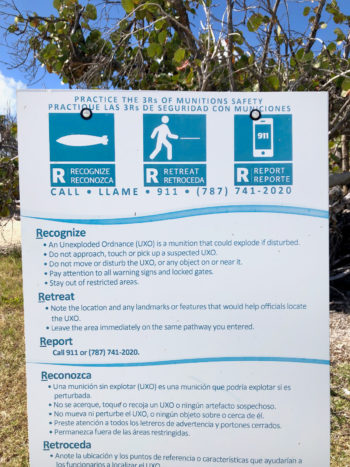 A sign in the reserve below Finca Conciencia reminds visitors that Vieques was used for 60 years for war games by the U.S. Navy. (Click image for a larger version) (Photo © Sarah Sax)

While that land is recognized by the government, it has no clear titles, making it easy for people to claim and sell it. The most lucrative buyers are eyeing land for hotels and vacation homes for one of Vieques’ main industries: tourism. Because the island was inaccessible for so long, development has been slow, making it a paradise for off-the-beaten-track travelers. The surge in wealthy, absentee owners, however, means that prices for land have skyrocketed and buying land for farming has become all but impossible.

For Pérez Quintero and Cora, the history of Vieques ties in with what they are trying to do today with their farm. La Colmena is in the process of setting up a community land trust to claim some of the remaining, unsold land to use for food production.

“Agroecology and agriculture in general is, in its own way, a way to rescue Vieques from the gentrification, land speculation, and displacement that we are seeing,” Pérez Quintero explains. “We have a lot of absentee owners—we need more people that are actually here in order to change things.”

Finca Conciencia and its associated collective hopes that its work will advance social, economic, and environmental justice and sensitize people to the issue of food—and political—sovereignty.

One of the anecdotes Pérez Quintero likes to tell is from just after the hurricane. The farm had started a soup kitchen using radishes and arugula, ingredients that produce rapidly, “things that before the hurricane people would have potentially found gross,” she says. After eating canned food for weeks and seeing little aid and help from elsewhere, one of the men on the island turned to her and said, “Look, I’m not actively fighting for independence right now, but I think we need more of it.”

That seems to be the essential mantra of the farm: To free ourselves, we have to feed ourselves.

“It’s not an easy way to make a living,” Cora concedes, sitting and watching the Caribbean Sea break on white sand beaches in the distance. “But someone had to show that it could be done. And we’ve done that—aquí estamos—we are showing that it is possible. And that’s not nothing.”