The author of a new book explains how beef consolidation in the late 19th Century shaped the ecology, economy, and even U.S. politics—and continues to do so today. 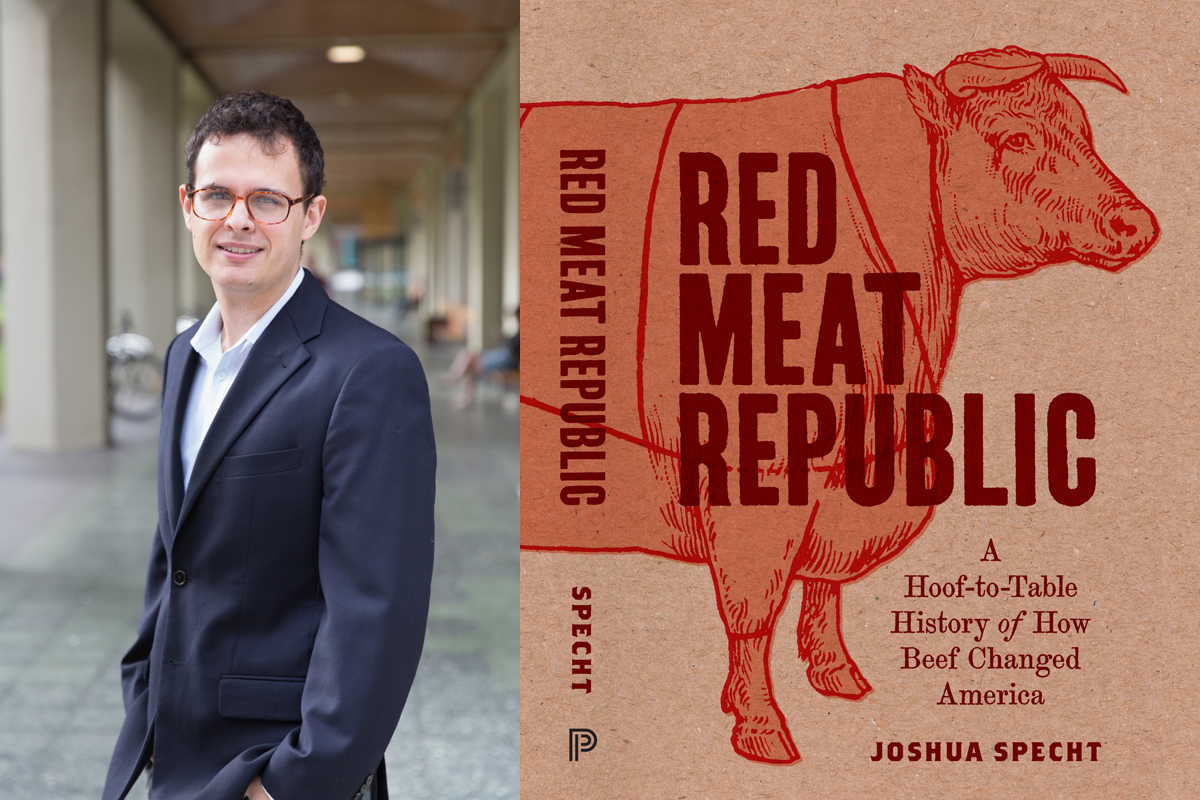 “America made modern beef at the same time that beef made America modern,” writes Joshua Specht in the introduction of Red Meat Republic: A Hoof-to-Table History of How Beef Changed America. Beginning with the development of cattle ranching in the Great Plains and the western United States—a development contingent upon the removal of thousands of Native American communities—Red Meat Republic describes the emergence of what he calls the “cattle-beef complex” in the latter half of the 19th Century. The book details beef’s rise as commodity, from the importance of the open range and technological advancements like refrigerated railcars to the rise of meatpackers as powerful market players.

For Specht, a historian of 19th-Century America currently based at Monash University in Melbourne, Australia, Red Meat Republic grew out of his doctoral dissertation at Harvard—as well as out of a realization that a lot of the food writing he admired—Michael Pollan’s Omnivore’s Dilemma, for instance—wasn’t all that historical. “I don’t mean that as a dig,” he says, “but it seemed like there was room to look more in-depth at the history of industrial beef.”

So, Specht started looking through 19th-Century sources to tell the story of how “between 1870 and 1900, western cattle markets evolved from a series of regional centers into an integrated national system.” The result is a detailed look at the development of a national system built around beef that touches on persistent questions about the limits of consumer politics and debates over centralization versus localism.

Civil Eats spoke with Specht about the book, the lack of competition among meat producers, and what the origins of industry can tell us about our food politics today.

You write about how the idea of the open range transformed the ecological possibilities of the Great Plains. How did that happen?

There was this idea of this vast, empty land waiting to be populated with cattle. That’s basically a myth. There were obviously [Native Americans] living there and there were also bison. In order to have the land that the entire American beef industry is predicated on actually required a process of dispossession and near-extinction of the bison.

In your book, you write about the aftermath of the Mexican-American War and the eventual movement of tribes such as the Kiowa, Comanche, and Plains Apache into reservations. Why was the reservation system so important to the development of cattle ranching?

Ninety-five percent of western lands were acquired through the dispossession of American Indian land and the creation of reservations. The ranchers, indirectly, along with the U.S. military, directly engaged in a process of eliminating the means of subsistence of Native Americans by killing off the bison. Once they were confined to reservations, they didn’t have good ways to support themselves. The land was bad, there wasn’t enough of it, and their traditional ways of supporting themselves were gone, so they needed handouts of food. Often that was beef from cattle that were now grazing on land that once belonged to them. Reservations became a major outlet for cattle for ranchers, and often they got their lowest quality animals. Ranchers also got lucrative contracts to distribute cattle to reservations.

You describe beef as the paradigmatic business for the rise of agribusiness. How so?

In the late 19th Century, there was a basic tension between the unpredictability of nature—to oversimplify a bit—and the needs of business and capital. That tension led to a lot of crises, and in response the industry developed a model where the highly capitalized and valuable parts of the industry were the food processors that then relied on relatively small-scale suppliers in the form of farmers and ranchers. That allowed the food processors and meatpackers to offload the risk and capture profits in a reliable way. This model—which was pioneered in the 1880s—was repeated and intensified throughout the 20th Century.

You also explore how the democratization of beef, where beef could be part of every American’s diet, also meant that a person’s class began to correspond to which part of the animal they consumed. What did you learn?

Part of what I wanted to show is how we can debate the benefits of more expensive kinds of organic foods, but we have to be aware that not everybody can actually afford those. If we’re not pairing better quality, organic foods with a system that changes how everyone can afford food, then we have to be aware of the class implications. If I’m continuing to eat my steak, even if it’s produced more sustainably, I’m still contributing to the idea that to be successful is to consume beef. The book is trying to push [the idea] that all these questions of politics are tied up in our food decisions.

Your book describes two specific reforms in the early 20th Century, the Federal Meat Inspection Act (1906), and the Packers and Stockyards Act (1921). The former addressed sanitation and the latter attempted to break up the beef trust, right?

The Federal Meat Inspection Act of 1906 was a major victory from a consumer health/sanitation perspective, but one of the ironies I note in the book is that from the perspective of consumer politics, success in sanitation short-circuited consumer awareness of, and mobilization about, the system’s broader iniquities, such as labor exploitation, environmental degradation, and animal abuse.

The Packers and Stockyards Act of 1921 protected a certain kind of competition in meatpacking, but sought to ensure competition between the few very large firms that remained as of 1921. This legitimized the national/beef industry [or beef-industrial complex], as a natural state of affairs and it helped solidify a system that I argue was never inevitable—one in which centralized food processors dominated over relatively weak ranchers and retail butchers. Basically it stopped the big meatpackers from [consolidating further for a period of time], but it didn’t punish them for it, or try to turn back the clock. It closed the barn door after the animals had already left.

You argue that this federal regulation created a baseline for what was acceptable in the industry, correct?

Yeah. It’s the same story I tell about slaughterhouse labor. Initially, there weren’t unions in meatpacking, though there were attempts. By the time [workers] did form unions, it was a great development, but at the same time unions secured a picture of the industry that was already highly exploitative, unfortunately.

The national system that developed during this time, from roughly 1865 to 1906, seemed not so different from the one we have today, where meatpackers ran on immigrant labor and big corporations wielded a lot of power. Is that a fair claim to make?

For sure. Back then, workers in the slaughterhouse were poorly paid and were recent immigrants. The only difference is that they were from Central and Eastern Europe [as opposed to Latin America, as they are today]. But all the dynamics are the same. The other thing I should stress is that a national market emerged historically in specific places like Chicago, Texas, and the cattle towns of Kansas. Today, the beef industry exists in specific parts of the country but it’s bigger than any one of them and that’s partly how it’s so powerful.

You discuss Philip Danforth Amour, the meatpacking industrialist, and his view that the history of beef production was just a history of technology. Could you talk about this narrative and how it preempts criticism of the industry?

That argument was used by Philip Danforth Armour when he testified to the United States Senate in the very late 1880s and it was taken up by the first great historian of the meatpacking industry, Rudolph Alexander Clemen. He argues that the story of beef is simply a history of technological achievement through advancements like railroads and refrigerated railcars. The problem with this narrative is it doesn’t explain who benefits from this system and who bears its costs, which is a story of political struggle. My book is an attempt to retell a story, which is not wrong but incomplete—to reassert the politics.

What else does the origins of this industry tell us about the current state of food politics?

The history of beef helps us think about food politics in the United States today. One of the implicit insights of my book is that addressing the inequities of the food system today will raise the cost of beef. The entire system has been organized to minimize costs, so any change is going to make beef more expensive.

This speaks to the limits of consumerist politics, which is very good at addressing issues like cost and sanitation that affect us, the consumers, directly. But the only way to change the system equitably will involve a long-term shift over the place of beef in people’s diets. It also requires pairing environmental justice with social or redistributive justice. In order to fairly address the inequities within the beef industry, we need to make everyone able to afford better-produced food. I view that as kind of a call to coalition building in terms of food politics.

But beef production is also expanding globally at an incredible rate. Looking at the moments of origin can also help us think about places like Brazil, where beef production is really taking off [resulting both in the displacement of indigenous people and the deforestation of the Amazon]. Some of the dynamics I see in the early stage of my story are currently unfolding in the contemporary world.

The biggest beef processor in the world now is JBS, a Brazilian company, which has bought up some of the American companies over the past 30 years. The U.S. is a meaningful beef exporter, but similar production systems are being set up elsewhere around the world. The same story that says to be successful in America is to eat beef means it’s successful in a poorer economy to eat beef. Meat consumption remains a marker of American lifestyle and success. Even if I’m consuming a far more sustainable steak, I’m still contributing to the idea that to be successful means to consume beef.

Jamison Pfeifer is a freelance researcher and writer based in New York; his work has appeared in Chicago Magazine, High Country News, and more. Read more >