Under-appreciated dung beetles could prevent outbreaks like E. coli in farm fields. Scientists are working to find out for sure—if they don't disappear first. 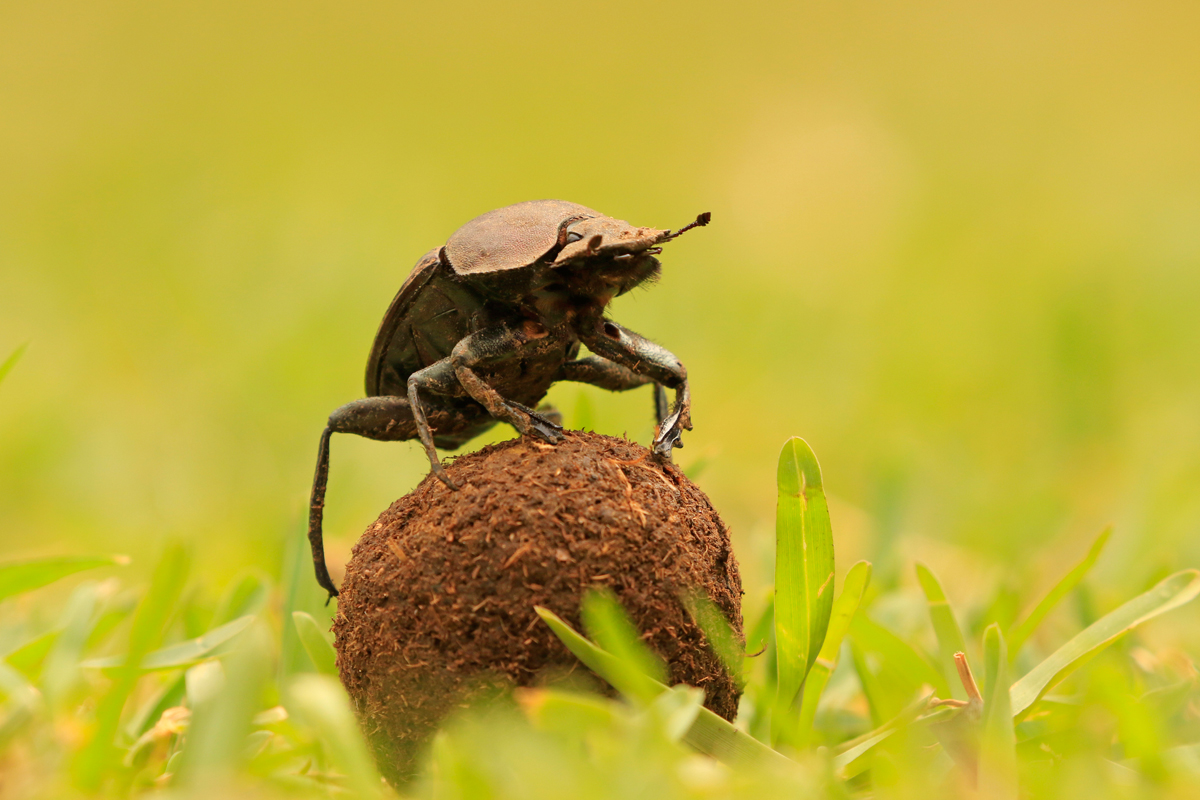 Dung beetles—named for what they eat—may be one of the more underrated creatures in the food web. When no one is looking, these tiny janitors clean up pound after pound of manure on pastures, enriching the soil as they spread and bury it. Now, there’s evidence that dung beetles may also help make our food safer—even as food-safety fears make it difficult for researchers to find farms willing to help conduct real-world tests.

In 2013, Matt Jones, a doctoral student from Washington State University, approached dozens of West Coast produce farmers, both organic and conventional, with an unusual request. He wanted them to apply pig feces to broccoli fields to study whether dung beetles and other soil organisms were able to reduce food-borne pathogens.

While roughly 50 farmers declined, ironically because it introduced too much risk to their operation, the 43 farms that took part in the experiment helped demonstrate that greater biodiversity, including both dung beetles and soil microbial communities, suppressed E. coli and other harmful pathogens. In addition, a seven-day laboratory experiment revealed that two dung beetle species reduced E. coli numbers by over 90 percent and nearly 50 percent, respectively.

The reason? These beetles efficiently transported feces belowground, making it difficult for pathogens to survive, especially in the presence of diverse soil microbial communities.

“Our study doesn’t say that if you have dung beetles and diverse soils, you’re all good,” says Jones. Rather, he says, it shows that “rich biodiversity is a tool,” and one that has likely been underappreciated.

Many of the 6,000 species of dung beetles worldwide are tunnelers (while most of the others are “rollers”). As tunnelers work their way into the soil, they can carry up to 90 percent of the nitrogen from cattle dung with them. In doing so, they also improve the soil and help it absorb more water. As a result, less nitrogen pollution runs off farm fields, creating fewer dead zones in waterways and oceans. A 1,000-pound beef cow can produce roughly 10 tons of manure each year. Without effective dung removal, pastures can inhibit plant growth and increase pests.

“Dung beetles are a crucial element of natural and managed systems that involve livestock,” says John Lundgren, an agroecologist and director of the Ecdysis Foundation, a non-profit, independent laboratory in Estelline, South Dakota. His recent study found that a diverse belowground community quickly degrades manure.

“Those systems cannot function without dung beetles and other dung invertebrates,” Lundgren told Civil Eats. And yet, alarmingly, populations of dung beetles are declining on industrially farmed land—particularly on farms that rely on insecticides to control livestock parasites in cattle. (They’re just one of many insect species facing unknown futures)

As Lundgren sees it, we have lost the biodiversity that used to keep pest species in check—before we had the technology to fully document their roles.

Perhaps not surprisingly, dung beetles are prized in many livestock rearing operations—particularly for their biocontrol of dung-breeding flies and their ability to reduce the development and survival of gastrointestinal parasites in pasture-raised cattle and sheep. In fact, large-scale efforts to incorporate dung beetles are underway, with their respective governments’ backing, in Australia and New Zealand. Shaun Forgie, co-founder of Dung Beetle Innovations Ltd, is growing his company’s capacity to deliver dung beetle colonies as part of a government-backed national release strategy that aims to benefit New Zealand’s 46,000 livestock farms.

“We brought non-native livestock here and exotic grasses to feed them, minus the organisms to get rid of their shit rapidly,” Forgie says. Many decades of intensified farming, he adds, contributed greatly to the contamination of 90 percent of the country’s rivers and lakes with sediments, nutrients, chemicals and disease pathogens, including E. coli. “We want a low-cost solution that can reduce contamination and improve water quality,” he says, “while improving soil health and pasture productivity.”

Researchers in Australia, home to 80 million tons of livestock dung annually, demonstrated last year that dung beetles offer $1 billion in economic benefits. Industry and government groups have since joined forces on a $23 million project to further document the potential environmental and economic benefits of dung beetles.

Dung Beetles and Biodiversity in the U.S.

Few studies have assessed the value of dung beetles on row crop production. And yet, in California’s Central Coast, a region that supplies more than 70 percent of the country’s salad vegetables, they could turn out to be an important part of a decade-long discussion about the value of diverse ecosystems on food safety.

Ever since the 2006 multistate E. coli outbreak in spinach, risk-averse food buyers for big companies have often reacted to contamination events by putting in place additional, sometimes costly, requirements to manage wildlife on farms—such as removing all non-crop vegetation. These measures to make farm fields as sterile as possible have often led to reduced wildlife habitat and other losses to biodiversity. And that fact has led Washington State’s Matt Jones and University of California at Berkeley researcher Daniel Karp to explore the ways that farmers can best harness, rather than eliminate, biodiversity to reduce pathogens.

In a previously published paper, they showed that manure-based compost can be applied safely and that habitat removal is likely ineffective at mitigating food safety risk. In fact, Karp also demonstrated that removing nearby non-crop vegetation such as riparian areas or meadows, could increase, rather than decrease, pathogen numbers in the field. “This [new paper] is just the tip of the iceberg,” says Jones. “We still have a lot to learn about community ecology and disease dynamics.”

Liz Nichols, a dung beetle expert and conservation biologist at Swarthmore College, agrees. “It’s high time that we learn how to describe the full suite of landscape impacts and on-farm impacts from different management practices,” she says. Much like research has put a price tag on pollination services, quantifying dung-beetle-managed health-related services is a worthy long-term goal—especially when they will likely find economic and practical reasons to maintain biodiversity, she adds.

“We need more studies occurring in the real world with real infectious disease agents, like E. coli or hookworm, and other kinds of livestock,” says Nichols. If such a sustained effort could get underway, Nichols’ believes scientists could unearth some general principles about infectious disease ecology. “It’s the most exciting thing we need to do in dung beetle research,” she says.

But Jones’ study made another thing clear—growers’ food safety concerns can complicate efforts to study food safety. “The stakes are so high for farmers. The molecular techniques for tracing a foodborne pathogen outbreak are so good, that if it gets traced back to your land, the repercussions are enormous,” says Jones.

Back in 2006, contaminated spinach killed three and sickened over 200 people. Michele Jay-Russell, a research microbiologist at the Western Center for Food Safety in California, helped trace the E. coli O157:H7 strain to river water, cattle feces, and wild-pig feces on a single farm.

“These are very serious outcomes—there’s not a lot consumers can do if produce that is washed and prebagged is contaminated,” says Jay-Russell. For farmers, however, “it becomes critical that plants don’t get contaminated [with animal fecal material] in the field. And there’s no one solution to that.”

Multiple levels of regulations followed the spinach outbreak. The U.S. Food and Drug Administration (FDA) required farmers to monitor their crops for animal contamination, yet they stopped short of requiring the removal of habitat or fencing out of wildlife. Still, a 2016 survey of 588 farms conducted by Patrick Baur, a food systems researcher at University of California at Berkeley, found that habitat was being removed due specifically to buyer food safety concerns—despite FDA guidelines.

For these reasons, farmers have little incentive to invite food safety researchers to study their operations. Baur can make 100 phone calls just to find roughly five growers willing to be interviewed about how industry demands impact their safety practices.

“Nobody’s that excited to point out the ways in which they think food safety protocols aren’t working on their operation, even though they’re the only ones who really know what is and isn’t working well,” says Baur. He theorizes that producers don’t want to talk about food safety because there is not a safe forum to talk openly, without fear of incurring some liability or reputational or regulatory risk.

“There are very few farmers willing to open their properties to researchers,” agrees Jay-Russell, adding she is grateful for those who help.

According to the Centers for Disease Control, one out of six people will be affected by foodborne illness. Unfortunately, says Jay-Russell, food safety research funding has declined in recent years. “I love the dung beetle work, but it alone won’t solve the problem ultimately,” she adds. “We need multi-regional studies to get a better idea of the risks related to water, soil amendments, or animal intrusions.” Yet Jones suggests the more difficult part is doing research that asks the right questions in the field, on real farms.

Despite their reticence to participate in studies, growers are hungry for data-driven recommendations­—about dung beetles and otherwise—says Jones. Despite his rocky start recruiting farmers, many more joined his project after seeing a presentation of his first field season results. Anything researchers can do to help farmers grow food sustainably while keeping consumers safe merits attention, he says.