At issue is USDA's longstanding practice of shielding how much money retailers, including big box stores like Walmart, make from SNAP. 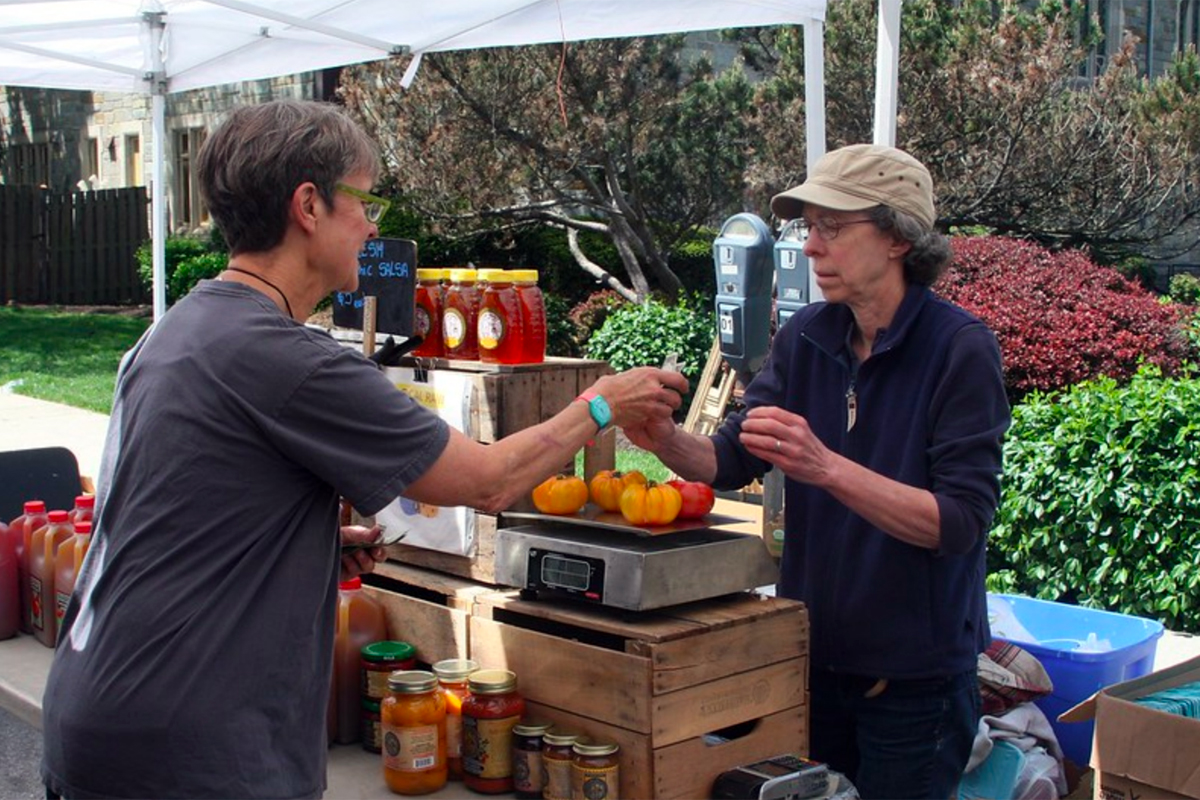 (Update, on June 24, the Supreme Court ruled 6-3 against the Argus-Leader, limiting public and media access to government records such as store-level SNAP sales data. Writing for the dissent, Justice Stephen Breyer noted, “The whole point of FOIA is to give the public access to information it cannot otherwise obtain. So the fact that private actors have ‘customarily and actually treated’ commercial information as secret … cannot be enough to justify nondisclosure…. I fear the majority’s reading will deprive the public of information for reasons no better than convenience, skittishness, or bureaucratic inertia.”)

Open for business every Sunday between the hours of 10 a.m. and 2 p.m., the Takoma Park farmers’ market makes it easy for recipients of food-assistance benefits—including Maryland’s Independence Card, and Washington, D.C.’s DC EBT card—to shop for healthy food.

At the center of market, surrounded by farmers’ stands, a high school student runs table where shoppers can swipe their cards to convert Supplemental Nutrition Assistance Program (SNAP) dollars into tokens that they can use to buy locally grown produce and pasture-raised meats from the market’s dozen or more vendors.

Although the market will match SNAP users’ first $5 dollars, less than 1 percent of its 2,000 or more Sunday visitors are SNAP shoppers. Even at larger markets that match more SNAP funds, in Maryland and around the country, farmers’ markets are distant competitors to the roughly 250,000 big food retailers authorized by the U.S. Department of Agriculture’s (USDA) to accept SNAP funds for purchases. While the 3,600 authorized farmers’ markets nationwide redeemed nearly $16 million in SNAP benefits in 2017, the nearly 51,000 authorized grocery stores, supermarkets, and superstores redeemed nearly $52.7 billion in SNAP benefits through the program. 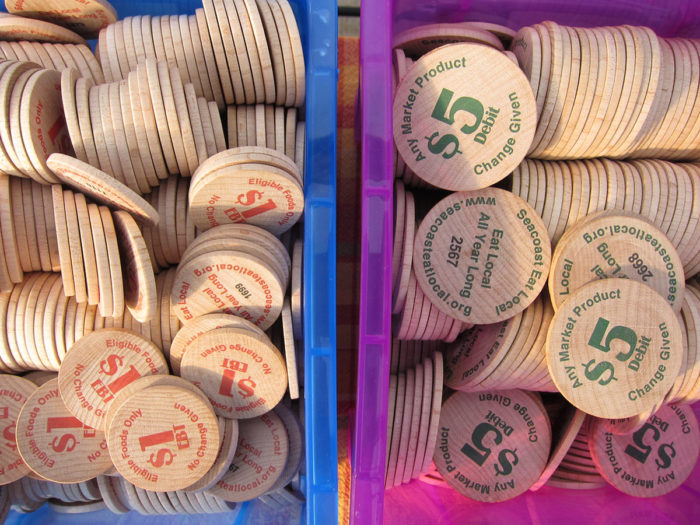 The USDA has refused to share with the public the individual SNAP sales data from those food retailers, although the outcome of arguments before the U.S. Supreme Court this session could raise the curtain on that information. Some advocates hope to shine a light on just how much companies like Kroger and Walmart are benefiting financially from the SNAP program, while also employing many SNAP users. If made public, this data might offer a clearer picture of the challenges associated with food access across the country.

The case, Food Marketing Institute v. Argus Leader Media, pits the trade association for chain and independent food retailers against the Sioux Falls, S.D.-based Argus Leader newspaper. The case has been brewing since 2011, and in its oral arguments the Food Marketing Institute (FMI) asked the Supreme Court to reverse a November 2016 district court decision that, under the Freedom of Information Act (FOIA), required the USDA to disclose individual store sales data on its retailers authorized to accept SNAP funds for purchases.

In the wake of two decisions in favor of the Argus Leader, the USDA in January 2017 announced that it would comply with the court ruling and promptly begin releasing the data to the public. The FMI then intervened, first taking the case to the U.S. Court of Appeals, then appealing its loss there to the Supreme Court. In its opening statement, the FMI asked the Court to reverse the decision and keep its members’ SNAP food sales confidential.

“Our injury in fact is the disclosure of our members’ store-level sales information that they keep secret,” argued Evan Young, an attorney for the FMI, which represents 33,000 retail food stores and 12,000 pharmacies. Young, along with an attorney for the Department of Justice, told the nation’s highest court that retail sales from taxpayer-funded SNAP should be considered trade secrets and confidential financial data that the USDA, in their more than four-decade long partnership with retailers, has to date agreed not to disclose.

“We are exercising our discretion in a matter of good government,” Anthony Yang, Department of Justice (DOJ) assistant to the solicitor general, told the Court. “The government is trying to keep its word, given over 40 years, in the most official form possible, that we’re going to keep this information confidential.”

“How the government spends its own money is critical information that the press and the public need to know,” Richard Loeb, attorney for the newspaper told the Court. “It’s the type of information that FOIA has been used for decades to reveal.”

The USDA has said that FOIA exemptions prohibit it from disclosing data that retailers have shared with the agency in confidence. But since the information the newspaper has requested is automatically stored in USDA’s Store Tracking and Redemption database, the Argus Leader says USDA’s argument is misleading.

“USDA’s imprecise use of the term ‘redemption data’ … creates the misimpression that USDA must depend on retailers to furnish SNAP payment information,” the Argus Leader wrote in court filings. Further, the newspaper’s lawyers say the agency’s claims are “disingenuous” since it already has the data.

SNAP Fights Hunger, but Should it Also Support Healthy Eating?

The difference between using SNAP for purchases at farmers’ markets and using them at a Walmart Supercenter are significant—farmers’ markets rarely offer much in the way of processed, packaged foods. And while the overarching goal of SNAP is to reduce food insecurity, there’s a growing interest in simultaneously improving people’s health. Governments and health advocates at all levels are increasingly advocating the design of food assistance programs that will boost nutrition, improve health, and maybe even reduce the cost of healthcare associated with the chronic illnesses that arise from an unhealthy diet.

To food access advocates, keeping secret the data about where SNAP dollars are being spent doesn’t make sense.

Takoma Park and other Maryland farmers’ markets receive funding through statewide grants, partnerships with private business and fundraisers at individual markets like Takoma Park’s annual pie contest. Despite the fact that Maryland has among the highest per capita household income in the country, as many as one out of eight residents experience food insecurity. Food access advocates have been active in developing programming that promotes greater consumption of healthier foods by creating incentives for SNAP shoppers at individual farmers’ markets and say they don’t keep their work a secret.

“It’s very unfortunate when we have a program that’s fairly transparent [while] large food retailers don’t have to share the same amount of information,” said Amy Crone, founder and executive director of the Maryland Farmers Market Association (MDFMA). 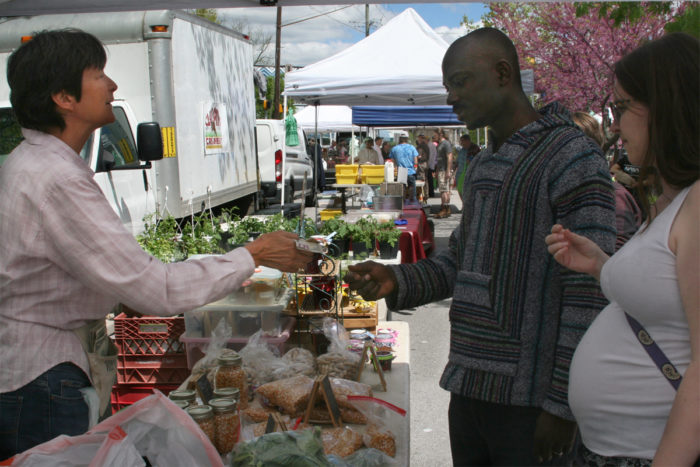 At the Takoma Park farmers’ market. (Photo by Cassie Chew)

Since 2014, Crone and the MDFMA have raised more than $700,000 in funding, which they’ve used to increase food access and farmer sales through its statewide farmers’ market matching program for SNAP shoppers.

“We found that 90 percent of SNAP shopper purchases go toward fruits and vegetables,” Crone said. “We know our incentive program is making a difference.”

With a $65 billion budget supporting food purchases of 40 million people in 2018, roughly one out of every seven Americans, food access advocates and scholars at the intersection of agriculture, economics, and policy have long wanted to use SNAP to improve health status among individuals at the lower end of the economy.

Getting more data on nationwide SNAP purchases could help achieve that goal. In its 2011 FOIA request, the Argus Leader asked for five years of store-level data; two years prior, the USDA’s own research suggested more data on consumers’ connection to stores would improve analysis of the availability of nutritious food.

“The data would definitely help, so that we can incentivize healthy eating,” said Crone.

Experts at the intersection of food access and health say there needs to be greater innovation in food assistance policy.

“SNAP is an effective program for reducing hunger in the United States … Yet, compared with both income-eligible nonparticipants and higher-income individuals, SNAP beneficiaries have significant disparities in diet quality and diet-related health outcomes,” wrote cardiologist Dariush Mozaffarian and two of his colleagues at Tufts University Friedman School of Nutrition Science & Policy in a March 2019 paper published in JAMA.

Expressing disappointment with what he says is a lack of SNAP policy innovation in the 2018 Farm Bill, Mozaffarian wrote that the current $1 per person per year food insecurity nutrition incentive (FINI) grant program that subsidizes low-income Americans’ produce purchases is too low.

“Expanding FINI to allow a 30 percent subsidy for all SNAP fruit and vegetable purchases would have cost $11.5 billion over five years—a far larger expenditure, but one that is estimated, based on a modeling study, to be cost-effective over a lifetime for reducing cardiometabolic diseases.”

“It seems to me it is useful to understand all of the retailers in the vicinity of where people live. We spend a lot of time thinking about how far it is to the closest supermarket, but I often find myself curious about how far do people travel to the supermarket that’s actually getting a lot of their business. So you can see how knowing the SNAP sales is potentially helpful,” said Wilde, who focuses on U.S. food and nutrition policy, consumer economics, and federal food assistance programs.

What We Learned from the Supreme Court

With the disclosure of SNAP retailer sales data hinging on how the court interprets FOIA exemptions, it is unclear how the Court, with its conservative majority, might rule on the case.

Conservative justices on the Court were less active in their questioning. Justice Neil Gorsuch asked the attorney for the Argus Leader for greater insight into how the word “confidential” has been interpreted in the prior cases and Justice Brett Kavanaugh asked the DOJ attorney about the legal threshold for keeping the sales data from disclosure.

“Can it be deemed confidential even in cases without government assurance?” Kavanaugh asked, exploring the potentially broader implications of the Court’s decision. 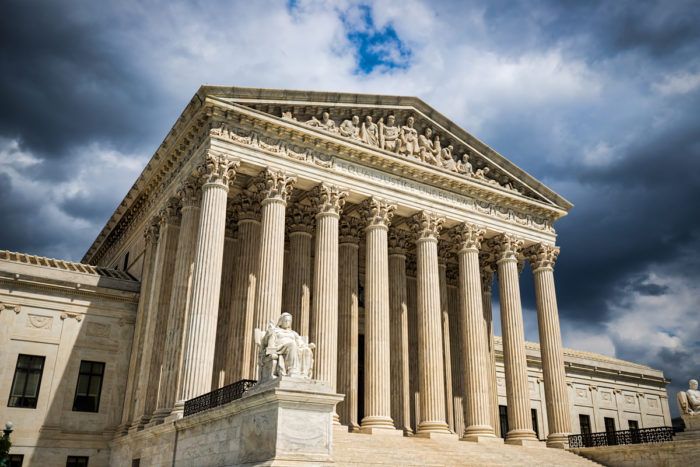 In one of her questions to Young, Justice Ruth Bader Ginsburg discussed whether the USDA can avoid sharing the data just because of its agreement with retailers. “To say the government can control this by making a promise that it won’t disclose, that seems to run counter to the whole idea of FOIA,” she said.

Justice Sonia Sotomayor, the most active in questioning the attorneys, reminded the attorney for FMI and DOJ that the USDA has lost two prior cases for keeping retail data confidential, and asked whether FMI had standing in the case—the requirement to bring a lawsuit in court based upon a stake in the outcome—especially after the USDA announced that it would comply with the district court’s November 2016 decision.

When Yang told the Court that USDA would not release the data as a matter of good governance, Sotomayor responded, “Mr. Yang, you are going to tell me that you were going to be in contempt on the order?”

More questions came when the attorneys discussed whether the FOIA exemption required retailers to show releasing the data would have a “competitive harm”—or negative impact—on their business.

But unlike the attorneys from the two prior court proceedings, who argued on behalf of the USDA that revealing store sales information would lead to “substantial competitive harm,” the FMI asserted that that food retailers didn’t have to demonstrate competitive harm to prevail in this case.

The line of questioning from the justices hinted at the case’s larger implications: Should the Court decide that businesses can withhold data without showing competitive harm, it could set a precedent for companies across industries to withhold any and all data.

While the Court is expected to announce its decision at the end of June, food policy analysts reiterate that, in keeping with the spirit of the goals of the SNAP program, the information should become available.