After securing much-needed water rights, the co-op farm on the Tohono O’odham reservation is honoring thousands of years of the tribe's farming history. 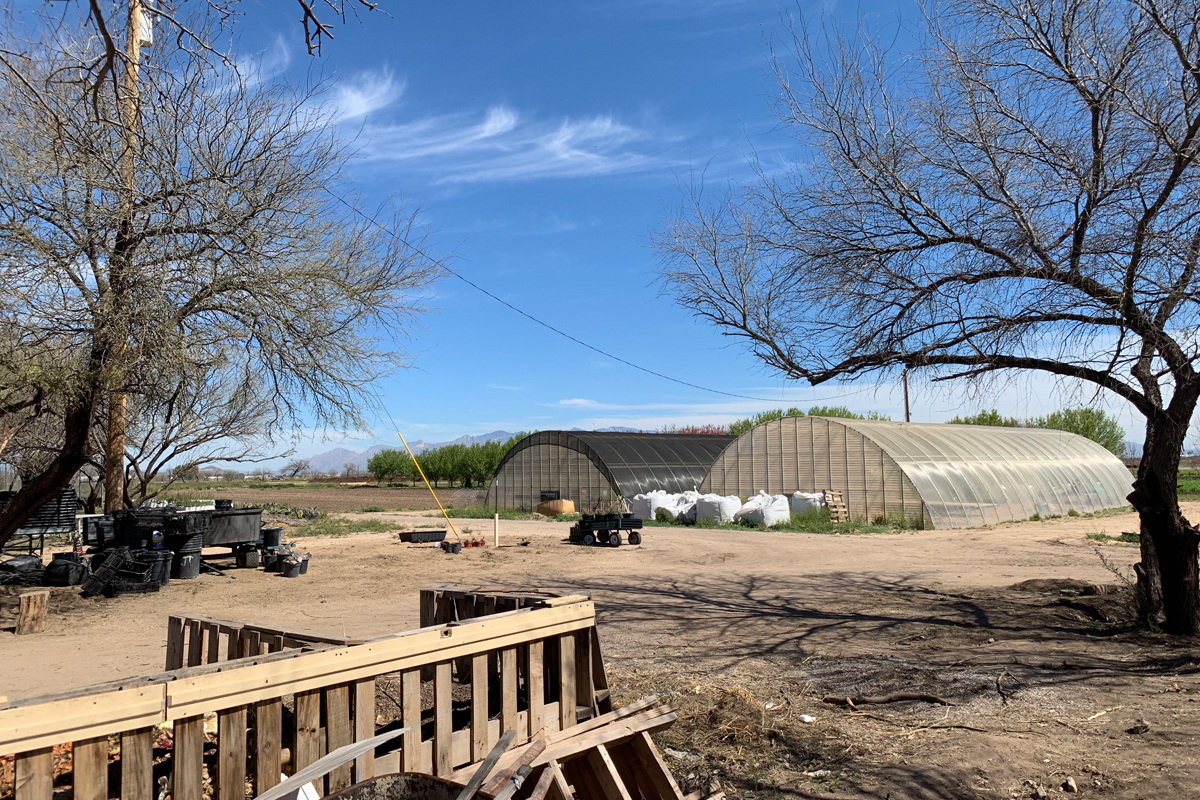 In a quiet part of Tucson, Arizona, only a few miles southwest of the city center, the San Xavier Cooperative Farm honors the agricultural legacy of the Tohono O’odham, a Native American tribe that has farmed the land for over 4,000 years. Located on the ancestral village of Wa:k, the 860-acre operation, one of the few farms on an Indian reservation at last count, is a lush green oasis in the otherwise dry desert.

Julie Ramon-Pierson, president of the San Xavier Co-op board, grew up hearing stories about her grandparents and great-grandparents cooking traditional O’odham foods such as tepary beans, squash, and corn, and she remembers seeing her mother harvest and clean the native beans. She hopes the co-op will help resurrect narratives like the ones she was raised with.

“The primary goal of the co-op is to create economic development in the community, re-educate people about traditional foods so they can prepare them at home to adopt a healthier lifestyle, and preserve O’odham values, like respect of land, plants, animals, and elders,” she says.

The Tohono O’odham Nation spans 4,460 square miles in Southern Arizona and includes 28,000 enrolled tribal members. The land is divided into 11 districts, and the San Xavier District is home to about 2,300 members. Founded in the early 1970s, the co-op leases farmland from the landowners, called allottees, and about 90 percent of its 25 to 28 employees are O’odham tribe members, according to Gabriel Vega, the co-op’s farm manager since 2018. 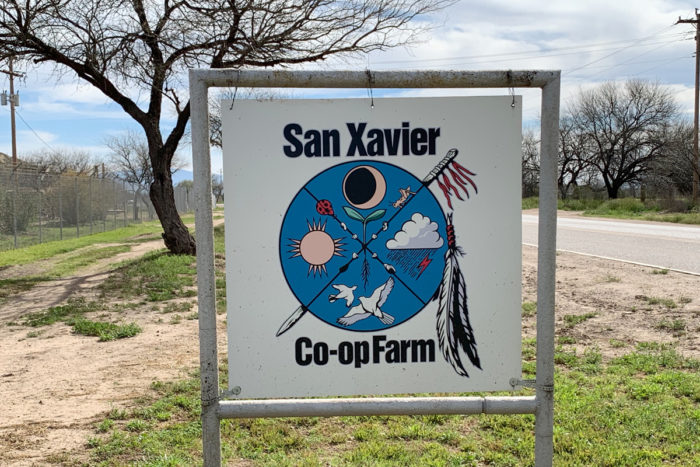 The welcome sign outside the entrance reflects this agricultural history; it’s a shield painted with a traditional planting stick and feathers representing a blessing. In the center is a sprouting seed, considered “new life,” and the four parts represent seasons containing the cycle of the sun, rain, moon, and wildlife. (Photo by Rudri Patel)

While the co-op grows alfalfa as its primary money-maker, other parts of the property are home to orange, plum, and apple orchards; an assortment of vegetable crops; and native foods such as tepary, pima lima, black, and white beans, wild mesquite trees, and pima wheat.

In addition to growing and selling crops, the co-op hosts blessing and spiritual ceremonies and provides educational opportunities for the tribal community. In early March, for example, it hosted a cooking and culture workshop for women tribe members.

Jacelle Ramon-Sauberan, a doctoral student at the University of Arizona, is focusing her dissertation research on water and land rights, as well as the impact of the San Xavier Co-op. She sees the co-op’s impact as three-fold: “It keeps traditional ecological knowledge alive, assists with food sovereignty, and allows the community to know its history,” she says.

There is a real effort, says Ramon-Sauberan, to keep doors open and educate people. If a member of the O’odham community wants to learn how to cultivate a certain food, she says, the co-op creates a teaching space to achieve this goal. More importantly, this attitude helps foster a “communal spirit among the members” that extends beyond the organization.

Bringing the Water Back

Though the O’odham has built an agricultural history in the Sonoran Desert over the course of thousands of years—one that recently helped earn Tucson the honor of becoming the first U.S. city designated a UNESCO Creative City of Gastronomy—the tribe’s farming legacy has been threatened in recent decades by a conflict over the desert city’s limited water supply.

Traditionally, the O’odham people structured their fields to channel water into planting areas, using the Santa Cruz River as the main source. When Tucson began to develop, however, its water demands drained the aquifers from the area, and by 1950, Vega says, “much of the agriculture ceased.” 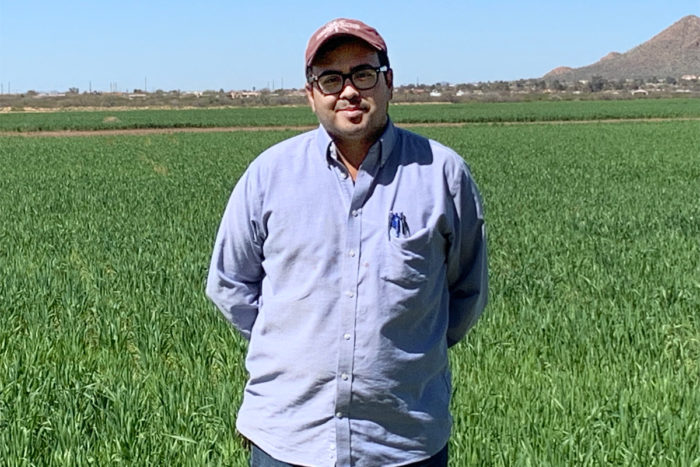 When the farm formed in 1971, it fought to reclaim tribal water rights and reintroduce farming practices that had been halted during the dry years. In 1975, the San Xavier District sued the City of Tucson over water rights. Ten years later, the Southern Arizona Water Rights Settlement Act granted an allotment of 56,000 acre-feet of water yearly from the Central Arizona Project—enough to sustain roughly 900 acres of land.

“Water to this community is a sacred element,” Vega says. “To have a running flow of water is fulfilling the prayers of the O’odham people.”

During the period when water supplies were nonexistent, the connection between the land and its people diminished, according to Vega. “Wells went dry [and] farming decreased,” which led to the loss of agriculture and tradition, and a rise in diet-related diseases like diabetes.

When water returned, it opened the door to reintroduce native foods, a healthier way of living, and a pathway to reconnect to the land. And that’s where San Xavier comes in.

Even with the busy undercurrent of activity, the farm is a tranquil space where a palpable sense of peace permeates the air. This isn’t accidental, according to Vega. “Many of the O’odham elders wanted this area to return to an agricultural community,” he says.

Although the water has returned to the area and re-enabled agriculture, healthy eating habits are slower to catch up. Vega says for many people the reality of day-to-day life on the reservation includes fast food.

To reverse this trend, San Xavier Co-op is preserving the “genetic resources” stored in seeds. Though the O’odham have 19 different varieties of corn, San Xavier has access to only two. Recently, the United States Department of Agriculture (USDA) awarded the farm a grant to build a 2,400-square-foot cold storage facility to preserve its seeds.

“The plan is to go door-to-door in the community and see if families have corn seeds that were lost in the last few decades,” Vega says. 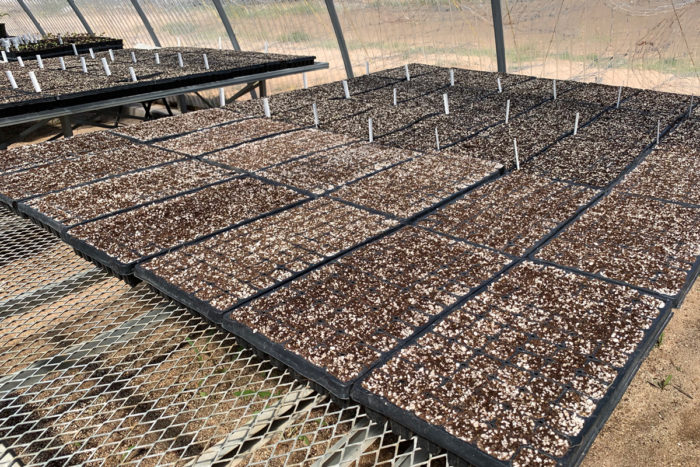 Organizations like Native Seeds/SEARCH (NS/S) help preserve indigenous seeds and serve as a repository to protect cultural heritage. Although there isn’t an official partnership in place, Laura Neff, an associate at NS/S, says that San Xavier Co-op recently received two community seed grants from the organization. Additionally, San Xavier sells its products in the Native Seed/SEARCH retail store. With efforts like these, the O’odham people may be able to return to the foods their ancestors enjoyed.

Another focus at San Xavier is cultivating wild foods. In the past, the O’odham relied on the pods of mesquite trees to supply them with protein. Once the pods dry, the O’odham harvest, mill, and eventually turn them into flour. “Traditionally it was eaten with water, and these high nutrients provided energy,” Vega says.

San Xavier Co-op remains viable—and able to aggressively pursue growing native foods—“because it invests in alfalfa crops, its best-seller on the farm,” Ramon-Pierson says. But the focus on income doesn’t mean sacrificing what is good for the land, Vega emphasizes. The co-op is Certified Naturally Grown, he says, which means it grows everything without synthetic fertilizers, pesticides, herbicides, fungicides, or GMOs.

“This farming community has been here for several thousand years, and there is an intentional purpose to how the O’odham use the land,” says nursery coordinator Cie’na Schalaefli. Keeping it chemical-free helps the tribe maintain its traditional values. 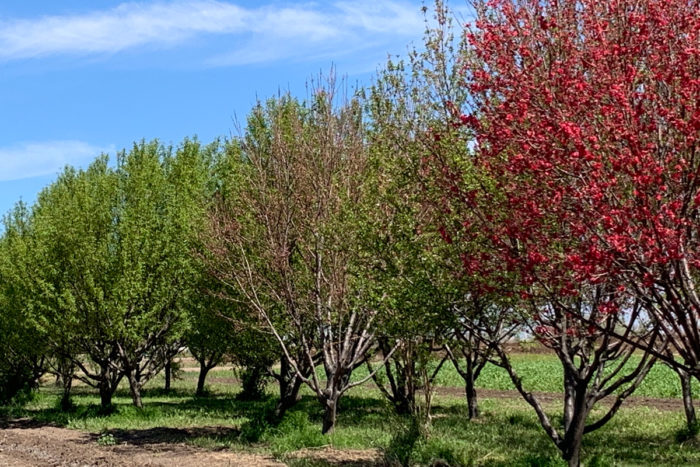 Orchards line the property near the side of the farm. (Photo by Rudri Patel)

The co-op has also formed a partnership with the Compost Cats program through the University of Arizona, a student-run organization that collects food waste and scraps from local businesses, processes the material at the San Xavier Co-op, and sells it as compost to the community.

The co-op constantly looks for ways to diversify its offerings in order to stay afloat, Vega says. San Xavier has a blossoming partnership with both the food bank community and Tucson schools, says Ramon-Pierson, where it sells broccoli and melons. It also runs a catering business that blends seasonal indigenous O’odham foods with non-traditional items like tortillas and tamales.

Several other projects are in the works or already underway, Vega says. “Bridgestone, the tire company, recently contacted the co-op about the Gualye, a woody shrub which thrives in the desert Southwest,” he says. The interest is to produce rubber for tires. There’s also the possibility that hemp production could begin on the property, he adds.

Even though the farm looks for numerous ways to be profitable, the O’odham Nation is the first priority. Workshops like the Wild Harvest teach community members how to harvest, process, and prepare traditional foods such as cholla buds from a cacti, also known as ciolim, mesquite, and prickly pear. 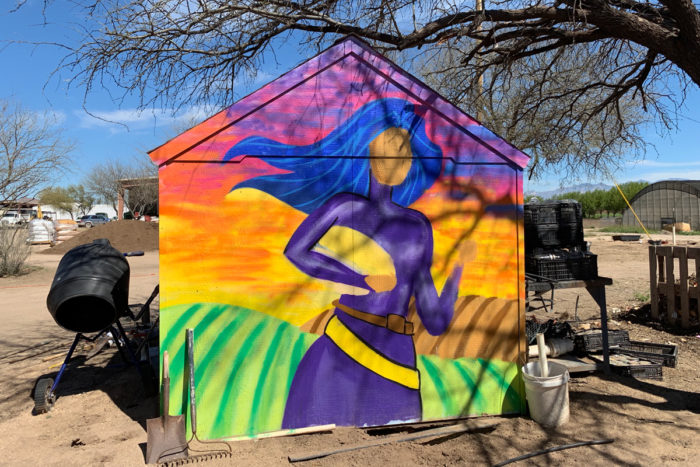 A colorful mural serves as a reminder of San Xavier’s ancestral roots. (Photo by Rudri Patel)

“Once they learn how to harvest, they can do this on their land at home, bring it back to the farm, and we pay them by the pound,” Vega says. This fosters economic resiliency and a way to reintroduce traditional foods to children and families.

The workshops also cover the basics of how to cook foods like tepary beans—which can easily boiled in water with chiles—and sends participants home armed with how to search for online recipes used in making traditional O’odham meals. A resurgence of traditional foods, according to Ramon-Sauberan at the University of Arizona, is working to reduce the rates of diabetes and other health issues among the O’odham people.

San Xavier Co-op’s multi-pronged approach to caring for its community, is merely a “continuation of what’s in their ancestral genes,” Vega says. “Not many spaces that allow you to pay your bills, take care of your elders, and adopt a healthy way of living.”

[Editor’s note: This article was updated to correct Gabriel Vega’s time working on the farm and the fact that the tribe is looking at producing hemp as a new crop.]