A group of soil-based farmers are raising questions about possible loopholes in the certification of soil-free organic operations. 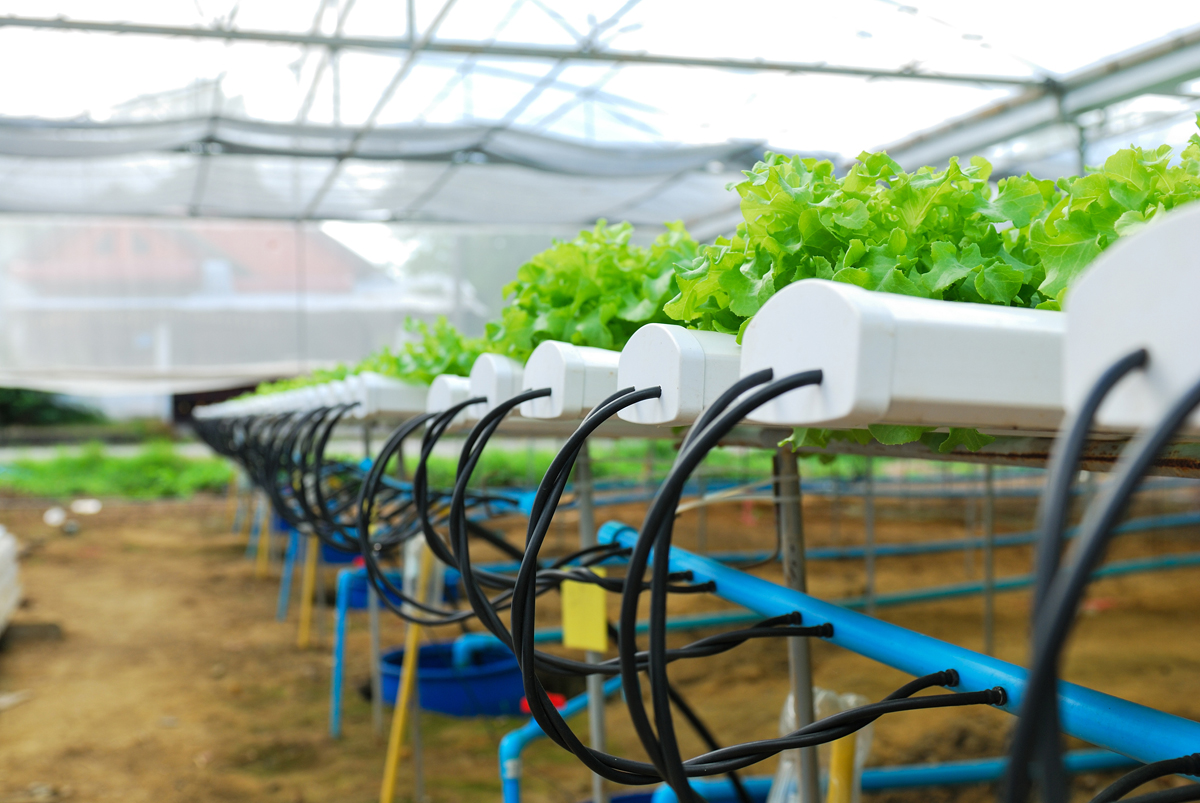 (Update: On March 3, 2020, the Center for Food Safety and a coalition of farmer plaintiffs filed a lawsuit challenging the USDA’s decision to allow hydroponic operations to earn USDA Organic certification.)

(Update: On June 3, 2019, the USDA clarified its standards regarding organic crop container systems, requiring that container-based operations must also stop using synthetic chemicals not approved for organic crop production for three years prior to achieving certification, both in the containers as well as on the soil underneath.)

The latest salvo in the battle between traditional organic farmers—who grow in nutrient-rich soil—and soil-free hydroponic operators centers on a prohibited weed-fighting chemical.

Soil farmers say the National Organic Program (NOP) allows the use of herbicides such as glyphosate, the active ingredient in Bayer’s Roundup, in hydroponic operations just before they are certified organic. The federal agency denies that’s the case, and says the issue of hydroponic certification has been settled for good.

The reports come amid an increased interest in organic hydroponics, as low commodity prices and cheap produce imports from Mexico and elsewhere are pushing hydroponic growers to seek out organic certification. Hydroponic systems rely on supplying nutrients to the plants through a liquid feed. While some grow produce suspended in water, many use substrate such as coconut husk; all use container or greenhouse production systems.

Organic hydroponics has long been a controversial growing system. The U.S. Department of Agriculture (USDA) has said hydroponic, aquaponic, and aeroponic operations have been eligible for organic certification since the NOP began in 1990. But the National Organic Standards Board (NOSB)—a group of farmers, environmentalists, and industry representatives who advise the USDA on organic standards—has reversed course on the issue several times under pressure from traditional soil-based farmers. In November 2017, the NOSB failed to pass a recommendation to prohibit hydroponic farms from being certified organic.

Though the lack of a ban opened the gates to more operations seeking certification, it didn’t stop the opposition, who believe that healthy soil, managed in a holistic fashion, should be the basis of organic farming. Earlier this month, the Real Organic Project, a coalition of farmers and advocates committed to soil-based farming and other strict organic principles, reported that some large hydroponic operations, especially in the berry industry, are being built on land that was recently sprayed with herbicide, including glyphosate. Dave Chapman, a Vermont organic tomato farmer and the group’s executive director, said he received reports from farmers in California and Florida regarding the spraying.

“One farmer watched it happening in a neighboring farm, another heard the hydroponic grower talk about it during a university extension workshop,” Chapman said. “Everyone knows about it, and we’re very concerned.”

Essentially, Chapman said, a hydroponic grower levels their parcel of land, sprays it with herbicide to keep the weeds down, spreads plastic over the field, then places pots or builds a greenhouse over the plastic. Soon after, the operation is allegedly certified as organic. And while the herbicide does not touch the plants or the substrate in which they’re grown, the use of a prohibited chemical on the land just weeks prior to certification is against the very grain of what organic means, Chapman said.

Chapman declined to name the hydroponic farms doing the spraying or the certifiers who work with them. And the farmers who reported it asked to remain anonymous. Although the Real Organic Project’s evidence is sparse, it turns out federal organic rules don’t explicitly prohibit hydroponic growers from spraying prior to certification. In fact, there are no standards for hydroponics in the rules.

Soil-based farmers must go through a three-year transition period from conventional agriculture to a certified organic harvest. It’s a major challenge, as during this period they’re required to relinquish all prohibited chemicals, improve soil quality and face diminishing yields—all without getting paid a premium for organic crops.

In other words, a conventional hydroponic grower can switch to organics practically overnight. Glyphosate and other chemicals can potentially be used shortly before organic production begins, just prior to the application for certification is filed. It’s a message that hydroponic growers or those interested in container growing are also hearing from organic certifiers, Chapman said.

But Tucker told Civil Eats there’s no indication this is happening on hydroponic farms. She said glyphosate and prohibited herbicides are not allowed in organic agriculture. Her agency checked in with one of the operations reported by the Real Organic Project, as well as its certifier, she added, and did not find any violations. “I’m confident glyphosate was not applied to the soil below this system,” Tucker said.

The main organization representing hydroponic farms, ranging from a few to a thousand acres, echoed that statement. “I am not aware of that ever occurring. The Real Organic Project has failed to produce the name of any operation that has ever done that,” said Lee Frankel, executive director of the Coalition for Sustainable Organics.

California Certified Organic Farmers (CCOF), the nation’s largest organic certifier, says it follows those rigorous rules. “As soon as we receive your application … CCOF requires the entire parcel to be managed organically,” including the soil under the containers, said Kelly Damewood, the organization’s CEO. “If we received a report that a producer is applying glyphosate, we would immediately take action.”

CCOF currently certifies 3,720 farms throughout the U.S. About 150 of those are hydroponic or container-based farms, with most using some type of substrate to grow produce in containers, Damewood said. CCOF has been certifying hydroponic operations for over a decade but has seen an increase in numbers in recent years, she said. This increase may be due to water and labor savings, or the ability to place containers or greenhouses on land otherwise unsuitable for farming.

Damewood said CCOF would not allow a producer to level and compact soil, she said. “In our experience, spraying prohibited materials and leveling fields immediately before applying for certification is not a common practice.”

Chapman disputes those statements and says the very trust of consumers is at risk, not to mention the livelihood of soil-based organic growers.

Hydroponic organic growers have a significant economic advantage, Chapman said, because they don’t need the three-year transition period, can immediately get premium prices for organic produce, and can potentially use prohibited substances just prior to certification to battle weeds, a major challenge for soil-based farmers.

“It’s a gold rush for all these conventional growers,” Chapman said. Hydroponic berry, tomato, and other crop operations “are transitioning overnight. They’re struggling in a flooded market, so the fact that they can switch immediately to organics is a lifeline to them.”

While only about 1 percent of American farmland is certified organic, the sector has seen phenomenal growth over the past two decades. Since the USDA began certifying organic farms in 2002, the sector has grown to roughly 27,000 such operations in the United States; 18,400 of those grow crops. The NOP says it doesn’t know how many of them are hydroponic or container farms, because it does not track production methods for certified operations.

According to the Organic Trade Association, organic food sales topped $45 billion in 2017. Though they account for just 5.5 percent of U.S. retail food sales, organic food sales are growing six times faster than the general food market. Organic fruits and vegetables continued to be the largest category, recording $16.5 billion in sales in 2017, with a 5.3 percent growth.

Whether consumers are choosing organic to reduce their own exposure to pesticides or to support practices that don’t degrade the environment is key to the discussion of hydroponics, as Chapman sees it.

He and his colleagues worry that organic hydroponics are eroding the confidence of consumers who picture crops grown in healthy soil, not in containers on land that has been sprayed by chemicals. For this reason, the European Union has kept crops grown hydroponically from being marketed as organic.

There’s also the fact that glyphosate itself may negatively impact the soil. Some research has shown that the herbicide may alter the mix of bacteria and fungi (or biological organisms) in the soil itself.

“[Hydroponic] will destroy the meaning of organic in the marketplace,” says Chapman. “If you buy an organic tomato right now (in a supermarket), it’s almost certainly a hydroponic tomato. But consumers can’t tell. They’re desperate to buy food they can trust, and big agriculture has come in and redefined how we grow organics.”

Fixing the regulations to add a transition period for hydroponic farms that seek organic certification won’t fix the problem, Chapman added, because such operations shouldn’t be allowed to attain certification in the first place. “The foundational slogan of organics was ‘feed the soil, not the plant,’” he said.

But Tucker, the NOP administrator, disagrees. “Three administrations have considered this question and all ended up in the same place: Non-soil systems are allowed (to be certified as organic),” she said. “We consider this a settled issue.”

Tucker said she supports additional third-party labeling to distinguish the produce: either a soil-based growing label, or a hydroponics label. CCOF is also in favor of a label such as “hydroponically grown” or “container grown.” But it would be up to the farmers to organize such a labeling system. The Real Organic Project already has proposed an add-on label, which would be available only to farms that are already certified organic by the USDA, but requires adherence to standards above and beyond the organic label.

And advocates of the hydroponics/container growing industry say they’re tired of their approach being portrayed in a negative light. “I found the demonization of what can actually be a quite sustainable and innovative approach to agriculture quite frustrating,” said Marianne Cufone, the executive director of the Recirculating Farms Coalition, which represents smaller scale, eco-efficient hydroponic, land-based aquaculture and aquaponic growers.

She said many hydroponic operators grow at or above organic standards. “They get into using these systems because they have the potential to be much more eco-efficient—recycling water, waste and even using alternate energy—to produce more food in less space, even (in) spaces that are otherwise unusable,” Cufone said. “If we really want to think about the core values of organic—not harming our planet and feeding people good food—in many ways hydroponics and aquaponics can be seen as leaders.”