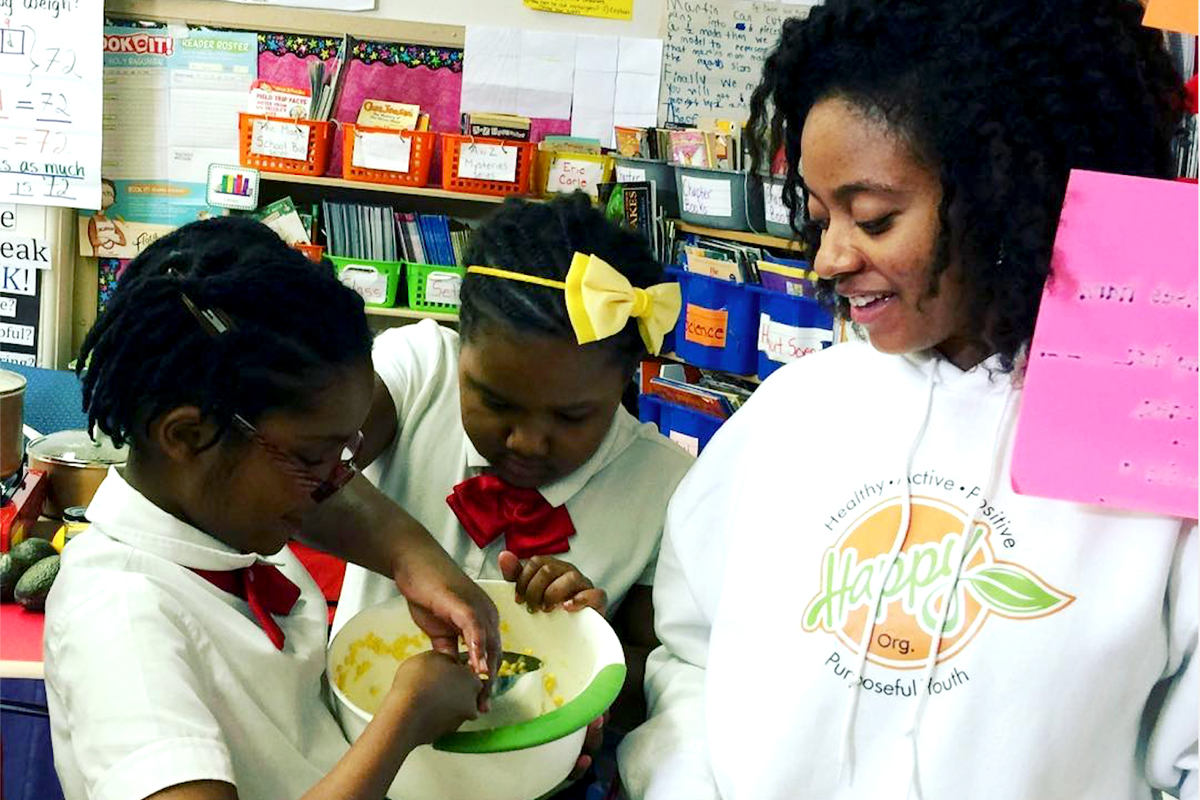 Haile Thomas is not your typical Gen Z teenager. The 18-year-old activist, health coach, vegan chef, and public speaker became the CEO of her nonprofit organization, Healthy Active Positive Purposeful Youth (HAPPY), when she was just 12 years old, inspired by witnessing her father fight off Type 2 diabetes with healthy eating and exercise. Since then, HAPPY has reached more than 15,000 children through programs in elementary and middle schools from New York City to Dubai.

With encouragement from her mother, Charmaine, Thomas started cooking from a very early age. “I learned to cook really early based on my upbringing,” says Charmaine of her Jamaican childhood. “So it was a natural thing for Haile to be in the kitchen. By the time she was eight, she was able to cook full-blown meals on her own. Once I had the confidence that she wasn’t going to cut her fingers off, she was free to do whatever she wanted to, and it instilled in her a lot of confidence in her ability.”

When Thomas’s father was diagnosed with Type 2 diabetes when she was 10, her family made some big lifestyle changes, shunning processed foods and banning unhealthy ingredients from their kitchen. These adjustments lead to the reversal of her father’s disease, and the transformation inspired Thomas to spread the gospel of a healthy lifestyle. 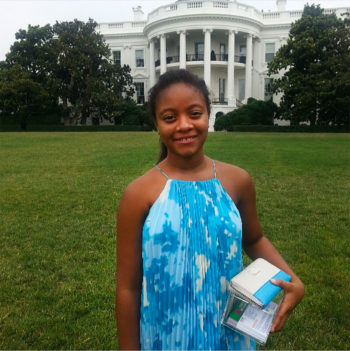 Haile Thomas in front of the White House in 2013.

HAPPY first started in the Thomas’ hometown of Tucson, Arizona, in 2012. In its first iteration, Thomas and her mom hosted programs at the local YWCA, honing their curriculum with children in a daycare program while their parents took GED courses at the community center. “We saw a huge opportunity to work with these kids who were just sort of there, not doing anything, and have them do cooking classes with us,” says Thomas. “That was our foundation and where we gained a lot of our early experience.”

After a few years, the duo expanded their offerings to include a summer camp, also hosted at the local YWCA. Helped by volunteers and supplemented by community wellness leaders, the early version of HAPPY looked a lot like a basic nutrition class. Over the years, Thomas shifted programming to focus on promoting plant-based eating. “Kids have a horrible perception of vegetables, so we really wanted to change that specifically and show them the benefits and how they can taste good,” explains Thomas.

Inspired by organizations including Edible Schoolyard and Harlem Grown, HAPPY uses its own distinct voice and style of teaching to connect with students. “We’re coming from a unique perspective of a peer-to-peer learning experience,” says Thomas. “We want to make sure that we maintain that authentic feel and more of a Gen Z-centric perspective. We never do lecture-style classes—it always has to be super interactive and high-energy so that kids won’t feel like they’re bored or confused.”

Funded by Morton Salt and a grant from the Clif Bar Family Foundation (which has also funded Civil Eats in the past), HAPPY aims to prevent diet-related illnesses including cardiovascular disease and Type 2 diabetes in children and teens, as well as avoid the social costs which are associated, including  low self-esteem and social discrimination. By working in underserved and at-risk communities across the globe, HAPPY aims to empower its audiences to make healthy lifestyle choices and minimize the occurrence of preventable health issues.

In 2017, Thomas and her family moved from Tucson to Chester, New York, a small town 60 miles north of New York City. “We got an opportunity to expand our programs in the New York area by partnering with the nonprofit Harlem Grown,” says Thomas. “Even though Tucson is beautiful and has amazing people there, it’s very laid-back and slow-paced. So for us to fully maximize our efforts, we thought moving to New York would be our best choice.” 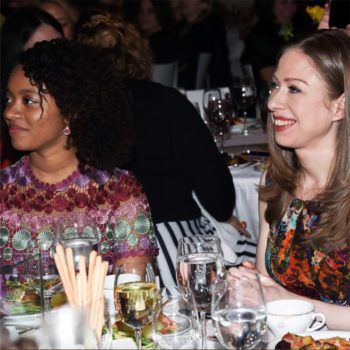 Haile Thomas at a dinner with Chelsea Clinton in 2017.

With all these activities and a reach of 15,000 students and counting, some may be surprised to learn that the organization still only consists of Thomas, her mother, and a handful of volunteers. Despite the small team, her work and her mission have already earned a lot of attention from big media outlets, including The Today Show, Food Network, and Fortune. In 2017, CNN named her a Young Wonder, and Michelle Obama, for whom Thomas cooked at the White House, said, “Haile is an example for all of you, what your little powerful voices can do to change the world.”

A typical HAPPY program involves anywhere from a half-day to three days of activities at an elementary or middle school. Thomas starts with a general assembly, where she shares her personal story and asks the kids about their cooking habits at home and if any of their family members have food-related illnesses. The students then break out into smaller groups, and Thomas takes them through nutrition games and cooking demos to bring the topics to life.

One of the most popular games is “Sugar Shockers,” where Thomas lays out different cereals on a table along with bags of sugar and asks the kids to guess how many teaspoons they believe are in certain products. “That experience is really fun because they’re immediately aware of just how much sugar they’re eating and how small the recommended portions are when compared to the size of a normal bowl,” explains Thomas.

As the name of the game suggests, the students are often quite shocked. After they see that having one serving of Fruit Loops is equal to consuming over 3 teaspoons of refined sugar, or that healthier-sounding Raisin Bran clocks in with even more at 4.5 teaspoons, Thomas shows them how to make healthy breakfasts with natural sweeteners. The organization hands out surveys before and after the program to measure impact and has found that 87 percent of youth participants have adopted healthier eating habits after going through HAPPY’s programming. This includes eating more produce, reducing intake of sugary beverages, reading product labels, or cooking more at home. 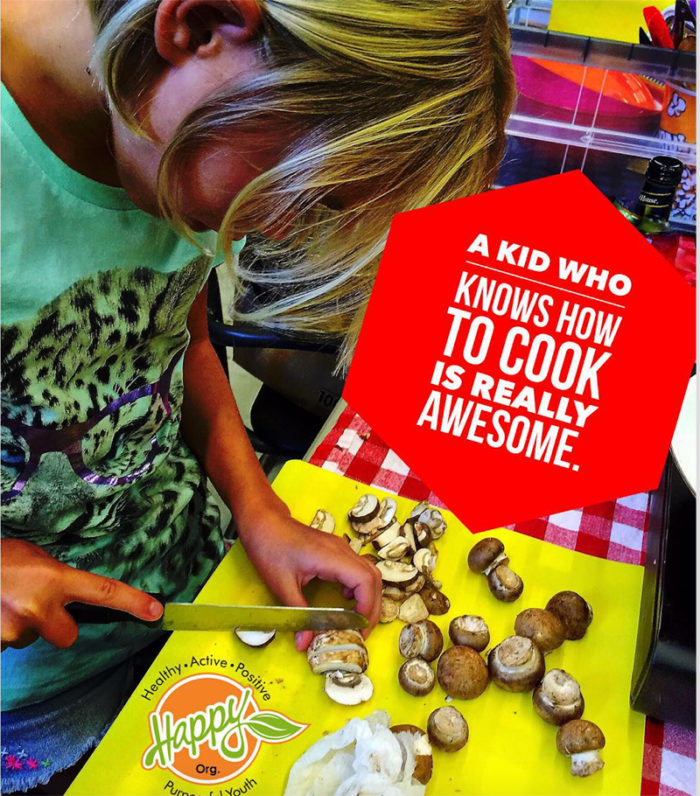 As important as it is to show the negative impacts of unhealthy foods, Thomas also wants to arm the students with the skills to replace those foods with healthier alternatives. After the “Sugar Shockers” game, she takes the class through the process of making their own granola with natural ingredients and fewer sweeteners. Her favorite dish to make with her students? Sweet potato tortilla pizzas.

“We call them tortizzas,” says Thomas. “They’re so fun to make, really simple, and I’m always so happy see the kids pleasantly surprised by how all these ingredients come together. It really just helps the kids look at vegetables as something that can make something really cool and delicious.”

Ellen Moss was drawn to Thomas after seeing her appearance on the Today Show. As the president and CEO of the Godman Guild Association, a non-profit that provides youth education in the underserved Northside neighborhood of Columbus, Ohio, Moss wanted to ask Thomas to meet with the young people that take part in Godman Guild’s programming. “I was so impressed by Haile and the fact that she was so young to establish a nonprofit organization,” explains Moss. “Haile was really a shining example of what can happen if a young person is committed to a cause regardless of their age.”

Traveling to Columbus in October 2017, Thomas brought HAPPY’s plant-powered programming to local public officials, schools, and the greater community. “After visiting the elementary school, the kids just crowded around her like she was the Pied Piper,” says Moss. “She was such a celebrity to them—they all wanted a picture.”

Not only was Moss impressed with Thomas’ impact on the children in her community, but she also felt the effects of Thomas’ message personally. “I have become a believer. After learning about her family and how they modified their eating habits, I just said you know, there’s probably more to paying attention to what I put into my body,” says Moss. “I was not really in that camp before with my own personal health, but now I’m dealing with high blood pressure, so I’ve changed what I eat and been more active to control it instead of getting on medicine.” 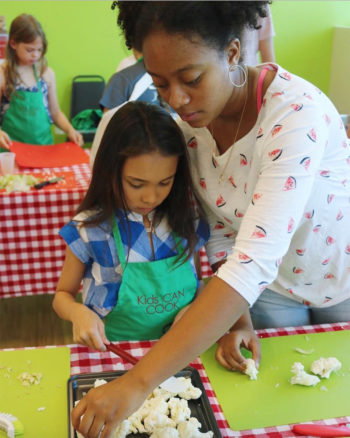 In order to expand their reach, Thomas and her mother are currently working on a new initiative called The HAPPY Academy, which will put all of Thomas’ lessons into a virtual platform so that any teacher and community leader with an internet connection can have access to them.

“We definitely see 2019 as the year of really expanding, growing, and fully establishing ourselves,” says Thomas. “It’s just been a journey of figuring things out as we go, and we really feel like next year is a good time to start expanding and building the HAPPY family.”

In the spring of 2018, Thomas graduated a year early from home-schooled high school in order to focus more on developing HAPPY and her brand. She recently finished an eight-month process of writing and preparing a proposal for a book of plant-based recipes and wellness tips. And she doesn’t appear to be slowing down any time soon.

“HAPPY’s main goal is to engage, educate, empower, and inspire healthier generations,” says Thomas. When asked about her long-term goals for HAPPY, Thomas exclaims, “In 10 years, having like a million students complete our programs would be amazing!”