Can New York’s immigrant farmworkers get legal driver’s licenses—without handing their information over to ICE? 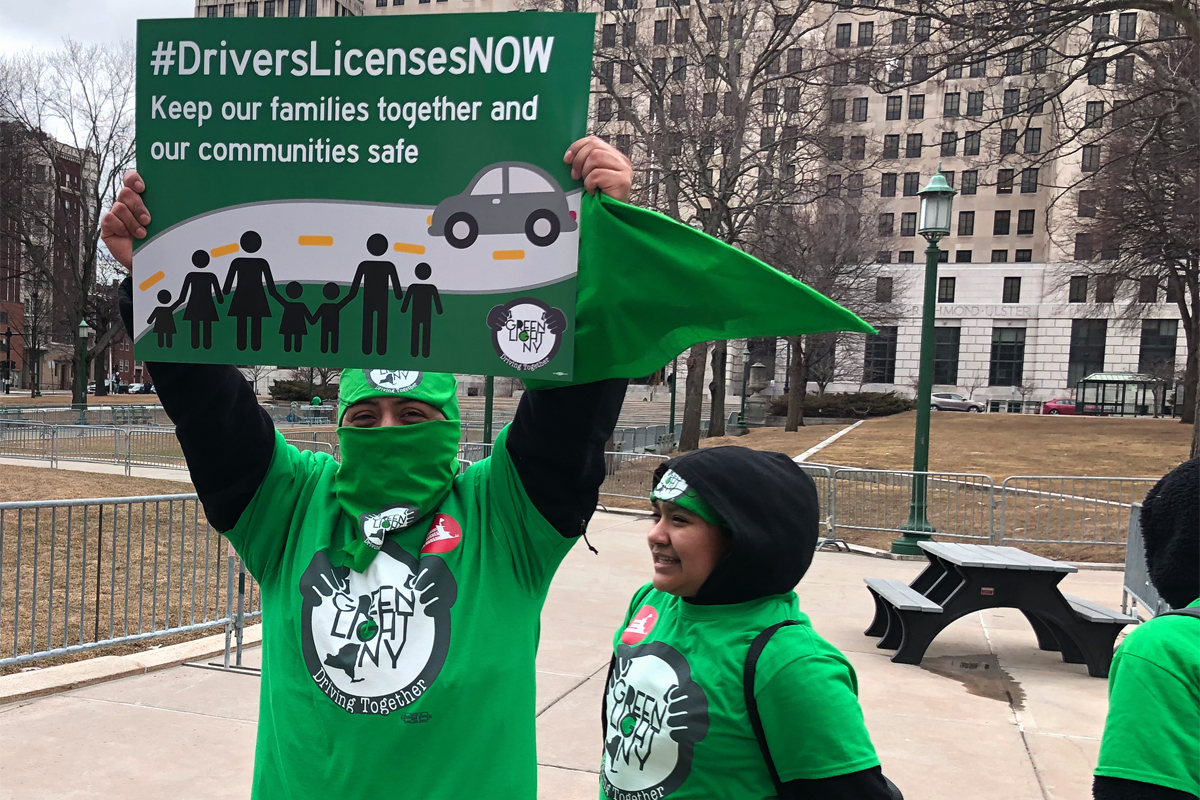 On March 12, Victor Cortez, an undocumented immigrant and organizer with farmworker justice organization Alianza Agricola, recalled a day when he was injured while working on a dairy farm in upstate New York. “When I wanted to go to the doctor, I couldn’t go, because I didn’t have a driver’s license. I had to deal with the pain that night and another night, too,” said Cortez, standing before a crowd in a packed theatre in Albany, New York.

The audience cheered loudly as they participated in Cortez’s call-and-response chant. “¿Que queremos? Licencias! ¿Cuando? Ahora!” (“What do we want? Licenses! When do we want them? Now!”)

Cortez was one of close to a thousand immigrants—many of them farmworkers and their families—who had traveled from all corners of the state to rally and meet with legislators in support of passing a bill—the Driver’s License Access and Privacy Act—which would allow New York residents to register for drivers’ licenses regardless of immigration status. The New York Immigration Coalition recently announced it was putting $1 million into the campaign, and several groups from across the state—including Make the Road New York in Long Island and the Worker Justice Center of New York in Rochester—have formed a coalition called Green Light NY. 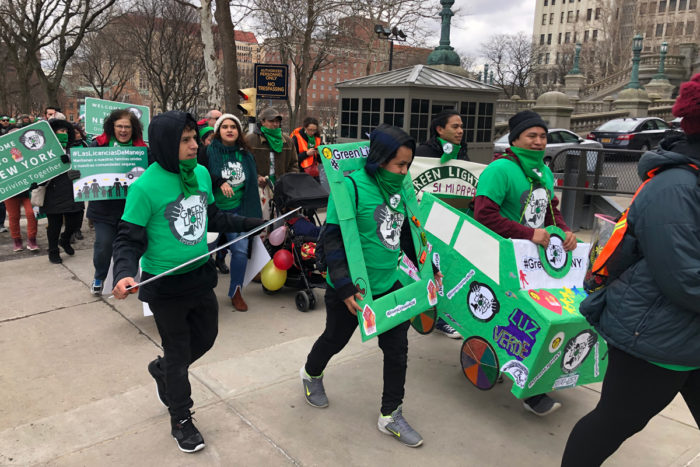 “It is my job as a sponsor…to make sure that this bill becomes law this year, and I pledge to you that I will fight…for you,” said state Senator Luis Sepúlveda, addressing the crowd at the rally earlier this month.

The campaign in New York is part of a larger movement that has been picking up speed across the country, and it’s being seen as a crucial way to provide farmworkers and other undocumented people with more agency, mobility, and rights. Twelve other states and Washington, D.C. now allow residents to obtain licenses regardless of immigration status, and nearly all those policy changes went into effect within the last five years. Similar campaigns to pass legislation are currently underway in Wisconsin (backed by the Wisconsin Farmers Union) and Michigan, and legislation was also introduced in New Jersey at the end of 2018.

This movement has grown against the backdrop of increased immigration-related arrests and deportations under President Trump, however, and a New York Times investigation published last week found that immigration crackdowns are increasingly affecting New York’s farmworkers and farmers.

Some states’ motor vehicles departments have worked with Immigration and Customs Enforcement (ICE) to target immigrants for detention and deportation. For example, in Vermont, where the state changed the driver’s license law in 2014, Vermont Department of Motor Vehicles workers had been in regular communication with ICE for the explicit purpose of sharing the names and contact information of people they deemed “illegal.”

As a result, New York lawmakers are working to build privacy protections—such as safeguarding personal information collected from immigrants—into the proposed bill in their state. Groups in other states are working to add such protections into their laws retroactively.

Why Access to Driver’s Licenses is a Farmworker Issue

Immigrants, many of them undocumented, play a major role in America’s food system. They make up a large part of the workforce in industries like meatpacking, food service, and, most significantly, agriculture. While exact numbers are hard to find due to the nature of their undocumented status, the USDA estimates that about half of the country’s hired farmworkers are undocumented immigrants. (Many groups that work directly with immigrant farmworkers believe that number is much higher in reality.) Dairy farms in the Northeast are particularly dependent on immigrant labor. 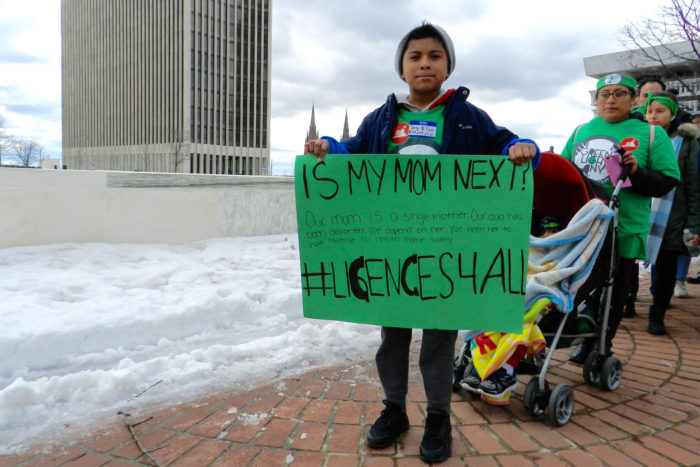 “Upstate, the majority of undocumented immigrants are working on farms,“ said Carly Fox, of Worker Justice Center of New York, noting also that many of those workers also live on the farms. “In that sense, getting to work is relatively easy, but in terms of getting off the farm to do anything else, it’s really important to have freedom of movement for workers, because otherwise they end up relying on their employer for other needs.”

In an emergency, Fox added, workers are often reluctant to call 911 due to language barriers and fears that local law enforcement collaborates with the U.S. Customs and Border Protection (CBP) (the agency is active in New York because of the proximity to the Canadian border) or ICE. An underground network of drivers called raiteros help workers get around, but Fox and Cortez both cited their exorbitant prices (which can range from $50 to $100 for a short trip to the store) as further obstacles to unlicensed workers’ mobility.

What’s more, said Fabiola Ortiz, of the New York Immigration Coalition, “the areas where the farms are located often are towns that are not friendly to immigrants.”

Enrique Balcazar is originally from Mexico and now lives in Burlington, Vermont, where he is a leader at Migrant Justice. He said he worked on four different dairy farms over the years, where he was often expected to work long hours at below minimum wage, sometimes for seven days in a row. “On top of all of the challenges of the job, you couldn’t leave the farm to go to the bank, to go to the store and buy food, or if you have children, to bring your kids to school,” said Balcazar. 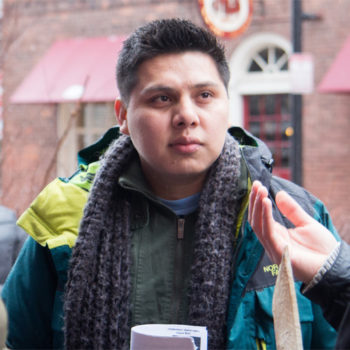 Many individuals do choose to drive illegally, which puts them at risk for routine traffic stops that get them reported to immigration authorities. In August, for example, a dairy worker originally from Guatemala was pulled over in Attica, New York, while driving to celebrate his daughter’s third birthday. When the local police discovered he didn’t have a license, they handed him over to the CBP. “It’s everybody’s worst fear,” Fox said. “The stakes are so high.”

Of course, many opponents of driver’s licenses for immigrants see events like those as positive, arguing that those who are not authorized to live and work in the U.S. should be detained and deported. For example, in New Jersey, about 20,000 people have signed an online petition against driver’s licenses for undocumented immigrants. “When New Jersey enforces its regulations, codes, and laws against businesses and homeowners, but yet on the other side of the coin will completely ignore that somebody broke the law to come into the country and give them these benefits, I think it’s an outrage,” state Senator Chris Connors told NJ 101.5.

However, advocates say licenses for immigrants would benefit American citizens by making roads safer, since immigrants who are already living and working in the country would be required to take and pass drivers’ tests. It would also boost the economy, some argue. A 2017 report compiled by the Fiscal Policy Institute found that if the proposed bill passes in New York, an estimated 265,000 unauthorized immigrants would get licenses, resulting in $57 million in combined annual government revenues from sources including license plate fees and car registrations.

While those numbers sound high, evidence from other states suggests they’re not out of the question. In Maryland in 2014, more than 13,000 immigrants applied for driver’s licenses within the first two days of the new law taking effect. Vermont’s law creating “Driver Privilege Cards” (DPC) for residents without Social Security numbers also went into effect in 2014. A little over a year later, a reported 40,000 people had obtained a DPC.

After working with Migrant Justice to organize for the Vermont law, Balcazar got his DPC about six months after the policy was in place—and said it immediately changed his day-to-day life. “I was able to get a car, register it in my own name, and put in all of my paperwork,” he said. “I was now able to go to the store and buy food when I needed to, and I was able to visit my family members.”

But on March 17, 2017, that all changed. Balcazar was arrested by four undercover ICE agents as he left Migrant Justice’s office and was detained. He was released after 11 days, but is still in the midst of deportation proceedings. At least 20 members of the Migrant Justice community have been arrested, and the pattern prompted the organization to look into why.

After obtaining lawyers and requesting documents, they discovered that the Vermont DMV had been sharing information from DPC applications with ICE. In November, members of Migrant Justice, including Balcazar, filed a lawsuit against ICE and the DMV alleging that, “DMV has had a long-standing policy, pattern, and practice of permitting its staff to routinely and regularly share information with ICE and Border Patrol and to actively seek to facilitate the immigration enforcement activities of those two agencies.” The behavior they documented included responding to requests for information from ICE, but also opening investigations and contacting ICE solely on the grounds that an application had a Latino last name.

In 2016, a Jordanian immigrant sued the DMV after he was turned over to ICE as a result of applying for a DPC. During an investigation, the Vermont Human Rights commission found he had been discriminated against and a settlement the DMV agreed to involved changing several policies, like not requiring applicants to answer a question about citizenship. (The Vermont DMV did not respond to a request to comment for this article.)

Meanwhile, in Washington, the Seattle Times discovered that after the state began allowing undocumented immigrants to obtain licenses, the Department of Licensing shared personal information with immigration authorities 20 to 30 times per month, resulting in the detention of several individuals who were targeted because they used foreign documents for identification.

The governor issued an executive order halting the practice and the state then implemented additional privacy practices. Immigrants’ rights groups also filed a lawsuit in October 2018 against ICE, on the grounds that the agency “systematically surveils, detains, and deports immigrant activists who speak out about immigration policies and practices.” (ICE also did not respond to a request for comment for this article.)

In other words, it’s no accident that the word “privacy” is central in the title of the New York law. “We want to make sure that as we’re talking about expanding access to driver’s licenses, we’re also taking a look at how the DMV safeguards the information it records and collects from people,” said Zachary Ahmad, a lawyer with the New York Civil Liberties Union, which provided input on the provisions in the New York bill. To that end, the bill includes specific stipulations related to how long information can be retained (for instance, applications for standard driver’s licenses that have already been reviewed may be destroyed after they’ve been on file for six months) and how and when third parties can access the DMV’s database of information.

“There’s never any surefire way to legislate complete protection or to ensure that a person’s information would never be improperly exposed, but this is about providing a baseline level of protection,” said Ahmad. He noted that, for now, there are risks to both driving without a license and to registering for one, but added, “it’s important that people have that opportunity to make an informed choice that’s right for their circumstances.”

At the recent Green Light NY day of action in Albany, hundreds of undocumented workers made a similar calculation and decided to step out of the rural shadows wearing bright green T-shirts and bandanas to chant “¡Sí, se puede!”

And despite the unknown future of his deportation proceedings, Balcazar said he still believed wholeheartedly in the fight for driver’s licenses. “I’m inspired that workers in New York have taken up a campaign … and I would say that one thing we’ve learned from our experience in Vermont is that when pushing for these changes, we need to make sure that there are protections.” At its core, he adds, “the right to drive is a human right.”

Photos © Lisa Held, except where noted.