How Farm Policy and Big Ag Impact Farmers in the U.S. and Abroad | Civil Eats

How Farm Policy and Big Ag Impact Farmers in the U.S. and Abroad 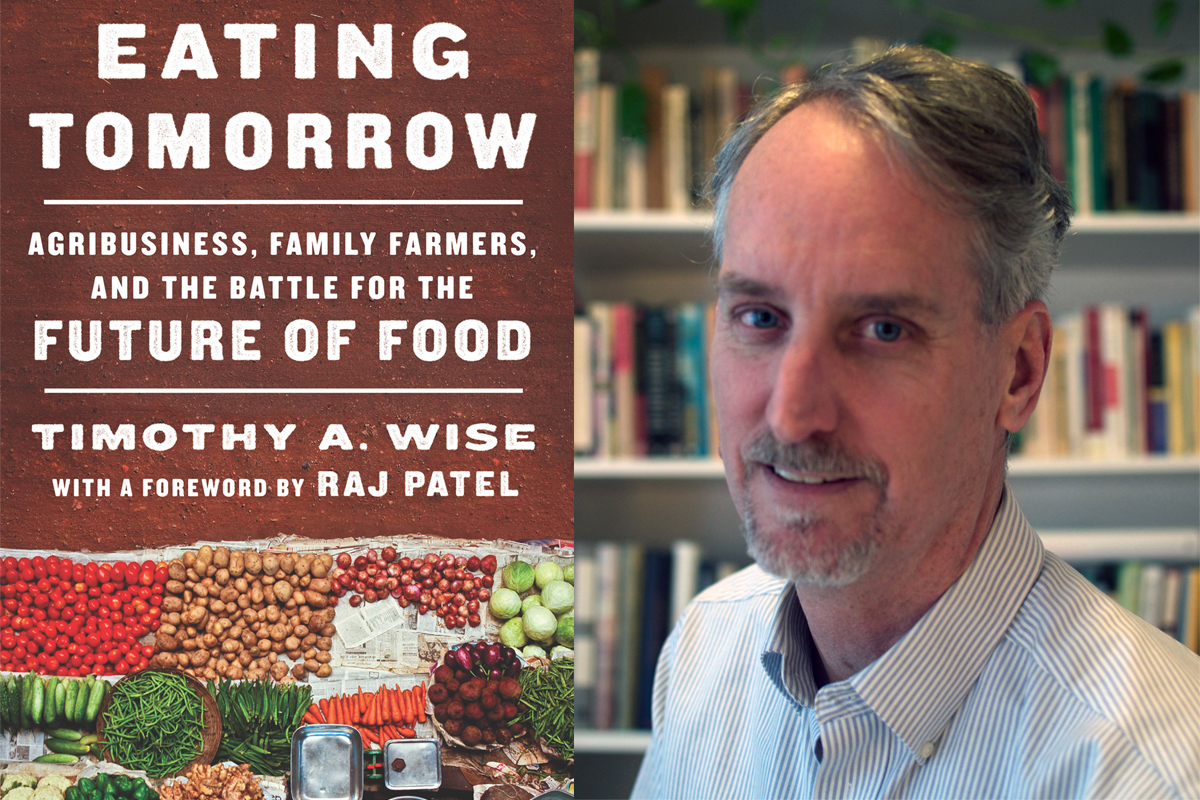 From remote villages in Malawi, Mexico, and India to ethanol refineries and industrial hog factories in the American heartland, Tim Wise has spent great deal of the last several years thinking about the big picture of food and farming.

As both the director of the Land and Food Rights Program at the Small Planet Institute and a research fellow at the Global Development and Environment Institute at Tufts University, Wise has for years been thinking and writing about food and farm policies, trade, and agricultural development in the U.S. and across the globe. In his new book, Eating Tomorrow: Agribusiness, Family Farmers, and the Battle for the Future of Food, Wise explores the ways in which U.S. food and agricultural policies can distort global markets and impact communities around the world.

“Agribusiness companies have such a powerful hold in the United States that they have convinced policy-makers and the general public—and even many farmers—that their interests are completely aligned with those of farmers,” Wise said. “Nothing could be further from the truth.”

Civil Eats recently spoke with Wise about his new book and the policy solutions that could support small-scale farmers, the environment, and food security of the world’s poor.

You write that the roots of our global agricultural problems are epitomized by Iowa and the “cornification” of the United States. Why Iowa?

I had seen in my travels through southern Africa, India, and Mexico that [pesticide- and fertilizer-] intensive agriculture was failing to increase productivity in a way that could rebuild depleted soils, make small farms more resilient to climate change, or reduce rural hunger. I wanted to understand where that model came from, and Iowa seemed to have it all: vast expanses of corn and soybeans dotted with an occasional hog farm or ethanol refinery.

There was scarcely a farmer in sight, never mind what one might call a vibrant rural community. Iowa has a system that everyone claims is “feeding the world,” with high productivity feeding export markets. But family farmers are struggling with low prices from that overproduction, and contract farmers are heavily exploited. Meanwhile, neighbors complain of air pollution and the stench of manure lagoons, and the excess nutrients and chemicals [running off] from farms are polluting the water.

This did not seem to be working well for most Iowans. It certainly wasn’t working in Africa and Mexico. Yet somehow this was the model of agriculture our government, the Bill and Melinda Gates Foundation, and Iowa’s own World Food Prize were promoting as the solution to feeding a “hot, crowded, hungry world.” It was very hard to find any significant way in which growing more Iowa soybeans would help feed hungry people in southern Africa. Maybe some cheaper pork for the meat-eating middle class in China, but not for hungry Africans.

You focus heavily on the state’s diversion of large quantities of corn into the ethanol market—what are some of the ripple effects of this biofuel expansion?

People forget that the expansion of U.S. corn ethanol, under the stimuli of the 2005 and 2007 Renewable Fuel Acts, was the most important driver of the food price spikes we saw in 2007-8. In a very short time period, we saw some 15 percent of global corn production diverted out of food and feed markets and into fuel tanks. It was a demand shock to the system.

In Iowa, the impact was to take hundreds of thousands of acres out of the Conservation Reserve Program as farmers rushed to cash in. That only exacerbated the state’s water pollution problems. Farmers planted every inch they could, right up to the edge of waterways, eliminating the [buffer zones] that helped filter runoff. It is not coincidence that the “dead zone” in the Gulf of Mexico has now reached record size. It is ironic indeed that the deadly mess flows south under the cargoes of corn and soybeans being shipped to Mexico and other destinations.

In Mexico, Guatemala, and other countries, the U.S. biofuel boom produced food riots when prices spiked. It also dramatically increased the cost of imports, on which these countries had become heavily dependent thanks to NAFTA and other trade agreements. Suddenly what had looked like a “cheap-food” policy was anything but. Beyond the price impacts, biofuel demand dramatically increased the demand for land. As I saw in many developing countries, much of what came to be known as “land-grabbing” was to produce biofuel crops.

What are some other ways the U.S. government can impact food and agricultural policies in other countries?

The U.S. government has been actively pushing an agricultural modernization agenda for decades. Such Reagan-style “free-market fundamentalism” has reigned supreme in international policy.

Malawi was pressured to sell off its national seed company, which was bought eventually by Monsanto. That actually took highly productive corn seeds off the market in favor of less-productive patented varieties. Currently the U.S. and other donor governments are advocating seed policies across Africa that favor commercial crop breeders and threaten to penalize farmers for saving, exchanging, or selling their own seeds.

A chapter of my book deals with the hypocritical U.S. challenge in the World Trade Organization (WTO) to India’s remarkable National Food Security Act, which is intended to help feed some 800 million Indians. U.S. trade negotiators claim India is unfairly subsidizing its farmers by paying above-market prices so it can distribute the goods to the poor. Let that sink in: The U.S. is blaming a developing country for unfairly subsidizing its farmers, even though India’s program is modeled on U.S. policies coming out of the Great Depression.

What do you make of the new NAFTA (the U.S.-Mexico-Canada Agreement)?

The new NAFTA does virtually nothing for farmers in the U.S., except maybe open a small window for more dairy exports to Canada. That looks particularly foolish to family dairy farmers in the U.S., with our dairy prices so low that calls to Farm Aid’s farmer hotline increased by 30 percent to deal with the distress in farm country. Canada’s program, unlike ours, manages supply to meet demand and keeps prices profitable for farmers, which is why some U.S. farmers said we should not be undermining Canada’s supply-management program, we should be emulating it.

My main focus has been on impacts in Mexico, and the new NAFTA does nothing to address longstanding demands from farmers there for “a new NAFTA or no NAFTA.” Since NAFTA was implemented in 1994, the U.S. has exported corn, soybeans, wheat, and other agricultural commodities to Mexico at very low prices, in many years at prices below what it cost farmers to produce them. That is a definition of “dumping” at the WTO. And it has devastated the Mexican countryside. My research showed that in the 15 years after NAFTA [was signed], U.S. corn exports increased more than 400 percent, prices were 19 percent below the costs of production, and producer prices in Mexico fell a stunning 66 percent. The impact was rural poverty, displacement, and migration. Their government needs the right to protect them from agricultural dumping.

You point out that these national and international policies largely favor an agribusiness-driven approach for food production—why is that?

I honestly had hope coming out of the 2007-8 food price increases that they would serve as a wake-up call to donor governments and foundations to shift policies to favor small-scale farmers and support more sustainable farming practices. Indeed, in international forums like the U.N. Food and Agriculture Organization (FAO), the narrative did change. But agribusiness hijacked the policy agenda. I saw it everywhere I traveled. And the Gates Foundation deserves much of the blame for such technology-driven policies.

The foundation started its agricultural development programs in 2006 with their Alliance for a Green Revolution in Africa (AGRA). That became the ready-made, one-size-fits-all answer to the post-food-crisis question: How can Africans grow more of their own food? Answer: commercial seeds and synthetic fertilizer.

Bad answer. Government subsidies, through “input subsidy programs,” quickly gobbled up many African governments’ new budget allocations for agricultural development. Donor governments and the Gates Foundation bankrolled market-based, pro-private sector projects across Africa, making them an attractive decision for cash-strapped governments. It has been a failure, even on its own terms. There is little evidence of a Green Revolution in Africa; rural hunger is as bad as it was before in many places. Farmers are rarely better off. But the seed and fertilizer companies reap the benefits from programs that create artificial demand for their products.

Worst of all, governments are ignoring low-cost solutions offered by innovative, ecological farmers all around them. That is the real tragedy, that so much money is being wasted while promising initiatives remain small, isolated, and without support. The FAO has called for “scaling up agroecology,” and that’s precisely what donors should focus on.

What are the central obstacles to changing this dominant vision for the future of food, and how could civil society better organize to take back democracies from corporate influence?

Frances Moore Lappé, Diet for a Small Planet author and my colleague at the Small Planet Institute, has shifted her focus to precisely that question. There is no doubt we in the U.S. need a vibrant democracy movement to back initiatives such as those included in H.R.1, a comprehensive set of pro-democracy reforms introduced by House Democrats this year.

For agriculture, I think several reforms are priorities. Renewed anti-trust enforcement is needed in light of the recent wave of agribusiness mergers, which hamper the competitive function of markets. That hurts farmers in the U.S. and farmers in Malawi, too.

Many people have highlighted the decline in public funding for agricultural research, which leaves universities dependent on corporate money. The Green New Deal proposals should incorporate a robust agricultural reform agenda, which can be based on the widespread benefits to farmers and the general public of incentivizing farming practices that conserve soil and reduce carbon emissions.

Ultimately, for those policies to be effective, we also need aggressive policies to get farmers to reduce the overproduction of agricultural commodities, as well as policies that can address industrial agriculture’s growing burden on soil, water, climate, and our natural wealth.