The University of Kentucky’s Long Road to Sourcing ‘Local’ Food

Some 20 percent of the school’s dining service contract is earmarked for “local” food. But when Coca-Cola ended up receiving a hefty portion of the early funding, an uproar and a renewed focus ensued. 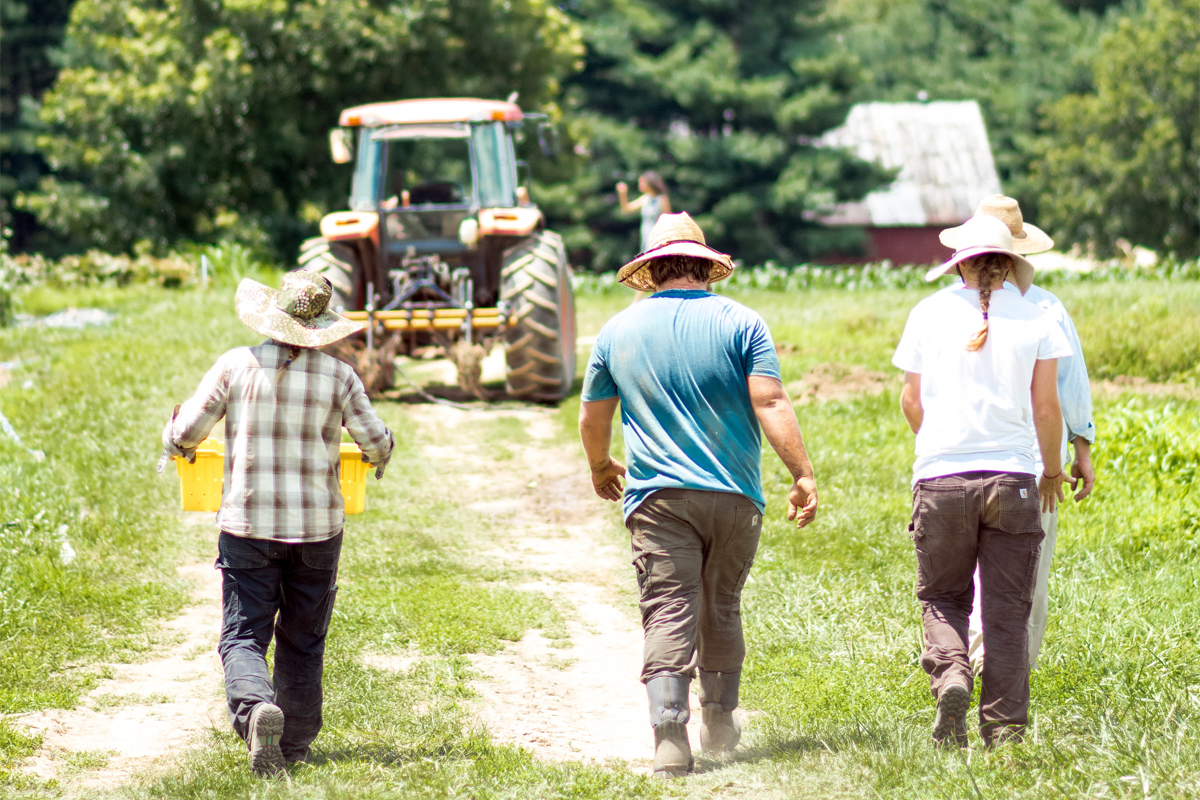 Nine years ago, Robert Eversole, a clinical lab manager, and his husband, Thomas Sargent, decided to turn their quarter-acre garden into a farm. They researched best practices, formed an LLC, and took the plunge, using the community supported agriculture (CSA) model as their template.

By 2015, their operation, Crooked Row Farm, was growing more than 60 kinds of fruits and vegetables—from strawberries to celtuce to Jerusalem artichokes—on two acres in Lexington, Kentucky. “It takes a lot to keep CSA customers happy,” Eversole explains. And with the vagaries of climate change making crop failures “a given,” he says, the couple was glad for the chance to understand the ins and outs of their land. 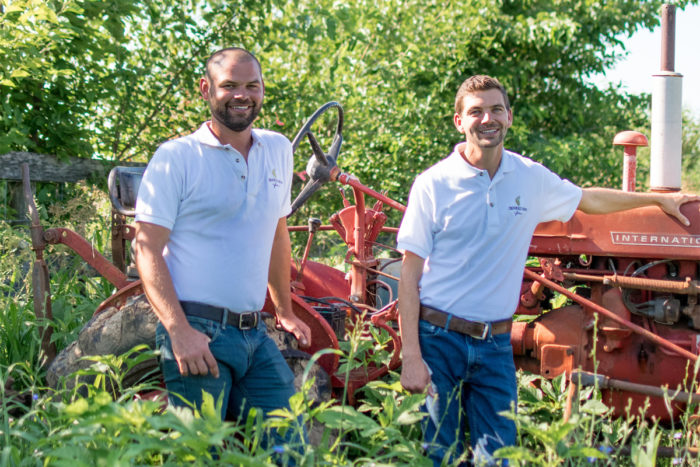 By 2016, they were both working on the farm full time and ready for “a pivot” and a little more security, says Eversole. They joined a food hub in Cincinnati and became one of six small Kentucky farms sending fresh vegetables to the dining halls at the University of Kentucky (UK) in Lexington through the large food service company Aramark. The university had hired Aramark in 2014 to provide its 2.2 million annual student meals with a contract that mandated that about 20 percent of sourced food come from local producers.

Although many institutions—from the University of Vermont’s Medical Center to Head Start preschools in San Diego—have begun sourcing food from nearby farms over the last decade, the word “local” doesn’t always have a globally agreed-upon meaning. Case in point: In August of 2015, the Lexington Herald-Leader reported that Aramark had spent nearly half its first year’s local food budget for UK on Coca-Cola beverages; a bottling plant in Lexington allowed the order to qualify under the terms of the contract—a carry-over from when UK ran its own food operation.

At the time, the news “caused letters to the editor and all hell broke loose,” says Louisville-based food consultant Sarah Fritschner, whose job then, paid by a fund overseen by the Kentucky Agricultural Development Board (KADB), was to increase the amount of Kentucky-grown food served across the state, including at institutions like UK.

Out of that outcry was born an important renegotiation between UK and Aramark, in an effort to more rigorously define “local.” In truth, however, this work began 20 years earlier, among a broader coalition of partners bent on building the infrastructure for a food system that would support farmers all across the state of Kentucky.

The Beginnings of Local Sourcing—and a Formalized Commitment

UK is a land grant university with a robust agriculture program and strong ties to central Kentucky’s farmers—many of whom send their sons and daughters there to study. When it handled its own dining services in-house, the arrangement included local food purchases and also gave ag students the opportunity to learn from UK chefs how to do things like make sausage. “That was integral to their complete education,” says Fritschner.

When UK started looking to outsource its dining in 2013, Fritschner says, ag students and faculty, farmers, and other community members protested. That’s because most institutional food service contracts are closed-circuit monoliths. They reward large-scale distributors by purchasing from them exclusively, taking minimum purchase rebates—which Fritschner says are “reputed to be worth more than the institutional contract” itself—in return. 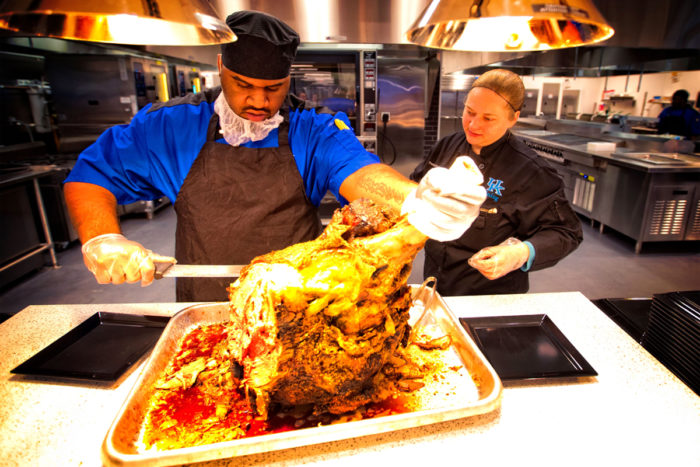 Such a contract often limits the number of distributors that can supply an institution like UK and, says Fritschner, “it freezes farmers out”—farmers like Eversole and Sargent, and others who were already supplying UK with beef and pork. The ag faculty was also worried that the contract would bring an end to their collaborations with UK chefs.

The clamor was acute enough that “I believe it made someone, somewhere, more attentive,” says Fritschner. As a result, the contract UK eventually hashed out with Aramark mandated that a certain percent of the budget (currently at 18 percent and incrementally increasing to 20 percent) be earmarked for food grown or processed in Fayette and six contiguous counties—with a penalty paid to the university for non-compliance.

The contract also helped fund an on-campus center called The Food Connection. Among other things, the center, with a fulltime staff of four, sends out its extension agent to help farms like Crooked Row get Good Agricultural Practices (GAP) safety audits, so they can sell their produce to food hubs—then onward to the likes of Aramark.

Without this kind of “co-op approach to aggregation,” says Eversole, access to large outlets like Aramark—which guarantees him income from about 70 pounds of crops a week in season—“is off limits to small- and medium-sized farmers.”

In 2014, there were only six USDA GAP-audited farms in Kentucky, according to Food Connection executive director Lilian Brislen, making this service essential to the success of UK and Aramark’s local commitment, as well as to Fritschner’s, to expand the impact of local food.

Today, 30 farms are audited. Six of them supply UK’s salad bars with 24,000 pounds of fresh vegetables per year, including baby kale, romaine, bok choy, cherry tomatoes, and carrots. An additional 35,000 pounds of produce from another six local farms goes into UK’s soups and sauces.

Hashing Out the Meaning of “Local”

While the Real Food Challenge has been working to shift budgets at universities toward more “community-based” foods, and the Bon Appétit Management Company committed to local sourcing in 1999, more cynical permutations of “local” have emerged. Frito-Lay caught flak in 2009 for its “Lay’s Local” tracking tool, which critics said was intended to fool consumers into believing they were supporting small local farms. In 2016, the Tampa Bay Times reported on the falsehood behind the farm-to-table claims of a slew of area restaurants. 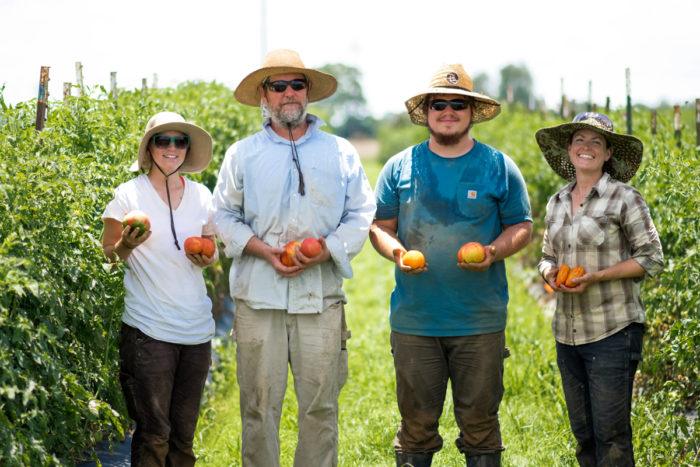 Aramark’s interpretation of “local” was not an attempt to deceive or mislead UK, according to numerous sourcees. But there were some early, known challenges to fulfilling the terms of its contract with the university in a way that satisfied the most stringent definition of the word. Farms in Kentucky weren’t just un-audited. In a state that before 1999 generated about 25 percent of its agricultural income from tobacco, many small farmers were inexperienced with growing produce.

The Master Settlement Agreement against the cigarette companies in part helped precipitate a drop in the number of farms raising tobacco from 60,000 to roughly 4,000 today, but getting other crops on the market has taken time. Few farms raised enough produce to sell wholesale, according to KADB’s deputy executive director Bill McCloskey. And they were unwilling to commit to the task without knowing they had a market.

But before these challenges, and their practical implications to the UK dining contract, could be fully addressed, the proverbial manure hit the fan, in the form of the Coca-Cola furor. After that, says Brislen of Food Connection, “Everyone came back to the table and said, ‘How can we better refine this to meet our shared goals’” of increasing locally grown, and healthy, food purchases? 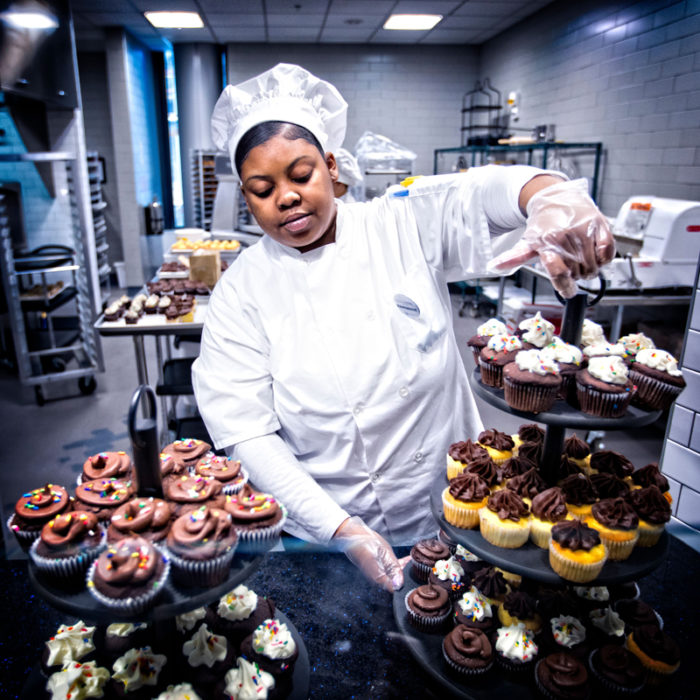 A UK Dining employee fills the pastry station at Champions Kitchen with cupcakes made from Kentucky’s Weisenberger Mill flour. (Photo courtesy of University of Kentucky)

Despite the slipperiness of the local definition, “There are a few key things that could be agreed upon by everyone,” says Aramark sustainability manager Carolyn Gahn, who now oversees purchasing for the UK account. “Less fuel to get there, reduced food waste, that connection eaters have with the source of their food, and economic development for the community.”

UK’s salad bar program came a couple of years after this renegotiation. So did its whole animal program, for which 57,000 pounds of cattle and hogs are sourced from 18 Kentucky producers. This was enabled in no small part by KADB, which grants money from the Master Settlement Agreement— $595 million and counting—to farmers’ markets, farmers’ greenhouse purchases, and food consultants like Fritschner, to help wean the state off its dependence on tobacco revenue.

Kentucky ranchers have traditionally sent their cows to the Midwest for finishing, but truly “local” meat has to be locally raised and processed. This means facilities for that must exist in-state, and until recently, there weren’t many of them. KADB has at least partially funded a number of slaughterhouses, including one for Marksbury Farm, which last year began sourcing Global Animal Welfare-certified step 4 whole animals for UK.

Even here they faced a hurdle. Purchasing whole animals is cheaper than buying just chops or ribs, because a farmer isn’t left with steaks and loins to sell separately. However, says Marksbury partner Preston Correll, “The various possible permutations of dividing a carcass into cuts [for UK] was a logistical nightmare.” He devised a better way: dividing varieties of cuts into specialty boxes, marked for roasting, grilling, and smoking. This also encourages UK chefs to be more creative, says Brislen—a win for everyone.

Four years into UK’s 20-year contract with Aramark, many of the farmers, aggregators, and other entities who’ve helped grow Kentucky’s local food economy up around the university are elated about what they’ve accomplished. 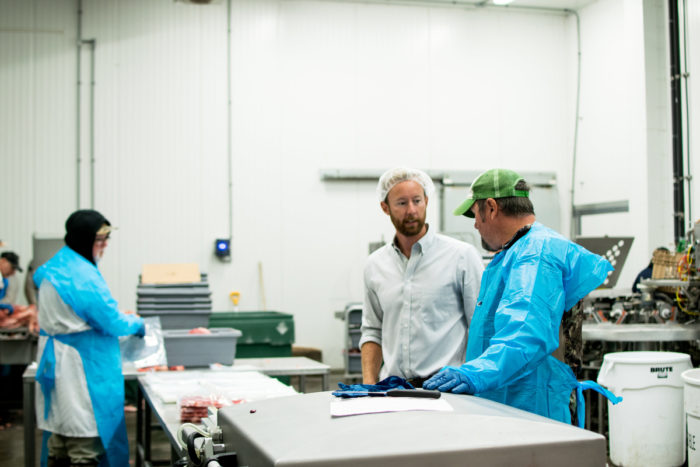 According to Aramark’s Gahn, the University of Louisville, Morehead State University, and both Eastern and Western Kentucky universities have expressed interest in adding more local food to their dining programs. Figuring out how to make that easier and more cost-effective for them is next on the agenda.

“There’s a value proposition beyond the bottom line—an expectation of quality and a commitment to the communities that we serve,” Brislen says. “Hopefully, that will become the norm for institutional dining.”