As sea levels rise, saltwater is entering farms near the bay, damaging crops and releasing legacy nutrients into already-polluted waterways. 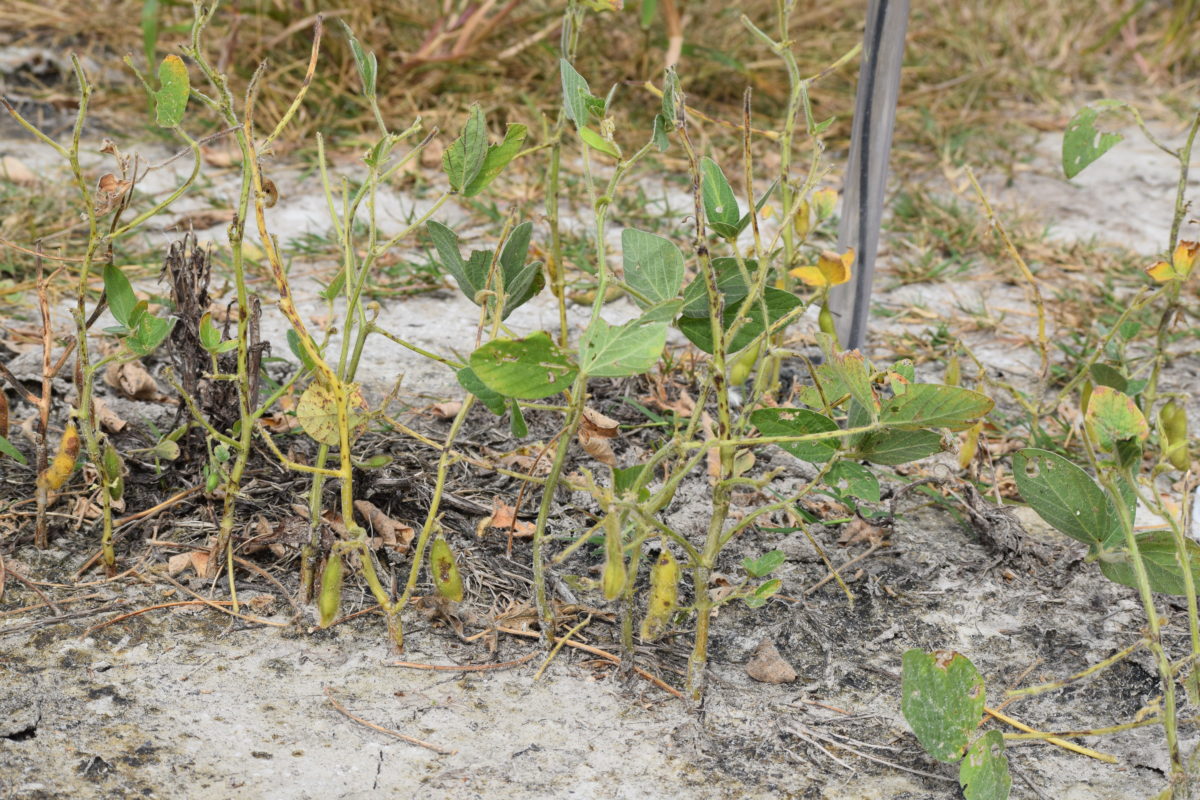 Kate Tully has spent the last few years sampling farm soils, ditch water, and marsh muck on Maryland’s lower eastern shore. Tully, an agroecologist at the University of Maryland, is tracking saltwater intrusion in the area, or the degree to which salt water from the nearby Chesapeake Bay has moved inland to compromise groundwater and soil. As sea levels in this region are expected to rise as much as two feet by 2050, she has found that saltwater may also be helping to unleash farm nutrients such as nitrogen and phosphorous that have been locked in the soil.

The Chesapeake Bay is so choked with agricultural pollution that lawmakers have agreed on a mandate to reduce nutrient runoff that spans six states. And yet, poultry farmers on the eastern shore produce almost 2 million pounds of chicken annually, making it one of the top poultry-producing areas in the United States. That steady supply of manure has been a cheap, plentiful source of fertilizer since the 1920s, so many farmers have applied it to their fields for decades. But there’s more manure on some fields than crops can absorb, and the resulting runoff has triggered algae blooms and a massive dead zone.

Tully is one of several scientists who recently published a study about saltwater’s impact on so-called “legacy nutrients.” And it could complicate the already confounding efforts underway to clean the bay—efforts now at Code Red status due, in part, to lax EPA enforcement.

As sea levels rise and saltwater seeps onto the nation’s oldest farms, it alters the chemistry of the soil, making nitrogen and phosphorus soluble. These legacy nutrients are then mobilized and poised for release into waterways during extreme rain events, which could make the pollution in Chesapeake Bay even worse.

“We see accumulations of nitrogen and phosphorus in marshes that are downstream from agriculture,” adds Tully. From the marshes, these nutrients have quick path to the bay.

Tully’s findings suggest that marshes could play a key role in the region. Unfortunately, the region’s existing marshes are disappearing due to rising sea levels. Letting marshes migrate onto salt-impacted farms provides a trap for nutrients, slowing their spill into waterways, and providing a barrier able to protect farm fields from saltwater intrusion. If the goal is to protect the waterways, first “we need to protect these marshes, which may be our last line of defense,” she adds. 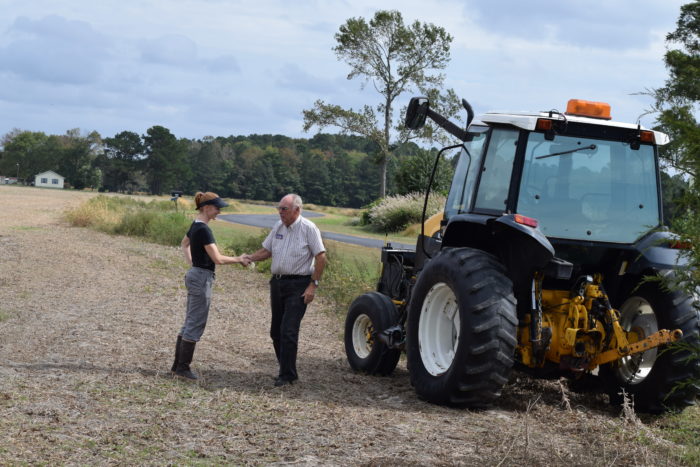 The shift won’t be easy, however. It will take farmer compensation and technical support to prevent invasive species from encroaching on land. And while existing conservation programs aim to prevent nutrient runoff, they were not designed to facilitate turning abandoned farm fields into marshland.

While poultry production has been a mainstay of agriculture on the eastern shore, improving waterfowl habitat offers a way to prevent salt damage, mitigate nutrient runoff, and help keep farmlands productive.

In 2017, the U.S. Department of Agriculture’s Natural Resource Conservation Service (NRCS) began an initiative that pays landowners to create American black duck habitat. The goal is to bolster the declining waterfowl’s wintering populations in the Chesapeake and Delaware Bays. The ducks live in both salt marsh and freshwater marsh. NRCS biologist Steve Strano and colleagues have begun reaching out to landowners along marshland about creating a freshwater wetland impoundment that could also allow the marshes to migrate. A handful of farmers have expressed interest so far.

Strano’s agency has been trying to increase wetland restoration acres for decades and had secured most of the “low hanging fruit.” Now, Strano says the Black Duck habitat initiative may be an opportunity to encourage people who are starting to see the saltwater impacts on their cropland.

There are several conservation programs that pay farmers to take marginal farmland out of production—such as the Conservation Reserve Enhancement Program (CREP) and the Environmental Quality Incentives Program (EQIP). However, “the wetland easement program is probably best suited [to allow for marsh migration] because once you take these lands out of production, there is no reason to put them back into production,” says Strano.

While CREP contracts provide farmers who restore wetlands with annual payments of 200 percent of the soil rental rate for 10-15 years, they are reversible. The Black Duck habitat initiative’s permanent easement on cropland, first offered in 1995, offer a one-time payment of $4000-5000 per acre with no out-of-pocket costs to do wetland restoration—and provide perhaps the best opportunity to buy other land to farm on.

Marshlands are of increasing importance to environmental groups as well. In addition to providing wildlife habitat and a “sink” for nutrients, they also are excellent places to store carbon. For that reason, the ongoing loss of marshlands is a triple threat; it leads to loss of habitat, release of carbon, and increased nutrient loads in open water, says Jessica Hammond, conservation coordinator for the non-profit Chesapeake Conservancy.

Hammond says new easement programs or financial structures need to be created to recognize the multiple benefits of migrating wetlands onto existing farms. “We need to find solutions that provide farmers with alternatives,” says Hammond. “This [funding] will let us reframe the situation so it’s an easier decision for farmers to pull land out of production before it’s too late, without hurting their bottom line.”

While there is interest, says Strano, “it’s not at the point that everybody’s knocking on our doors to enroll.” It’s a big decision. “This is a permanent retirement of that land,” he adds.

Farm fields impacted by salt are typically close to drainage ditches meant to send excess water into the Chesapeake Bay. “Oftentimes, these fields may not grow a perfect crop, but farmers will get something off those acres,” says Don Webster, a farmer and waterfowl-habitat specialist with the Maryland Department of Natural.“If [a field] goes off an agricultural land map, it’s gone forever,” says Webster. “Once it becomes tidal marsh or wetland vegetation, you are talking about an [Army] Corps of Engineers jurisdiction to do anything else with it down the road.”

Saltwater intrusion, poor drainage and rising water levels forced farmer Bob Fitzgerald to give up on 15 acres of row crop fields that he’s farmed for 30 years. “It was better to give up on it instead of wasting seed and chemicals,” he says. “If you dig a ditch to drain land that is drowning under seawater at high tides, all you do is let saltwater in and that speeds the process of salt damage,” he says.

The chair of the Somerset County Soil Conservation District, Fitzgerald estimates that, over the last few decades, around 7,000 once-farmed acres in Somerset County have been taken out of agriculture. Down the road from Fitzgerald’s farm, two landowners spent their own funds to convert dozens of acres of former farmland into freshwater duck habitat. “I can’t believe how much things have changed in the past five years,” says Fitzgerald. 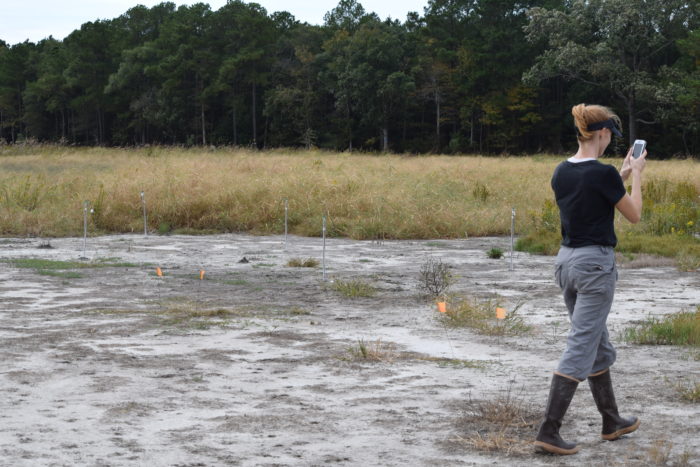 Most farmers, however, can’t afford to give up acreage. “A lot of people just hate to give up. They’ve been farming all their lives,” says Fitzgerald. “They see where this land isn’t going to work, but they keep trying.” Still, he thinks people would jump at conservation dollars earmarked specifically to turn unfarmable fields into marshes or duck habitat. “If they’re getting anything for that land, that’s something.”

Striking a Balance with Manure

Jennie Schmidt wants to see farmers stay financially viable while protecting the bay. She wasn’t aware of the black duck initiative, but agrees that farmers will be interested in any program that offers a decent offset for losses, even of low production land—and the technical assistance to install a marsh correctly. “Many non-farmers think you just stop farming [from farming] and let it go”, says Schmidt, but that’s not the case.  For example, it’s important to prevent invasive, non-native salt-tolerant weeds, called phragmites, from taking over.

Schmidt farms 2,000 acres 60 miles north of Somerset County. At 80 feet above sea level, her operation isn’t at immediate risk of saltwater intrusion. “We need those conservation dollars to encourage farmers to take poorly productive land in sensitive, low-lying areas out of production for the greater good,” she says.

While poultry litter has gotten a bad reputation, she notes, it plays a valuable role on the eastern shore. Poultry manure has been one of the cheapest, most effective ways to add organic matter and nutrients necessary to keep these coastal plains soils productive. Yet efforts to transport poultry manure out of the region—last year, a record-setting 249,421 tons—have made it difficult for her to continue building up organic matter on her no-till farm. Schmidt points out that only 1 percent of farm fields are banned from applying phosphorous fertilizer; while 18 percent of farms will have to use new tools to evaluate their risk.

“We’ve been doing no-till and cover crops on these sandy coastal plain soils for 55 years, and we’ve built our organic matter up to 2 percent,” she says. “We buy litter from whatever poultry farm we can get it from.”

Tully laments that farms have largely disintegrated animals from crops, which has caused nutrient imbalances in both industries. “In general, it’s good to be using manure on fields, not chemical fertilizers,” she says. But that makes it all the more important that steps are taken to keep nutrients where they can improve soils and not harm waterways. Given that saltwater intrusion poses an additional threat to that balance, “we need to plan corridors for marsh migration,” says Tully.