The long-awaited policy proposal from Alexandria Ocasio-Cortez and Ed Markey has finally surfaced—and it aims to turn U.S. agriculture into a positive force for climate change and social justice. 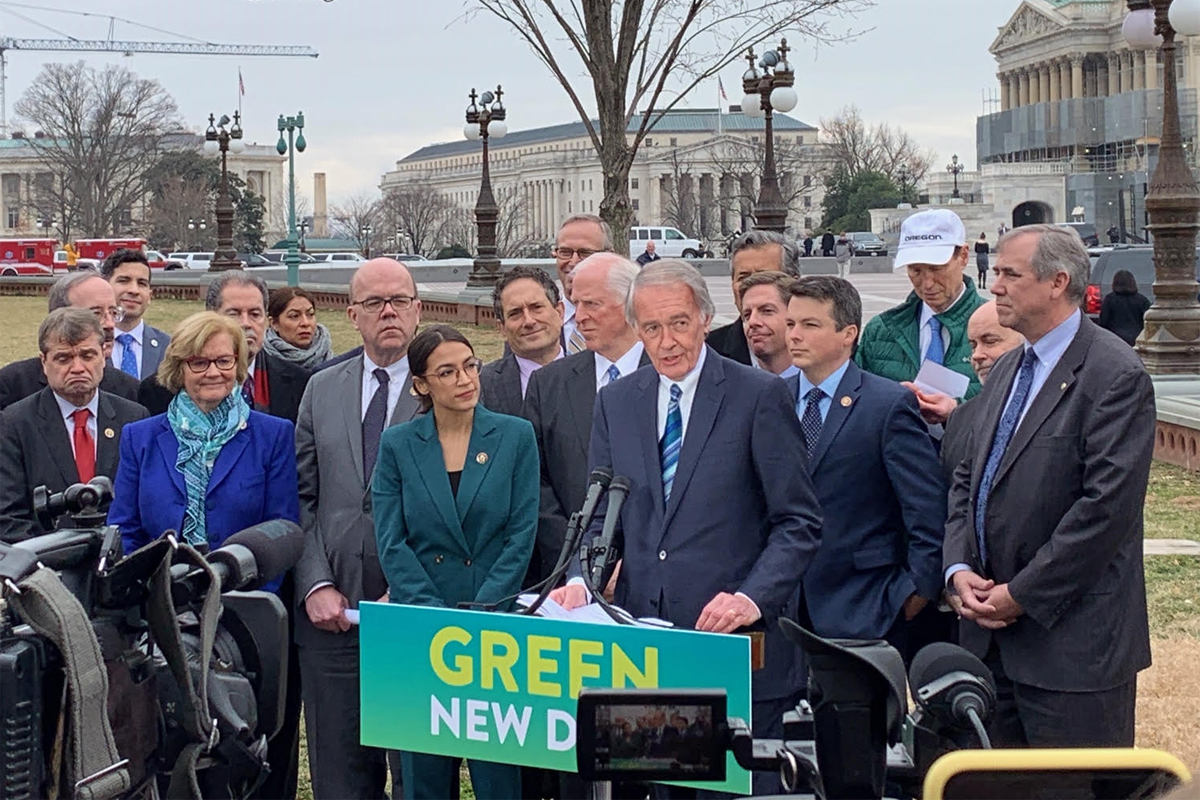 Today, Representative Alexandria Ocasio-Cortez (D-NY) and Senator Ed Markey (D-MA) released their much-anticipated Green New Deal with the goal of creating millions of jobs by expanding renewable energy and de-carbonizing the economy over the next 10 years.

It’s a sweeping attempt to reorient energy production and shift public resources in an urgent bid to make the U.S. carbon-neutral by 2030. And it comes at a crucial moment, as dire scientific evidence shows the world needs to act fast over the next 12 years to avert the worst impacts of climate change.

Food and agriculture, which is responsible for 9 percent of the country’s greenhouse gas emissions, is included in several aspects of the 14-page House Resolution released by Ocasio-Cortez today. Primarily, the resolution notes the importance of “working collaboratively with farmers and ranchers in the United States to eliminate pollution and greenhouse gas emissions from the agricultural sector” through  supporting family farming; “investing in sustainable farming and land use practices that increase soil health”; and “building a more sustainable food system that ensures universal access to healthy food.”

The need for a food-system overhaul also gets a shout-out in the closing line of the resolution, which notes that the projects required by a Green New Deal will include “providing all people of the United States with … access to clean water, clean air, healthy and affordable food, and nature.”

Agriculture’s presence in the Green New Deal is the result of a palpable urgency that has emerged in food and farming movements to make sure that the effort not only reduces industrial agriculture’s massive carbon emissions, but also transforms a host of environmental problems and inequities embedded in how America’s food is produced.

“The Green New Deal sets a bold vision for dealing with the climate change crisis, which will soon escalate into a full-blown disaster if we don’t make the kinds of changes outlined in this plan. There are many good ideas in this resolution, but this is just the first step in the process,” Representative Chellie Pingree (D-ME) said in a statement to Civil Eats. “There is a lot of work to be done in the days ahead to iron out the details, like opportunities to work with farmers to trap more carbon in the soil. But I’m confident that we can pass something in the House and send it to the Senate, because the American people have demanded action.”

Sustainable agriculture advocates have been urging the food movement to “get behind the Green New Deal” and support major reforms of America’s food and farming system. Over 100 scientists, researchers, and other food systems experts have also signed onto a letter to that effect penned by the Agroecology Research-Action Collective. The future they envision puts U.S. agriculture at the center of the action on climate.

“We need stop the industrial overproduction of food—the root cause of agricultural pollution, food waste and greenhouse gas emissions,” argues Eric Holt-Giménez, executive director of Food First. One step in this direction would be supply management and guaranteed minimum prices for farmers, Holt-Giménez says—what’s known in the farming world as “parity” pricing. He says this type of minimum wage for farmers could stabilize many struggling small growers while discouraging the culture of “get big or get out.” “This way, we eliminate food waste and resource waste at the point of production, capture carbon, and ensure decent livelihoods for farmers and farm workers,” he adds.

Many advocates argue that America’s food system is ripe for a comprehensive overhaul toward sustainability and equity. Today’s meat and dairy operations emit millions of tons of climate-altering methane and nitrous oxide gases, while vast corn and soy farms rely on fossil fuel-based pesticides and synthetic fertilizers to grow livestock feed and auto fuel. This system is propped up by more than $13 billion a year in subsidies and crop insurance, while small farmers receive minimal support and no guarantee of a fair price in an increasingly concentrated, anti-competitive market; more than 12,000 farmers go out of business each year. Large-scale farms receive ample backing, while public monies for organic, regenerative, and small-scale diversified farming are minimal. This food chain depends on low-wage, often undocumented workers.

“There is a renewed energy to think big, and we need to apply this thinking to reforming our food system.” Rep. Earl Blumenauer (D-OR) told Civil Eats by email. A Green New Deal, he added, “could implement some incredibly common-sense provisions to reduce the climate impacts of farming, like improving and doubling the funding for existing conservation programs.”

The resolution introduced on February 7th certainly describes a revolution in how the economy operates, and whom it benefits. But in order for that vision to become reality, the legislation that follows will need to be equally ambitious, if it’s to begin turning the ship around on our nation’s approach agriculture.

To that end, Rep. Blumenauer plans to reintroduce his Food and Farm Act, a sweeping alternative farm bill that proposes, among other things, to “help producers adapt to a changing and unpredictable climate and increase resiliency to climate change impacts, including rising temperatures and extreme weather events, while reducing greenhouse gas emissions.”

Senator Jeff Merkley (D-OR) is also preparing Green New Deal legislation, according to spokesperson Martina McLennan. Merkley plans to fight for a measure that “provides incentives, technical assistance, and funding to support low-carbon farming, water and soil conservation, and sustainable agriculture.” Despite ample scientific literature showing that producing less meat and dairy is central to tackling carbon emissions, any congressional challenge to the meat and dairy industries—powerful groups with massive lobbying might—will undoubtedly see pushback. The EPA has been prevented from reporting livestock emissions since 2008.

“I want to talk about the impact that concentrated animal feeding operations (CAFOs) have on the environment and what we can do to mitigate it,” said Blumenauer. “We shouldn’t be incentivizing them through programs like the Environmental Quality Incentives Program; we should be forcing them to pay for the damage they cause to the environment and public health.”

Given the December passage of a new farm bill that largely maintains support for industrial agriculture, and the general political gridlock in Washington, it will be an uphill push to secure a Green New Deal that includes major food system reforms. Proponents won’t just face resistance from the meat and dairy industries; entrenched interests in every aspect of the food system are likely to oppose sweeping changes.

However, Green New Deal proponents will face both the entrenched opposition in the Republican Party as well as obstacles within the Democratic Party. For instance, after Ocasio-Cortez pushed the issue to the forefront last December, Democratic leaders put a halt to her select committee idea, instead opting to revive a climate committee that lacked any legislative powers.

Democrats on the House Agriculture Committee did not return requests for comment by press time, but Rep. Collin Peterson, the Democratic chair of the committee, has also been downplaying the importance of climate action in the House. Peterson expressed his skepticism recently to reporters, asking, “What is our goal? Planting all those trees? I’m actually cutting down the forest,” he said, referring to a recent logging project on his Minnesota farmland.

The Green New Deal sponsors have been hearing from food and agriculture advocates, including Blumenauer, for the last several months. In January, Saikat Chakrabarti, chief of staff for Ocasio-Cortez, said: “Transitioning to sustainable, locally focused, ecologically responsible agriculture that drastically reduces greenhouse gases will be a crucial part of implementing a Green New Deal.”

Beyond immediate legislation, a cornucopia of food, farming, indigenous and climate justice groups are pushing to transform food production. Climate justice groups including the Indigenous Environment Network are backing a broader vision that incorporates food justice and sovereignty. A “just transition” must support community food sovereignty, the coalition argues, including “a restorative framework for indigenous-based policy reform in hunting, fishing and gathering rights and forestry, fisheries, rangeland, environmental conservation, health, agriculture, and rural and community development.”

In a letter sent to Ocasio-Cortez and other members of Congress, Holt-Giménez, Elizabeth Henderson of the Northeast Organic Farming Association, John Peck of Family Farm Defenders, and Professor Anthony Robert Pahnke of San Francisco State University, called for “a just transition” to a system that “promotes agroecological practices that build soil carbon, protect air and water quality, and enhance biodiversity.” A Green New Deal, they added, “must include policies that enable family farmers to remain viable on their own land,” while “guaranteeing a living wage for all those engaged in the food/farm system.”

Time and politics will tell how far the Green New Deal can go, as the long fight over food, land, and resources continues, and the climate survival clock keeps ticking.

Update: on February 7, the same day the resolution was announced, the New York Times reported that Speaker of the House Nancy Pelosi (D-CA) has “no plan to bring the resolution in its current form to the floor for a vote,”  according to a Pelosi aide.

Christopher D. Cook is an award-winning journalist whose writing also appears in the Los Angeles Times, Harper’s, Mother Jones, The Atlantic, The Nation, The Economist, and elsewhere. He is the author of Diet for a Dead Planet: Big Business and the Coming Food Crisis. Contact him through www.christopherdcook.com. Read more >