Farmers in Australia have innovated diverse, creative tools to fight herbicide-resistant weeds, which could provide a solution for U.S. farmers. 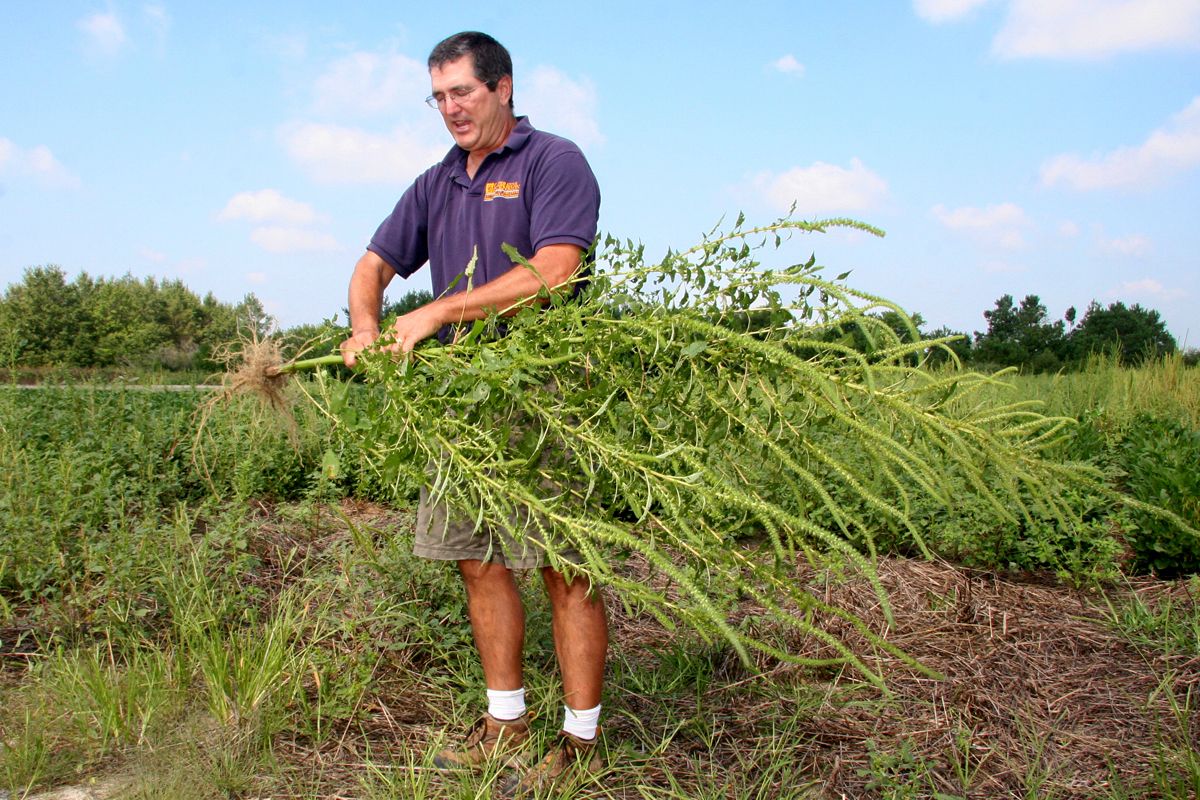 In December, C. Douglas “Bubba” Simmons III left his corn and soybean farm in northwest Mississippi to visit the dryland wheat fields in Western Australia, a region considered to be the herbicide resistance capital of the world. Plagued with unwelcome intruders such as annual ryegrass and wild radish that have evolved resistance to several herbicides, Australian farmers have been forced to develop new approaches to manage weeds—and their seeds. It hasn’t been easy. Farmers there are paying roughly 27 percent more per acre due to increased management and yield loss, according to Bayer.

Simmons visited several farms in the southern half of the state of Western Australia with three other U.S. farmers and a weed scientist. The trip was organized by United Soybean Board’s Take Action program in coordination with an Australian industry-led information campaign. Simmons, eager to learn from growers who have faced similar weed concerns, was inspired by Aussie ingenuity. It remains to be seen whether their mechanical and cultural solutions will work in the U.S., given Australia’s much drier landscape.

Yet, Simmons worries that U.S. farmers face a similar fate. “I think Mississippi might even be considered ground zero for the number of herbicide-resistant weeds we have,” he says. “It’s a constant battle from mid-March to mid-November.”

The long growing season and warmer climates in some parts of the South allow noxious weeds to thrive. But “superweeds” that refuse to die when sprayed with herbicides have been taking over crop land across the U.S. farm belt and beyond. Globally, 255 different weeds have developed resistance to 163 different herbicides, but the most concerning are the 43 that have developed resistance to glyphosate (the main chemical in the widely used weed killer Roundup). These weeds compete with crops for space, water, and nutrients in the soil—and they’re beginning to impact many farmers’ yields.

For decades, weed control has simply involved replacing one herbicide for another, which results in a phenomenon several weed scientists call the “treadmill of herbicide resistance.” So it’s no wonder that American farmers are looking elsewhere for clues as to how to rethink their approach to managing weeds.

“Farmers my age or older lived through the golden age of herbicide development,” says Simmons, describing the reliable production of new chemistries that has shaped his farming career. For 30 years, whenever new weed problems emerged, industry had a new chemical solution. But the well of new chemicals has been dry for some time. And growers are increasingly aware that there will be few, if any, effective new herbicides on the horizon for a variety of reasons.

First, companies have dramatically reduced efforts to discover new herbicides. Second, herbicides exploit plants’ molecular vulnerabilities, and the best target sites have likely already been discovered. There has been one recent announcement from chemical company FMC, which says it should have two new herbicides—one for rice and one for corn and soybeans—on the market in the next 5 to 10 years.

According to the International Survey of Herbicide Resistant Weeds, there are 17 glyphosate-resistant weeds in the U.S. Palmer amaranth, an aggressive pigweed that has devastated crops in the South and Midwest, is one of the worst. Each plant can produce at least 100,000 seeds, and, when left unchecked, they can grow to be taller than some people. 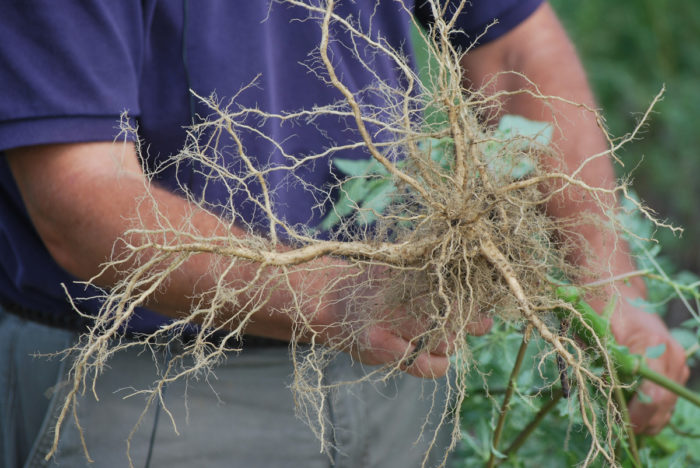 Estimates of the future costs of herbicide resistance in the U.S. are daunting. “It’s getting to the point where if farmers don’t deal with resistance, they will see major losses,” says Christy Sprague, a Michigan State University professor and weed extension specialist who also traveled to Australia. She and colleagues published a study that found that dry bean farmers in the U.S. could lose an average of 71 percent of their yield—or more than 2 billion pounds of beans and $622 million per year—if weeds are not controlled.

As Sprague and others see it, the fact that so many farmers exclusively use so much glyphosate for weed control has put tremendous selection pressure on the weeds. Introduced in the 1970s, glyphosate use had skyrocketed by 2006, when it was applied to 70 million acres of Roundup Ready soybean and roughly 35 million acres of Roundup Ready corn, varieties of which were introduced in the 1990s. It was only a matter of time until weeds would evolve resistance in the face of this widespread, repeated use—with little to no diversified weed management.

The Corn Belt monocrops have hastened weed resistance. “You could not design a cropping system better for the survival of weeds than the one we have here in Iowa, where all we grow is corn and soybeans,” says Iowa State University weed scientist, Bob Hartzler. “The only thing that has sustained that is herbicides, and now we’ve [unintentionally] selected for a few weeds that excel at developing resistance to new herbicides.” He foresees big problems.

Even as glyphosate is still used on a massive scale, companies including Bayer and Syngenta are developing genetically modified seeds designed to tolerate older, potentially more harmful, less environmentally friendly herbicides, including 2,4-D and dicamba, to tackle glyphosate-resistant weeds. (Update: The first confirmed case of Palmer Amaranth resistant to Dicamba and 2,4-D was found in Kansas in March, 2019.)

The Search for Solutions

No matter who you ask, one thing is clear: Weed control will undoubtedly require more management going forward.

“We really need to think about other methods,” says Sprague. It won’t be easy. Farms have gotten larger and larger, so it’s unclear what physical approaches can be incorporated into current farming systems. Cover crops also show promise in suppressing weeds, for example, University of Arkansas weed scientist Jason Norsworthy found that a cereal rye cover crop suppressed roughly 83 percent of palmer amaranth. But their use among farmers is only growing slowly.

A diverse crop rotation would greatly simplify our weed problems, says Hartzler. But in the U.S. Corn Belt, diversifying without an existing market for other crops is very difficult, and the majority of farmers have largely settled into the not-very-diverse corn-soybean rotation. “There’s just one problem—we’d need a crop that can be planted over 3 million acres,” he adds. Some point to crops like hemp as a way to add a rotation. However, Hartzler says the economics don’t work at this time for any other crops on a large enough scale to control weeds. 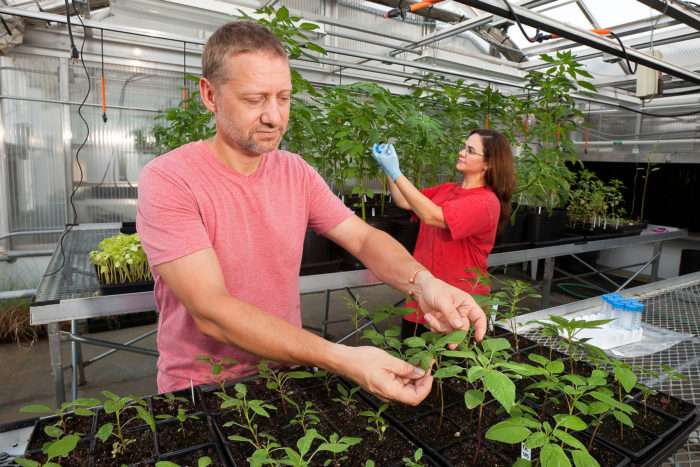 As the saying goes, necessity is the mother of invention. Farmers in western Australia had to come up with diverse, creative tools to fight herbicide-resistant weeds. Can some of these approaches be adopted by U.S. farmers? Possibly, but the farming systems have significant differences.

Western Australia is home to over 10 million acres of dryland wheat and barley operations, largely for export. Wheat alone generates U.S.$1.4-2.1 billion for the state of Western Australia. Farms there are larger than the average U.S. farm, anywhere from roughly 2,500 to 37,000 acres. Given the region’s low rainfall and resulting lack of alternative crops, Australians had to figure out a way to continue growing wheat after ryegrass weeds became a significant problem.

Dense weed growth can produce up to 45,000 seeds per square meter, and ryegrass quickly evolved to resist traditional herbicides. Over the last two decades, Australian farmers have developed a number of non-herbicidal strategies, both mechanical and cultural, to manage weeds during harvest.

“Our mantra—keep the weed seed bank as low as possible,” says Lisa Mayer, manager of the Australian Herbicide Resistance Initiative and WeedSmart at the University of Western Australia. In other words, control these seeds, and keep them from turning into new weeds. To that end, farmers have developed a number of approaches to catch and destroy the seeds. Some pile the wheat chaff into lines behind the combine, which can be collected or burned. They also use the Harrington Weed Seed Destructor, a device that pulverizes weed seeds as the grain is harvested.

These methods have proven to kill 95-99 percent of the annual weed seed produced. In combination with some herbicides, weed populations have been reduced to around 1 plant per square meter, which lowers the potential for resistance to evolve. Despite their successes, weed infestations still cost the Australian grains industry upwards of U.S.$2.3 billion in revenue losses and expenditures a year, which equates to roughly U.S.$146 an acre for grain growers, says Mayer.

Australian farmers have also tried to increase the competitiveness of their crops by experimenting with row spacing and higher planting densities. And they’re breeding crop varieties to be more competitive with weeds.

Mayer says Australian farmers only began to diversify their weed management practices when they had no other options. “It’s not the researchers who came up with tools to combat herbicide resistance,” says Mayer. “It’s the farmers, and it’s because they have long-term outlook.” The majority of Australian farmers own the land they crop, which is in contrast to the U.S., where a greater percentage of available cropping land is leased by farmers who the must produce a profitable crop and provide a return to the landowner, she says.

With few, if any, new herbicides on the horizon, “the U.S. is now hitting a wall—and beginning to take notice of non-herbicidal tools to add diversity to their cropping systems,” says Mayer.

Soon after Norsworthy made his own trip to Australia in February of 2013, he began experimenting with seed destruction, notably the Harrington Weed Seed Destructor, and burning weeds in the field. While burning was effective, it also brings drawbacks including polluting the air and losing some crop residue, which would otherwise add nutrients to the soil. Although an early prototype of the Harrington Seed Destructor struggled with the higher moisture of U.S. crops, Norsworthy and colleagues ultimately showed that it can be highly effective.

“If we can kill 97-99 percent of weed seeds coming through the combine, it would have a profound impact, eliminating up to 99 percent of herbicide selection pressure from that field,” says Norsworthy.

Those are promising numbers, but time is of the essence; Hartzler estimates that U.S. farmers could be in Australia’s shoes within 5 to 10 years. Norsworthy published a paper in which he introduced a single palmer amaranth plant into four different cotton fields, and sprayed nothing but glyphosate. Outcompeted by weeds, the crops failed in three years. “There’s not one silver bullet,” says Norsworthy. “If we are going to be successful long-term, we need [fewer weed seeds in the soil],” he says, adding, “it’s going to take herbicides, tillage at times, seed destruction, and cover crops.”

Hartzler agrees. “We’re telling farmers they have to take a step back and use things like mechanical weed control,” he says. The problem is that many farmers have reduced their tillage in recent decades to improve soil health and reduce erosion, and it’s difficult to rely on tillage since it’s at least five times faster to cover a field with a sprayer than a cultivator, adds Hartzler.

Simmons says the big takeaway he learned from his Australian counterparts was the need for farmers to help develop new tools for the fight against weeds. Despite the often-intense pressure to continue buying herbicides, Simmons says growers can’t continue as if there’s only a single tool in the toolbox. “Growers should bear more of the responsibility in tacking this problem, not rely solely on industry or researchers, but work with them to share the load,” says Simmons.

Update: This article was updated to correct the introduction date of Roundup, which was in the  1970s; Roundup Ready crops were first introduced in the 1990s.