Florida citrus growers say antibiotics are necessary to save their industry from the devastating effects of citrus greening. Consumer advocates say their use on crops is irresponsible.

In 1998, a tiny interloper was detected in the vast commercial orange groves that stretch for the endless flat, green miles of lower Florida. Called the Asian citrus psyllid (Diaphorina citri), the nailhead-sized pest delivers a double disservice as it munches a tree’s tender new shoots and leaves: It deforms foliage while also infecting its host with a fatal vascular bacterial disease called huanglongbing (HLB), also known as citrus greening. The disease’s presence was confirmed in Florida in 2005.

Known and battled for more than a century in its native China—its vector is thought to have arrived in this country on imported plants—HLB can take up to five years to incubate in citrus trees whose leaves have been nibbled by those psyllids. It stunts the tree and then kills it outright, causing salty, bitter fruit to drop long before ripening. HLB has turned up elsewhere—Brazil, Reunion Island in the Indian Ocean, and California (the psyllid has also been found in Hawaii but the disease has not yet been found there). But in Florida, where the orange juice industry is a dominant agricultural force, an estimated 100 percent of all mature commercial trees are presumed to be infected with the disease.

The state has tried and failed to eradicate HLB in the past, including by spraying the antibiotic oxytetracycline in 2016, ’17, and ’18. Nevertheless, in December, the U.S. Environmental Protection Agency (EPA) approved non-emergency spraying of oxytetracycline, a decision that could bring as much as 388,000 pounds of the antibiotic to Florida’s 480,000 citrus acres—and more, potentially, to citrus farms in states such as California, where the disease has so far been confined to backyard trees. 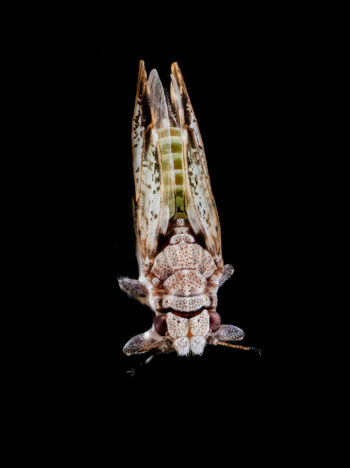 A citrus psyllid adult. (Photo by the USGS Bee Inventory and Monitoring Lab)

The EPA’s approval raises the question of whether staving off the collapse of a multi-billion-dollar industry is worth risking possible bacterial resistance to a medically important antibiotic for human use. (The EPA was not available for comment for this article due to the ongoing government shutdown.)

“This kind of spraying wildly is nutty,” says Consumer Reports’ senior scientist Michael Hansen. It’s “an irresponsible, dramatic expansion” of the drug’s use in plant agriculture. Oxytetracycline is also used, much less extensively, to treat fire blight on apple and pear trees, and bacterial spot on peaches and nectarines. “We already know that [overuse of] antibiotics are a huge risk in human health and [we’re] trying to reduce their use in animals,” says Hansen, where, despite the fact that they’re usually added to feed and water, the risk of environmental contamination is less extreme.

Some Florida citrus growers argue that treating trees with oxytetracycline, the active ingredient in FireLine—manufactured by a company called AgroSource, one of the companies behind the petition to the EPA—is a stopgap measure vital to saving their devastated industry. Florida citrus growers lost $1.7 billion in direct revenue between the years 2006 and 2011 (the industry has a total economic impact of $7.2 billion per year). The struggle to provide any relief from HLB is ongoing.

“Greening leads to biological death for the plant at some point, but it becomes commercially dead long before that,” explains Rick Dantzler, COO of the Citrus Research and Development Foundation in Lake Alfred, Florida, which is pumping money into HLB research—some of it attempting to eliminate or alter an increasingly pesticide-resistant psyllid, some of it earmarked for trying to produce a genetically modified cultivar. “Growers are just trying to hang on till a greening-resistant or -tolerant tree can be created.”

Ned Hancock, a farmer on whose Florida plantations suspected HLB-infected trees were found early on, says using antibiotics has lessened the fruit drop from some of his trees and improved their overall health. He knows the use of oxytetracycline is not a cure for HLB, but rather, “a short-term measure that gets us to the next step—and I have no idea what the next step is,” he says. “But we’re in a fight for our actual lives here.”

Hancock believes damage from Hurricane Irma in 2017 halted the rebound he’d begun seeing in his orchards after emergency antibiotic spraying in previous years, and also may have given HLB renewed vigor. Asked if he’s afraid of consumer backlash to the use of antibiotics in his industry, Hancock admits it’s a concern, but says that AgroSource has assured citrus growers that they’ve so far found no impact of antibiotic usage on wildlife or soil. 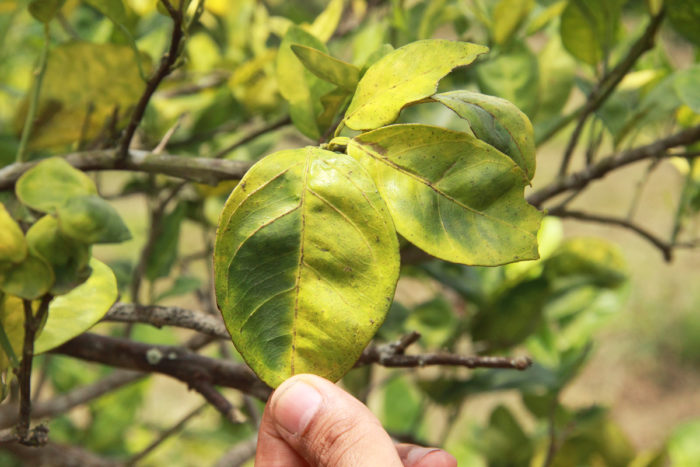 A citrus leaf infected with citrus greening or huanglongbing.

Consumer Reports’ Hansen disagrees with this assertion: “We already know what spraying will do to bees, since there’s good work showing antibiotics disrupt their gut microbes, making them more susceptible to [fatal] disease.” Furthermore, he says the EPA did not conduct adequate studies on the effects of oxytetracycline on soil microbes, field workers, or drinking water.

According to the EPA’s own Risk Assessment of the use of oxytetracycline, there’s a high probability that it could lead to antibiotic-resistant bacteria, and a medium concern that human health could be impacted. The U.S. Food and Drug Administration (FDA) requires monitoring for resistance when these drugs are used in livestock, but Steve Roach, food safety program director for Keep Antibiotics Working, says no such monitoring is being undertaken by the EPA: “There’s no requirement for fruit.”

Nathan Donley, senior scientist at the Center for Biological Diversity, calls the allowance “a lousy solution to a complex problem … that could end up causing more harm than good.” He points out that Brazil and the European Union have also battled HLB, and banned the use of antibiotics to treat it. The worst-case scenario, at least when it comes to human health, could be antibiotic resistance.

“The more you use antibiotics, the more likely it is that bacteria that are not affected will survive and multiply,” Donley explains. “The DNA that makes bacteria resistant can also move between species of bacteria. So, the worry is that bacteria that can cause human disease will develop resistance to these drugs and then they won’t work when we really need them to.”

Donley also says that studies show that when plants are treated with oxytetracycline, the drug can have an effect on levels of certain microbes in soil. “The potential for soil health degrading is there,” he says.

Still, he’s sympathetic to citrus growers and says that if the antibiotics actually saved the trees, “we’d be having a very different conversation right now.” The most oxytetracycline spraying can do is extend the life of the trees—but eventually, growers will be forced to destroy them, then replant. This may sound like a reasonable solution, but the average commercial orange tree takes five years before it starts “producing enough fruit to pay the rent,” says Dantzler.

Still, Consumer Reports’ Hansen says replanting is probably the best method for controlling the spread of the disease. In countries with antibiotic bans for citrus, he points out that the disease has been successfully controlled in this way, and also by using integrated pest management, in which parasitic insects such as wasps are introduced to eat the psyllids; these methods have all but eradicated the disease on Reunion Island. Dantzler points out that the USDA’s Farm Service Agency does offer monetary help to replant via its Tree Assistance Program but “it doesn’t come close to covering all the costs.”

Trapping and tenting new young trees with plastic covers have also been shown to be effective. The latter technique can effectively block the psyllid and raises the temperature under the tent to 120° Fahrenheit, which Hansen says kills the HLB bacterium. In fact, such control measures are what are available to the organic citrus industry in its own battle against HLB, as current standards disallow the use of antibiotics. 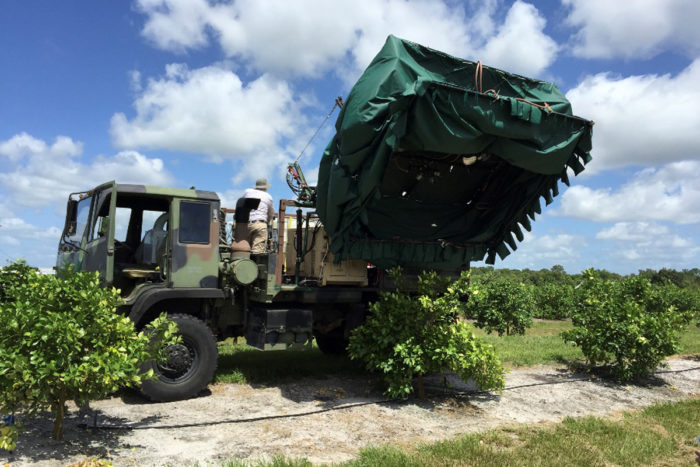 Thermotherapy trucks cover infected citrus trees with a canopy to heat treat them, significantly reducing the amount of disease in the trees and increasing their productivity. (Photo CC-licensed by the USDA)

Hansen believes that the U.S. citrus industry’s partial focus on genetic engineering is misguided. “Even if they find [a disease-resistant tree], how long before the bacteria evolves past the resistance?” he says.

Donley agrees, and points to larger, structural issues at play. “This greening outbreak is more of a symptom of the problem with growing crops in vast monocultures; we’re creating perfect conditions for outbreaks to occur,” he says. “With climate change, these things are going to get worse and if we keep growing crops this way, we’re inviting further disease and reliance on pesticides.”

Although the EPA has approved it, the Florida Department of Agriculture has yet to sign off on oxytetracyline’s approval; industry experts expect that to happen in February.

Update: This article has been updated to reflect the fact that the Asian citrus psyllid has been found in Hawaii, but the disease huanglongbing has not yet been discovered there.