Agrivoltaics: Solar Panels on Farms Could Be a Win-Win | Civil Eats

Agrivoltaics: Solar Panels on Farms Could Be a Win-Win

Massachusetts is leading the charge in dual-use solar installations, making it possible to grow some crops and pasture animals while generating clean energy. 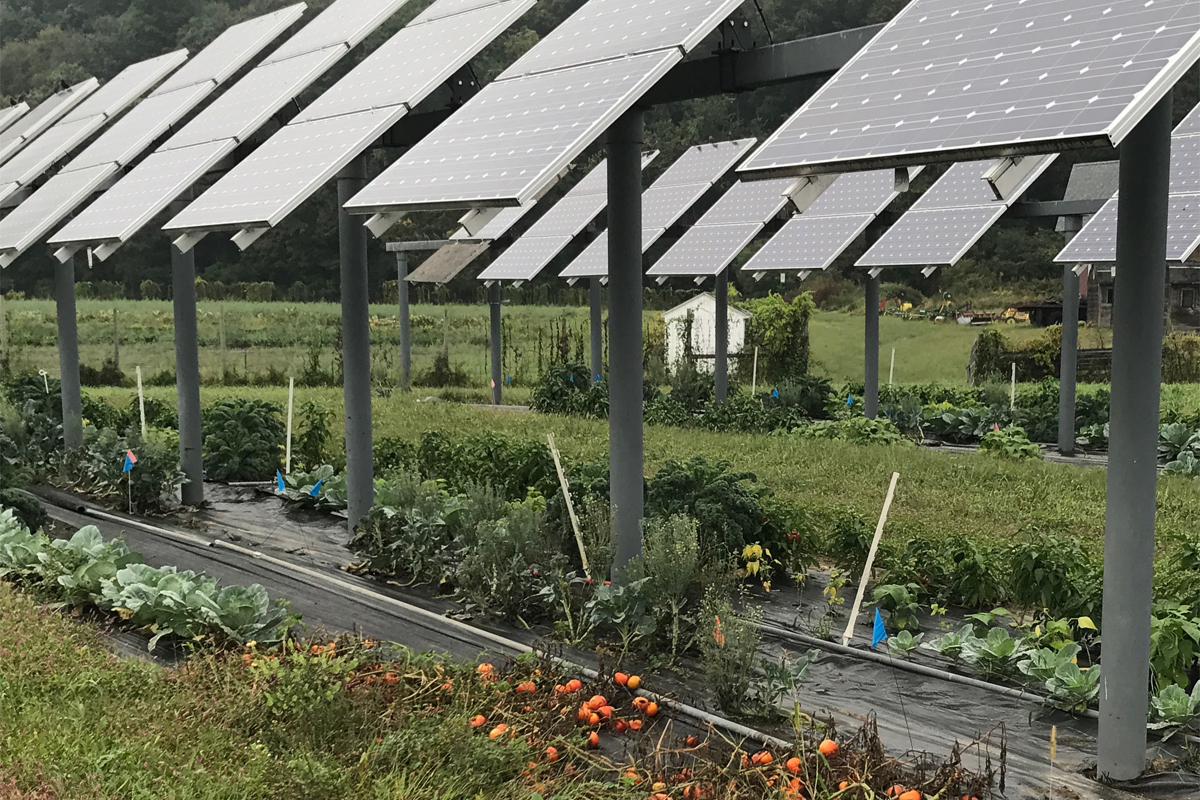 The solar panels in the fields at the University of Massachusetts Crop Research and Education Center don’t look like what most of us have come to expect. Instead of hunkering close to the earth, they’re mounted seven feet off the ground, with ample room for farmers or cows to wander underneath. Panels are separated by two- and three-foot gaps, instead of clustering tightly together. Light streams through these spaces and, underneath, rows of leafy kale and Brussels sprouts replace the typical bare earth or grass.

This unusual arrangement is one of the first examples of a dual-use solar installation—sometimes called agrivoltaics. It’s a photovoltaic array that’s raised far enough off the ground and spaced in such a way that some crops can still grow around and beneath the panels. The goal is to help farmers diversify their income through renewable energy generation, while keeping land in agricultural use and reducing greenhouse gas emissions.

“This would seem like a great thing—you get to farm and use the same exact space to generate money from solar production,” said Brad Mitchell, deputy executive director of the Massachusetts Farm Bureau Federation. “But it’s still in the early stages.”

The idea of producing solar energy and growing crops on the same land has been around for a while. Isolated demonstration and research installations are in place or planned in Arizona, Japan, and France. In recent years, however, the concept has become more attractive, as the price of photovoltaic panels has plummeted, interest in renewable energy has risen, and financial pressures on small farmers have grown. And because solar arrays often displace agriculture, causing tension between the two land uses, agrivoltaics is being seen as a potential win-win. 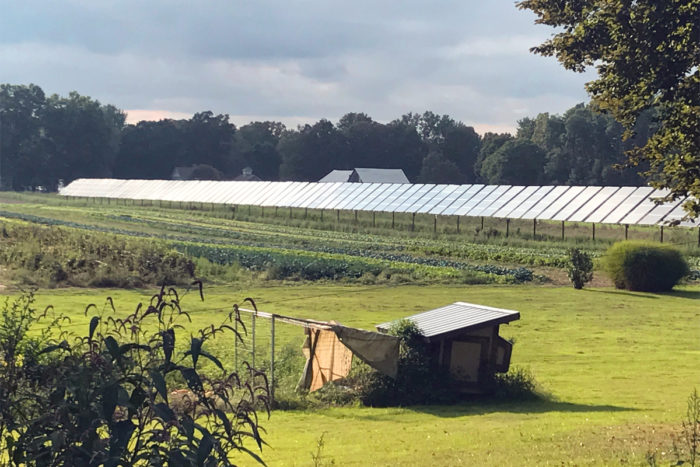 A dual-use solar array in Massachusetts.

Massachusetts is at the forefront of the push. The state’s ambitious renewable energy goals—current targets call for 3,600 megawatts of wind and solar capacity by the end of 2020, doubling the state’s current output of 1,800 megawatts—have created a surge of interest in developing solar projects, but the state’s high population density means that available land is scarce.

Furthermore, many local food advocates argue that an inadequate portion of the food consumed in Massachusetts is grown there. The short growing season along with high costs for labor and land can make farming in Massachusetts a financially precarious proposition. Some advocates say that dual-use solar installations have the potential to ease a number of these problems at once.

Traditionally, when solar developers turn to farmland for their projects, the property is leased or sold to the developer, the topsoil is stripped, and the panels are mounted on concrete footings embedded in the land. While the shift boosts renewable energy generation, it weakens the local food supply. Some counties have even started prohibiting large-scale solar developments on agricultural property as a way to preserve the land.

Dual-use developments are particularly suited to Massachusetts’ needs, and the state is seizing the opportunity. The UMass installation, a partnership between private solar company Hyperion Systems and the university, is home to a unique research project aimed at calculating exactly well how different crops fare when grown beneath raised panels. And the state’s new solar incentive program, known as Solar Massachusetts Renewable Target (SMART), offers extra compensation for dual-use projects.

“To our knowledge, no place else is doing what we’re doing,” said Michael Lehan, an advisor to Hyperion Systems.

The story of dual-use projects in Massachusetts dates to 2008, when construction company owner Dave Marley installed a solar array on the roof of his headquarters in Amherst and quickly decided he wanted to generate even more energy. As he started considering farmland as a location, Marley became determined to find a way to avoid interrupting the land’s agricultural use.

“He kept emphasizing, ‘I want to keep the land alive and well. I don’t want to cover up the land,’” said Gerald Palano, renewable energy coordinator for the Massachusetts Department of Agricultural Resources.

In 2009, Marley connected with researchers at UMass and in 2010 his vision became a reality with the construction of a 70-panel array at a research farm in South Deerfield, Massachusetts. The following year, Marley formed Hyperion Solar to pursue this new approach to renewable energy. Marley died in 2013, and his son James has taken over the business.

Today, the dual-use installation Dave Marley envisioned remains in place, advancing his goals. The lower ends of the panels are raised seven feet off the ground and rise to 15 feet in the air. They’re spaced far enough apart to allow sunlight to pass through to the field below and can be shifted horizontally to adjust the gap. The panels are supported by vertical poles embedded 10 feet into the ground. No concrete is used, so the damage to the soil is limited and completely reversible.

“What farmers really care about is the land,” Lehan said. “And there is minimum soil disruption.” 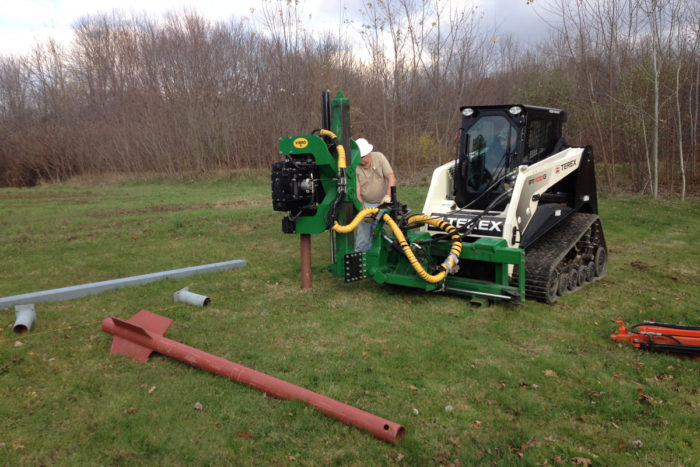 Installing the poles to mount a solar array.

Since the array came online in 2011, Stephen Herbert, professor of agronomy at UMass, has been studying the impact of the panels on crop growth. His results have been encouraging.

When he cultivated grass and other forage plants to support grazing cows, the land under the panels yielded more than 90 percent as much volume as land that received direct sun. For beef or dairy farmers, agrivoltaic arrays are a “no-brainer,” Hebert said, between bites of a fresh Brussels sprout he plucked from a stalk beneath a panel.

Early results suggest that, when grown under the panels, vegetables such as peppers, broccoli, and Swiss chard can produce about 60 percent of the volume they would in full sun. At the same time, a dual-use system offers about half the power-generation capacity per acre of a conventional installation, and the costs are higher.

However, while these systems offer less energy generation and lower crop productivity than solar panels or agriculture alone, the combination generally pays off.

Hyperion estimates that its dual-use installations pay for themselves in about eight years, under average conditions. State and federal grants can shorten that timeline.

To help accelerate the adoption of this new approach, Massachusetts is putting some money on the line. In November, the state launched the SMART program, which pays solar owners a fixed base rate for every kilowatt-hour of energy they generate. The amount they earn is then deducted from the cost of the electricity they draw from the grid when the panels aren’t producing enough power. If an owner produces more energy than they use, they can apply those credits to future bills. 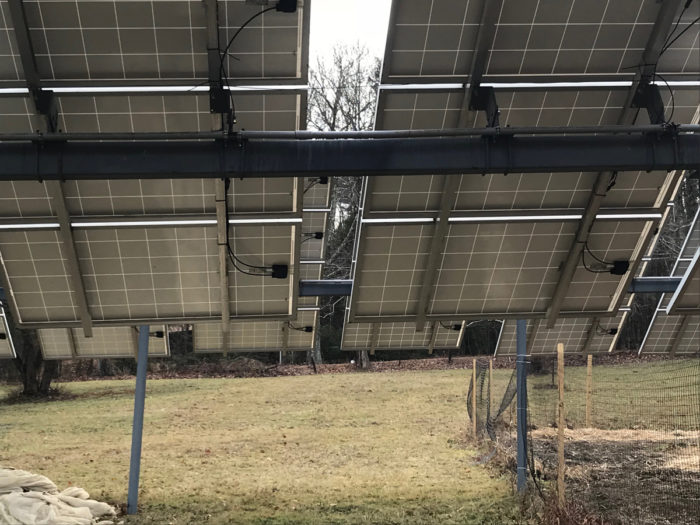 The underside of a dual-use solar array. The hardware used to mount the panels make it easy to reposition each panel to maximize the light needed to grow crops underneath.

Base rates for these solar installations range from 15 cents to 39 cents per kilowatt-hour, depending on the size and location of the development. Projects that combine solar panels with farming earn an extra 6 cents per kilowatt-hour. In practical terms, that means that a 1-megawatt system on agricultural land, with solar panels in fixed positions which could produce around 1.2 million kilowatt-hours of energy in a year, would earn an extra $72,000 toward an electric bill.

In the first six weeks of SMART, five applications proposed dual-use projects and another two have submitted pre-determination requests, an earlier step in the process. Several more developers have inquired about potential developments, Palano said. The proposed projects range from 249 kilowatts to 1.6 megawatts.

“We think the level of interest is there from large-scale developers and others but the concept is new, so they are needing to invest more time to better understand,” he said. “We’re happy to see the interest so far.”

Not every agricultural area will benefit from agrivoltaics. The added costs and effort might not make sense in a region that already has plenty of open, non-agricultural space to host solar arrays, for example.

In places like Massachusetts, however, Palano said the technology is only going to get better and more helpful. He’s already seeing interest in panels that move to follow the sun, maximizing their energy generation. He also expects growing interest in storage, essentially large batteries that can collect power and save it for use when the sun isn’t shining. The future may even include translucent panels that would let more light through to plants growing below, he added.

“We’re saying, ‘let’s see if we can get this to the next level,’” said Palano. “We’re looking forward to the innovation.”

Top photo: Tomatoes growing under solar panels at the University of Massachusetts. (All photos courtesy of Hyperion Systems.)