Mongolia, Cheese, and the Future of Dairy in the Era of Climate Change | Civil Eats

Mongolia, Cheese, and the Future of Dairy in the Era of Climate Change

Cheese and climate change are connected, and some of the current economic and environmental woes facing American dairy farmers are well-established in Central Asia. 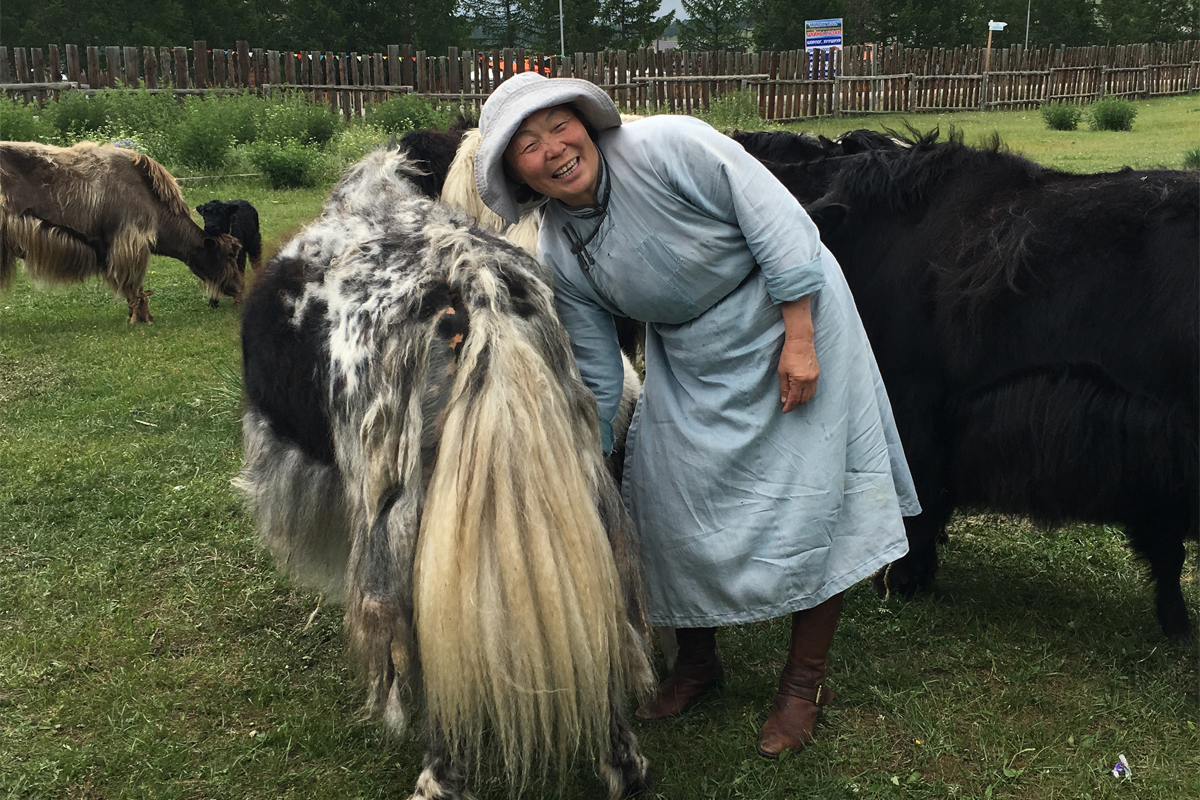 From coast to coast, American farmers are battling record-setting heat waves, fires, droughts, and excess rain. Partially deployed to calm grazing animals stressed by adverse weather, but also help stop, and even reverse, climate change, some dairy farmers are returning to 100 percent pasture-based diets for their animals by introducing innovative grazing techniques that they believe will help create happy cows and sequester carbon in the process.

Surprisingly, some researchers say the recent fate of nomadic dairy-herders in Mongolia may provide a chilling glimpse into the future of cheese in North America and Europe, if our production and consumption patterns don’t change.

The people of Mongolia have depended on dairy since about 3,000 BCE, when an early shift in the climate transformed the land from forest into grassland and desert, says Paul Kindstedt, author of Cheese and Culture: A History of Cheese and Its Place in Western Civilization, and a professor at the University of Vermont. Mongolia is one of the few pockets of the world that has carried out the same farming and herding practices on a large scale for thousands of years, he says.

Today, about 30 percent of the 3 million people living in Mongolia are nomads. They graze yak, cows, sheep, goats, horses, and camels in the world’s most sparsely populated nation, and they survive on the meat and dairy their herds produce. But their lives and livelihoods are at risk from climate change, compounded by political upheaval from the communist era. 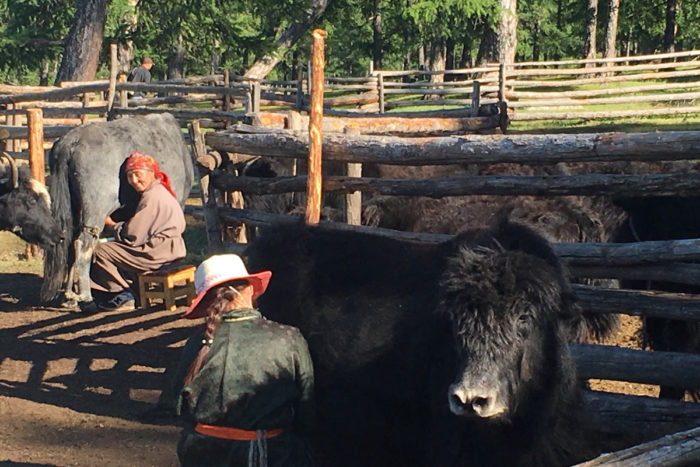 Milking in Mongolia. (Photo courtesy of the Khovsgol Dairy Project)

While many of the details differ, the U.S. dairy industry is undergoing an its own upheaval. Since 1991, small farms have been crowded out by large-scale producers, and a combination of politics, economics, and climate change is putting the future of small-scale U.S. dairy at risk.

What Mongolia Teaches Us About Climate Change

“Climate change has reshaped the Eurasian steppes repeatedly, and the people who lived there learned to adapt in a symbiotic fashion that benefited the landscape and the people,” Kindstedt says. “It’s a delicate dance, because if people use too many resources too quickly in an environment like that, it means certain death. Living nomadically with a limited number of animals on the grasslands was their only choice.”

While communism drove Mongolian people to the cities, its fall sent them back to their herding lifestyles. In the meantime, grazing had become much more intensified. Now, more than 65 million livestock graze the steppes of Mongolia, compared to about 23 million in the communist era. “Overgrazing has caused the degradation of pastureland, especially by goats, which have exploded in number because of the price goat cashmere brings abroad,” Kindstedt says.

With a stacked deck, re-minted nomads are playing against record-breaking extreme weather. This winter, temperatures dropped to -50º C, and hundreds of thousands of grazing animals died. (Known as Dzud, the lethal Mongolian winters have wiped out more than 20 million animals since the early 2000s). Despite extreme cold spells, average temperatures in Mongolia have climbed 2.2ºC since 1880, leading the nation’s environmental ministry to report that hundreds of rivers, lakes, and springs have dried up in recent years.

As a result, nomads have flooded back into Mongolia’s jam-packed capital of Ulaanbaatar, while Nomads who continue to herd and live on the steppes are facing drought, hunger, and even starvation.

Incredibly, most of the cheese available in Ulaanbaatar is still imported. “Requirements for sanitation, safety, and traceability creates steep barriers for many of these producers,” Kindstedt explains. “Think of how hard it is for an artisanal cheesemaker in Vermont to get distribution in metropolitan areas, and multiply that by a thousand.”

Until there’s a viable avenue for herders to get sustainably produced traditional Mongolian milk products to market, there’s no motivation to stay and battle the harsh elements of the steppes. 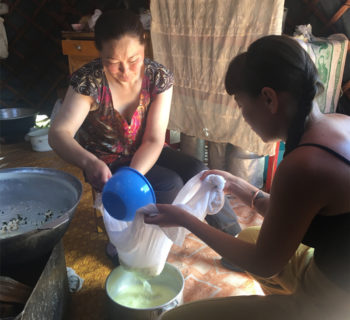 “The government is taking the crisis seriously, and working to establish a market for cheese, which they believe will help stabilize the grazing practices,” Kindstedt says. A planned cheese-making facility in the northern Mongolian village of Khatgal seeks to meet international standards for food safety and hygiene in order to send traditional Mongolian milk products into the global market. By making exports possible, Mongolian dairy farming could become a viable livelihood again, reversing the trend of urban migration.

Mongolia offers a stark example, to be sure. But does it really have implications for the way we produce (or buy) cheese in the U.S.?

Environmental groups have long warned consumers about the sizable carbon footprint of this popular food. And because it requires so much milk to make, and cows release methane into the atmosphere, cheese ranks just below meat from ruminant animals such as beef and lamb.

But there’s a growing consensus among farmers and scientists that cheese (and meat) production, managed responsibly, can be a part of the solution to the climate crisis.

This year is on pace to be the fourth-hottest on record, after 2015, 2016, and 2017. This summer has been nicknamed “the summer of fire” as flames raged across the country. This extreme weather is having a huge impact on dairy farmers, says Guy Jodarski, the supervising veterinarian for Organic Valley Co-Op.

“[Last summer] we had an extreme drought in the Pacific Northwest, and extreme heat in the Northeast. Cows are happy at 50 and 60 degrees. Ninety and 100, not so much,” Jodarski says. “I’m on the phone with farmers regularly discussing how to keep the animals healthy, unstressed, and cool.”

In his work with dairy farmers in 35 states, Jodarski has a bird’s-eye view of America’s rural landscape. And what he sees—in addition to the weather challenges—isn’t pretty.

“The upheaval I’m seeing in rural America sounds somewhat similar to what’s happening in Mongolia, to be honest,” says Jodarski. “In my lifetime, I’ve seen more than 90 percent of the dairies in Wisconsin shut down; people are just streaming out of towns to cities; high schools can’t field football teams; there are empty storefronts on our main streets.”

“Grass-fed organic dairy is inherently regenerative,” says Joseph, “because cows grazed on perennial pasture put the organic matter they produce—carbon—back in the soil.” Managed grazing can also help retain more water in the soil, making the land more resilient in the changing climate.

“Cheese was essentially created thousands of years ago in part as a response to … over-intensive agricultural practices,” says Kindstedt. “Neolithic humans began herding goats and sheep more intensely as they could survive on land unfit for crops. At the same time, we invented pottery, which we used to store milk and eventually, yogurt and cheese.” 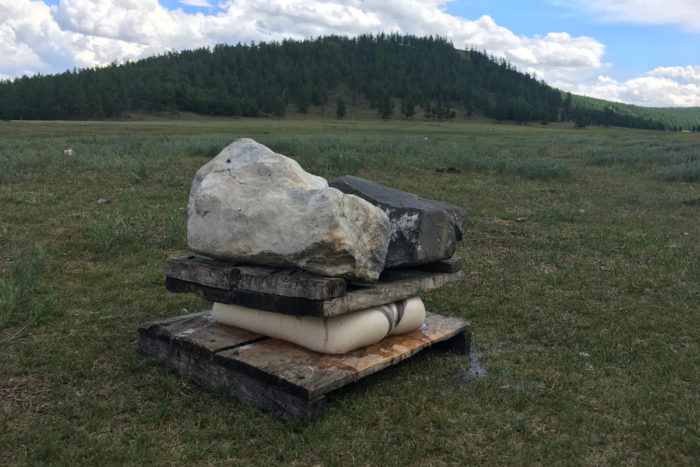 Pressing the cheese in a Mongolian field.

The culture of cheese-making was created by a man-made climate disaster, and now may be contributing to a second, potentially more catastrophic event. Unless we reverse course, Kindsted says.

“Masses of humanity in Western and sub-Saharan Africa have already been made desperate by climate change,” Kindstedt says. “Italy has shut its doors to the flow of migrants desperately fleeing their homes, and now they’re knocking on Spain’s door. And that’s just the tip of the iceberg if climate change continues.”

Cheese has a notoriously large carbon footprint, but it can be significantly offset by grass-fed, organic farming practices, Organic Valley’s Jodarksi explains.

“Grazing not only prevents soil erosion, but by walking around and tamping down dirt, the cows essentially sequester the carbon they emit through their burps back into the soil,” Jodarski says. “Their manure also gets spread across fields. You can get a net positive, especially when what they’re foraging on is high- quality grass.”

Milk and cheese from grass-fed cattle fetch higher prices that can keep family farmers afloat who have been squeezed out by the rise of Big Milk. And while a recent study found that sales of grass-fed dairy climbed 38 percent, stronger sales will accelerate the benefits.

In both countries, pasture-based practices might ensure a brighter future for cheese.

All photos courtesy of the Khovsgol Dairy Project.

Kathleen Willcox is a freelance writer focusing on food, spirits, travel and parenting, for a variety of local and national publications. Her work has appeared in Wine Searcher, VinePair, Spirited Biz, and Edible Capital District Magazine. Read more >